Two rainbow flags were planted in the ground as a group of LGBTQ activists gathered under the streetlights of the Wilshire Federal Building on Wednesday evening. It wasn’t the kind of place you would expect to see a public demonstration. Situated at one of the busiest intersections in the affluent Westwood neighborhood of Los Angeles, cars careened by while blaring their thunderous horns.

The protesters, who rallied in support of the dozens of queer people jailed in Egypt’s anti-LGBTQ crackdown, hope that their message is louder.

“This is the cradle for civilization asking for help right now, but nobody seems to be responding,” says Marina Eskander, an organizer with No Hate Egypt and Solidarity with Egypt LGBTQ. “You dress up like us for Halloween. You glamorize our pyramids.”

“You get to fetiishize and exoticize what we look like and sound like, but you have no clue what our country actually goes through,” she continues.

The Los Angeles protest is one of seven rallies planned in response to an unprecedented anti-LGBTQ backlash in the North African country, in which at least 70 people have been arrested. Organizers say that their goal is to bring awareness to the ongoing crisis: Weeks after police began arresting people at a Mashrou’ Leila concert on Sept. 22, activists tell INTO that more than 50 people remain in prison. 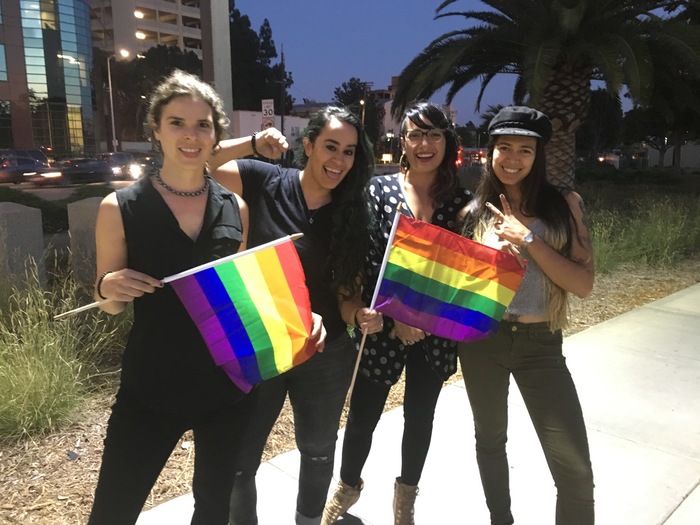 The crackdown began after photos of Mashrou’ Leila fans hoisting rainbow flags in support of the LGBTQ community were posted to social media. The lead singer of the Lebanese rock group, Hamed Sinno, is openly gay. Mashrou’ Leila was banned from performing in Jordan in 2016 due to its controversial lyrics, which openly discuss homosexuality in a region where the subject largely remains taboo.

Police responded to the display of solidarity by rounding up anyone identifiable in the photos. Although homosexuality is legal in Egypt, authorities charged detainees with violating an outmoded 1961 law on debauchery, which is often used to target sex workers.

Many of those arrested weren’t actually LGBTQ. A straight allywho attended the concert to support his friendswas one of the first to be apprehended.

“He became the face of it because he was the one who was most clearly holding the flag,” Eskander says. “The government is telling people that even supporting something we don’t agree with gives us the right to arrest you. It’s completely irrational.”

The reaction from local leaders and religious authorities has been both swift and relentless.

Following the Sept. 22 arrests, Cairo’s Al-Azhar mosque urged imams to condemn homosexuality in their Friday addresses to congregants. The Sunni religious authority vowed to “fortify youth against these deviant thoughts.” The Coptic Church in Egypt announced that it would be hosting a conference to combat the erupting “volcano of homosexuality.”

Egypt’s Supreme Council for Media Regulation subsequently banned the “appearance of homosexuals or their slogans in the media.” If news outlets were to feature an LGBTQ person, the regulatory body ruled that it would have to be in the context of repentance.

The continued arrests, activists say, have decimated the queer and trans community in Egypt.

Alfaghal, who moved to the United States last year, says that gay cafes are a fixture of LGBTQ life in Cairoa place to meet with friends and share a coffee. These critical safe havens have all but been shut down by the government following the raids. Even though they remain technically open, it’s no longer safe to go.

She adds that LGBTQ people are “becoming a trophy for police.”

“Police say: If you find a gay person, report them to us and we’ll take them down,” Alfaghal claims. “This is the situation now. This is how people think.”

Advocates claim that organizing is becoming difficult under increased government surveillance of social media. Eskander says that she was in a group chat on Facebook with Egyptian activists a few weeks ago when suddenly their profiles were removed from the platform. She assumed she had said something wrong until one of them called her to explain that they’re blocked on social media all the time.

Although the recent crackdown is the largest in the country’s history, the targeting of LGBTQ people isn’t unusual.

More than 200 people have been arrested for violating the debauchery law since 2014, Eskander claims. It’s common for police to strip detainees in public and force them to parade around. Other times authorities will arrest someone accused of homosexuality and call a female relative to come pick them up, as if their mother were coming to get them from school. The goal, she says, is “humiliation.”

“If you try to get a job or do anything after that, it’s in your record,” Eskander continues. “It follows you for life. You have to leave the country in order to survive.”

As many LGBTQ people flee Egypt in fear for their lives, Alfaghal says that it no longer resembles the country that she once knew. After the 2012 Arab Spring led to the removal of President Mohamed Morsi the following year, Cairo burst with rainbow displays: everything from Pride flags to graffiti beautifying the city.

But she claims that the rainbows have “always been here.”

Organizers with No Hate Egypt and Solidarity with Egypt LGBTQ will be rallying in six countries this week, including Germany, Italy, and the Netherlands. The final protest will be held on Saturday at the Egyptian Embassy in Ottawa, which is one of two events planned in Canada. They will also be fundraising to help those who were arrested afford legal representation.