More than 210,000 South Koreans have signed onto a petition lobbying for the cancellation of an LGBTQ Pride festival set to take place this weekend.

Friday marks the 19th anniversary of the Daegu Queer Culture Festival, a weeklong series of events. The festival includes over 100 booths from community organizations, film screenings, and art exhibitions, as well as a Pride parade.

The petitioners, however, labeled the proceedings as “perverse and obscene.”

“We do not want to see their abominable events in a square where we should be able to rest and relax,” said the entreaty, which was posted directly on President Moon Jae-in’s website. “Every year, queer-themed events such as street performances, drinking and smoking are called ‘cultural festivals,’ but they are just occasions filled with illegal acts and hypocrisy.”

“Homosexuals and normal people should not engage in such perverse and obscene events in a plaza that is meant to be a space for citizens to relax,” it continued. “True human rights are not indulgences.”

Because the petition crossed the 200,000-signature threshold in less than a month, the president’s office will be forced to respond. 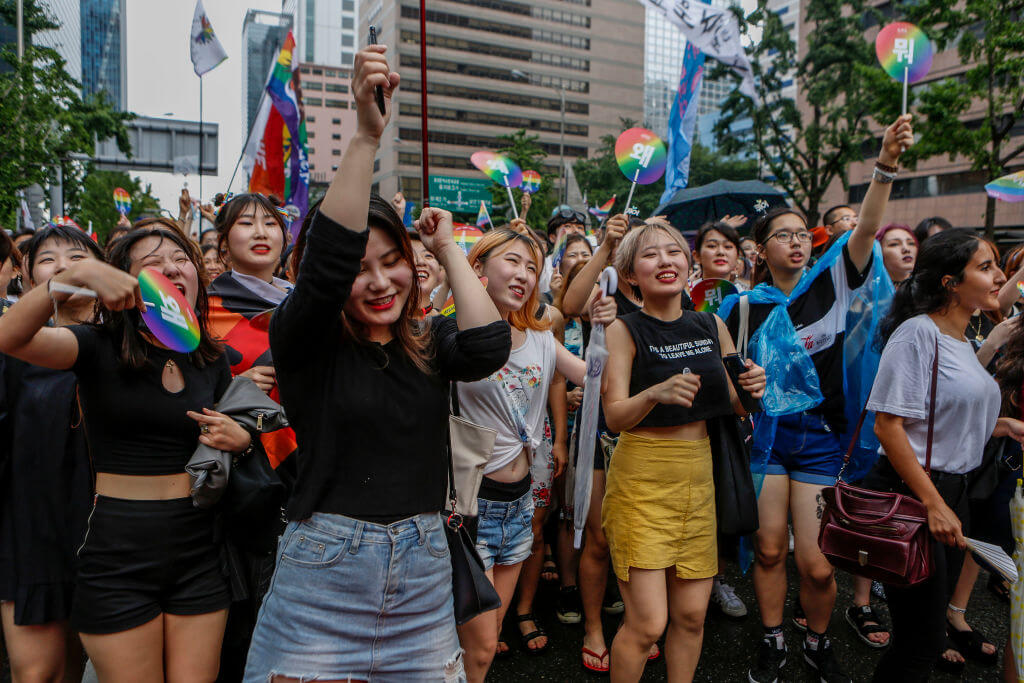 Although homosexuality is legal in South Korea, President Moon is no supporter of LGBTQ rights. During a televised presidential debate last year, Moon claimed that he opposed homosexuality and that the inclusion of gay soldiers is harmful to the nation’s armed forces.

When asked to confirm his views by his conservative opponent, Moon doubled down. “Of course,” he said.

Supporters of the current president say those remarks were made to appease religious groups in a country where progress on queer and trans equality has been slow. A 2017 survey from Gallup Korea found that 58 percent of South Koreans oppose same-sex marriage, while just 41 percent are in favor of the freedom to marry for all couples.

Meanwhile, sodomy remains illegal in the military, where those accused of same-sex intercourse can face up to a year in prison if convicted.

But in the face of challenges, Daegu Queer Culture Festival has grown in recent years. Although the police attempted to ban the Pride parade in 2015, attendance reached an all-time high just two years later — with more than 20,000 turning out for the events.

This year’s fest will include participating groups like the Jogye Buddhist Order, Korean Confederation of Trade Unions, Korean Teachers and Educational Workers’ Union and the Lawyers for a Democratic Society, as well as the National Human Rights Commission. The independent advocacy organization partnered with the Daegu Queer Culture Festival for the first time in 2017.

At least 10 foreign embassies will also be in attendance this weekend, including the United States.

Although President Moon’s government has yet to respond to the call to cancel the Daegu Queer Culture Festival, it’s likely to face vigorous counter-protest. When the festival went forward in 2015 despite the ban, right-wing Protestant groups swarmed the event while holding signs that said “Stop Same-Sex Marriage” and “Gays Out: Homosexuals Have No Human Rights.”