As was widely expected, a decisive majority of Australians cast a ballot in favor of legalizing same-sex unions in a nonbinding plebiscite whose results were announced on Nov. 15. An estimated 61 percent of voters approved marriage equality, while just 38 percent voted against marriage rights for all couples. That’s in line with Ireland’s successful plebiscite two years prior, when 62 percent of the country endorsed the freedom to marry.

Turnout was massive. At least 12.7 million peopleor 79.5 of Australia’s populationtook part in the postal ballot. That’s higher than last year’s Brexit vote in the United Kingdom or the 2016 U.S. election.

“Yes” supporters celebrated in raucous rallies across the nation. 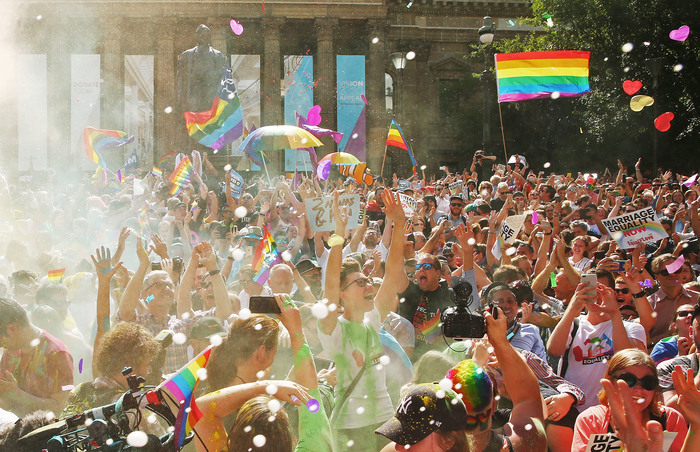 “Love has had a landslide victory,” Australian Marriage Equality co-chair Alex Greenwich told thousands of voters gathered in Sydney, who waved rainbow flags through teary eyes. “This is an unequivocal mandate to get in and get this done.”

“Today we celebrate, tomorrow we legislate,” Australian Labour Party leader Bill Shorten, one of the loudest voices in parliament in favor of same-sex unions, told a crowd in Melbourne. “What this shows is unconditional love always has the last word. It may have been 61 percent who voted ‘Yes,’ but you are 100 percent loved and valued, and as of the next few weeks in parliament, 100 percent able to marry the people you love.”

It’s now up to the legislature to take action. Because the vote is nonbinding, same-sex marriage doesn’t automatically become law. The Parliament takes the public’s vote as a recommendation and is tasked with introducing legislation to pass marriage equality accordingly.

Prime Minister Malcolm Turnbull has promised that marriage equality will become the law of the land by Christmas.

But conservative forces have vowed to not to support legislation that doesn’t offer what they view as sufficient protections for people with “relevant marriage beliefs.” Liberal Party MP Dean Smith hinted that he would introduce a marriage bill on Thursday, but George Christensen, a minister in the right-wing National Party, has already vowed to sit the vote out.

“If a bill comes forward that is deficient in protections for people of faith, conscientious objectors, and parents then I will abstain,” Christensen said in a statement.

The conservative MP threw his support behind a competing bill from Liberal minister James Paterson, one that LGBTQ advocates warn would allow sweeping and broad discrimination against same-sex couples.

The proposal would nullify existing nondiscrimination laws, allow parents to pull their children out of school if the curriculum teaches a definition of gender and sexuality that conflict with their faith beliefs, and allow caterers, bakers, florists, and other providers to refuse to service same-sex weddings. It also permits Kim Davis-style discrimination by allowing county clerks to decline to sign LGBTQ couples’ marriage licenses.

Turnbull has claimed that Paterson’s draft bill has no chance of becoming law.