Transgender eighth grader Albert Quill was on a field trip to Oakdale High School when it happened. The production was Shrek the Musical, and the auditorium was packed on April 18. Quill was there with other theater students. Gay-straight alliance students in the district had also come.

It was an enjoyable production, Quill felt. Then, things shifted.

“They made jokes about the wolf character, implying that he was trans but not accurately depicting it — like drag queen mixed with trans— and it used trans stereotypes to make a joke,” Quill recalled.

“It just feels uncomfortable to be around people who are transphobic and hear that sort of thing,” Quill said.

Throughout the district, parents of transgender kids got word of the play and started talking to each other. Facebook groups flooded with comments. Kids came home to their parents complaining.

Compounding that, teachers and students reported that the donkey had been played by a white student in blackface and the villain Lord Farquaad was assigned to a gay student and played in a way that was stereotypical and offensive.

Among those whose child would be impacted was Nicola Van Kuilenburg, whose transgender son James would be attending the musical the following evening. But unlike many parents who vocally objected to the performance, Van Kuilenburg’s objections got her fired.

That’s because Van Kuilenburg works for the Maryland State Education Association (MSEA), the union that represents many teachers. In firing her, the union claimed that Van Kuilenburg’s advocacy represented a conflict of interest.

But parents in the district and national LGBTQ advocates say that sends a chilling message to LGBTQ students and their parents.

Van Kuilenburg’s termination has national implications. Her advocacy in Frederick County launched her into the national spotlight last year. Some claim that activism made the district uncomfortable. Now, parents and LGBTQ advocates are calling for her to be reinstated.

The issue of trans rights in the Frederick County Public Schools District is fresh and painful for many. The district adopted a transgender policy last June for its 67 schools. The policy grants students use of the bathroom that aligns with their gender identity and mandates that trans students names and pronouns are respected.

At the center of the fight to pass that policy was James Van Kuilenburg, Nicola’s son. But implementing the policy wasn’t easy. A parent in the district sued to block the policy claiming it violated her 15-year-old daughter’s “fundamental right to bodily privacy.”

James fought to protect the policy in a motion to intervene filed by the American Civil Liberties Union. Also coming to bat for the policy was Van Kuilenburg’s employer, MSEA. The suit was ultimately dropped.

But the very public battle over the policy took a tremendous toll on some transgender students in the district, and some parents say the district has failed to follow through on the policy.

Wendy, a parent whose last name has been withheld to protect her trans child’s identity, says her child lobbied for the policy at his own peril. He experienced such intense backlash from adults that he felt unsafe staying in school. Months later, he has yet to return. And the anti-trans slur in the musical compounded Wendy’s fears and sent a message, she said, that the district will punish those who advocate for trans students.

“I was almost speechless,” she said. “How many kids were affected by this? What is the fallout in the long term?”

Kevin Lynn was also among the parents who objected to the play. His trans child attends Monocacy Valley Montessori Public Charter School in the district.

“Had [my child] gone and seen it and come home, I would have been far more livid because the statistics on the trans people attempting suicide is staggeringly scary,” Lynn said. 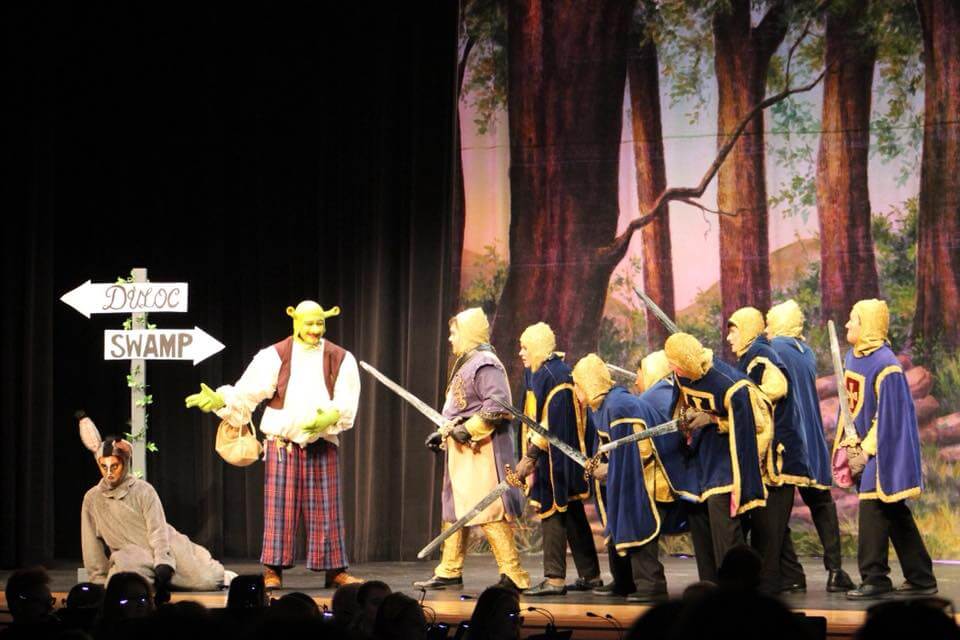 Lynn sprung into action when he heard about the slur, posting about the musical on his Facebook wall. He emailed the musical director Michael Copen and administrators.

Van Kuilenburg also emailed Copen. In the lengthy email, on which she CCed Principal Donna Clabaugh, Van Kuilenburg asks that transphobic language be removed from the script and that the school reconsider the character Lord Farquaad.

“My child’s identity is not something to be used as a comedic device,” she wrote. “Every year we see an increase in the number of murders of transgender people‐ and transgender women are in particular at risk from violence. Encouraging children and audience members to laugh at the idea of a transgender character in a musical is very dangerous.”

That same day, Copen wrote back stating that he could not alter the script due to copyright laws. Further, he said, the portrayal of the Big Bad Wolf was actually affirming.

He pointed out that the word is used when the Big Bad Wolf sings, “They ripped my cotton, granny dress, and they called me a hot and tranny mess.”

Copen wrote that the Big Bad Wolf is proud, tired of hiding their “cross-dressing” self.

“I wish you would have been here to see and hear the audience reaction to the Big Bad Wolf exclaiming their acceptance of being a ‘cross­dressing wolf,’” he said. “The reaction was an explosion of cheers for acceptance, not laughter and mockery.”

But for van Kuilenburg, this explanation fell flat. For one, she knew from news reports that productions of Shrek had ignited controversy for using anti-trans slurs in Halifax, Canada, and that scripts had been fixed. She contacted the publishing company, Music Theatre International (MTI).

The company told her that due to concerns about the offensive language, the script had recently been updated. The director at Oakdale may not have the new lyrics yet, the company said, but someone from the school had reached out to MTI, and the company sent the updated lyrics along.

Van Kuilenburg pressed Copen in a follow-up email, and he responded that he had indeed received the updated lyrics and that the slur would be removed for the evening performance.

But Van Kuilenburg and other parents were still unsettled. Parents like Wendy noted neither Copen nor any other school officials ever apologized for the slur or other offensive portrayals in the play. Nor did they express an understanding of why the play made trans students feel unsafe.

Lynn emailed the Board of Education and asked for an investigation into whether or not the district’s transgender policy had been violated.

Van Kuilenburg emailed Copen and other school officials and pressed them on the issue. In a lengthy email, she said she worried that they neglected to recognize the word “tranny” as problematic.

“It’s not too late to make this a learning experience and myself, along with some families of transgender students and local transgender adults, would be very happy to meet with you,” she offered.

Jabari Lyles, executive director at LGBTQ education organization GLSEN Maryland said his organization also reached out to Oakdale. First, they sent a letter. When they got no response, they sent an email.

A couple weeks later, Lyles learned that Van Kuilenburg had been fired.

Four days after the play and three days after Van Kuilenburg emailed Copen, the musical director wrote to Van Kuilenburg’s superiors and lobbied for her termination. He said her actions harmed him professionally, and she could be called to represent him as the UniServe Director of MSEA.

In her termination letter, MSEA appears to agree. The letter, signed by MSEA Executive Director David Helfman, tells Van Kuilenburg that her actions display a conflict of interest and create a liability for MSEA.

It accuses her of “subjecting Mr. Copen to significant public ridicule” by posting his email to her Facebook page.

“This all occurred during the course of your workday,” the letter notes.

But Copen is not a member of MSEA, and Oakdale is not a school that Van Kuilenburg serves. Van Kuilenburg used her personal email and social media accounts, not her work accounts.

Brad Darjean, President of the Professional Staff Association of Maryland, the union that represents her, further argues that the staff he represents are salaried employees. They’re not required to work certain hours, and they are free to use their personal emails and social accounts, he says.

“Many of my union members have children assigned to school districts that they are also assigned to,” said Darjean. “So there’s concerns relative to the point where they need to function as a parent and whether or not our employer, MSEA, feels that we need to acquire their permission act as a parent.”

Van Kuilenburg’s union has filed a grievance seeking her reinstatement. The chorus of those angered by her dismissal include GLSEN’s Lyles who speculates that Van Kuilenburg’s advocacy for the trans policy with her son James proved too great a test for the district.

“I think that they thought were going to make an example out of her I guess to stifle any more LGBT organizing,” Lyles said. “If their goal was to shut us up, that’s exactly the opposite of what we’re going to do.”

In a statement to INTO, MSEA Assistant Executive Director of Communications and Member Engagement Adam Mendelson, denied that characterization.

“We are not in a position to comment on personnel matters,” he wrote. “However, this insinuation is inconsistent with both our values and our pride in the work that our members in Frederick County and elsewhere have done to ensure a safe and welcoming learning environment for all students.”

“In reading that [transgender] policy from our Board of Education, it doesn’t address the issue of school plays in particular or the kind of language that is used in artistic productions, or literature, so, I’ll let people interpret the policy themselves,” Doerrer said. “In terms of what would a positive next step look like, I think we’ve made a number positive next steps”

In the meantime, Van Kuilenburg has not only lost her income, but her unemployment has been denied. MSEA reported that she had committed “gross misconduct.” She has also lost her health insurance.

Lynn claims Van Kuilenburg was used as a scapegoat for the bad feelings of one educator.

“To be terminated because you are essentially doing the right thing and letting people know that the use of transphobic slurs is not right,” he said. “And especially because the information would have been out there had Nicola not gotten involved in it.”

Copen did not respond to a request to comment.

Van Kuilenburg says at the end of the day, she acted because she didn’t want her son James to hear an anti-trans slur.

“There was no compassion,” she said. “There was no allowing me to be a parent. There was another solution to this. They could have come out in strong support of the policy.”

Wendy says Nicola and James represented hope. They weren’t just advocates in the district, they lifted the issue into the national spotlight.

“They were our people. They would speak for us,” she said. “[MSEA and the district] not only punished her for standing up for our kids, but they sent a message to all of us. They gave us a policy and said we’re not going to enforce it.”