Malcolm Kenyatta has won. As of 10:10 p.m., the Philadelphia Tribune reports that the Democrat led in Pennsylvania’s 181st House district with an astounding 95 percent of the vote.

Malcolm Kenyatta believes America is sick of the hate. In fact, he’s got the receipts to prove it.

Just as voters were headed out to the polls on the morning of the May primaries, Kenyatta discovered homophobic fliers targeting his candidacy for the Pennsylvania State House posted all over the neighborhood. The leaflets featured a Facebook photo of Kenyatta, who is openly gay, posing with his now ex-husband on their wedding day.

Kenyatta initially posted the picture—in which the two lock arms while beaming brightly—on social media to mark the couple’s one-year anniversary. “Thank you for saying ‘Yes,’” he wrote. “Thank you for this first year of marriage.”

That idyllic image was stamped over with an interdictory circle, urging North Philly to “SAY NO” to “MALCOM KENYATTA [sic].”

The fliers were intended to stir up anti-gay sentiment in Pennsylvania’s 181st House district, which is predominantly African-American and working class. Nearly 62 percent of the North Philadelphia district—which also encompasses parts of Francisville, Glenwood, Kensington. Poplar, and Yorktown—is black. Thirteen percent of residents are Latino.

But according to Kenyatta, whoever was responsible for the attack clearly underestimated Pennsylvanians. He won the Democratic primaries with a decisive 42 percent of the vote, besting his next closest challenger by 15 points.

In fact, the fliers appeared to only help his campaign: A neighbor told him she brought three friends to polls after she saw the handouts posted in their area.

“My opponents thought putting these hateful messages would be a boon to them,” Kenyatta told INTO, citing the false stereotype that communities of color are less than friendly to LGBTQ people. “People in my district said, ‘No, we’re going to go in a completely different direction because we know Malcolm. We know how hard he fights for the people, and we know that he’s going to fight for us.’”

Kenyatta believes the reaction to a culture of bigotry and division under the Trump administration is what has fueled the historic rise of LGBTQ candidates in this election. Across the state of Pennsylvania, nine gay, lesbian, and bisexual politicians are competing for office on Nov. 6.

The grandson of civil rights leader Muhammad Kenyatta, the 27-year-old will face off against Democrat-turned-Republican Milton Street on election day.

Kenyatta stands an extremely good chance of repeating victory in a deep blue district. The Democratic incumbent, W. Curtis Thomas, won by 24 points in 2016. His opponent was also a Democrat. That’s because Philadelphia’s 181st hasn’t had a conservative candidate at all in the past two decades.

If he wins, Kenyatta would not only be the first out LGBTQ person tapped to his seat. He would also be the first queer person of color elected to the state legislature in Pennsylvania, as well as the second openly gay man after Rep. Brian Sims.

While Kenyatta is proud to help shatter that glass ceiling, he admits he’s “frustrated” it took until 2018 to get there.

“It’s frustrating to me that this still is a milestone—that our government is not reflective of the variety of people’s experiences,” he said in a half-hour phone conversation. “I’m not just black and gay—I’m also from a poor community. I know what it’s like to get an eviction notice. I know what it’s like to have somebody call your phone and say to you, ‘Listen, if you don’t pay $150 on your bill right now, this is to be the last phone call.’” 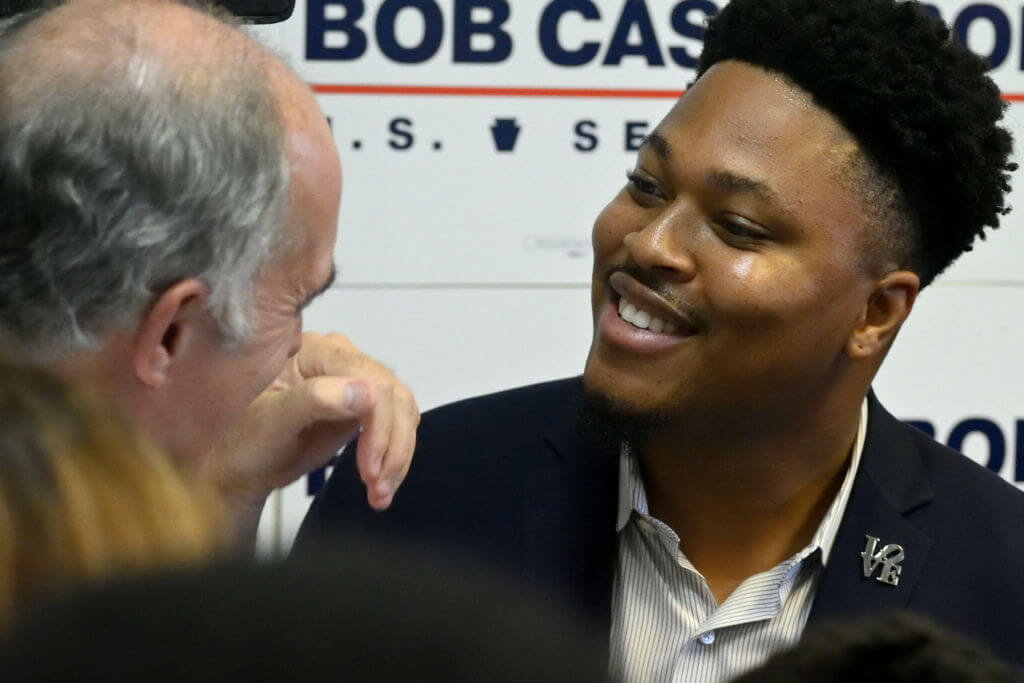 Kenyatta grew up in a middle- and working-class neighborhood adjacent what’s often referred to as the “Badlands,” a section of Lower North Philadelphia that’s a nexus for drug-related crime.

Although his grandfather ran for mayor in 1975 and his cousin is the incumbent he stands to replace, Kenyatta said he comes by his political activism not through legacy but love of community. When he was 11, he ran for junior block captain of Woodstock St. after complaining about the trash and lack of activities for kids his age.

Fed up with her son’s idle grousing, his mother told him to get out there and fix the problem himself. “Well boy, if you care so much about the block, go do something about the block,” Kenyatta remembers her saying.

His mother passed away last year, but that early life lesson stuck.

“I certainly come from a family of people who’ve been engaging in public service,” he said, “but I was really blessed to have a mom that said, ‘Listen, it’s not enough to sit on the outside yelling about how things could be different. You have to be a catalyst for that change, and that’s what I decided to do.’”

Sixteen years later, Kenyatta is still working to improve the neighborhood he grew up in. The median income of a North Philadelphia household is $16,500, more than $42,500 below the national average.

For the LGBTQ constitutents he plans to represent in Harrisburg, poverty is also an issue that deeply touches their lives—although it is often rarely discussed. According to the National LGBTQ Task Force, 34 percent of black trans people in the U.S.—or one in three—report household incomes under $10,000 per year.

Normally the platonic ideal of composure in a suit jacket and thick, tortoise shell glasses, a note of pathos trickles into Kenyatta’s voice as he discusses groups he feels state lawmakers have left behind.

“You can’t take care of yourself or your family on 10,000 bucks,” he said. “It gets me frustrated when I talk about these things because there’s so many good people who are doing everything they can to get by, and we have a government that’s completely ignored them.”

The Pennsylvania General Assembly certainly has done little to address the crises affecting the state’s most marginalized. Conservatives in the Republican-controlled legislature have stymied efforts to raise the minimum wage every year since 2009. At just $7.25, Pennsylvania has the lowest minimum wage of any state in the Northeast Corridor.

In fact, only two U.S. states have a lower minimum wage: Georgia and Wyoming.

Although Pennsylvania is a purple state, you wouldn’t know it from the makeup of the legislature. Republicans hold a supermajority in the State Senate and a commanding plurality in the House—120 to 83.

Those margins haven’t been kind to pro-LGBTQ legislation. Unlike neighboring Delaware, Maryland, and New Jersey, the Keystone State has yet to pass a fully inclusive nondiscrimination ordinance at the state level. The only other state in the northeast without one is New York.

Kenyatta claimed the state legislature’s failure to address the needs of low-income and LGBTQ people shows it “does not reflect the people it purports to represent.”

“If you are frustrated by what you’re seeing in Washington, D.C., Harrisburg is worse,” he said, stopping just shy of calling out the president by name. “They’re just as conservative. They’re just as outrageous. They want to go backward just as much as he does—and in some cases more.”

The candidate cited a recent controversy surrounding State Rep. Daryl Metcalfe to illustrate the convergence between the Pennsylvania GOP and the White House.

The famously homophobic lawmaker made national headlines after targeting opponent Daniel Smith, Jr., an openly gay man, in a heated race for Pennsylvania’s 12th House district. A series of mailers sent out by Metcalfe’s campaign called Smith as a “lawless liberal” and referred to his husband in quotation marks.

Last year, Metcalfe accused Democratic Rep. Matt Bradford of being gay when his colleague briefly touched him during a legislative hearing.

“Look, I’m a heterosexual,” Metcalfe responded. “I have a wife, I love my wife, I don’t like men, as you might. … Keep your hands to yourself. If you want to touch somebody, you have people on your side of the aisle who might like it. I don’t.”

Bradford is married to a woman, with whom he shares four children.

Kenyatta believes the people of Pennsylvania don’t want their politics to be defined by “the nastiest, most hateful things we can say about one another.”

“We see that in the White House every single day,” he claimed. “I think that people want a hopeful, forward-looking message. When folks want to go down the rabbit hole of bigotry and hatred, it’s because they are out of good ideas.”

While Kenyatta called on Metcalfe to resign, he knows that won’t happen. Thus, the candidate claimed it’s on LGBTQ people to step up until he’s voted out.

Kenyatta said this year’s crop of LGBTQ candidates could signal that sea change.

“These are really strong candidates who know their communities and neighborhoods and share a progressive vision of how to deal with the multiplicity of issues that face our community—from funding our schools and making sure families have more money in their pocket to make sure people can stay in their home,” he claimed.

“These are people that not only shared that perspective of being from a marginalized group, but they have real plans on how to address the broader systemic issues,” Kenyatta added.

These hopefuls include a number of others who hope to make history on Tuesday. If elected, Kristin Seale of the 168th House District in Southeastern Pennsylvania would be the first LGBTQ woman to sit in the state legislature. Meanwhile, James McDevitt, a self-described “Berniecrat Socialist” and political independent, plans to take on Sims in District 182.

The McDevitt-Sims race marks something of an auspicious landmark: Its actually the second time this year that two LGBTQ candidates have faced off against each other. One of Kenyatta’s primary opponents, Alex Deering, was also black and gay.

Kenyatta said the astonishing number of LGBTQ candidates in this year’s midterms is a reminder they have something unique to offer—if Harrisburg is willing to listen.

“I don’t think anybody should vote for me simply because I am LGBTQ, but I do think my sexual orientation matters in one way,” he said. “You gain a different level of empathy when you know what it’s like to always be picked last, to always be at the back of the line, and to always be told that you don’t deserve to exist as you are.”