Prince Harry and bride-to-be Meghan Markle took a stand for LGBTQ rights on Wednesday in a meeting with the Commonwealth Youth Forum.

The royal couple spoke with 500 young leaders just days after U.K. Prime Minister Theresa May called on Commonwealth nations to decriminalize homosexuality. Harry, who has previously been outspoken in his support of queer and trans equality, claimed May’s speech was a “mandate.”

“This is a basic human rights issue, not one about sexuality,” added fiancée Markle, as Australian youth delegate Jacob Thomas told reporters.

On Monday, May claimed she “deeply regrets” the historical role Britain played in pushing anti-gay sodomy laws in cultures it colonized. English settlers often forced conquered peoples to adopt criminal codes targeting homosexuality, many of which have yet to be repealed.

Of the 53 Commonwealth nations, the global advocacy group All Out claims 37 still have laws on the books criminalizing same-sex activity.

May pledged her government’s support in overturning those laws.

“Nobody should face discrimination or persecution because of who they are or who they love, and the U.K. stands ready to help any Commonwealth member wanting to reform outdated legislation that makes such discrimination possible,” the U.K. leader told the Commonwealth Heads of Government Meeting (CHOGM).

May’s remarks followed a petition signed by 15 international organizations urging the PM to take a stand on the outdated laws, as well as a planned action from All Out calling attention to the maltreatment of LGBTQ populations.

“In 37 Commonwealth countries, love is illegal,” read a message projected onto the Palace of Westminster. 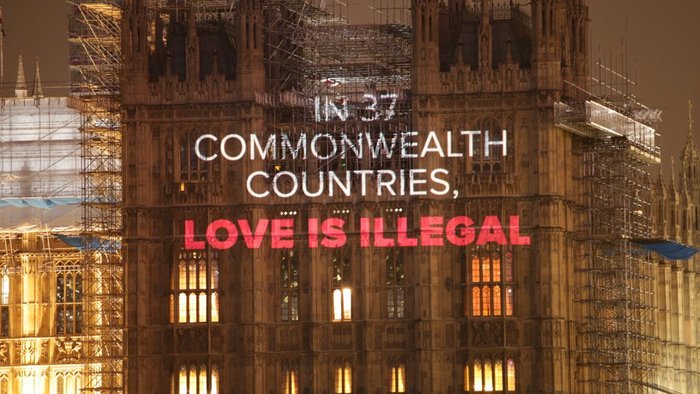 Thomas, who has been honored for his work on LGBTQ youth suicide in Australia, said that Prince Harry heralded the Prime Minister’s speech as overdue process.

“Prince Harry said that what was so amazing was that 10 or so years ago, we wouldn’t have been having this conversation,” he claimed, adding that the royal said it was “incredible” that the federal government was now tackling this discussion.

Other delegates confirmed the couple’s stance.

“Both Prince Harry and Miss Markle said they would put LGBTQ issues at the front of their work,” Kenyan activist Jonah Chinga told the press.

The younger prince has previously stood in support of queer and trans rights in the U.K., urging Britons to know their status. In accepting an award from Attitude magazine on behalf of his late mother, Diana Princess of Wales, for her work in fighting HIV/AIDS, Prince Harry said he was proud to carry on her legacy.

“[Diana] knew that the misunderstanding of this relatively new disease was creating a dangerous situation when mixed with homophobia,” he said in a November speech.

Prince Harry said he was glad to have Markle at his side to continue that work.

“I am incredibly grateful that the woman I am about to marry, Meghan, will be joining me in this work, of which she too is hugely excited to take part in,” he is reported to have said on Monday.