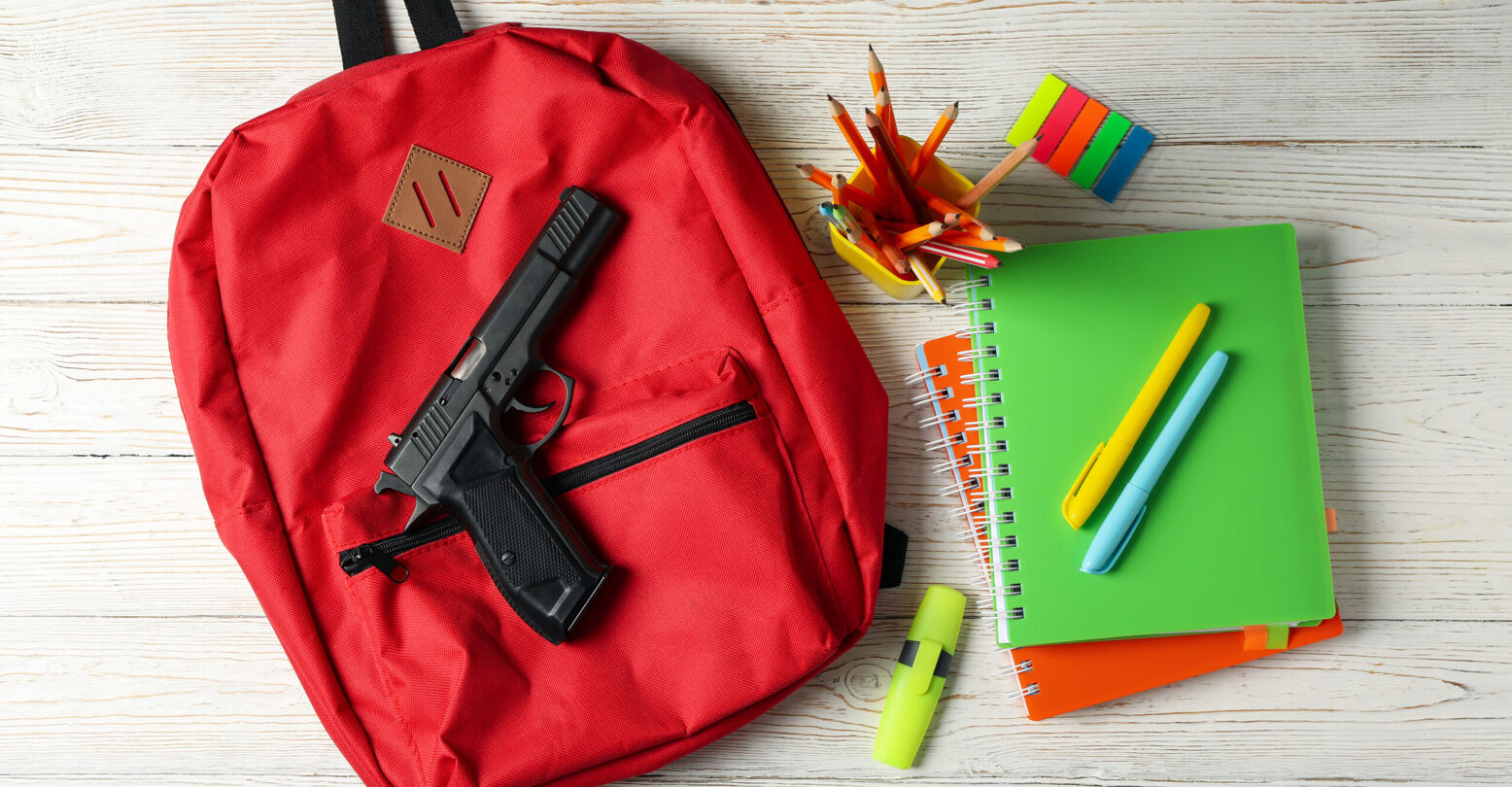 There are between ten and fourteen blunt objects in my classroom I would be comfortable using with deadly force, my first choice being the fire extinguisher sitting behind my front door.

On that same door is a bolted-on device that keeps it propped open during the school day, but has a quick-release latch that allows me to pull and lock it in less than a second.

For the narrow window that looks out into the hallway, I bought peel-and-stick black paper accordion curtains. I found them at the hardware store for $7, and four of my colleagues went out and bought them when they saw mine.

I have run students through at least two active shooter drills a year, every year, since I started teaching ten years ago. This year, because one of my students is a survivor of a mass shooting, I had to remember to warn her the day before so she could prepare herself.

I have run students through at least two active shooter drills a year, every year, since I started teaching ten years ago.

“If there was a shooter here, I would just tackle him before the first round,” I hear someone shout with typical high school bravado, as we walk en masse in the September heat down to the football field, a casual facsimile of a campus evacuation. “Nah he’d probably be on one of the roofs. Look, there’d be like no place to go.” dozens of pairs of eyes take in the buildings that surround us. “I don’t get why we go down to the field anyway. It’s not like there’s anywhere to hide down there.” These are casual conversations that I tune in and out of, teenagers who laugh now but will lay awake with their eyes wide open in the middle of the night.

Once, a vice principal who had been a former county sheriff invited some of his police friends to our campus for a staff meeting and had them fire blanks in the hallway so we could hear what it might sound like. We also listened to a recording of the Columbine 911 call and were asked to close our eyes and visualize what we would do through a series of increasingly unthinkable scenarios.

Sometimes, life as a queer teacher feels like double-dipping into humanity’s capacity for cruelty.

Asking how American gun brutality influences my life in the classroom is almost a non-question, as I can’t remember a time in which I was not constantly made aware of what this job asks of us, of what we have to be prepared to do. The looming threat of inevitable violence is woven into my skin, has me scanning for exits and searching for shelter at every back-to-school night, every theater performance, every football game and graduation. It’s a prickle at the base of my neck when I see an adult walking to the front office with a forgotten lunch, a drop in my stomach when the fire alarm malfunctions in the middle of an exam.

“Why aren’t we going outside?” My students ask, when I pull the door locked instead of forming us in a line to leave, the alarm blaring and flashing above us. Because the shooter at Parkland pulled the alarm to flush students into the hallway, I think. But I say “let’s just wait for an announcement before we do anything. It’s hot out there.”

Sometimes, life as a queer teacher feels like double-dipping into humanity’s capacity for cruelty. School had only been out a week in the summer of 2016 when a gunman opened fire at the Pulse nightclub in Orlando, slaughtering almost fifty people. I had attended my very first pride event the night before. A candlelight vigil the next night was my second.

The grief felt unfathomable then. I couldn’t imagine our country stomaching another tragedy like it.

Then, the next year, a gunman opened fire on a music festival in Las Vegas. One of our teachers was there. The next year was Parkland. I flew to Washington DC on a whim, fueled by anger and desperation. I stood with a million people on Pennsylvania Avenue as I watched children affected by gun violence beg for change, for the bare minimum, for anything.

I had attended my very first pride event the night before 2016’s Pulse massacre. A candlelight vigil the next night was my second.

“Is anyone going to do anything about it this time?” one of my students asked me.

What was left to say then?

Being a teacher in America watching the routine of horror and inaction has left us feeling trapped on a shitty carnival ferris wheel. We can keep doing the same thing over and over again, but for now long? When does it fall apart? When do we hit our personal limits and walk away?

There will be no tragedy so terrible, no outcome so unthinkable, that our country will simply snap out of it.

One way off the wheel—offers the dumbest of us—is to saddle our country’s 3 million school teachers with firearms and push them back into the classroom. When I first heard this argument after Sandy Hook in 2012, I was a fresh-faced 22-year-old teacher who was willing to patiently sit down and explain why increasing the number of deadly weapons in one of the most emotionally volatile environments in any given community was a tragedy waiting to happen, but now, hearing it just makes me want to throw bricks.

As a queer teacher, I can spend a year being called a pedophilic groomer, but can still be trusted to stride through my crowded hallway with a 44 magnum strapped to my chest?

It’s obtuse, it’s short-sighted, and it’s a dead giveaway that the person offering it hasn’t thought about it for more than four seconds. It’s a comfy diversion from the reality that is much harder to stomach: America has a gun culture problem that will continue to spiral ad nauseam, with no end in sight, for as long as we collectively refuse to acknowledge it. There will be no tragedy so terrible, no outcome so unthinkable, that our country will simply snap out of it.

So why is this the only place where this keeps happening?

Until we’re ready to confront that, I’ll spend an extra few moments kissing my wife before I head to school, lingering a little longer than I did before, just in case.♦