After months and months of hearing about all the Facebook ads that the Russian government created in order to sway the 2016 election in Trump’s favor, we finally get to see what some of these ads looked like.

Congressional lawmakers revealed a number of them during a three-day hearing with lawyers from Google, Facebook, and Twitter over the role that these social media platforms played in Russia’s interference efforts, The New York Times reports.

The ads, published by pages with single issue-oriented names like Blacktivists and Back the Badge, are pretty varied, appearing to promote everything from Black Panther-inspired messages of black liberation to anti-immigrant border-patrol fearmongering. Some appear to be more straightforward attack ads, like one that shows Satan and Jesus arm-wrestling with the former threatening that “If I win, Clinton wins!” Others are more layered, using positive liberal messaging to stoke anxiety and fear among conservatives.

One that caught our eye is this ad published by a page called LGBT United featuring a pin-up style illustration of Vermont Senator and 2016 Democratic hopeful Bernie Sanders. It’s bright with many different colors. There’s an almost Tom of Finland for kids thing going on with it. The Times likens it to “a Bernie Sanders superhero promoting gay rights.” 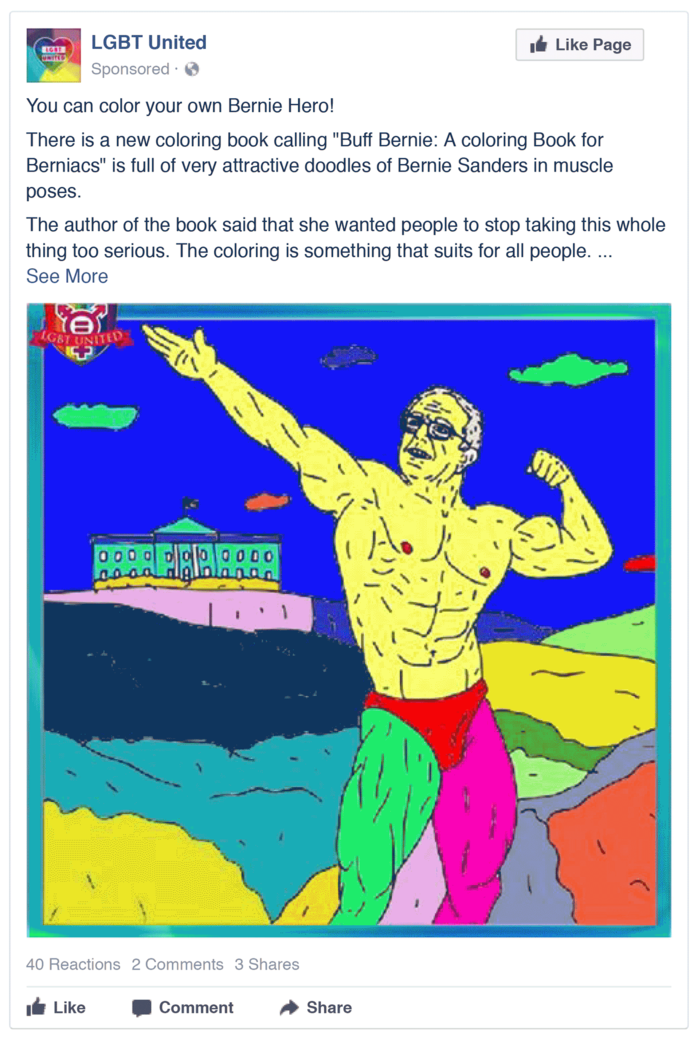 While the ad appears to be for a coloring book for gay adults, called Buff Bernie: A Coloring Book for Berniacs, the Times says that its true intention was to “exploit divisions in American society” like anti-LGBTQ sentiment. Homophobic and transphobic fearmongering has pushed through so much legislation throughout American historywhy wouldn’t it have worked in the 2016 election?

To check out more of the ads, head on over to The New York Times and Axios.