On a Sunday afternoon in the heart of New York’s conservative Russian enclave, a gay man is repeatedly shouting the word “Pride” into a megaphone.

Standing on a park bench that’s acting as a makeshift stage for the occasion, he repeats the word three times before the crowd gathered on the Brighton Beach boardwalk. The audience is a mix of immigrants, activists, and a marching band that follows the group as they march down the walkway. A row ahead stands a tall woman with cotton-candy pigtails, while others clutch signs reading “Homophobia Kills” written in Cyrillic.

The speaker is Lyosha Gorshkov, Co-President of RUSA LGBT and a co-organizer of today’s event. Gorshkov asks the crowd what Pride means to them; to him, it means the courage to be himself in a new home. 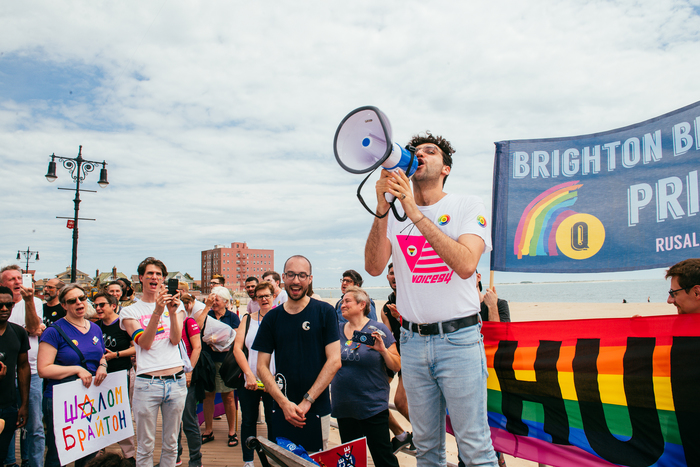 “Every time I hear from people, you shouldn’t, you couldn’t, and you wouldn’t because you are making things worse,” he says in a reference to the march, “I have a question back: If we don’t do so who is going to do your work for you? Who is going to come out and educate people, if we are hiding in the back of our closets?”

The gathering is the second Brighton Beach Pride, an annual celebration for LGBTQ members of the post-Soviet diaspora who have resettled in New York City. Speakers included a representative of the New York City Mayor’s Office, a pair of New York civil court judges, and a cast member of Broadway’s Book of Mormon, who sang to the crowd in place of a speech.

The first Pride was organized last year in response to the purge of gay and bisexual men in the semi-independent province of Chechnya, a majority Muslim territory located in southwestern Russia.

More than 100 men have reportedly been rounded up, beaten, and tortured, and at least four killed, including a popular Russian singer who is presumed dead. But organizers say the event is about more than raising awareness of strongman Ramzan Kadyrov’s terror campaign.

“Unfortunately, since last year, nothing has changed in regards to people in Chechnya,” Gorshkov claims. “The United States still hasn’t taken any of them. It’s part of our agenda, but we have many more troubles.”

Many of the LGBTQ people who have come out to Brighton Beach Pride are queer and transgender people escaping persecution from the homophobic regimes of Eastern Europe and Central Asia. Speaker Anvar Latipov, a fellow speaker during Sunday’s event, says he gave up a passion for music in his home country of Uzbekistan in fear of attracting too much attention.

“I never met anyone in Uzbekistan who is an LGBTQ person,” Latipov, also an activist with RUSA LGBT, tells INTO over the phone. “I was scared to speak about who I was to anyone. People like me might be hurt, might be banished, or in some cases killed.”

“LGBTQ rights are nonexistent in Uzbekistan,” he adds. “LGBTQ people are very undercover. They don’t lead an open life. They live in secret.” 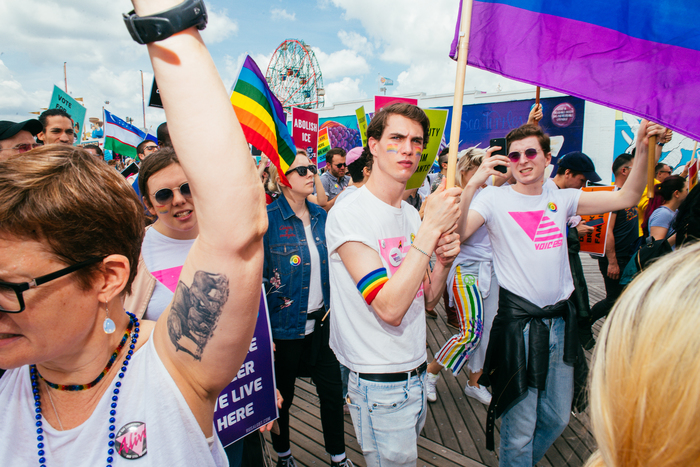 But Anastasia Orlova, who relocated to the United States from Russia in 2016, says queer and transgender people don’t always have the luxury of masking their identities. Orlova, a former schoolteacher, would only disclose her sexual orientation to friends and family, telling coworkers and neighbors that she and her wife were “sisters.”

“It was a secret life, and not a life I wanted,” she tells INTO. “In Russia, you never know whether someone is tolerant or acceptable.”

“I was depressed and I was scared to meet new people,” Orlova continues in a phone conversation. “When you meet a new person, he or she will ask you about your relationshipyour wife or husband. It’s a horrible thing to think about whether you should lie, tell the truth, or give some other answer.”

Others in her neighborhood increasingly began to suspect something. Orlova says the couple was harassed, and rocks were thrown through their windows. When they went to the police about the vandalism, authorities told them not to worry.

The women didn’t have relatives they could lean on in times of trouble, Orlova claims. She alleges that her mother was vehemently against their relationship, often sending the couple “hate mail.” When Orlova and her partner, Elvira Brodskaya, moved from Moscow to St. Petersburg, her mother tried to track down their address.

“We wanted a normal life we couldn’t have in Russia,” Brodskaya tells INTO. 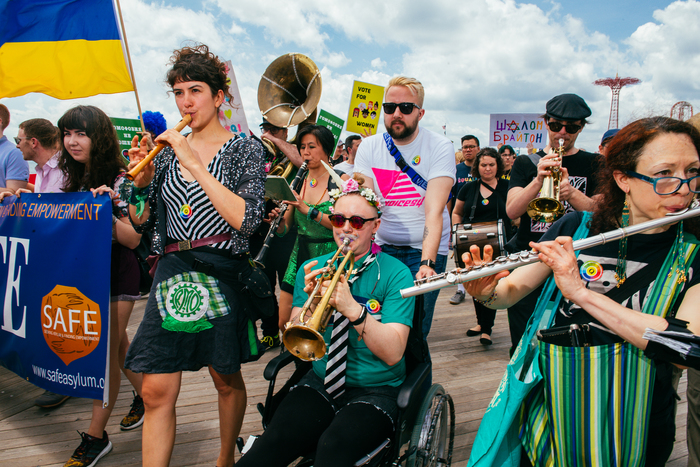 In many ways, Brighton Beach Pride represents the fulfillment of that promisethe hope for a fresh start in a new country. The neighborhood, best known for the iconic Coney Island amusement park along the Brooklyn shores, has long symbolized the heart of Russian-speaking America.

The enclave also represents, however, many of the challenges that LGBTQ people emigrated to the United States to escape. An estimated 60 percent of Brighton Beach residents, many of whom came to the country more than 50 years ago, who voted in the 2016 election supported President Donald Trumpwho has yet to speak out against the continuing violence in post-Soviet Chechnya and Uzbekistan.

Gorshkov says the day of Brighton Beach Pride, many of the journalists who came to cover the event were jeered by locals. Residents told reporters that Trump is the “best president” because “he’s going to get rid of all Mexicans.”

“We’re all immigrants,” Gorshkov claims. “They don’t see the essence of the issue.”

The LGBTQ advocate, who also organizes with the activist group Voices 4 to raise awareness about global crackdowns against queer people, experienced this jarring culture clash firsthand. When Gorshkov, a former university professor, relocated from Russia four years ago, he experienced much of the same harassment and homophobia in his new country.

Although Brighton Beach Pride wouldn’t come about until 2017, Gorshkov says the idea for the event was borne out of those altercations. After everything he went through to get to the United States, he felt he shouldn’t have to hide anymore.

“What’s the point of coming here and going back into the closet?” he says, echoing the his own words to Pride marchers. 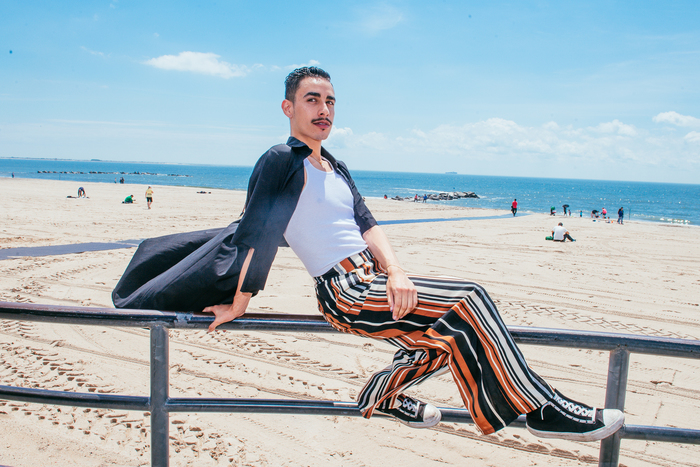 After a small reception in 2017, there are signs queer and trans immigrants are hearing the call. This year’s crowd swelled to more than 100 people, many of whom went to local cafes after the march to share beer and stroganoff. Whereas the inaugural Pride was predominantly U.S. allies to post-Soviet refugees, organizers estimate that 60 percent of 2018 attendees were Russian speakers.

Even the local community in Brighton Beach is slowly coming around. Although organizers had difficulty finding venues that would host an informal Pride after party last year, supporters left behind Pride banners in restaurants willing to support the community.

This year Gorshkov says that interactions with the babushkas and elderly Russian men in velour jogging pants on the boardwalk were largely positive. Everyone who came up to him expressed congratulations and, well, pride.

Calling the reception “amazing,” the activist believes the warmer welcome shows that Brighton Beach’s LGBTQ community is on the right track.