That’s the question on the minds of millions after Taiwan voted down marriage equality on Saturday in a national referendum — a shocking, decisive result which seemingly threw the future of LGBTQ rights into chaos. Seventy percent of Taiwanese voters cast a ballot against same-sex unions in a first-of-its-kind plebiscite.

Because the vote is so novel, there are many questions left to be answered about the referendum and how it will be applied.

But as of today, here’s what you can expect.

Here’s What We Know Now

Three days before the referendum vote, lawmaker Jason Hsu explained that the vote is strictly nonbinding. In a Nov. 21 interview, he told INTO the referendum has a “symbolic meaning but … doesn’t really have actual binding effect.”

What separates Taiwan from the case of Proposition 8 is that the infamous 2008 vote immediately reversed the California Supreme Court’s historic ruling on marriage equality. Same-sex couples in the Golden State would have to wait another five years to marry, after the vote was overturned following a series of court decisions.

But in Taiwan, issues like same-sex marriage cannot be decided by public referendum.

Earlier this year, a spokesperson from the Justice Ministry referred to the plebiscite as offering “direction” for lawmakers when deciding what route to take on relationship recognition for same-sex couples. Rather than having the power to create legislation, the referendum is an informal poll that surveys the public mood.

On that front, the results don’t appear all that encouraging.

On Saturday, voters actually sounded off on five referenda in total: three against LGBTQ rights and two in favor of equality. One question concerned the creation of a separate law in the Civil Code that would “protect” the rights of same-sex couples, similar to domestic partnerships or civil unions.

Even while overwhelmingly rejecting full marriage equality, a significant majority of Taiwanese favored this proposal. More than 58 percent of voters were OK with a second category for LGBTQ partners.

If Hsu claimed the referendum requires lawmakers to respond within three months, the Legislative Yuan could elect to put forward a civil unions bill. But while such legislation could be headed down the pipeline before the 93-day deadline, it’s not likely to become law.

As one of the leading supporters of LGBTQ rights in the Legislative Yuan, Hsu said he would not support legislation he believes is tantamount to discrimination. In fact, should the lawmaking body introduce a bill that relegates same-sex couples to a lower form of relationship recognition, he claimed he would personally ensure the legislation does not move forward.

“We should not allow a special law to be sent to our committee for review,” he said. “I will do everything I can to tear down that committee. I will fucking block it because it’s not right.” 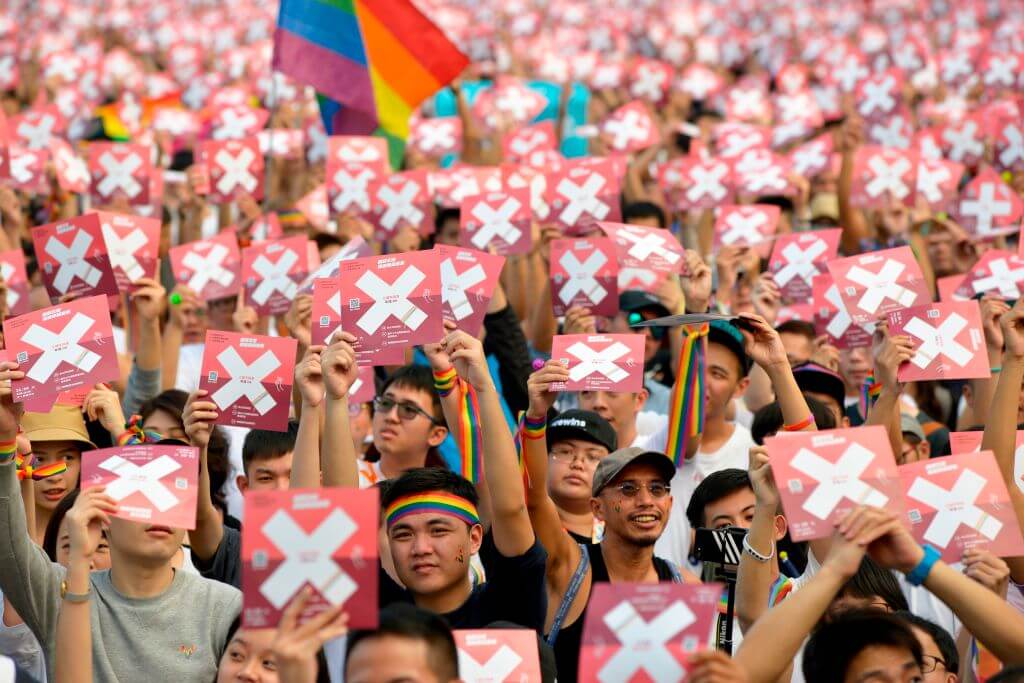 Here’s What We Don’t Know Yet

What’s an open question is whether Taiwan is required to put forward a bill by February or if they have the ability to ignore the referendum.

When INTO spoke to lawmaker Mei-Nu Yu last week, she suggested that the government is obligated to respond with legislation. Through the use of a translator, she claimed the “Executive Yuan is legally bound to propose a bill within three months and the Legislative Yuan has to draw up an amendment by the next session.”

Her response would suggest that lawmakers are obligated to put forward something in response to the vote — whether it’s a civil unions bill or a neutered version of marriage equality with an asterisk next to it.

But Hsu claimed legislators have the power to disregard the results by refusing to take action. He predicts that will be the case.

“My guess is the government might just simply not do anything,” he said. “To vote to create a separate law would trigger the anger in the LGBTQ community. For me, it’s discrimination.”

If the legislature punts on the issue, marriage equality will be the law of the land in six months’ time. May 29, 2019 marks two years since the Taiwan Constitutional Court ruled that laws preventing LGBTQ couples from marrying are unconstitutional. The verdict required lawmakers to draft a marriage bill before that date — or the ruling would automatically go into effect.

Evan Wolfson, founder and president of Freedom to Marry Global, claimed the passage of a civil unions bill would likely conflict with that very decision.

Should lawmakers manage to force through civil unions legislation, Taiwan could be headed for a situation similar to Bermuda. Its courts and federal government have spent the past year quarreling over LGBTQ rights.

After the Caribbean island first granted same-sex couples the right to marry in a 2017 ruling from the Bermuda Supreme Court, lawmakers overturned that decision just over six months later. In December, the country’s parliament passed the Domestic Partnerships Act, which appeared to relegate same-sex couples to a second-class status.

Although lawmakers claimed domestic partners would be granted the same rights as those afforded married couples, LGBTQ advocates viewed the legislation as a case of “separate but equal.”

They appealed the ruling and — to date — they have won twice.

After the Bermuda Supreme Court struck down the domestic partnerships bill in June, an appeals court upheld that decision last week. If the government doesn’t file a challenge with the Privy Council of the United Kingdom within 21 days, marriage equality will again become legal in Bermuda. That would make it the first territory to reverse its reversal of marriage equality.

Should the issue wind up back at Taiwan’s constitutional court, Wolfson claimed the bench must act as a check against the “temporary passions and prejudices” of voters.

“Sometimes politicians get it wrong, sometimes even majorities get it wrong,” Wolfson continued. “A true constitutional democracy believes in general that voting is important, but also understands that not everything should get put up to a vote. In particular, the majority should not be able to strip away basic rights from a minority.”

As the February deadline approaches, Taiwan’s government must clarify lingering questions about the scope of the referendum and what’s required of the legislature in responding to it.

Because the fact is, many people still have no idea what’s going on.

The referendum has caused mass confusion among Taiwan’s population of 23 million. Because nothing like this has ever happened before, even representatives with the Marriage Equality Coalition — which fought for legalization of same-sex unions—were unaware the referendum vote was merely advisory. They believed the plebiscite was the final word on the issue.

LGBTQ groups will now spend the next several months educating the public about what’s next for Taiwan and dispelling myths about the vote. But perhaps the most important work will be undoing the damage done by equality opponents.

To stir up opposition among a citizenry widely favorable to LGBTQ rights, the Happiness for the Next Generation Alliance relied on a campaign of misinformation to spread fear about what the freedom to marry would mean for Taiwan. They warned, for instance, that legalizing marriage equality would lead to an AIDS outbreak.

LGBTQ advocates say have seen these tactics before.

When Maine voted on same-sex marriage in 2009, the National Organization for Marriage (NOM) fought equality through a strategy of divide and conquer — pitting African-Americans and the LGBTQ community against each other. According to a New York Times report, anti-LGBTQ groups recruited black people who opposed same-sex marriage to run their campaign.

The goal was to “provoke the gay marriage base into responding by denouncing these spokesmen and women as bigots,” thus driving a wedge between these two important voting blocs.

Initially, it worked. Mainers rejected same-sex marriage 53 percent to 47 percent, then viewed as a major setback for LGBTQ rights.

But in 2012, voters in the Pine Tree State reversed their own decision by the exact same margin that they’d rejected equality just three years earlier. This time around, Maine approved same-sex unions by a six-point margin — making one of the first times a U.S. state voted in favor of the freedom to marry at the ballot box.

“We spent three years knocking on doors talking to our neighbors, telling the stories of real gay people and our families — and how marriage and the exclusion for marriage harms our children,” he claimed.

Now that the referendum is over, Wolfson predicted Taiwan would head down a similar path as Maine and California — both of which legalized equality after banning it. By the time Prop. 8 was eventually overturned by the U.S. Supreme Court in 2013, a substantial majority of Californians already supported the freedom to marry.

As before, the journey forward will begin with dialogue.

“If we remind people that Taiwan has values of respecting all people and promoting social harmony, people will move,” he said. “Once people are getting married in Taiwan and people see that nothing bad happens — that in fact families are strengthened, that it’s good for society, good for children, and good for the economy — support will grow.”