Jameka Evans would spend breaks on her job as a security guard crying in the closet.

After coming out at the age of 13, Evans tells INTO that she had to develop a thicker skin. She preferred wearing boys’ clothingsneakers and oversized shirtsbecause that’s what made her most comfortable. When she wasn’t in foster care, Evans was raised by her grandmother, who she claims was from an older generation stricter about how a young girl should behave. Adults would tell her that her sexuality, as well as the way she dressed, was a “phase.”

“When I was growing up, it wasn’t really accepted,” she says in a phone interview. “But I lived through it and never let it hold me back.”

Nothing, though, could prepare Evans for her experiences at the Georgia Regional Hospital. After getting a job at the psychiatric care facility in 2012, she claims that she faced constant harassment by her supervisor. Evans says her boss, Charles Moss, resented the fact that she didn’t conform to standard notions of femininity. She dressed in a men’s uniform at work and preferred to wear her hair in either short, tight locs or closely shaved down to her head.

Moss denied her career advancement instead selecting a less-qualified colleague for a promotion, as Evans claimed in court filings. He also allegedly slammed a door into her.

During this time, Evans says she stopped sleeping. And she dreaded coming to work every day. She was all but forced to leave, telling INTO that the treatment from superiors “made my work environment so hostile and dangerous that I couldn’t work at that job anymore.” 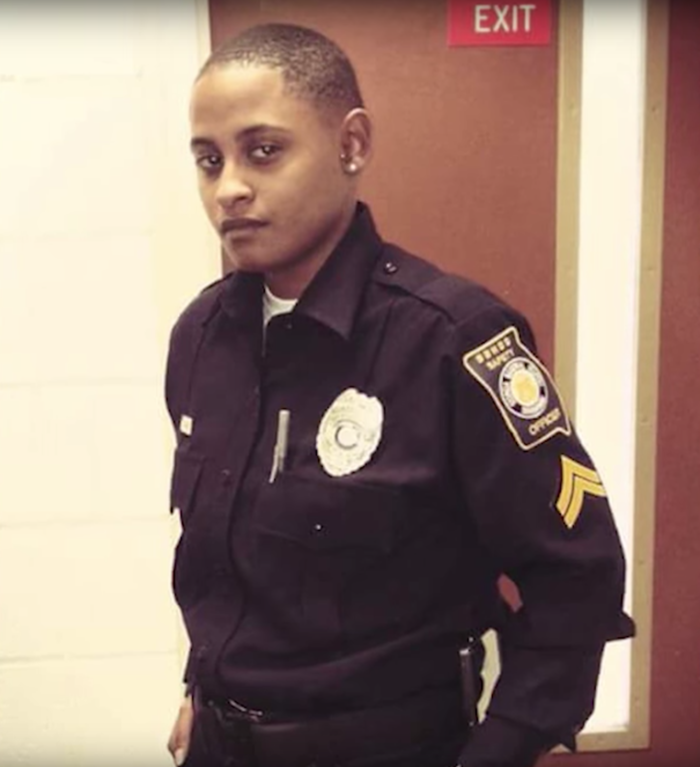 “It happens more often than others are willing to admit,” she says. “I know I’m not fighting this fight for just me.”

That fight suffered a severe setback on Monday when the Supreme Court denied to hear a lawsuit Evans filed against her former employer in April 2015, claiming that she was a victim of discrimination. Courts have, thus far, been split on whether the former security guard has the right to sue under Title VII of the Civil Rights Act of 1964, which offers protections in employment on the characteristics like race, gender, religion, and national origin.

After turning down a Texas case on partner benefits for same-sex couples last week, SCOTUS has again declined to get involved. The nation’s highest bench did not state the reasons it would not be hearing Evans’ case, as is customary.

For now, that means a lower court ruling denying the plaintiff’s right to sue under Title VII will stand. Judge William Pryor of the Eleventh U.S. Circuit Court of Appeals claimed in a July opinion that the courts are not “the appropriate venue” to debate Evans’ civil rights. The conservative justice, who was on Donald Trump’s shortlist to replace the late Antonin Scalia, wrote that the matter was up to Congress, which “has not made sexual orientation a protected class.”

But a contrary opinion from the Seventh Circuit Court all but ensures that the Supreme Court will be called upon to decide the issue eventually.

Reversing its own ruling from just a month prior, the Illinois federal court ruled in April that a lesbian college professor, Kim Hively, had the ability to sue for discrimination on the basis of her sexual orientation under Title VII, as prejudice on the basis of gay or lesbian identity is rooted in gender. Judge Diane Wood claimed that sexual orientation claims are the “ultimate case” of gender-based discrimination.

Lambda Legal Attorney Greg Nevins, who represented both Hively and Evans in their respective suits, claimed that the battle for LGBTQ employment rights would go on. He said in a statement that the Supreme Court is merely “delaying the inevitable,” even though that delay would continue to “cause confusion across the country.”

“[T]his was not a ‘no’ but a ‘not yet,’” said Nevins, who serves as director of the legal advocacy group’s employment fairness project.

Evans, who claimed she would be meeting with her attorneys to determine next steps, was unable to confirm whether she would continue to pursue legal action against her former employers.

Evans nonetheless says that Monday’s ruling was a “loss” for LGBTQ rights.

“Not only was I looking forward to it, a lot of strangers have reached out to me via social media and Facebook telling me, ‘Thank you for what you’re doing,’” Evans says. “For me to have gotten that kind of support from people I don’t know these past few years while Lambda Legal has been fighting my case meant a lot, and [this decision] hurts because I was thinking about them.”

But the LGBTQ may get another chance to get its day in court. The Second Circuit Court of Appeals is poised to rule on Zarda v. Altitude Express, in which a Long Island skydiving instructor claims that he was fired from his job because of his sexuality. Donald Zarda was let go from his job in 2010 after telling a female client that he was “100 percent gay” before a jump, sensing the woman felt discomfort being strapped to a man.

Zarda would be killed in a skydiving accident in Switzerland four years later, and the case is being pursued by his sister and longtime partner, Bill Moore.

No matter how the panel of 13 appellate judges rules, the New York-based court’s decision is likely to face an appeal. LGBTQ advocates are hoping that SCOTUS debates the Title VII issue before 81-year-old Justice Anthony Kennedy abdicates the bench. The moderate conservative, who has been a deciding vote in favor of many of the bench’s most progressive gay rights rulings, is widely expected to retire.

Should Zarda’s case (or another like it) reach the Supreme Court, Evans will be satisfied knowing she contributed to the greater good.

“I see my case being part of the bigger fight for LGBTQ rights,” she says. “Even if my case doesn’t continue to move forward, there will be more individuals who have the courage to step forward and to fight.”