In a move that is expected to send shockwaves through the transgender community, the Trump Administration has substantially altered the language for changing passport gender markers on the State Department website.

The web page on “Gender Designation” has been removed entirely and replaced with one “Sex Designation.” The page has been in place since 2010.

On Thursday, the State Department walked back the changes in a statement to INTO, stating there had unequivocally been no policy change and the website was not meant to offend.

Virgil Carstens, press officer at the Bureau of Consular Affairs, stressed that the department is committed to treating all passport applicants with dignity and respect.

“With regard to the web update, we added language to make our use of terms consistent and accurate and to eliminate any confusion customers may have related to the passport application process,” Carstens said. “We apologize for inadvertently including some language which may be considered offensive and are updating the website to remove it.”

The move was announced in a late-night press release Wednesday by the National Center for Transgender Equality, which stressed that the 2010 policy allowing transgender people to update their passports remains intact.

NCTE noted that most mentions of the word “gender” have been replaced with “sex.” The language on the new page notes that passports are valid for different lengths of time depending on whether or not you have completed your “sex change,” a largely outdated and offensive reference to gender transition. 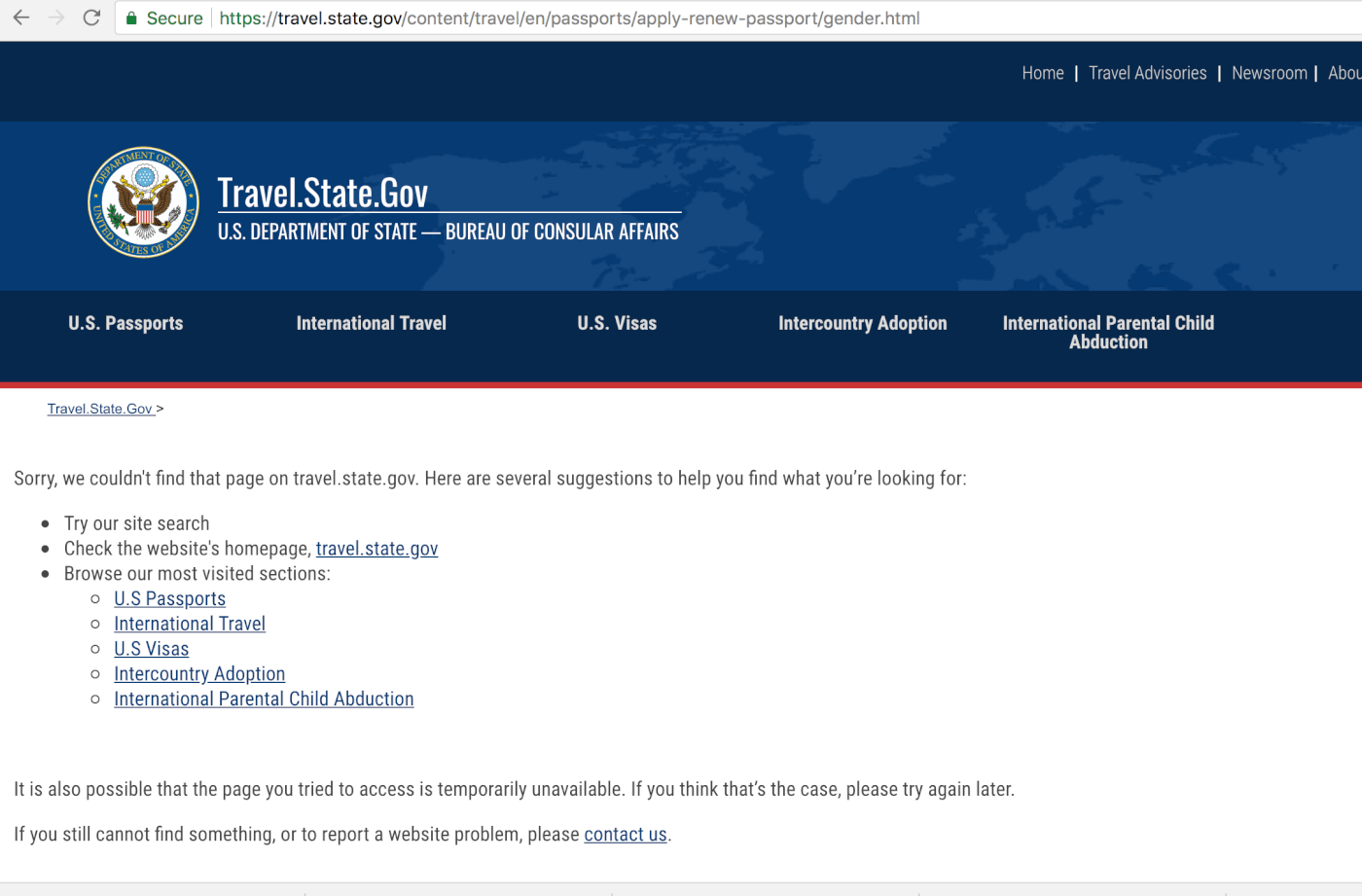 “While ultimately pointless, this move seems designed to frighten, confuse, and keep transgender people from exercising their full rights under the current policy — the same policy we fought for and won in 2010,” said NCTE Executive Director Mara Keisling in a statement. “Transgender people can and absolutely should continue to update and renew their passports. That is our right and that should always be our right.”

The change, however, sends a chilling message to a community already on edge. In July, queer Condé Nast-owned website them published a story suggesting that State Department had begun revoking passports from trans people. NCTE investigated those reports and found they were not part of a larger trend, however.

“These instances that have been reported in the media, we do not feel that they are reflective of a broader policy change at the State Department at this time,” said NCTE Media Relations Manager Gillian Branstetter at the time.

NCTE noted that the new page unnecessarily pointed to a cumbersome provision of the 2010 policy, specifically that trans people in the process of transitioning would given provisional passports.

It also adds a paragraph that reads, “A U.S. passport does not list the bearer’s gender identity. The sex marker on your U.S. passport is based on your evidence of U.S. citizenship and identity, including a medical certification of sex change. The sex marker may not match the gender in which you identify.”

The new page additionally removes resources of the American Medical Association and the World Professional Association of Transgender Health.

Under current policy, transgender people are able to update the gender markers on their passport by providing certification of gender transition.

NCTE stressed that remains the case. More information is available at the NCTE ID Documents Center.