When an officer of the U.S. Army visited Cornell University’s Law School on Friday to sign up new recruits, he had to compete for attention. Brandishing signs declaring “Trans Rights Are Human Rights,” “RESIST” and “Discrimination Anywhere Threatens Equality Everywhere,” the university’s law students asked classmates — as well as the potential recruits — to sign a letter denouncing attempts to ban trans Americans from serving their country.

The Cornell Law Lambda club organized the petition drive right outside the recruitment location, gathering more than 100 signatures on a letter to President Trump and Defense Secretary James Mattis. The letter calls the repeated and, so far, unsuccessful attempts to ban trans troops “unconscionable,” “stigmatizing” and “discriminatory.”

“This is an issue of fundamental discrimination for students who are transgender,” says Cornell Law Lambda President David Eichert, a gay man from Northern California set to graduate in 2020. He told INTO that although he’s not aware of any trans classmates, that wasn’t the point.

“In a school of 800 students, there are going to be transgender people who are maybe not out, and we wanted to make a show of support,” Eichert says.

The law students’ peers in the LGBTQ community applauded their action.

“LeGaL, the LGBT Bar Association of New York, strongly condemns Trump’s bigoted, ill-conceived, and unconstitutional plan to ban transgender people from serving openly in the U.S. Armed Services,” Executive Director Eric Lesh said in a statement to INTO. “Every court to consider the legality of Trump’s hateful proposal has smacked it down. As lawyers and advocates, we stand with the students of Cornell Law School. We applaud their advocacy on behalf of the transgender community and their support for our brave service members. Today, LGBT people face unprecedented attacks from the highest levels of our government. These students and future lawyers make us proud to be part of the legal profession.” 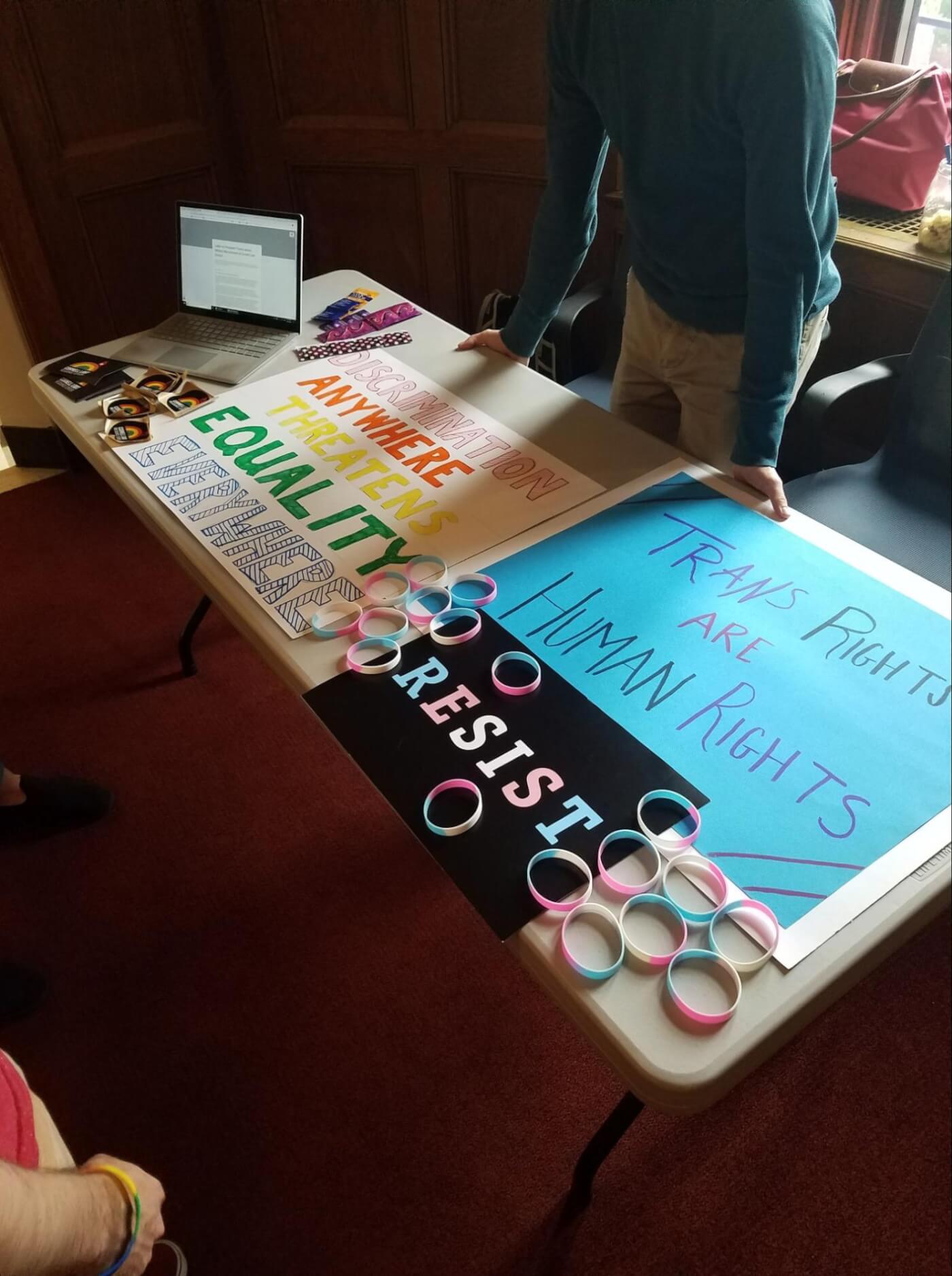 Cornell students are hardly the first to take action in the 14 months since Trump’s infamous July 2017 tweet threatening to ban trans troops. More than two dozen Harvard Law School students staged a sit-in on Sept. 11, 2017, where Army and Air Force recruiters interviewed classmates. Other protests have cropped up from college campuses to the White House. They have been mostly peaceful, but a U.S. Marines recruiting station in Berkeley, Calif. was targeted last month by protesters alleged to be members of Antifa.

Instead of a clash at Cornell, however, the two sides held conversations. Friday’s visit by the Army was the military’s second effort to sign recruits at the law school in two weeks; on September 7th, a recruiter from the U.S. Navy showed up on campus and was likewise confronted by Cornell Law Lambda students.

“We talked with both of them and they were actually really cool people,” Eichert says. “This was really about the politics of Donald Trump, and his administration. Our protest was really about the ban itself, with the goal of discussing transgender issues among the student body.”

“My sense is that law students have always tended to approach activism differently than undergraduates,” says Eduardo Peñalver, the law school’s dean and professor of law, in an email to INTO. “I don’t think the less confrontational tactics our students have adopted in this instance reflect any decline in passion or commitment.”

Cornell was not immune from the violent campus protests that erupted nationwide 50 years ago. Armed black students took over Willard Straight Hall in 1969 to protest racial discrimination on campus. And while conservative-leaning news outlets routinely portray modern liberal-run universities as intolerant and even violent toward contrasting views, Peñalver believes this form of protest was in line with Cornell’s finest traditions.

“The student actions in this case – both in expressing their own point of view and in treating the military recruiters and the students who wanted to meet with those recruiters with respect — were fully in keeping with Cornell’s commitments to freedom of expression and respectful engagement,” Peñalver wrote.

Earlier this month, he issued a statement denouncing the ban on trans troops as an “unprecedented step backwards in the progress towards greater tolerance and inclusion in our nation’s military.” 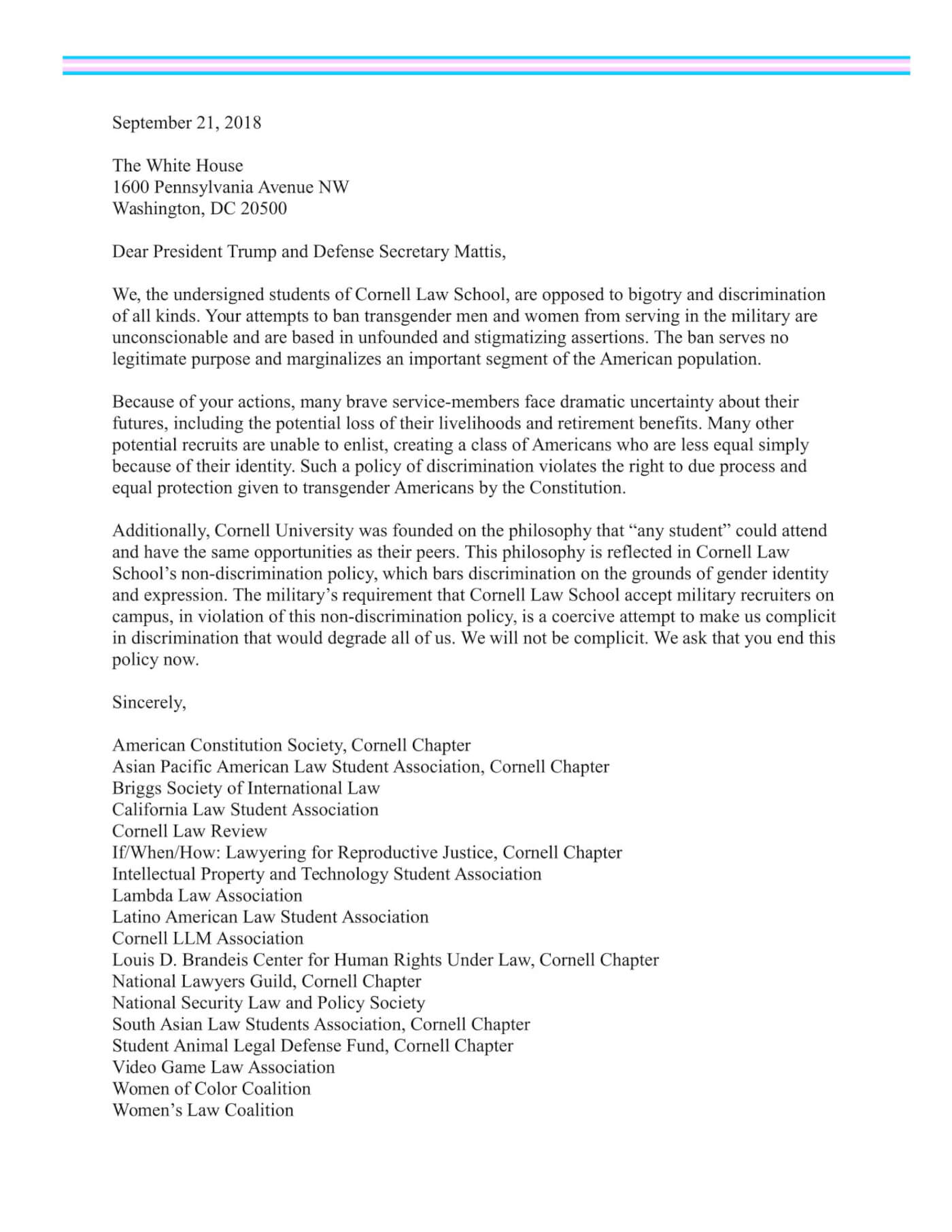 Army Lieutenant Colonel James Tully, a professor of military science and ROTC officer on campus, told INTO via email that he also supported the protest.

“I am happy to see the students at Cornell Law School exercising their right to free speech. This is a very important part of our Constitution and was added as the first amendment for a good reason,” Tully wrote. He added a statement in support of trans troops that commanders of various branches have echoed: “Soldiers in the Army treat everyone with dignity and respect regardless of who they are or where they come from.”

But it’s not like Cornell’s administration had much of a choice. Colleges and universities that accept federal funding are legally required to admit military recruiters on campus. To do otherwise would be a violation of the Solomon Amendment, which gives Defense Secretary Mattis the power to strip schools of that money if recruiters are blocked.

Cornell Law Lambda addressed that issue in its petition letter:

“The military’s requirement that Cornell Law School accept military recruiters on campus, in violation of this non-discrimination policy, is a coercive attempt to make us complicit in discrimination that would degrade all of us. We will not be complicit. We ask that you end this policy now.”

The Pentagon did not return a request for comment as of press time. But there may be nothing to say until this issue is resolved by the courts.

“Thousands of transgender service members are proudly serving our nation today in the military,” said American Military Partners Association President Ashley Broadway-Mack, in a statement to INTO. “Thankfully, the courts have so far blocked the shameful attempts by Donald Trump and Mike Pence to implement their unconscionable transgender military ban. AMPA is proud to be an organizational plaintiff in one of those lawsuits on behalf of our brave transgender service members and their families.”

As of right now, the threatened ban is still being considered by federal judges; the Justice Department’s request to put it into effect was blocked by a federal appeals court in San Francisco in July. The administration could, of course, put the matter before the U.S. Supreme Court.

But until Brett Kavanaugh’s appointment is either confirmed or rejected, it’s unclear if the high court, in its current configuration, would render a decision favorable to the president’s attempt to discriminate against transgender Americans who serve, or want to serve, in our armed forces. And so, trans troops continue to report for duty, and trans recruits keep applying to serve, even if only a very few are accepted. Their efforts are critically important, Eichert said, toward ending discrimination beyond just the armed forces.