Wednesday marked an unlikely reunion in Rowan County. David Ermold and his partner, David Moore, first arrived at the courthouse in Morehead, Ky. two years ago to obtain a marriage license. The Supreme Court had recently legalized marriage equality. The two first met through personals ads posted on The Globe, a since-defunct social networking site, in the late ‘90s. They instantly bonded over a mutual love of Depeche Mode and Tori Amos.

After 17 years of dating, it was like they were already married.

Ermold and Moore were refused that license by a woman with a single long braid who stepped out of her office to tell them the story of Adam and Eve, an attempt to explain why they would not be getting married.

“She was afraid of going to hell and damning her soul,” Moore says of their conversation. 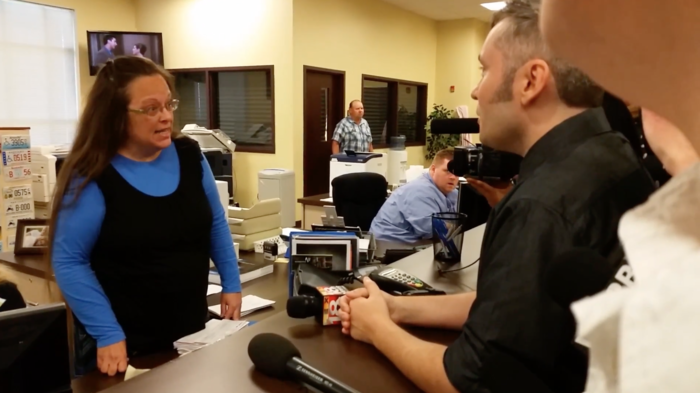 Now the couple was sitting across the desk from her againthis time making small talk about the Christmas season. Last week marked the celebration of “Hometown Holidays” in the little Appalachian town, an idyllic scene complete with carolers, horse and buggy rides, and musicians serenading shoppers at stores along main street.

But this was not a social call. Ermold had come to put his former adversary out of a job.

The 43-year-old filed paperwork on Dec. 6 to run for Rowan County clerk in the 2018 electoral race, as the Associated Press initially reported. His candidacy makes him one of four Democrats to challenge Kim Davis for the position.

Davis became the denim-skirted darling of the religious right in 2015 after spending five days in jail for refusing marriage licenses to four couples, two of whom were opposite-sex couples. Texas Sen. Ted Cruz visited the thrice-divorced clerk in county lockup, calling her imprisonment “judicial tyranny.” Former Arkansas Gov. Mike Huckabee appeared at a rally upon Davis’ release, raising their arms in synchronized exaltation.

The 53-year-old has remained in the national spotlight since the right anointed Davis its martyr du jour. She went on a nine-day tour of Romania in October to lobby against same-sex marriage on behalf of the anti-LGBTQ hate group Liberty Counsel, who defended her in court.

Ermold says that having Davis in office sends the wrong message about what Rowan County stands for.

“Whenever Kim Davis pops up in the news somewhere, it drags our community right back through the mud,” he tells INTO over the phone. “She runs off to Romania and she feels she can tell them what to do and support a referendum in a completely different country. She’s ruining the reputation of a very good community.”

“The focus needs to be on the people who elected her to office,” Ermold continues. “That’s why I’m running.”

The irony of Wednesday’s photo-op is not lost on Ermold and Moore.

Davis served as a deputy clerk in Rowan County under her mother, Jean Bailey, for 27 years before campaigning for a promotion in 2014. She ran as a Democrat. The couple, who voted straight-ticket that year, punched the hole on the ballot next to her name on election day. She defeated Republican John Cox with 53 percent of the vote.

Just over five months after Davis took office, the woman that Ermold and Moore helped get elected would refuse them their Constitutional right to marry.

“I don’t think she has ever been held accountable for what she did,” Moore says. “She still has her job. She got what she wanted. It feels like this person got away with discriminating against a whole group of people, and she hasn’t had to pay for it.”

Davis has continued to dodge accountability for her actions in the two years since.

Rather than forcing the Apostolic Christian to sign her name to same-sex couples’ marriage licenses, she struck a deal with the state of Kentucky. Republican Gov. Matt Bevin took the names of county clerks off certificates entirely. When Ermold and Moore joined with the three other couples to sue her in court over the denial of service, the plaintiffs were awarded $224,000 in court costs.

It wasn’t Davis, however, who paid the fine. Taxpayers footed the bill.

But Ermold says that Davis’ actions have had a galvanizing impact on the local community. Morehead held its inaugural Pride event in August 2016, which also featured the city’s first-ever drag show. Nearly 1,000 people weathered the punishing summer heat to attend.

This year’s event marked another milestone for the Eastern Kentucky town, which counts just under 7,000 residents. Republican Mayor Jim Tom Trent came out to make a proclamation in support of Morehead’s LGBTQ residents, declaring October to be Pride in Diversity Month in the city. Trent quoted the Kentucky state seal in a speech delivered to a packed crowd: “United we stand, divided we fall.”

Ermold and Moore, who sit on the board of the Morehead Pride committee, helped organize that festival.

“I think the amount of people we had come out to those events shows local leaders and politicians that you can’t just ignore the LGBTQ community anymore,” Ermold says. “There are enough people who showed up at those events who could sway a local election easilyin either direction.”

“So I think they’re going to start paying attention,” he adds. 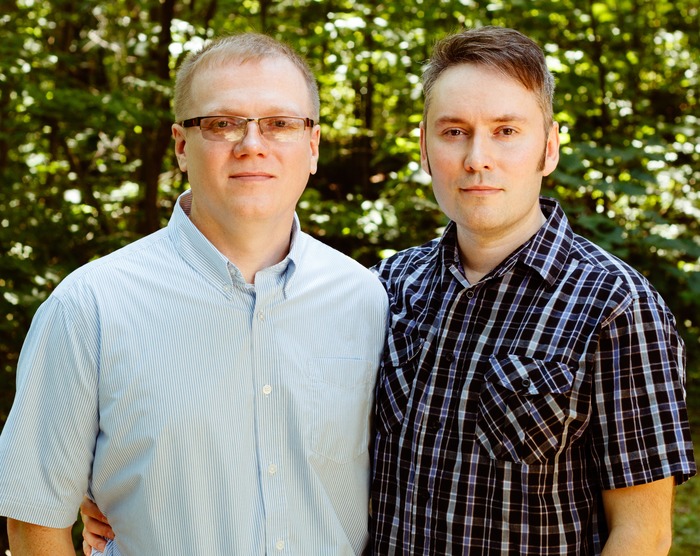 When Ermold mulled entering the 2018 election race, he says local officials told him that Rowan Country “isn’t ready” for a gay county clerk, calling him an “outsider.” He certainly faces an uphill battle: Donald Trump won the county by more than 21 points in last year’s elections, defeating Hillary Clinton 58.5 percent to 37.2 percent.

But Morehead isn’t as conservative as one might expect, Ermold claims. The city attracts a younger, more liberal crowd than neighboring counties due to the presence of eponymous Morehead State University. Engulfed by the Daniel Boone National Forest, the school is known for its basketball team and its nursing program. Students often stay in the city after graduating, putting down roots and raising families.

The mentality in Morehead, Ermold says, is “small town, not small mind.”

The Democratic hopeful believes the local community is preparedand even eagerfor his candidacy. The day of his announcement, his Facebook feed was flooded with messages of support from neighbors and friends wishing him luck in the race. Even comedian Patton Oswalt tweeted to ask if he could be of service.

“I had one young man email me today and say that this was the first time he’s ever contributed to a political campaign,” Ermold claims. “I was honored and humbled he chose me.”

Although Davis is part of what inspired him to run, Ermold wants to bring Rowan County government into the 21st century. One way to do that, he says, is to “completely overhaul” the website for the clerk’s office, a relic of an earlier digital age. A professor at the neighboring University of Pikeville, he also believes that the office has a greater role to play in encouraging voter registration in the area.

But more than anything, Ermold hopes to inspire unity in a town that’s been polarized by the political battles of the past two years. Bringing people together, he says, means meeting with his constituents, getting to know them, and listening to their ideas.

Ultimately it’s not Kim Davis who will decide the race, he argues. It’s the voters.

As Ermold finished filling out his paperwork on Wednesday, his old foe didn’t give him another lecture about the Bible or God’s plan for creation. Davis shook his hand.

“May the best candidate win,” she said.