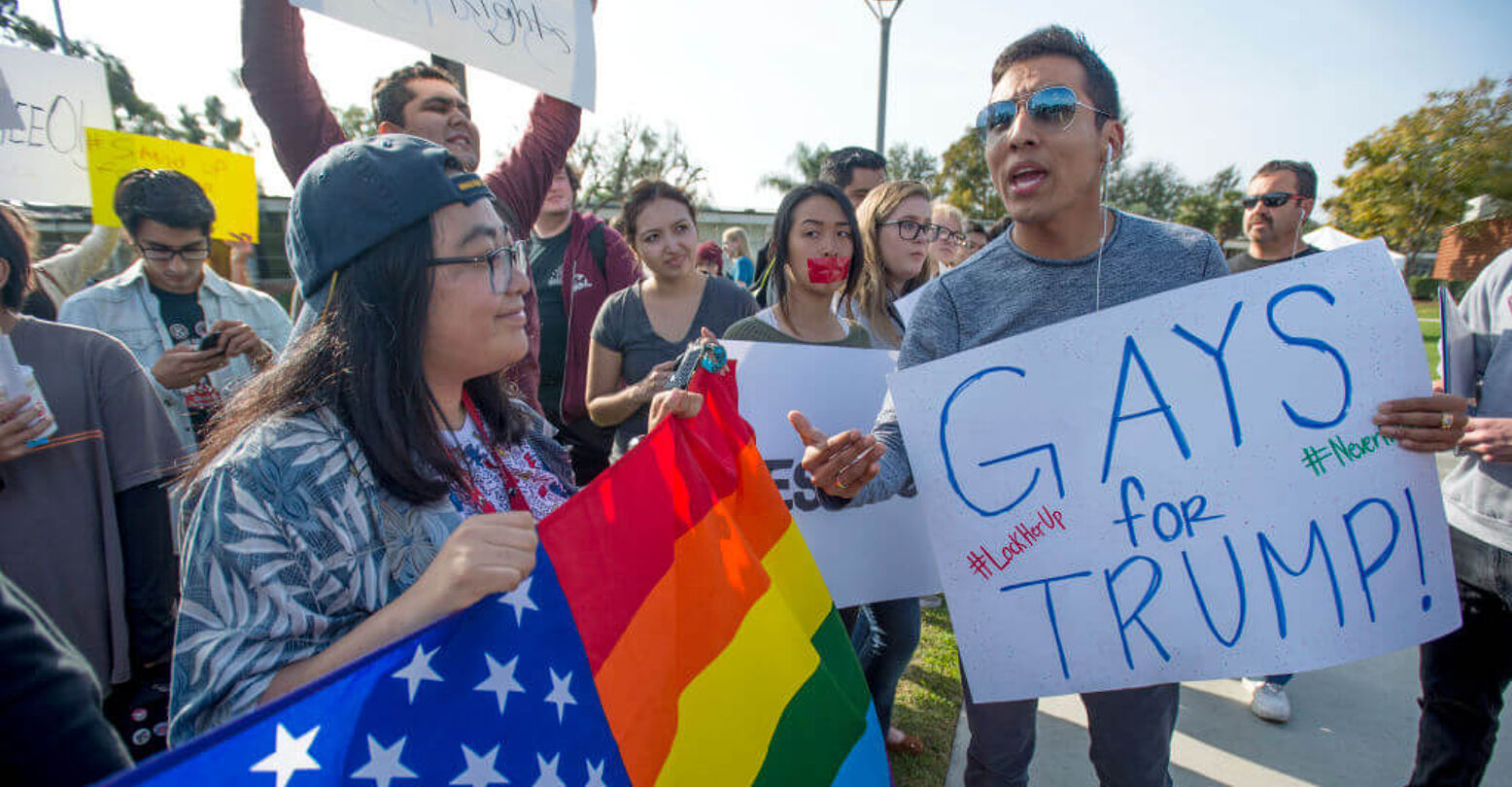 It’s hard enough being a member of the LGBTQ community, but what if you’re an LGBTQ politician representing a party that officially opposes same-sex marriage, transgender rights, and gay couples adopting children?

This past Election Day, voters rejected 14 LGBTQ Republican candidates in their bids for public office — but three gay and trans officials on the GOP ticket will take office after this week’s midterm elections.

Buried in the coverage of the “rainbow wave” that featured at least 399 LGBTQ candidates on ballots nationwide were as many as 17 right-wing candidates who openly identify as gay, lesbian, or trans (none identified as bisexual). Although the GOP could not field one openly LGBTQ candidate in federal-level congressional races, two white gay men and a transgender woman of color emerged victorious in state and local elections.

Althea Garrison will be taking the seat on the Boston city council vacated by Democrat Ayanna Presley. Garrison, 78, is transgender and a perennial politician. Although she ran as an independent this time, she described herself to reporters as a “black conservative” who also has some “liberal” and independent” ideas.

Todd Novak, 53, is a former journalist who won re-election to serve a third term in the Wisconsin State Assembly. Novak’s campaign website makes no mention of his sexual orientation, but news reports from 2014 called him Wisconsin’s first openly gay legislator. Novak did not respond to a request for comment.

In a letter to the editor of Novak’s local newspaper The Cap Times this May, one Madison, Wisc. voter accused the state assemblyman of legislating from the closet.

“Rep. Todd Novak is running scared,” Adam Brabender wrote. “He fails to mention one thing in his recent op-ed  — that he is gay. I would respect him more if some of his legislation were passed into law concerning gay rights. I am not trying to be mean or nasty. I just wish he would say, ‘I am splitting with the Republicans on this issue, because it affects me personally.’”

Skyler Rude, 32, of Walla Walla, Wa. won a seat in that state’s House of Representatives in a landslide. As with Novak, there’s no mention of his being gay on his campaign site or his Facebook page.

When asked if being gay played a part in his run for office, or his plans as a newly-elected lawmaker, Rude told INTO in an email that his sexual orientation has little to do with his career.

“No, being gay did not factor into my campaign,” said Rude. “It was not the reason I chose to run — I chose to run for office because I felt I was the most qualified candidate to effectively serve my district. I think voters here want to know candidates’ positions on issues and their qualifications, not details about their sexuality. As a fiscally conservative, socially moderate Republican, my political views align very well with my district.”

But the truth is, Rude, Novak, and Garrison are as rare as a Southern Baptist pastor officiating at a lesbian wedding.

But Tuesday, 154 LGBTQ Democratic candidates won elected office, in addition to the three Republicans — dramatically increasing the amount of LGBTQ representation in government.

While three LGBTQ Republicans found victory, most didn’t. Connecticut’s Mary Fay was among those who lost.

On Tuesday, Fay campaigned alongside her wife, Mary Smith, outside Bristow Middle School in West Hartford, Conn. In between greeting voters on their way into and out of the polling place, Fay spoke with INTO about her candidacy to represent that very progressive town in the Democratic-controlled state House of Representatives.

Fay was once a Democrat, but switched parties because she “felt that the financial situation wasn’t being addressed by the powers of the Democrats who have been in place for 40 years.”

She believes being a lesbian didn’t factor into her candidacy at all.

“I think that’s so ‘yesterday,’” she said. “That shouldn’t even matter in terms of who we are as a person. Of course, it’s part of your identity, but it’s not all of your identity.”

Fay distanced herself from Trump and called him “despicable” for his policies toward transgender Americans. That said, she did endorse his economic policies. “We’re lagging behind every financial metric and I felt that the Republicans had the best plan to go forward,” she told INTO.

Voters did not agree. Not only did Fay lose in a landslide to Democrat Jillian Gilchrest—72 to 28 percent—but voters restored Democrats to the majority in the State Senate, in addition to securing Democratic control of both houses of the General Assembly.

Fay was just one of six openly gay Republican hopefuls who ran in Connecticut, setting a state record for the most LGBTQ Republicans to ever run for office in the same election cycle. The General Assembly has no out gay, lesbian, bisexual, or transgender Republican legislators. But it wasn’t always that way; in 2014, John Scott became Connecticut’s first openly gay Republican to serve in the General Assembly. Scott lost in 2016 and again on Tuesday. He was defeated by Democrat Christine Conley this week.

Other gay GOP losers include devoted Trump supporter Peter Boykin, founder and president of Gays for Trump. Boykin’s bid for a seat in North Carolina’s House of Representatives on Tuesday ended in a humiliating defeat to Democrat incumbent and pastor Amos Quick, 76 to 23 percent.

San Diego voters handed a crushing defeat to Republican Bonnie Dumanis who, in 2003, became the first openly gay prosecutor in the country and the first woman to serve as D.A. in the county’s history. Dumanis lost to former Marine and former Republican Nathan Fletcher, who won nearly 66 percent of the vote.

After openly gay incumbent State Sen. Dan Innis of New Hampshire lost to his Democratic challenger, he told reporters: “Life goes on, and it was an honor to serve.” Innis, 55, supported the push for a transgender rights law in New Hampshire but lost a battle to ban conversion therapy.

Back in Connecticut, Fay said post-election she plans to continue her role as a town councilor, and gear up for the next legislative campaign in 2020. “I’ll probably run again,” she said. “I’m not one who gives up easy. I’m very persistent.”

Whether that will be enough depends on several factors, not the least of which is the opinion of Fay’s wife, Mary Smith. She made clear she supported her spouse’s political ambitions, but joked that she might have saved them both a lot of trouble, if only Fay had heeded her advice: “Please don’t run.”

GOP bosses may well offer that same message to the next round of LGBTQ Republican hopefuls, given the current crop’s dismal performance at the polls this week.