Donald Trump became the first sitting president to speak at the Values Voter Summit on Friday with a keynote address directed to his religious conservative base. He mentioned “God” nine times and “religious liberty” four times.

In a typical stream-of-consciousness speech, Trump discussed a recent memo from the Justice Department which would allow federal entities to discriminate against LGBTQ people and an executive order to undercut the Affordable Care Act. A Thursday declaration from the president acted to deregulate the marketplace, which will allow the introduction of cheap, poor quality insurance that critics say will drive up premiums.

“[O]ne by one it’s going to come down, and we’re going to have great healthcare in our country,” Trump claimed.

Even more alarming than what the president actually said was who was in the audience for his speech. The annual conference, which is put on by the anti-LGBTQ hate group Family Research Council, is a who’s-who of the extreme right. This year’s speakers amount to a clown car of homophobes and bigots with a long history of attacking the community.

Here are just a handful of names from the Summit’s list of honored guests. 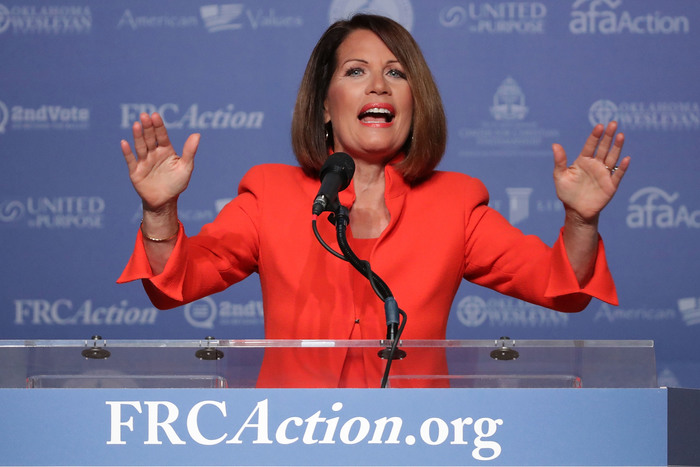 The former House representative and failed presidential candidate is one of the most reliably anti-gay figures on the far right.

When Arizona attempted to pass a law that would allow businesses to discriminate against customers on the basis of sexual orientation or gender identity, Bachmann claimed that the LGBTQ community had “bullied the American people” and “intimidated politicians” into killing the bill. The Minnesota politician, whose husband once ran a conversion therapy clinic, has claimed LGBTQ people are “part of Satan” and represent “a very sad life.” 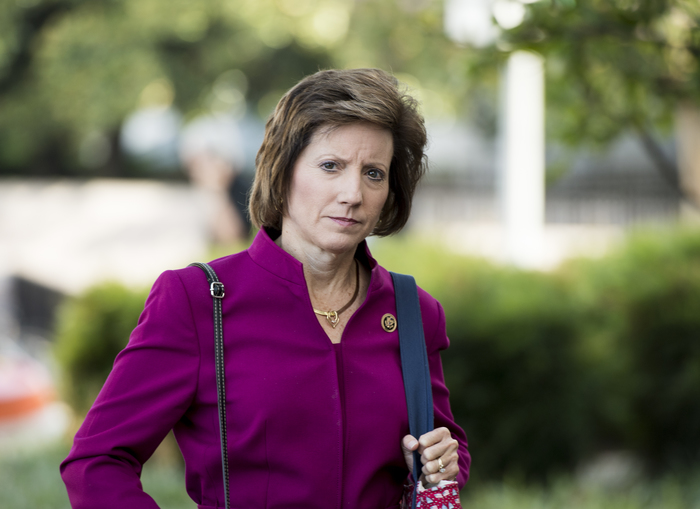 The Missouri politician was once described as the “most anti-gay candidate in America” by Mother Jones, which is saying something given the competition on this list.

Hartzler’s work to bar same-sex couples from wedding in her home state triggered a slew of constitutional amendments banning marriage equality in 2004. Eleven states would follow Missouri’s lead in restricting the rights of LGBTQ couples. The House representative has also worked to permit discrimination against queer and trans students in Washington, D.C. schools and pushed to deny transition-related care to transgender troops.

The 57-year-old even compared trans people to terrorists.

“At a time when we should be focusing on the threats from North Korea, and Putin, and ISIS, we’re having to deal with a threat here at home a domestic threat of allowing transgenders [sic] in our service,” Hartzler said, “which is a real problem because it impacts their readiness, and it’s a huge cost for our military.” 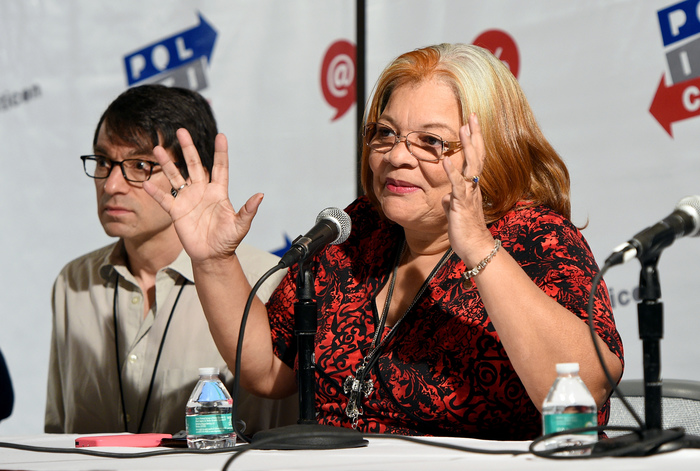 Martin Luther King had a dream, but his niece, Alveda King, has worked to make sure LGBTQ people don’t get to share in it.

The Fox News contributor is one of the most loudly anti-LGBTQ voices on the conservative network, famously comparing marriage equality to genocide. King believes that homosexuality is a “knockoff” orientation invented by Satan, has referred to same-sex relationships as just one component of a “three-headed monster,” and thinks gay people cause natural disasters.

In 2015, King attended a Jamaica rally in support of anti-gay sodomy laws in the Caribbean nation. 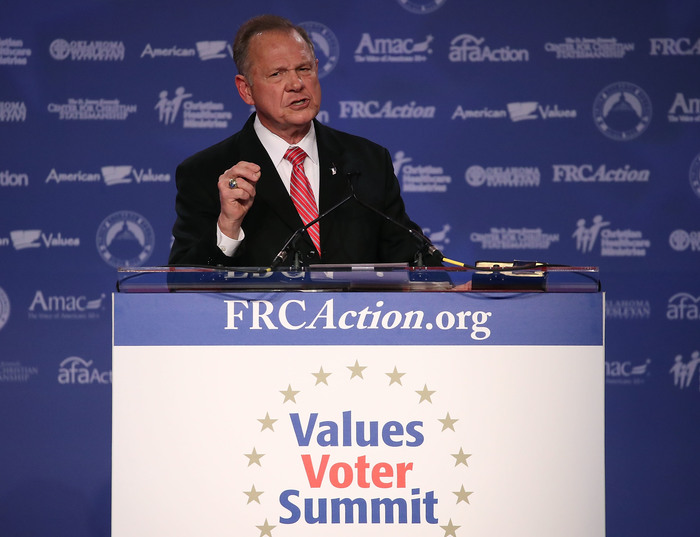 Almost no one on this list hasexpended as much of their breath condemning LGBTQ people asformer Alabama Supreme Court justice Roy Moore.

Moore, who was suspended from the bench for trying to block same-sex marriages in 2015, believes that homosexuality should be illegal. When asked whether LGBTQ people should face the death penalty during a radio interview with “Kill the Gays” pastor Kevin Swanson, Moore said he wasn’t sure. The far-right zealot also claims that gay people are responsible for September 11, thinks same-sex couples shouldn’t be able to adopt, and believes marriage equality is as bad as slavery. 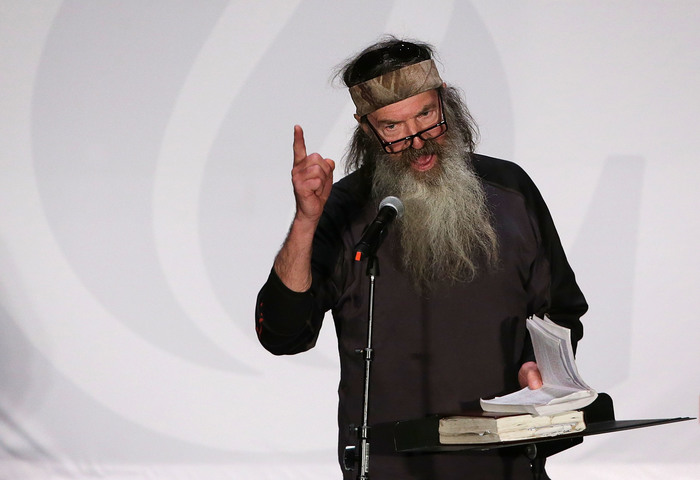 The Duck Dynasty star was suspended by A in 2013 following a GQ interview in which Robertson compared homosexuality to promiscuity and having sex with animals.

The reality star, whose once-popular show ended last year, hasn’t calmed down in the past four years. Robertson has claimed that syphilis, gonorrhea, and HIV result from “immoral conduct,” hinting that God directly punishes people with STIs. He lobbied in favor an anti-transgender bathroom law in North Carolina, claiming that transgender women shouldn’t be able to use the women’s restroom just because they “feel” like a woman. 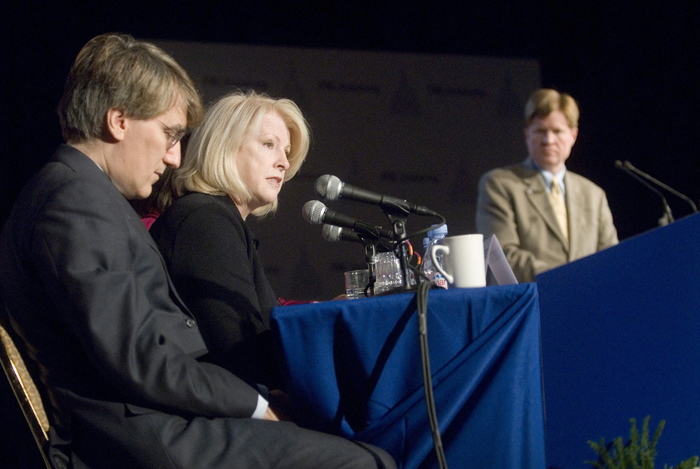 A senior fellow at the Family Research Council, Sprigg thinks he has a solution to the devastatingly high rate of suicide among LGBTQ youth: discourage kids from being gay. Unsurprisingly, he sits on the board of a group that promotes conversion therapy.

The ex-gay advocate has compared homosexuality to smoking, claiming that same-sex behavioris “harmful to the people who engage in it and to society at large.” Sprigg, who believes that homosexuality should be illegal, claims that the LGBTQ movement has engaged in “intimidation” and “emotional blackmail” to further its rights.

He also suggested that the United States should “export homosexuals.” 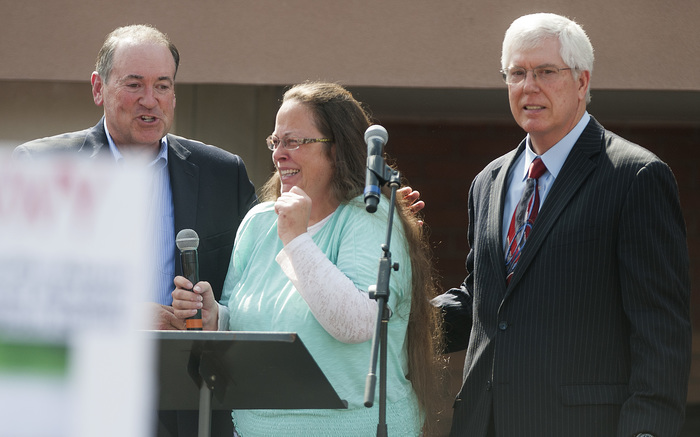 Staver is the president of Liberty Counsel, the Orlando-based law firm that has represented Kim Davis in numerous lawsuits stemming from the Rowan County, Ky. clerk’s denial of marriage certificates to same-sex couples. The anti-LGBTQ organization recently took Davis on a nine-day tour to lobby in favor of a plebiscite to ban marriage equality in Romania.

The Liberty Counsel head has compared gay people to Penn State coach Jerry Sandusky, who was convicted of 52 counts of sexual assault in 2013. Most of his victims were young boys. Staver has referred to LGBTQ-inclusive hate crime protections as part of the “radical homosexual anarchist agenda.” He also thinks workplace nondiscrimination policies protecting LGBTQ people from being fired on the basis of their identity are “dangerous and discriminatory.”

Ever on brand, Staver compared the Supreme Court’s decision on Obergefell v. Hodges to the infamous Dred Scott ruling, in which SCOTUS found that African-Americans weren’t people. He claimed both deserved to be in the “trash bin of history.” 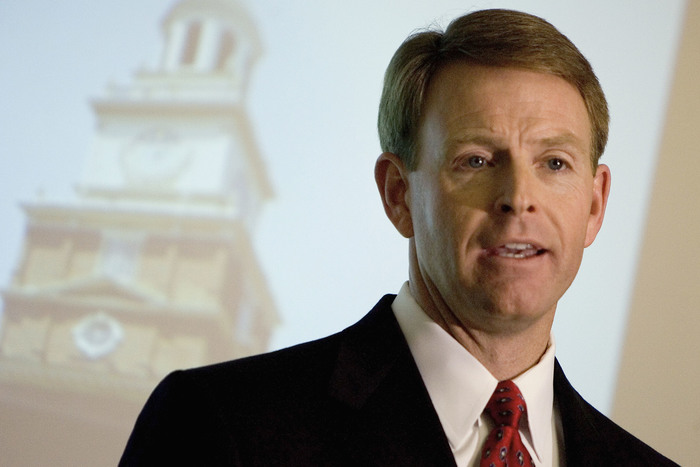 The Family Research Council president is in a class of his own when it comes to homophobia.

Perkins is possibly the nation’s most influential anti-LGBTQ conservative, reportedly advising on Trump’s ban on trans military service and a memo issued by the Justice Department on Friday furthering “religious freedom.” He was recently described by ThinkProgress as a “regular at the White House.”

The FRC head has a record of bigoted statements on the LGBTQ community so extensive that it could be the subject of its own article. Perkins has called queer and trans people “intolerant,” “hateful,” and “vile.” He once compared LGBTQ rights advocates to terrorists and equated homosexuality to mass murder. Perkins also believes that queer people are going to “start rolling out the boxcars” to send Christians to concentration camps.

The 54-year-old, who thinks that gays have an “emptiness within them,” famously called the “It Gets Better” campaign “disgusting.” Calling the project a “recruitment effort,” Perkins said that sending affirming messages to LGBTQ youth is a “deceptive lie.”

Author’s Note: Prior to getting elected, Trump once vowed to be a “friend” to the LGBTQ community.