After being turned away by three foster care agencies in two states, Chris Phippin and his husband, C.J., were almost ready to give up.

Two years ago the couple set up meetings with two local agencies in Texas, where they lived at the time. One foster care agency made it clear in a phone call that they would not be willing to work with prospective gay parents. The other agency came to their home for a face-to-face interview, and a representative asked if the “wife of the house” was available. Phippin explained there was no wife.

Although Phippin says the representative kept the conversation “short and sweet” — promising to email with more information — the couple got an email later that day informing them that the agency didn’t feel their household was a “good fit” for a child.

They didn’t believe that children raised by gay couples have what they “need to be productive and successful in life,” Phippin recalls.

The pair wondered if they were “setting themselves up for failure.”

“We’ve both been through rejection,” Phippin says over the phone. “Coming out and being openly gay, everyone kind deals with rejection at some point or another. We said, ‘Let’s put a pause on this.’”

Phippin’s job, however, relocated them to Tennessee and the couple decided to try again months later. Although his mother warned him that it was still the Bible Belt, he hoped things would be different. At first, they weren’t. The first foster care agency he reached out to claimed the Phippins “did not fit the profile” of what they were looking for in forever homes for children.

Although representatives never stated the refusal was motivated by the couple’s sexual orientation, Phippin had been rejected enough times by this point to understand what those words really meant. After all, he made a decent living, was in good health, owned his home, and had no other kids.

“I knew that it couldn’t be any other things,” he says. “It could only be one thing.”

The Phippins were finally accepted by a foster care placing agency on their fourth try, and through that program, the couple later adopted their sons Chase and Sheldon — who recently turned seven and nine, respectively. In a video released last week by Human Rights Watch, Phippin warns that the discrimination they experienced could prevent children from being placed in loving, happy homes like theirs.

It may be harder, however, for same-sex couples to adopt if Republicans successfully enact legislation which passed the House Appropriations Committee last week. Introduced by Rep. Robert Aderholt (R-Ala.), it prohibits state government agencies from taking action “against a child welfare service provider based on the provider’s religious or moral beliefs.”

For example, if California — one of just three states to explicitly ban all forms of anti-LGBTQ discrimination in adoption — were to strip the license of a foster care agency for denying placement to a same-sex couple, the state could face a 15 percent reduction in federal funding for child welfare programs.

Critics of the bill — known as the Aderholt amendment — say its passage would permit adoption and foster care centers to discriminate against not only LGBTQ couples but any potential family that doesn’t align with the agency’s faith beliefs. Religious entities like Catholic Charities and Bethany Christian Services could turn away single parents, divorcees, Muslims, interfaith families, or interracial couples.

In the case of Jamie McGonnigal, the amendment means his newborn son might have different parents.

McGonnigal and his husband, Sean Carlson, live in Washington, D.C. but fostered their child through Children’s Choice, a Baptist adoption agency in Maryland. Because Maryland is one of five states prohibiting discrimination on the basis of sexual orientation (but not gender identity) in child placing centers, refusing the couple based on their identity would be illegal.

“If this law were to be passed and they were to decide that they didn’t want to serve LGBTQ couples,” he tells INTO over the phone, “this little boy that’s in my arms right now might very well not be placed with us simply because some people decided that because we’re gay, that we should not be parents.”

“I would feel like the rug was ripped out from under me and that all the work that we have done to be accepted as a family would be ignored,” McGonnigal adds. 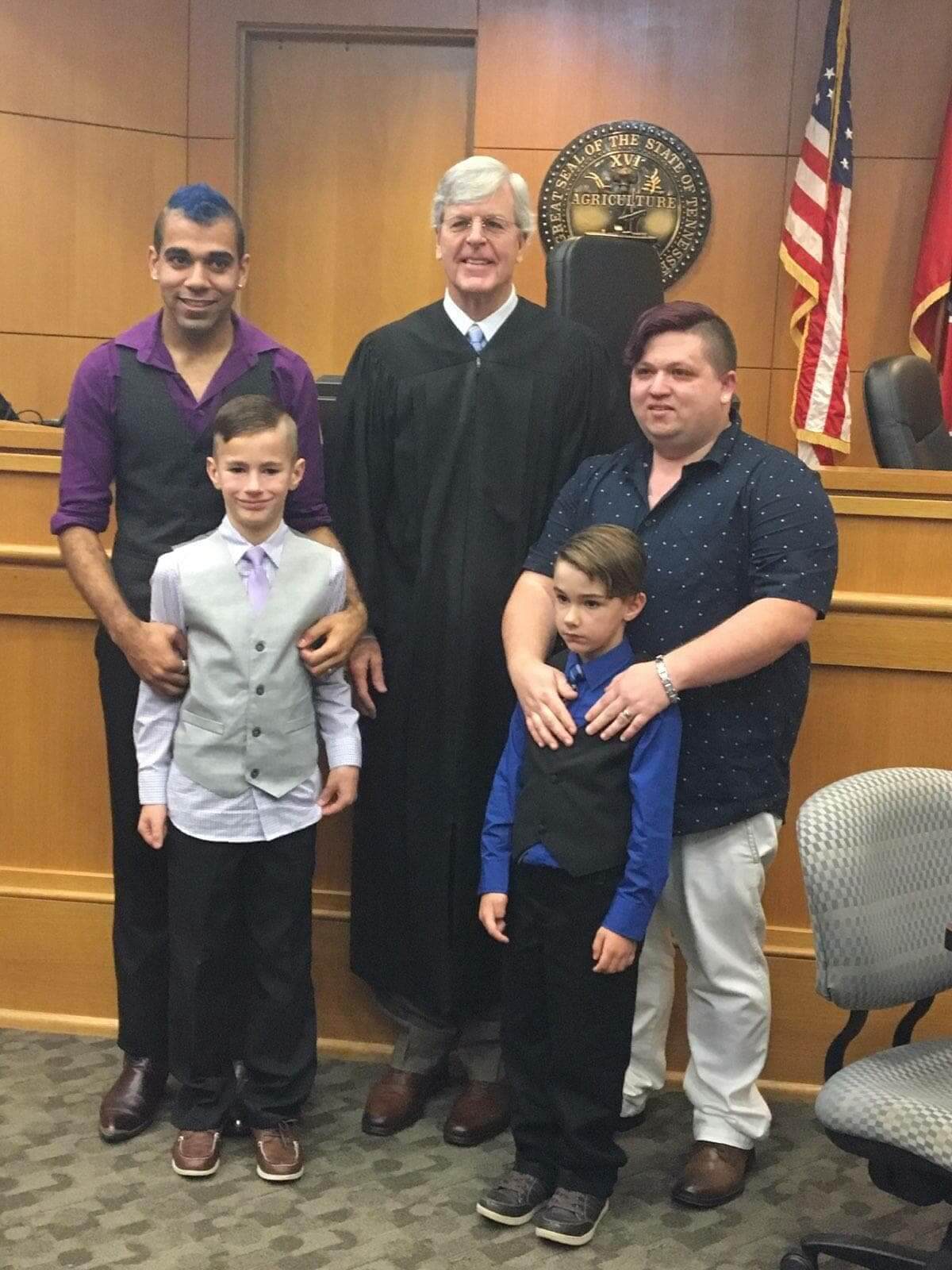 Despite impact they have on families like McGonnigal’s, proposals like the Aderholdt amendment have become more common at the state level in recent years. Just this year the states of Oklahoma and Kansas both passed legislation permitting placement agencies to slam the door on LGBTQ couples.

Supporters of religious liberty adoption laws say these protections are necessary to ensure that child placement centers aren’t forced to violate their faith beliefs. Even prior to the Supreme Court’s decision legalizing marriage equality in June 2015, agencies in California, Illinois and Washington, D.C. shut down to avoid placing children in same-sex households.

Aderholt has claimed his intention is not to discriminate but to ensure these centers can continue assisting children in need. More than 400,000 children in the U.S await placement every single day.

“As co-chairman of the House Coalition on Adoption, my goal was straightforward:  to encourage states to include all experienced and licensed child welfare agencies so that children are placed in caring, loving homes where they can thrive,” he says in a statement. “We need more support for these families and children in crisis, not less.”

Statistics show the shutdown of religious services in the states cited above didn’t have an impact on overall rates of adoption and foster care in those states.

When Catholic Charities of Boston closed up shop in 2006, the number of adoptions increased by 12 percent over the next three years, as the Human Rights Campaign reports. Between the years of 2007 and 2009, nearly half of children (47 percent) in need of homes were placed within a year. The rate from 2004 to 2006 was significantly lower — at 42 percent.

Critics of the Aderholt amendment say these proposals will actually have the opposite effect — dramatically lowering the pool of potential families. LGBTQ couples are seven times as likely as heterosexuals to provide a home to a child in need, according to research from UCLA’s The Williams Institute. 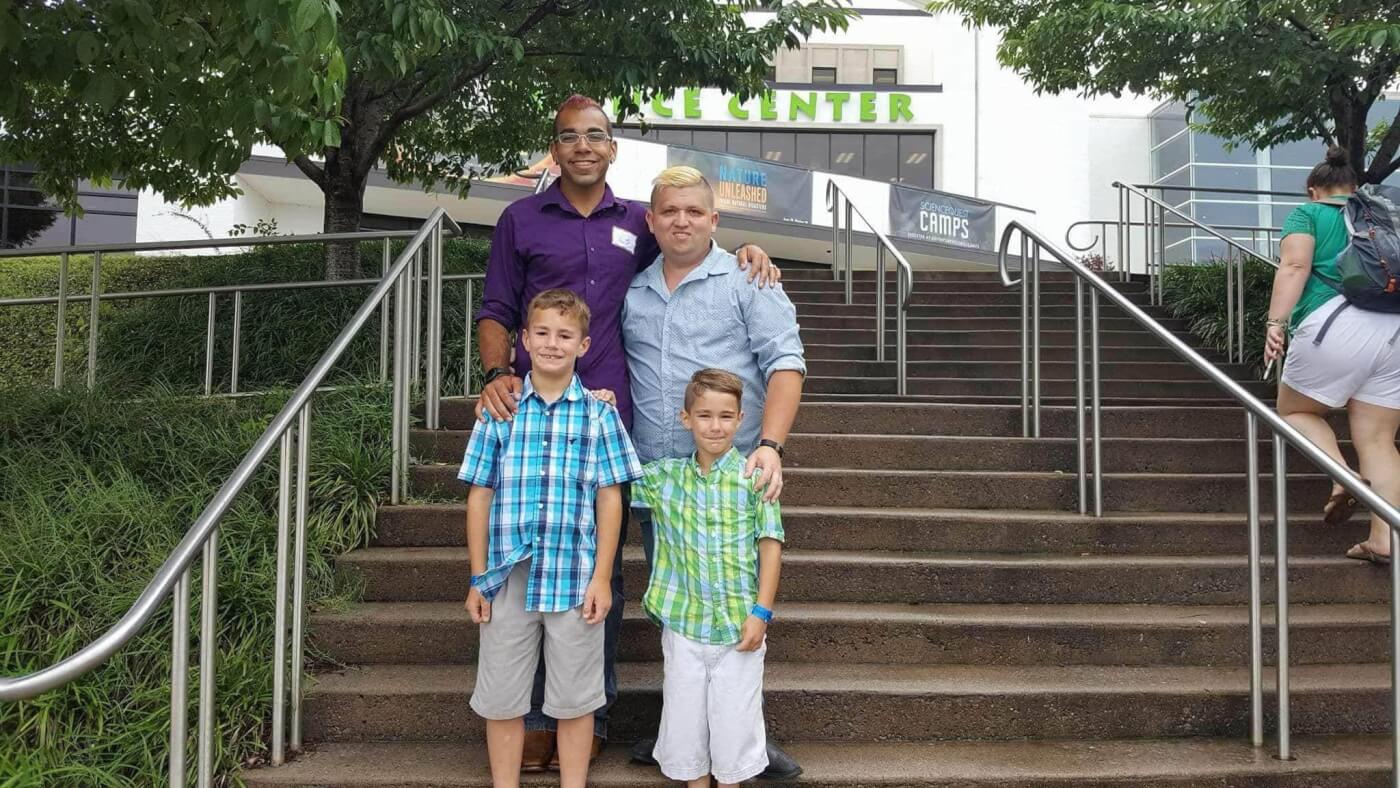 Meanwhile, other reports show that many as one-fifth of U.S. same-sex households have sought adoption or foster care services.

Although Phippin and his husband had the option of seeking out a surrogate, he claims same-sex couples understand the plight children in the foster system face — and that spoke to him personally as a gay man. Phippin himself was adopted. His mother left when he was four years old. His father, who was in the Marine corps at the time she left, came home to find him abandoned.

But two years later his father started dating a woman who later adopted Phippin as her son.

“We, as a community, have faced a lot of challenges in our lives and we’ve overcome it,” he claims. “We know what it feels like to feel rejected and to feel alone, and I think that we can relate to these children so much more because we’ve been in their shoes, just in a different situation.”

In seeking out foster services, the couple specifically worked with children who have experienced extreme trauma. When Chase and Sheldon first came to them two years ago, the boys had been through 11 homes in 756 days.

Phippin remembers them as “unruly kids.” “Nobody could handle them,” he says.

That’s why LGBTQ couples are fighting back against the Aderholt amendment by sharing their stories. Although critics of same-sex adoption claim two men or two women aren’t fit to be parents, the Phippins’ home was the only household Chase and Sheldon had thrived in after a dozen attempts. Within three months, the boys were calling their new foster parents “Dad” and “Daddy.”

In fact, when C.J. went to file his name change paperwork to adopt his husband’s last name, Chase and Sheldon asked if they could change theirs, too.

“These two little boys, we didn’t choose them,” Phippin says. “They chose us.” 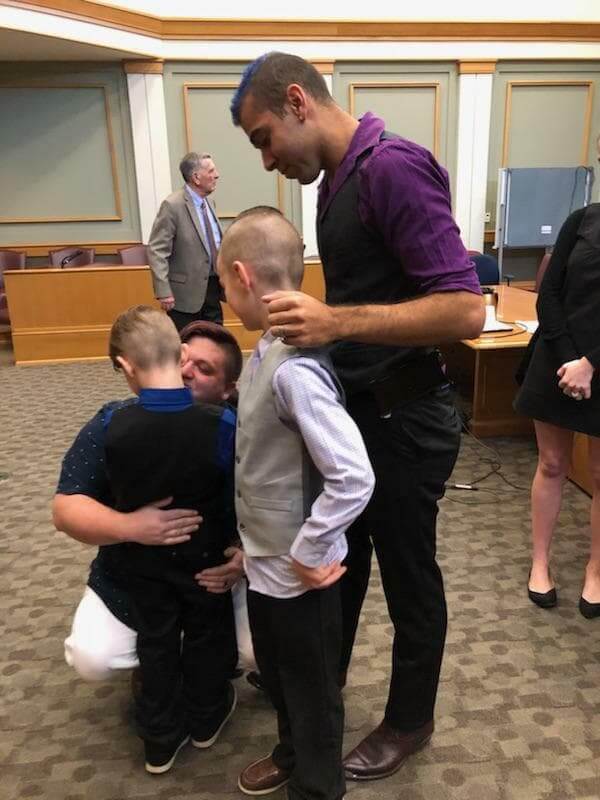 In addition to the Human Rights Watch video featuring Phippin’s story, McGonnigal started a Care2.org petition blasting the anti-LGBTQ amendment. In an appeal signed more than 30,000 times, he claims children in foster care and adoption agencies “are waiting an average of two years to be placed in a home.”

“We need more parental candidates, not fewer,” McGonnigal writes. “There’s no rational reason for this rule in the first place, which is why we’re asking Rep. Aderholt to pull his amendment.”

If Aderholt came over to dinner at his house, McGonnigal claims the lawmaker would see their family is no different than his.