Hillary McDaniel and Kat Kellermeyer held a queer bake sale in protest of the Church of Jesus Christ of Latter-day Saints, which recently announced its support for a Colorado bakery accused of anti-LGBTQ discrimination. The event was held on Monday at City Creek Park, which sits directly across from the Church’s headquarters in Salt Lake City. Almost 300 people attended.

“The bake sale had the feeling of a party, not a protest,” Kellermeyer tells INTO.

“What we wanted to do is show support for the queer community in a fun way,” she continues. “There were no speakers. We put on a buttload of Cher, Lady Gaga, and Katy Perry. We danced for almost two hours straight.”

The idea came to them almost by accident. The Mormon Church announced on Sept. 11 that it would be joining groups like Christian Legal Society, National Association of Evangelicals, and Orthodox Jewish Congregations in filing an amicus brief in the case of Masterpiece Cake Ltd. v. Colorado Civil Rights Commission, which is pending before the Supreme Court.

Charlie Craig and David Mullins allege that in 2012 they were denied a cake for their wedding ceremony when the bakery learned it would be for a same-sex couple. The owners claimed they had a right to refuse them service on the basis of their sincerely held religious beliefs.

The Colorado Civil Rights Commission ruled that Masterpiece Cakeshop had violated the state’s anti-discrimination law, but the business appealed the decision. 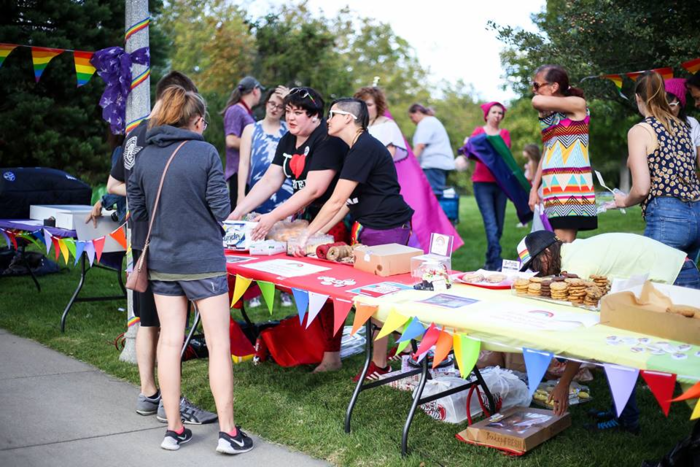 That case will be heard by the nation’s highest bench sometime this year.

McDaniel, 37, says that she and Kellermeyer went to a local bakery to “eat [their] feelings” after the Mormon Church sided against the LGBTQ community for the second time this year. LDS officials also signed onto a brief in Gavin Grimm v. Gloucester, in which a trans high school student fought for his right to use the bathroom appropriate to his gender identity. The Church argued that administrators had the right to set their own policy.

“Every time they do something like this, it hurts,” McDaniel says. “Just as the wound is beginning to scab over, they come and rip it open again.”

While strategizing on how to respond to the Church’s continued support for anti-LGBTQ interests, the two thought it would be funny to have a bake sale in which “straight people were charged double,” Kellermeyer says. But they soon realized that behind the joke was a novel idea, one that came to fruition in the span of just three days.

They first met to discuss the idea on Thursday. The bake sale was held Monday.

The concept was simple: Volunteers handed out paper bags to attendees, who then filled them with baked goods from participating businesses. Donations were on a pay-what-you-can basis. Some people gave $1, others $100.

The bake sale turned out to be a smashing success. The organizers raised more than $2,200 the day of the event, all of which will be given to the Utah Pride Center to fund a support group for LGBTQ survivors of suicide. The community center, which is located in Salt Lake City, received an additional $800 in direct donations since the bake sale was announced.

The bake sale is also asking donors to match its fundraising totals. Thus far, they have received an additional $1,000which comes out to over $4,000 in less than a week.

After the campaign wraps, organizers plan on writing the LDS Church a letter telling them to put their money whether their mouth is and donate. Mormon leaders preach unconditional love, McDaniel says, but the Church sends a “mixed message” to LGBTQ youth: “God loves you no matter what, but if you’re queer, you have to change.”

Growing up, Kellermeyer claims that many of her friends were sent to conversion therapy centers designed to “help” them overcome what the Church calls “same-gender attraction.”

“It sends the wrong message to parents,” the 30-year-old claims. “There are a lot of parents who start to hope that their kids will be celibate, be willing to marry someone of the opposite gender, or bury this part of who they are. It’s seen as shameful, not something to be celebrated.” 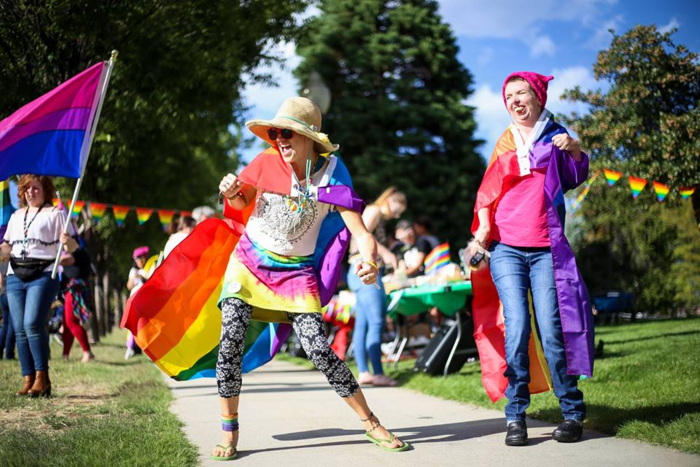 This point was particularly underlined in November 2015, when the LDS Church released a new policy stating that the children of same-sex couples would not be able to receive baptism in the Church. They would henceforth be branded “apostates,” a term for those who turn away from the Gospel. When these children turn 18, they are then faced with a choice: In order to come back to the Mormon faith, they must publicly disavow their parents’ marriage.

After that change in doctrine was announced, advocates reported a wave of LGBTQ youth suicides in the state. Mama Dragons, a network for accepting parents of queer kids, reported that more than 30 youths took their own lives by mid-January. That number, however, has been contested by the Utah Department of Health.

For LGBTQ young people who may be struggling with suicidal ideation, Kellermeyer hopes Monday’s bake sale showed them that the LGBTQ community is resilient and beautiful, even in the face of opposition.

“I want them to see how happy our lives are,” she says. “I’ve got a great life, a great support system, and a great community who loves me no matter what. They might look at us and say, ‘That could be me one day. There’s so much to live for.’ If even one queer kid saw this tiny thing we did and is inspired to keep going, that’s enough for me,” Kellermeyer adds.

The organizers have launched a website called “Gayest Bake Sale Ever!” for LGBTQ people who wish to throw a queer bake sale in their own city. The page is a how-to guide providing instructions on selecting a location, securing a permit, and even creating a playlist.

Kellermeyer says she hopes to see San Francisco join the party next.