Jo Hirst woke up on Sept. 17 to find her family dragged into Australia’s increasingly ugly debate over same-sex marriage.

Hirst, author of the children’s book The Gender Fairy, was the subject of an attack ad from the Coalition for Marriage, a campaign urging Australians to vote “No” in a non-binding plebiscite on marriage equality. The 30-second video warned that same-sex marriage would pave the way for the teaching of “radical sex and gender programs” in schools. It cited excerpts from Hirst’s book as proof.

“Only you can know whether you are a boy or a girl,” Hirst wrote in The Gender Fairy. That quote was displayed against a dramatic black background, designed to heighten the fear of a world where children are allowed to determine their gender for themselves.

“How am I supposed to protect my kids in the future from this stuff?” a concerned mother warns in the ad.

The ad was “incredibly upsetting,” Hirst tells INTO in an interview. This wasn’t the first time that the mother of two, who lives in Melbourne, was targeted by a right-wing smear campaign. It wasn’t even the second time. It was the fifth. 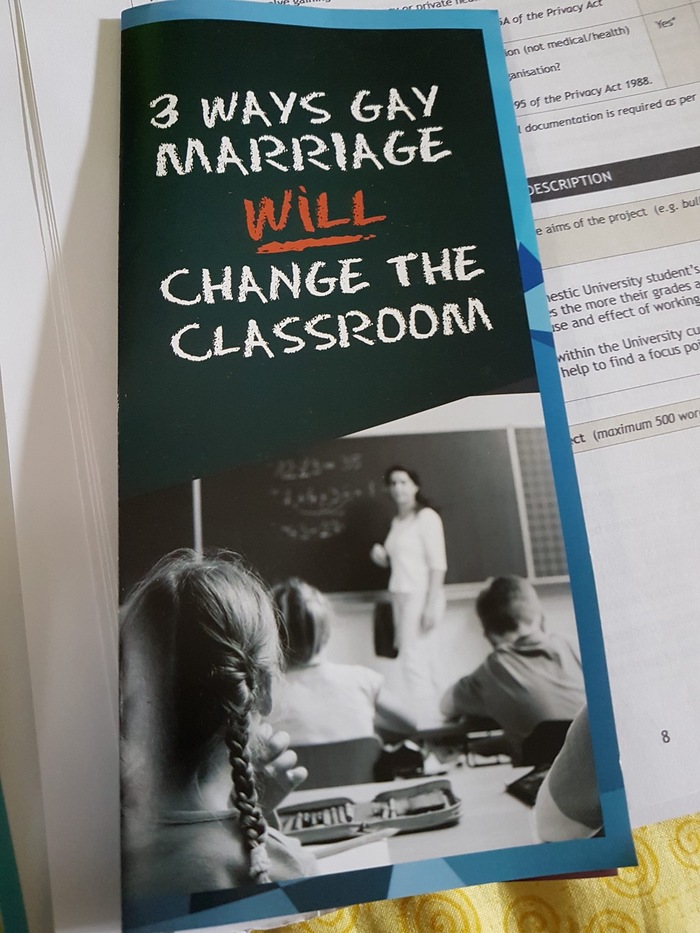 Hirst wrote The Gender Fairy after her six-year-old son, who was assigned female at birth, came out to her as transgender. He found support through his transition from friends, family, and classmates, but Hirst claims that there were almost no resources to help children understand what it means to be transgender.

Her book, which was self-published in 2015, was the first of its kind in Australia. Hirst believes it was an important step forward for trans children and their parents.

“When you’re a transgender child, you think you’re the only person in the world this has ever happened to,” she says. “You think you’re not normal. But they are normal. For parents, this gives them an age appropriate way to explain it to other siblings, other friends, and other relatives. It gives you the right language.”

The Gender Fairy is a FAQ on gender identity disguised as a cute story for kids. A genderfluid fairy answers questions that trans kids reading the book might have: What restroom do I use? What clothes do I wear?

“It’s a book to tell children they’re OK, they’re not alone, and there are lots of others like them,” Hirst says.

The book was widely celebrated after its debut. Hirst claims it even received support from Australia’s Labor and Green Parties. Senator Janet Rice, whose wife is transgender, personally thanked Hirst in an address to Parliament. “Thank you for your contribution to improving our collective awareness and understanding of what life is like for some of our younger transgender members of our society,” Rice said in November 2015.

But things began to turn during last year’s federal elections, as her book began been exploited by religious conservatives to stir up hatred.

The Gender Fairy was singled out in a series of attacks by the Australian Christian Lobby, who claimed that the book was being taught in elementary schools under the country’s Safe Schools Program. A flier distributed by the anti-LGBTQ group called the book “gender-bending political correctness” and said it was “leaving kids confused and denying parents a say in what their children are being taught.”

But the smear campaign really ramped up during the recent debate over marriage equality in Australia.

A prior video from the Coalition for Marriage warned that if same-sex marriage were to become legalized, young boys would be allowed to wear dresses in schools. Dr. Pansy Lai, one of the loudest critics of Safe Schools, claimed that programs advocating gender fluidity would become “widespread and compulsory.”

Hirst claims that her face was even printed on leaflets handed out by “No” campaigners. 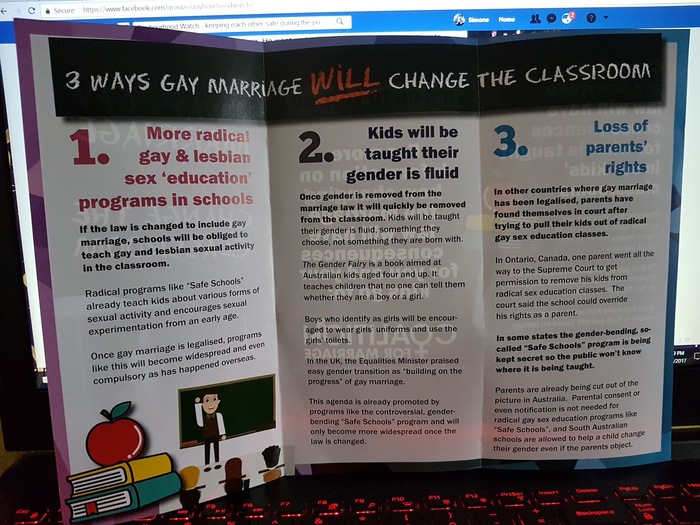 “I feel like my love for my child and for transgender children has been weaponized against them,” Hirst says. “It’s incredibly disturbing.”

These attacks are what precisely what groups like PFLAG Australia warned about prior to the nationwide referendum on marriage equality, which will be conducted through mail-in ballot. LGBTQ advocates told Prime Minister Malcolm Turnbull, who has refused to pass a same-sex marriage bill in Parliament without a plebiscite, that putting civil rights up to a vote would result in vulnerable groups being targeted.

The “No” campaign in Australia has reached a fever pitch of hysteria in recent weeks. Margaret Court, a former tennis champ turned Pentecostal minister, claimed that the passage of same-sex marriage would mean the end of Christmas. She told The West Australian that marriage equality supporters also want to destroy Mother’s Day, Father’s Day, and Easter.

Fliers distributed by marriage equality opponents have compared the LGBTQ community to Nazis, referred to homosexuality as a “curse,” and claimed that same-sex marriage would result in child abuse.

These attacks are absurd, but they are also working. A poll fromThe Guardianpublished Sept. 19 found that support for marriage equality had dropped by four percent in the past two weeks, down to 55 percent. Last year the same survey found that 62 percent of the publicsupports the freedom to marry.

“It seems as though if you repeat the lie often enough, people think of it as truth,” Hirst says.

The author claims that the attacks onThe Gender Fairyhave been difficult on her family. Even though Hirst lives in a “bubble” in her progressive Melbourne community, she worries about what her children might see on television. When her kids tune into watch their favorite programs, Hirst turns down the volume on advertisements. Although her son knows some people “don’t understand,” she wants to shield him from bigotry as much as possible.

“They’ve been completely protected from transphobia and homophobia, and this is the first time I haven’t been able to protect them,” Hirst says.

But her real concern is for children who don’t have the support of gender-affirming parents like herself. Estimates from the Royal Children’s Hospital suggest that 1.2 percent of Australian youth are transgender.

“Many, many families are now finding that they have friends or immediate family members who are questioning the support of their children, even though they are doing exactly what doctors and psychologists told them to do,” she claims. “This misinformation is being spread far and wide through the media and damaging so many children and families.”

What gives Hirst hope amidst the storm are the messages she receives from parents and children saying how muchThe Gender Fairymeant to them. Mothers will send her photos of their kids sleeping next to the book.

“It makes it all worthwhile,” she says. 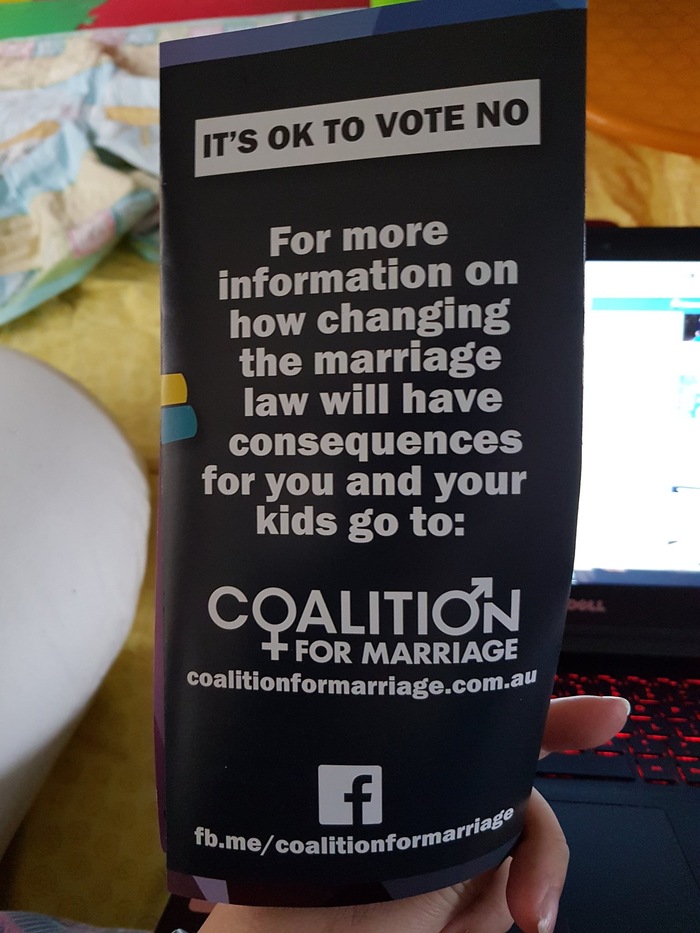