Valerie Hefner’s daughter was told it was illegal for her to use the girls’ bathroom at school.

Arrianna is a fifth grade student at an intermediate school in Sherman, Tex., a conservative town located along the northern border with Oklahoma. She initially came out to her mother in 2014 while they were watching an episode of the docuseries I Am Jazz together. Hefner always knew Arrianna was different, but she thought her youngest child would grow up to be an “effeminate gay man.”

“When she was little, Ari would put shirts on her head for hair,” Hefner tells INTO. “She had always worn my clothes. She had always played in my makeup.”

Arrianna began transitioning at school a year after coming out. Because transgender students aren’t protected in Texas by statewide non-discrimination policies, local districts are left to decide what facilities and locker rooms they are permitted to use. At first, she was forced to use the nurse’s restroom, which opened her up to invasive questions from her peers (e.g., “What do you have between your legs?”).

But this school year, she was finally allowed to go to the bathroom with her female classmates.

The 12-year-old went to the restroom for weeks with no incident until a faculty member tried to send her back to the gender-neutral stall, which would again single her out for scrutiny. Texas lawmakers attempted numerous times during the 2017 legislative session to pass laws targeting girls like Arrianna, but those efforts failed. The staffer was under the impression, however, that the bill passed.

“I had to go up there and I had to have that conversation with [the school],” Hefner says over the phone. “I just went in and told them, ‘There are no laws on the books right now. There are none.’”

“I’m running for state representative because I am planning on doing something about this,” she adds. 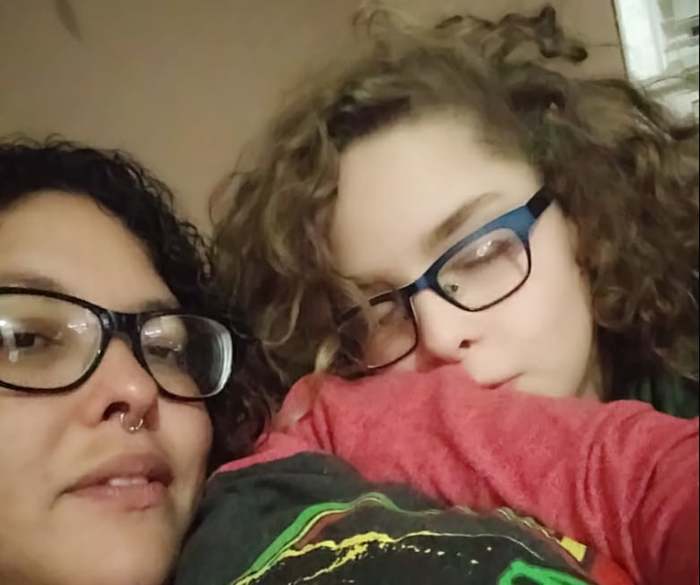 In October, Hefner officially threw her hat in the ring as a candidate for District 62 in Texas’ House of Representativesmaking her the only Democrat who has, thus far, declared their intention to run in the 2018 race.

As a political nonentity in a conservative district, she admits she has her work cut out for her. The district, which encompasses Grayson and Fannin Counties in Northern Texas, has never gone blue in its history. It hasn’t even had a Democratic candidate in the race since 2012, when Eristeo Perez was walloped by a 50-point margin. Republican Larry Phillips has run unopposed the past two elections and will again be entering this year’s race.

“There are no democratic nominees in this area, and there haven’t been in a very, very, very long time. So we didn’t really have a choice,” Hefner says. “I thought, ‘You know what? Someone has got to step up and do it.’”

In defying the odds, the upstart politician hopes to bring change to her state following a year where families like hers have constantly been under attack. Texas introduced more than 20 proposed bills targeting its LGBTQ community in 2017, including several pieces of legislation allowing people of faith to discriminate against queer and trans people based on their “sincerely held religious beliefs.”

Many of those bills failed, but a law allowing adoption and foster care centers to turn away same-sex couples passed in June.

Hefner’s daughter lives this bigotry every day. Arrianna had to be pulled off her bus route because the driver wouldn’t stop calling her by the wrong name, even though the information is listed correctly on paperwork provided to every staff member in the school. Thus, the driver had to go out of her way to use Arrianna’s birth name.

Instead of speaking up about it, the youngster tried to clench her fists and hold her feelings in.

“I didn’t want to become a bad kid,” she tells INTO over the phone, her first-ever interview with the media. “I wanted the teachers to see me as the good kid. A lot of people, they assume if one transgender person is like this, they’re all like this. So I try to stay good.”

“She felt like she had to be a step ahead of everybody else,” her mother adds.

As a parent, she believes she wants the same things for Arrianna that everyone wants for their children: a life free of fear and victimization.

“I want Ari to grow up, have the same opportunities, and be just as successful as any of my other kids,” she says. “I don’t want her to have problems finding housing, finding a job, or being so relentlessly picked on at school that she leaves school and doesn’t get a degree. My goal is to get her to a place in life where she can be happy, healthy, and self-sufficient.”

By running for the House of Representatives, Hefner hopes to start a dialogue with lawmakers who have devoted extraordinary time and effort to denying her daughter’s right to exist.

Being a member of the General Assembly, she says, would give her the opportunity to meet one-on-one with Republican leaders like Gov. Greg Abbott and Lt. Gov. Dan Patrick, who have made anti-LGBTQ discrimination a top priority in their administration. Patrick, one of the nation’s leading opponents of equality, vowed to fight for the passage of an HB 2-style bathroom bill even if it “cost him the election.”

The conservative even compared his crusade against the trans community to the Battle of the Alamo. “[P]eople sacrificed their lives at the Alamo because they believed in something,” he said in a March 2017 speech.

But Hefner believes having someone in the legislature who is personally affected by the issue can help humanize an often invisible population. 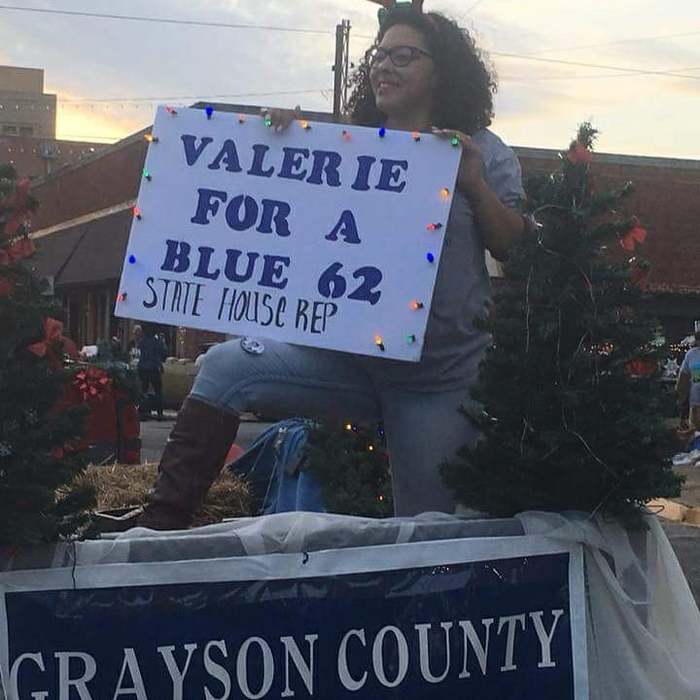 The 35-year-old realizes that she doesn’t look like a typical politician. A high-school dropout who had her first son when she was 16, Hefner’s arms are covered in tattoos. She has a septum piercing and gaged ears. Whereas her Republican opponents are attorneys and former city councilmen, she’s spent the last 18 years raising children.

What she lacks in convention, though, the mother of four makes up for in being a living example of the most American of narratives: dogged perseverance. After getting her G.E.D., Hefner took business courses when she wasn’t juggling the daily responsibilities of motherhood and slowly worked her way up the corporate ladder. She now works as an assistant manager for a medical supply company in town.

But Hefner believes her unorthodox road to public office is what makes her qualified to represent her constituents. Whereas the legislature has spent the past year laboring to discriminate, she knows the actual struggles families in Texas faceshe has lived them.

“I have worked alongside families and women, and their concerns are always the same,” she tells INTO. “There becomes a point within your career where you don’t qualify for help with medical care for your kids, but you don’t quite make enough either to buy [the insurance] your job is offering because the premiums are so high.”

“So there’s this whole population of working parents, their everyday struggle is healthcare for their kids,” Hefner continues. “We have got to do something for this group of people in the middle who are trying their hardest.”

Before last November, the Democratic candidate admits she didn’t think she had much of a shot in a race that didn’t appear to have room for someone with her unique life experience. Sherman is the kind of place, Hefner says, where Democrat is a “bad word.” When she goes out to meet with voters and tell them about her daughter’s story, closet liberals whisper in her ear that they’re “on her side,” as if they’re afraid of being overheard.

While this is partially due to the fear of being a political castaway in a deep red sea, Hefner argues that these voters learn to stay quiet because they’re never had someone to represent their interests in the legislature. The absence of hope becomes silence.

But Danica Roem’s decisive win in the 2017 special elections changed that, she says.

The 33-year-old Virginian became the nation’s first-ever openly transgender state legislator after defeating Republican incumbent Bob Marshall by nine points, a self-described “chief homophobe” who refused to refer to her by the correct pronouns throughout the race.

Like Hefner, Roem isn’t your run-of-the-mill candidate. A former journalist for the Gainesville Times and Prince William Times, she doesn’t have a background in politics. Prior to getting elected to the House of Delegates, Roem was the lead singer in a “drunken thrash metal” band called Cab Ride Home. She ran for office because she wanted to fix up the dilapidated road in her hometown.

Hefner says that she cried on election night because Roem’s landslide win was a sign things could change, both for her and her daughter.

When Arrianna first came out, Hefner immediately started to get connected with members of the trans community to ask for advice and build a support network. What she noticed is that many of the people she was meeting didn’t have high school or college diplomas because they were forced out of school. They had a difficult time finding work or keeping a job, Hefner says, because “people are so ugly to them.”

“This is all stuff that was happening to people that I know personally,” she claims.

“Transgender people have a place in this world, just like everybody else,” Hefner continues. “So seeing Danica win, that’s one of the ultimate things. To get people to actually get up and go to the polls and vote for someone who is different than what they are used to is an amazing feat. That’s all I ever wanted for my child.”