If it were up to Katherine O’Connor, everyone in Massachusetts would be required to have one working doorbell. Just one. Instead of the two you often find in Braintree.

The 15-year-old walks up to a house, rings the first bell, then the second. Does either one even work? Probably not. O’Connor knocks before giving up.

“Great. Sorry, Mickey, you’re not home,” O’Connor says. “The beauty of canvassing. You just wait around all day.”

When you’re a Brazilian, non-binary high schooler canvassing to uphold your basic dignities, every unanswered door is a minor defeat. There are a lot of them.

But for O’Connor, fighting to keep non-discrimination protections in the first statewide trans rights vote has reframed the future. 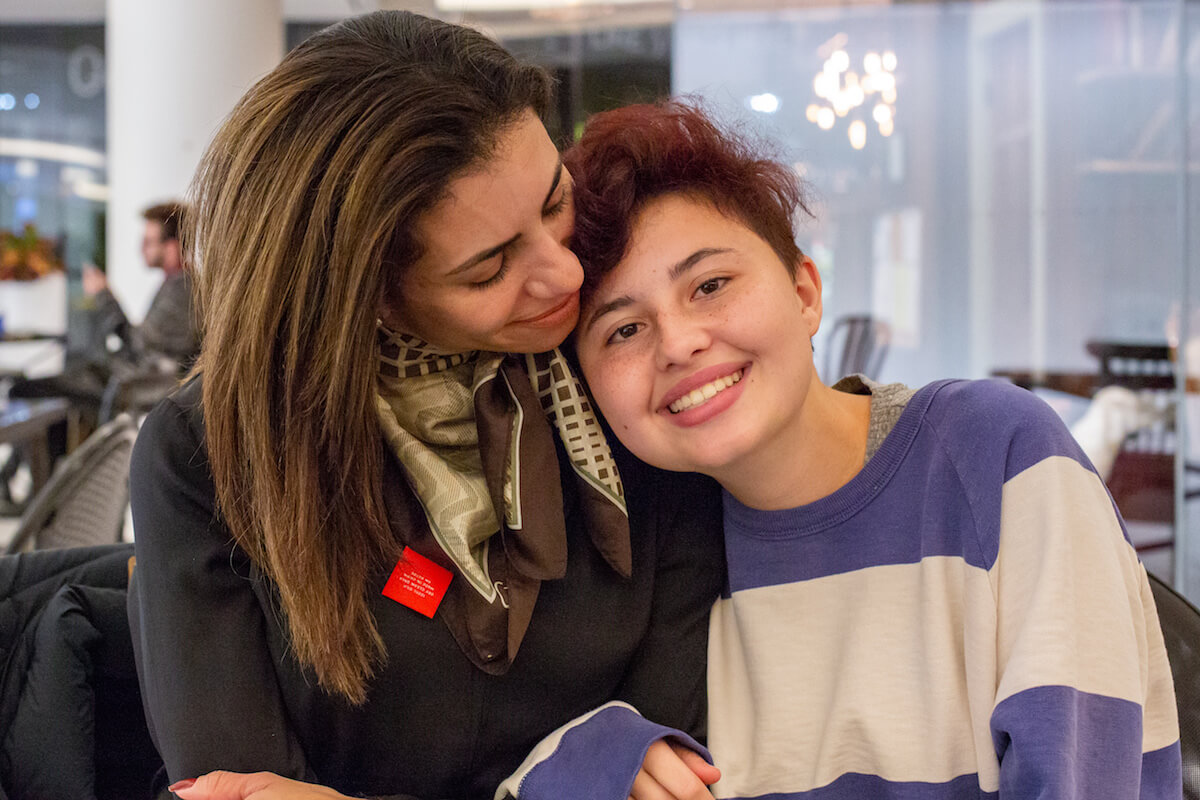 They started identifying as non-binary two-and-half years ago. Their school recognized Transgender Day of Remembrance, the day that remembers murdered trans people each year. O’Connor reached an early and devastating conclusion.

“Oh well, half of us are going to die out before we reach 24 anyway, so like why does it matter?” they said. “It was kind of really, really depressing.”

That outlook changed after O’Connor signed on to the “Yes on 3” campaign six months ago. They immediately signed up for 17 shifts over coffee with a campaign staffer.

O’Connor is a volunteer leader, working alongside trans adults, people who not only lived past age 24 but thrive. Organizers wear name tags with their pronouns. They are doing something active for trans rights. Even when the phone banking and canvassing is difficult, O’Connor feels the script has been flipped. They’re not waiting to perish; they’re working toward a win.

The Massachusetts campaign to uphold the state’s public accommodations protections for trans people has positioned itself as the first line of defense against the Trump administration’s moves to strip away transgender rights. A Yes on Question 3 could slow the momentum of anti-trans activists throughout the nation. A loss in the liberal state could have the opposite effect.

O’Connor has gone all-in on the fight, sometimes to the detriment of everything else.

“I should probably get more than five hours of sleep tonight, oops,” they say, recalling that they need to study for a test after the canvass. “I will stop sleeping when we get a ‘Yes.’”

Talk like this doesn’t thrill O’Connor’s mom, Celia, who wants to see Katherine at Harvard University in a few years. Katherine’s stepfather went to Harvard, and their sister to Columbia University. The family is big into Ivy League Schools.

Celia describes herself as supportive of Katherine both in terms of gender and activism.

“I’m very proud of Katherine for all the work they’ve been doing,” Celia says. “I think they’ve done an amazing job with the campaign.” 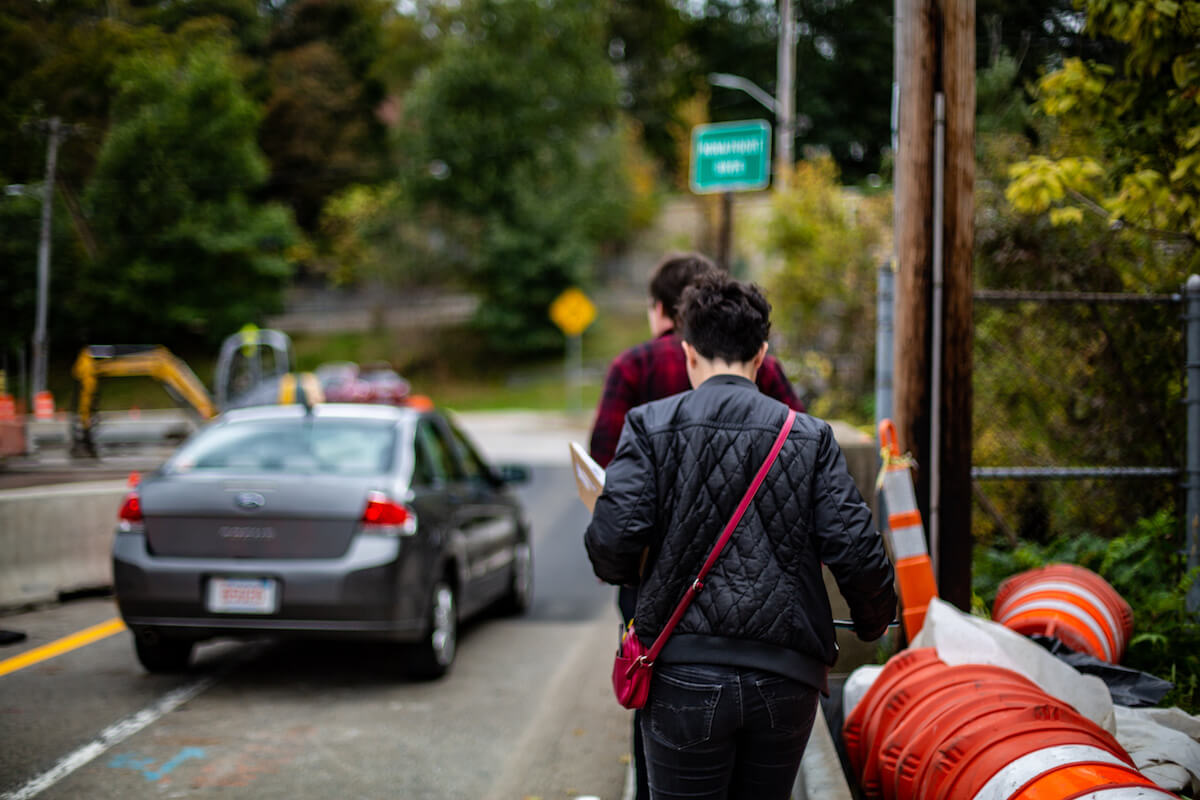 Celia volunteered at a campaign event over the weekend for the first time. It wasn’t that she didn’t want to go earlier, she says. English is her second language (Portuguese her first), and she worries people won’t understand her.

But Katherine wants Celia more involved. There’s a noticeable tension between the two when it comes Celia’s involvement on trans rights and her willingness to refer to Katherine as non-binary.

Celia still defaults to “she/her” pronouns for Katherine, two-and-half years after Katherine started using “they/them.” Katherine points this out and rattles off a list of books, websites, and videos they gave Celia to help her grasp gender beyond the binary.

“I strongly feel that I have provided a lot of resources and open myself up to questions, and there is not very much of an attempt going on,” Katherine says, sitting next to Celia at coffee shop. “One of my friends uses they/them pronouns and sleeps over at our house every weekend, and my mom will get their pronouns totally right but not mine.”

It’s different when it’s your own kid, Celia contends. She will always see Katherine the way she always has. Maybe, Celia suggests, the she/her pronouns will be okay at home, while Katherine can enjoy being they/them out in the world.

“When you’re talking about me, imagine that I have an ant on my shoulder, I guess,” Katherine tells Celia. “So, ‘They went to the park,’ myself and the ant.”

Celia makes an obvious and pained effort to use “they” pronouns for Katherine for the rest of the interview. 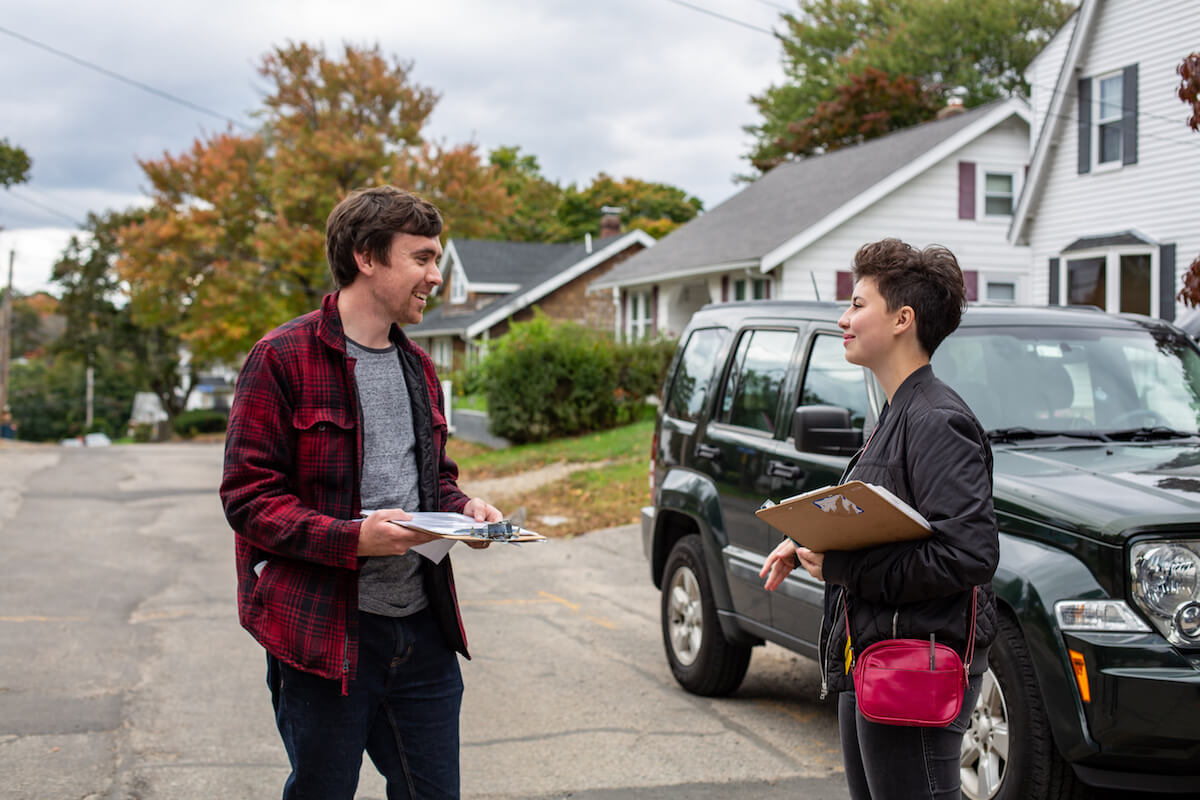 “Someone wrote in one of the stalls, ‘Why are you peeing in the Juul Room?’” O’Connor says.

It’s stories like these that O’Connor recalls for voters who say they will vote to repeal trans protections in the state. In Braintree, a Republican voter tells them they will vote no because they want to protect survivors of sexual violence.

“Because then you get then get this evil child molester who decides to dress like a woman and go in and attack kids,” the woman tells O’Connor.

“Do you know a trans person?” O’Connor asks.

No, is the answer.

By the time the woman shuts the door, she’s isn’t so sure about voting “no” anymore. 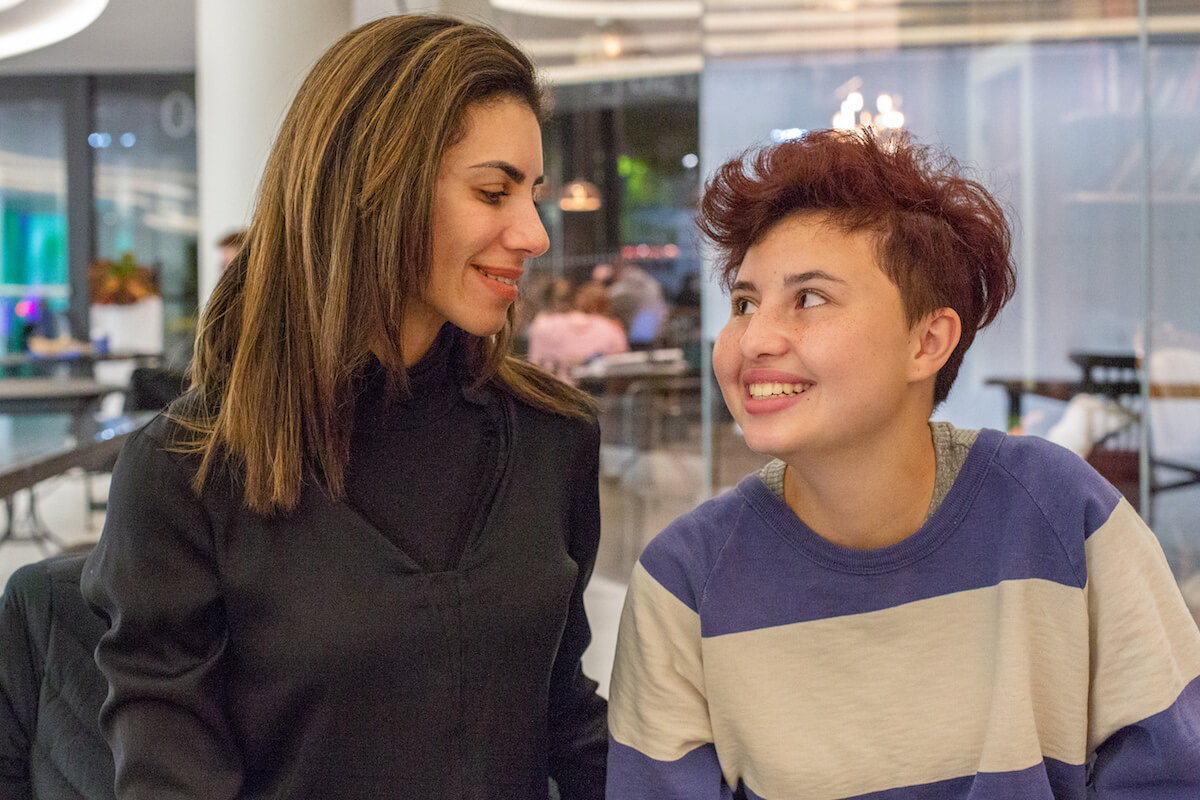 “I think it’s so much easier to make decisions about things that don’t affect you without being directly tied, if that makes sense,” O’Connor says, consulting a clipboard to find the next house on their list. “Seeing and visualizing a trans person in front of them could be what pushes them to vote yes.”

From here until November 6, O’Connor is happy to be that person over and over. On election day, they will start work at 4 am, hanging door signs, getting out the vote. If everything goes right, O’Connor can return to homework, family and normal life on November 7.

“Hopefully, this will not be on the ballot again or anything like this,” they say.

And if it is, maybe by that time, O’Connor will be old enough to vote.