Stefonknee Wolscht doesn’t live in Anchorage. She’s never met the Alaska Family Council or its president, Jim Minnery. But in November, she woke up to find herself thrown into one of the nation’s most critical fights over trans bathroom use.

Alaska Family Council, the conservative group pushing a recently voted down anti-trans ballot measure, posted a meme on Facebook attacking Wolscht. A diptych juxtaposed an image of Wolschtwho is transgenderwearing a big pink bow in her hair with a cherubic stock photo of a little girl in pigtails.

“Should this actual 54-year-old biological male who ‘self identifies’ as a six-year-old girl be allowed to undress in front of this actual six-year old, biological girl?” the caption asked. “Moreover, should the government condone it?”

Liked more than 100 times, the meme alleges that since transitioning, Wolscht has chosen to live as a young girl. 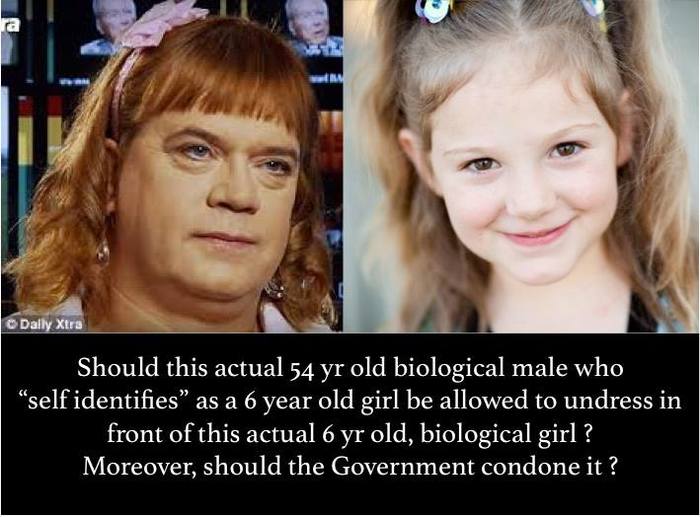 The right-wing organization posted the picture as a warning to residents about the dangers of Anchorage’s 2015 nondiscrimination ordinance, which permitted trans people equal access in all public accommodations, including bathrooms. Alaska Family Council sought to repeal those protections through spearheading a voter referendum known as Proposition 1.

If passed, the measure would have forced trans people to use the public restroom corresponding to the gender listed on their original birth certificate. Thus, someone like Wolscht would have to use the men’s bathroom when visiting Anchorage.

Despite the fact that Prop. 1 would eventually be rejected by Anchorage voters, the group’s followers immediately attacked Wolscht after the November post went live. Calling Wolscht “sick” and “insane,” commenters claimed she should be locked “in an institution.” “Shooting him [sic] would not be a crime,” others said.

“I think he’ll get the message when he gets beat a few times,” one poster concluded.

Wolscht is sadly used to this. Since discussing her gender identity in a 2015 interview with the LGBTQ news website Daily Xtra, the same photo of Wolscht was plastered across outlets like The Daily Mail, Evening Standard, The Independent, New York Daily News, and The Sun. The website BizPac Review likened her to the trans community’s Rachel Dolezal.

“How far will society accept this trans craze?” the conservative news site asked. “There’s been transgender, transracial, and even transdisability [sic] and now, it seems, there is transage.”

The media attention has led to “hundreds” of death threats, Wolscht tells INTO over the phone.

“People tell me that I should kill myself or that they’re going to kill me,” she says in an hour-long conversation. “I don’t know who they are or where they’re from. When I do check their profile, usually they have one or two followers. They just seem to come out of nowhere, perpetuate the BS, and then disappear again.”

Although news coverage claimed Wolscht abandoned her wife and seven children to “live as a six-year-old girl,” the reason Wolscht left is that her now ex-wife asked her to.

Over a decade ago, Wolscht’s partner presented her with an ultimatum. “Stop being trans or leave,” she said after 23 years of marriage.

Although Wolscht came out to her partner two years before their wedding, actually transitioning was a different matter. Priests from the local Catholic church suggested Wolscht was “possessed” by Satan for wanting to live her truth.

Wolscht thought the divorce would be a chance to start over. She had a fantasy of opening a bar and working to support her children as her fabulous new self.

The truth, however, was the same reality that faces many transgender women after they come out to their families and communities: She wound up homeless. Wolscht spent the next few years in and out of the hospital following numerous attempts at ending her life. Her children remain estranged.

That’s when Wolscht stumbled upon a practice known as “play therapy.”

Generally used on children between the ages of three and 12, the practice involves allowing adolescents to convey their emotions through play. The idea is that by allowing for freedom of expression within a contained environment, individuals can better access deeply repressed feelings.

Wolscht says that exercises like coloring and playing with dolls allowed her to heal after the extreme trauma she experienced. When she feels a major anxiety attack coming on, Wolscht cedes all decision-making to a couple appointed to act as her “parents.”

“They get to decide what I’m going to eat and how I’m going to spend my daylike if I’m going to be puzzling, playing with dolls, or watching cartoons,” she says. “They literally make all my choices for me. The only rules they make is they say we would like you to not do anything for the next 24 hoursjust play.”

Commenters on the Alaska Family Council post likened her to a pedophile, claiming she shouldn’t be allowed around children, but Wolscht asserts play therapy isn’t a fetish. She says it helps her “escape into a world that [she] never had as a child.”

“If you’re discriminated against, you have to find a way to cope,” Wolscht claims. “That’s basically what play therapy does for me.”

Play therapy also allowed Wolscht to lead a more stable life, which is why she sat down for the Daily Xtra interview nearly three years ago. She wanted to help others experiencing suicidal ideation. When trauma survivors reach out to her for support, Wolscht tells them to build a fort with chairs and a blanket and then hug a teddy bear until they’re able to fall asleep.

After being picked up by trans-exclusive radical feminist (TERF) blogs like GenderTrender, that interview has been distorted into something Wolscht never intended it to be.

Wolscht does, in fact, live her life as an adult, plowing snow in the winter to earn a living. Sometimes she even visits schools in the area to further acceptance of transgender people. Her message has been universally embraced, she says. When people are able to hear Wolscht’s story from her own lips, it breaks down the widespread misconceptions about how she lives her life.

“I speak at a lot of universities and I speak to high school students, and I never get the reaction that I get on the internet,” she says. “The reaction from teachers and professors and students is always positive. They’re disappointed in society.”

When asked by INTO why Alaska Family Council singled her out, she claims the group needed a scapegoat, someone who would “instill fear.” This was a common tactic throughout the Prop. 1 campaign. “Yes on 1,” which was spearheaded by the right-wing organization, released a series of videos branding trans people as dangerous predators waiting in the shadows to prey on women and children in public facilities.

In one TV spot released by “Yes on 1,” a woman named Kate recalled an incident in which she shared a locker room with a trans woman (referred to as a “biological male”) at a public pool. She said staff members failed to intervene.

Another video alleged that a “man claiming to be a woman” attempted to gain access to a local homeless shelter “to sleep and shower with the women.”

As INTO pointed out, both videos were based on false premises. “Kate” is actually Kate Ives, a Minnesota wife and mother who attempted to push an anti-trans bathroom bill in her own state. Meanwhile, the Alaska Family Council didn’t ask Downtown Hope Center before featuring the shelter in the video.

Prop. 1 was defeated earlier this month by a six-point margin, the first anti-trans ballot measure to be squashed by a public vote. But by sharing her story, Wolscht hopes to show the campaign for what it was: just another lie.

“By exposing the truth, it takes all the wind out of their sails,” she says. “They’re going after somebody who never hurt anyone.”