The images from the caravan were shocking; a small girl huddled in her mother’s arms, surrounded by Mexican riot police, and a man shielding an infant from tear gas. This disturbing scene — which took place on the international bridge between Mexico and Guatemala on October 19 — went viral, and back in El Salvador, Loly Mendez watched as the photos streamed through her Facebook feed.

With this repressive action, the Mexican government hoped to deter the thousands of migrants who had traveled together from Honduras, El Salvador, and Guatemala from crossing its borders, but it had the opposite effect for Mendez, a 26-year-old trans woman from El Salvador.

“This is my chance, to escape El Salvador and escape the violence against us,” Mendez told INTO. She packed quickly, throwing “two pairs of pants, two shirts, 295 dollars, and a dream” in her backpack, and took off the next day. Mendez crossed the Suchiate River that divides Mexico and Guatemala on a shoddy boat made with inflated inner tubes, and met up with the caravan in Chiapas, Mexico. For the past two weeks since joining the caravan, she has slowly been making her way towards the United States, relying on the generous donations of food and water from Mexican people along the way. 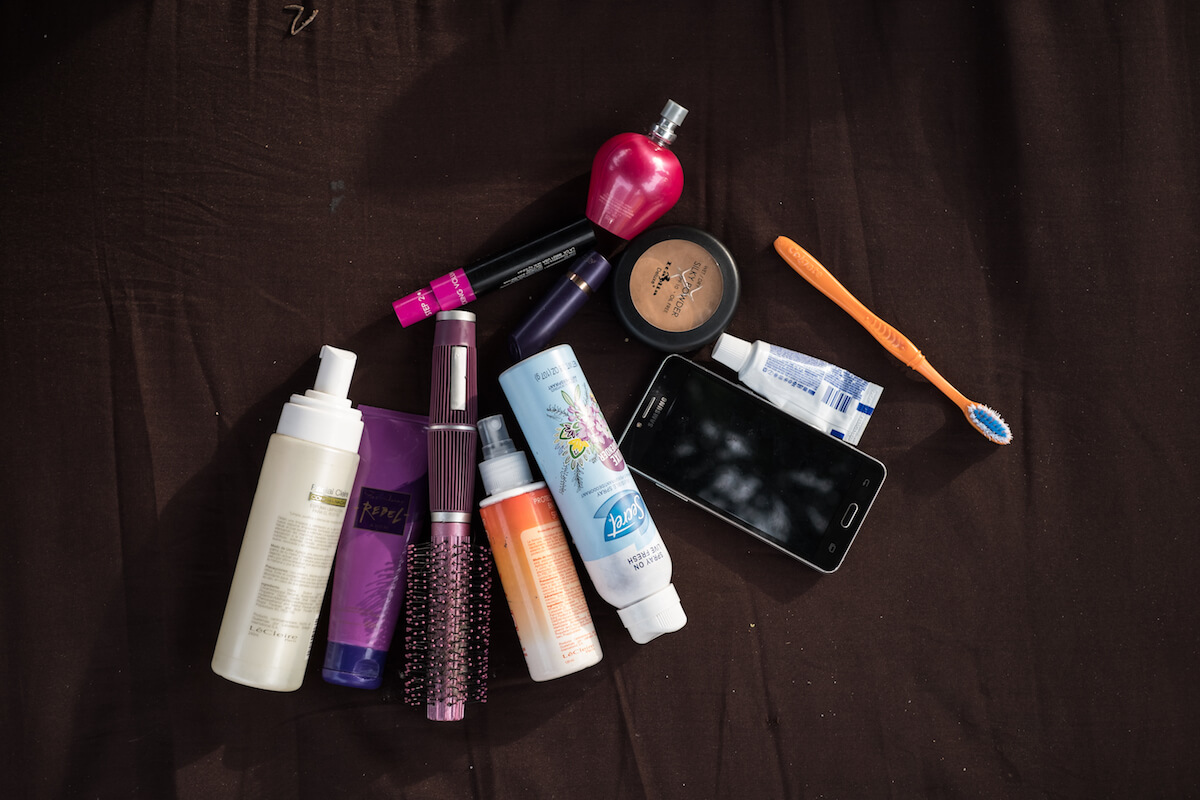 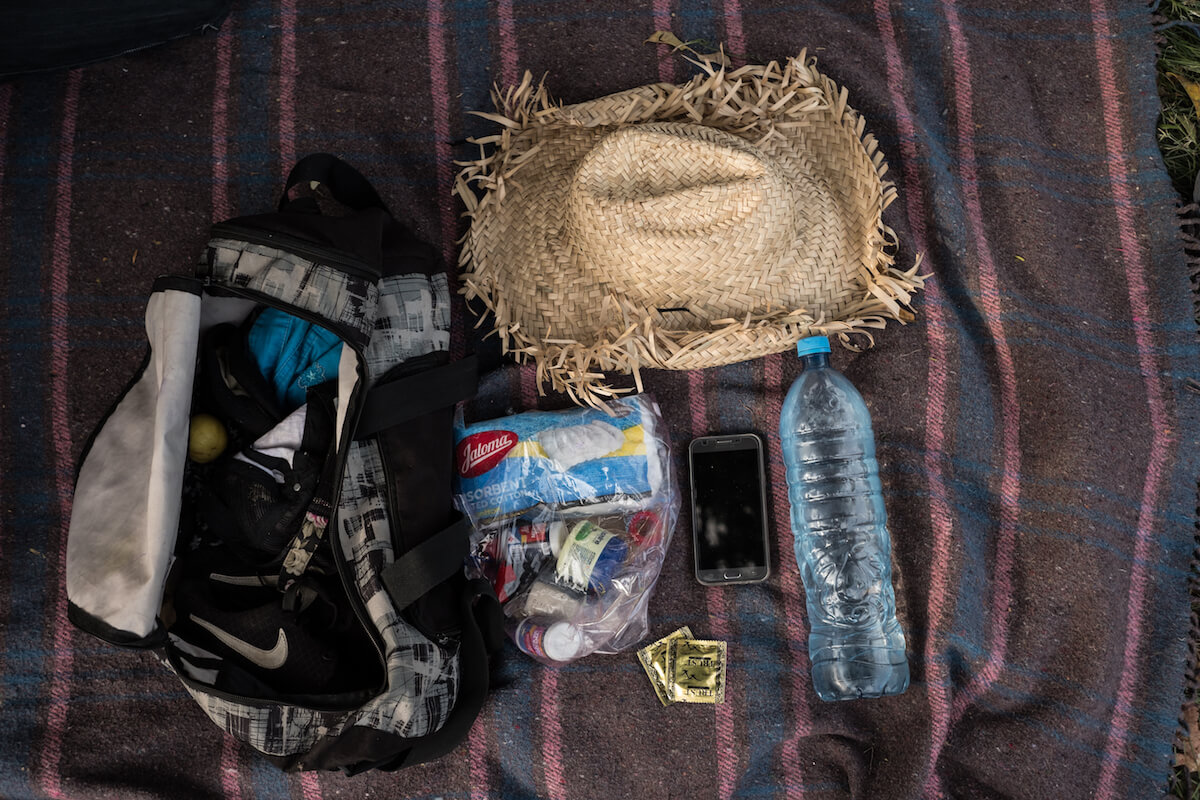 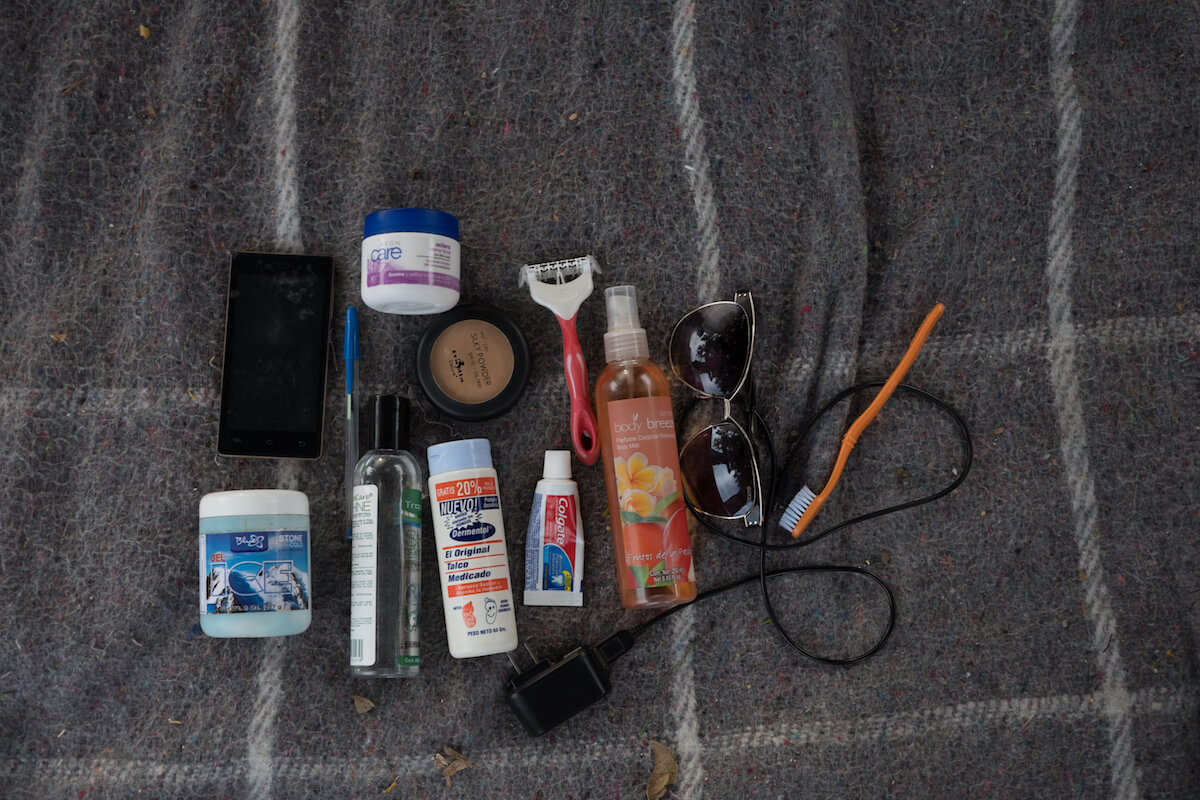 Over the past six years, El Salvador has faced skyrocketing levels of violence, which has taken a bloody toll on the civilian population and has been especially devastating for the LGBTQ community. In a March 2017 report for the Interamerican Human Rights Commission, the Salvadoran organization COMCAVIS Trans said the root causes of the violence were “a concentration of wealth, a high index of migration, the inability of the state to meet the basic needs of their citizens, failed peace agreements [following the country’s civil war],” combined with “disinformation, prejudice and repeated arguments of exclusion of all that is not considered normal.” While there are no precise statistics, local Salvadoran organizations believe that at least 145 LGBTQ people have been killed in the past three years within the country.

Mendez had already started her transition, but realized it could put her life further at risk when a close friend was killed in her hometown of San Antonio. “They threw her off a bridge,” she said, holding back tears. “But first, they strangled her. She was trans. They strangled her with a rope. She died.” Mendez had planned to have breast augmentation surgery, but then received threats from men in the town: “They said that if they saw me with a big chest, they’d cut them off.”

Having already suffered from a machete attack while working as a vendor at a sports stadium, Mendez knew that threats like this were to be taken seriously. She now travels with a letter from a former teacher that documents the abuse she has endured and hopes to use it to apply for asylum in the United States.

The U.S. asylum application process is incredibly difficult to navigate from within one’s home country, which leads the majority of people to travel to the United States and turn themselves in at an official border crossing. Their cases are then evaluated by U.S. Citizenship and Immigration Services, where officers evaluate whether there is enough evidence to show that they will be tortured or persecuted in their own country.

If what’s called “credible fear” is established, an asylum seeker is often released to a family member, usually with an electronic GPS ankle monitor, and is then expected to attend a series of court hearings which can span over a couple of months or even years. Ninety-three percent of migrants who traveled on a caravan earlier this year were allowed into the United States based on credible fear interviews, as reported by BuzzFeed.

President Trump has used this mass exodus of migrants as a rallying point during the midterm elections. In an October 29 tweet, Trump called the caravan “an invasion of our country,” saying that no one in the caravan would be admitted into the United States at the border. In multiple follow-up tweets over the next couple of days, Trump referred to the border as “sacred” and repeatedly claimed that the caravan is made up of violent thugs and gang members.

Trump also deployed an extra 5,200 troops to the border, and they are expected to face the fewer than 3,500 people in the caravan — which numbered over 7,000 people at its peak but is dwindling in numbers as it grows closer to the U.S. border.

Misinformation about the caravan has already caused violence in the U.S., too. The shooter who killed 11 Jewish worshippers at The Tree of Life Synagogue in Pittsburgh last Saturday had spewed racist rhetoric against the migrant caravan, echoing Trump’s anti-immigration rhetoric and claiming the caravan was a Jewish conspiracy on the online forum Gab.

The Salvadoran organization COMCAVIS Trans published a flyer on their Facebook page reaffirming people’s right to migrate, while recommending that LGBTQ people not attempt to join the caravans due to militarization at the U.S. border and the likelihood of being detained.

However, this did not deter Mendez nor her friend Danny Ruiz, a 25-year-old cis gay Salvadoran man who she is also traveling with. They walk and hitch rides, advancing an average of 10 to 20 miles a day, getting an early start to avoid the blazing sun in the 90-degree weather that broils the Mexican states of Chiapas and Oaxaca.

“They laugh at us for being who we are; they shout things at us. They don’t make room for us in the trucks, so we have to walk more,” Ruiz told INTO. He says that people have screamed “maricones,” (“faggots”) at them, and have thrown bottles. This doesn’t deter him from proudly sporting a rainbow flag of sorts, crafted from a pair of swim trunks he’s hung from a stick. 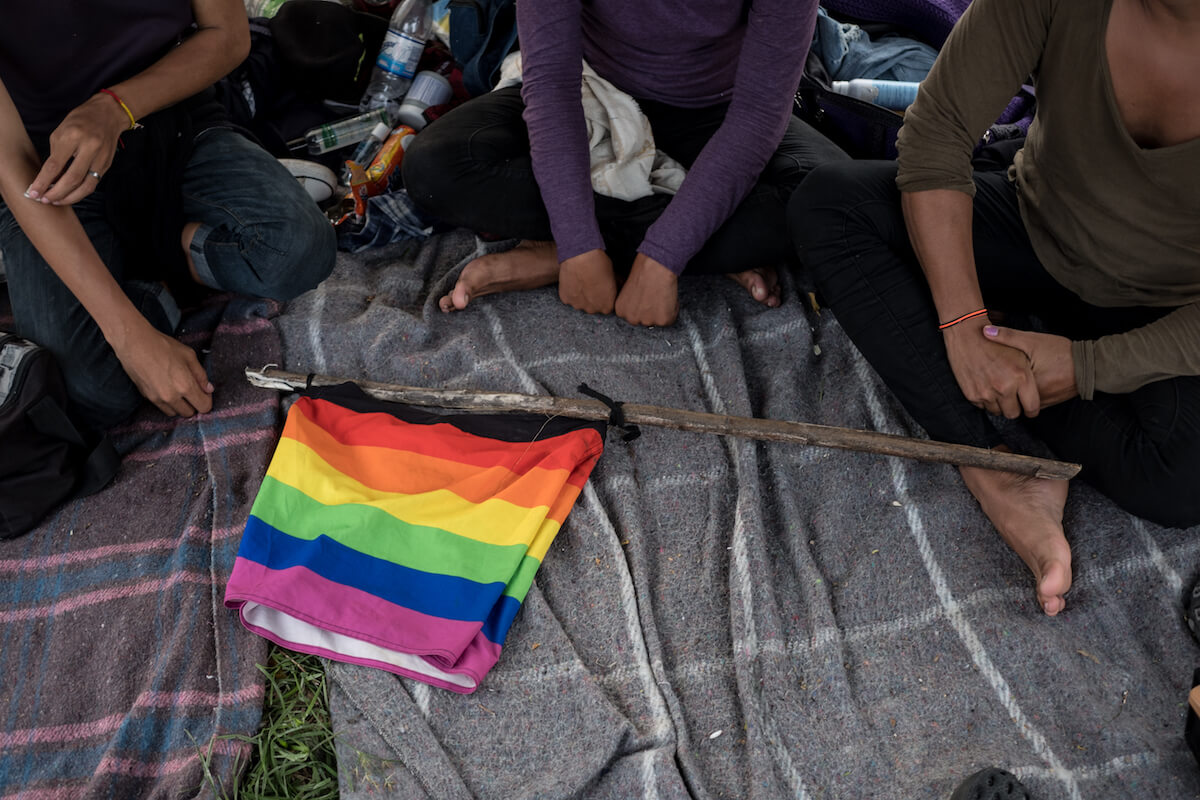 Tatiana Merino, another trans woman from San Luis Talpa, El Salvador, buddied up with fellow trans women from El Salvador and Honduras and has had a more positive experience on the caravan. She fled El Salvador four years ago when the local members of the MS-13 gang preyed on her vulnerability and put her to work for them. “They wanted me to sell drugs, pick up extortion payments, to bring drugs to jails,” Merino said. Her family was poor, but they knew how to survive. It was the violence and gang threats that made life unbearable. That’s what led her to head north.

Merino spent four years in Tapachula, Mexico before she joined the caravan, making ends meet by preparing tortillas and cleaning houses. She worried that if she applied for asylum in Mexico, she would be deported back to El Salvador and possibly killed. Recently, three trans women she knew were gunned town back in her hometown.

The Mexican government does not allow for free passage of migrants, especially if they hail from Central America. Due to recent pressure from the United States government, Mexico bolstered security on its southern border with Guatemala and Belize as part of the “Southern Border Program,” an increased border security measure. Since implementing this program in 2014, Mexico has actually deported more Central American migrants than the United States. 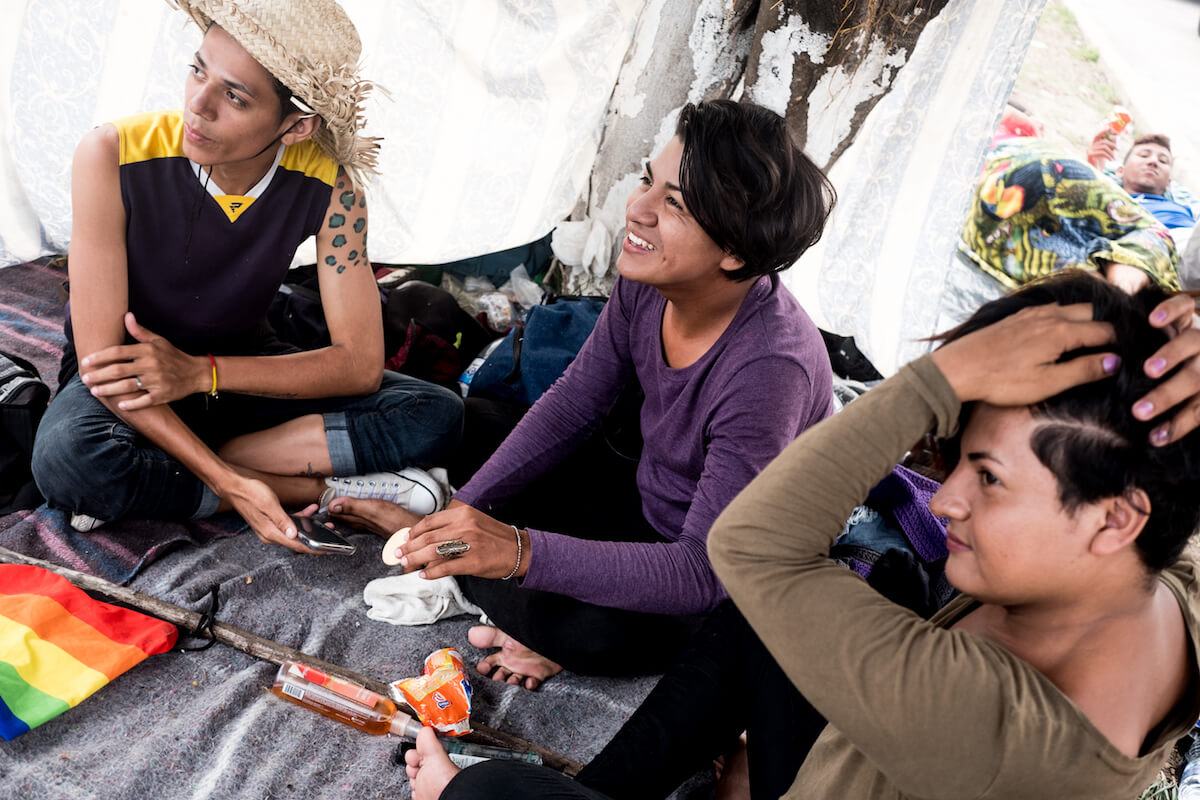 This increased enforcement forces migrants to take circuitous routes in which they are subject to robbery, extortion, kidnapping, rape, and murders. When Mendez saw the caravan enter Mexico on the news, she seized the opportunity to meet up with them in Tapachula, which is the first city they crossed.

If Mendez, Merino, and Ruiz turn themselves in at a port of entry at the United States and try to apply for asylum, they may be sent to immigrant detention while they wait for their cases to be heard. This presents its own risks. Roxsana Hernandez, a 33-year-old transgender asylum seeker from Honduras, traveled across Mexico with a caravan and died while in ICE custody in New Mexico on May 25. She was HIV positive and did not receive proper medical attention while in detention, despite being housed in a special transgender unit at the Cibola County Correctional Facility.

Ruiz says he’ll settle for Tijuana, Mexico — which he imagines is safer for gay people than El Salvador — but Mendez and Merino still harbor dreams of living in the United States. Mendez and Ruiz both hope to work at hair salons, and Merino hopes to meet up with a friend in Maryland and do whatever she can to get by.

“[In El Salvador] we don’t have people defending us. They treat us like we’re monsters,” says Mendez. “The U.S. isn’t perfect, but it’s better than what we have. It’s a free country — free from the persecution that we face.”