The worst comments have been directed at six-year-old Olivia.

She beams into the camera. “I need your help to vote Yes on 3!” she says, holding up three fingers.

Olivia is a dancer and a gymnast. She likes to play tag. The best thing about being her is that she is transgender, she tells INTO.

Not everyone thinks so. In recent days, Massachusetts voters have taken to the internet to denigrate her, call her a boy and accuse her parents of abuse for supporting her transition.

She is one of many Massachusetts youth to be harassed as the Bay State prepares to vote on the first statewide transgender ballot referendum. The vote will determine if the state will uphold anti-discrimination protections in public accomodations that took effect in 2016. A “Yes” on Question 3 would uphold those protections.

Olivia is featured on the Stand Up, Speak Out “#WontBeErased” Photo Series, a project that highlights trans voices and images in the wake of new that the Trump administration is aiming to legally erase transgender identity.

“We’ve had comments that range from ‘No’s which are trolls to more specific and getting toward violent comments like, ‘You should use the right bathroom,’” Copans told INTO. “A lot of the comments on [our] ‘Yes on 3’ ad we know are coming from Massachusetts because people are saying, ‘Fuck Yes on 3’ and saying they are voting ‘No.’” 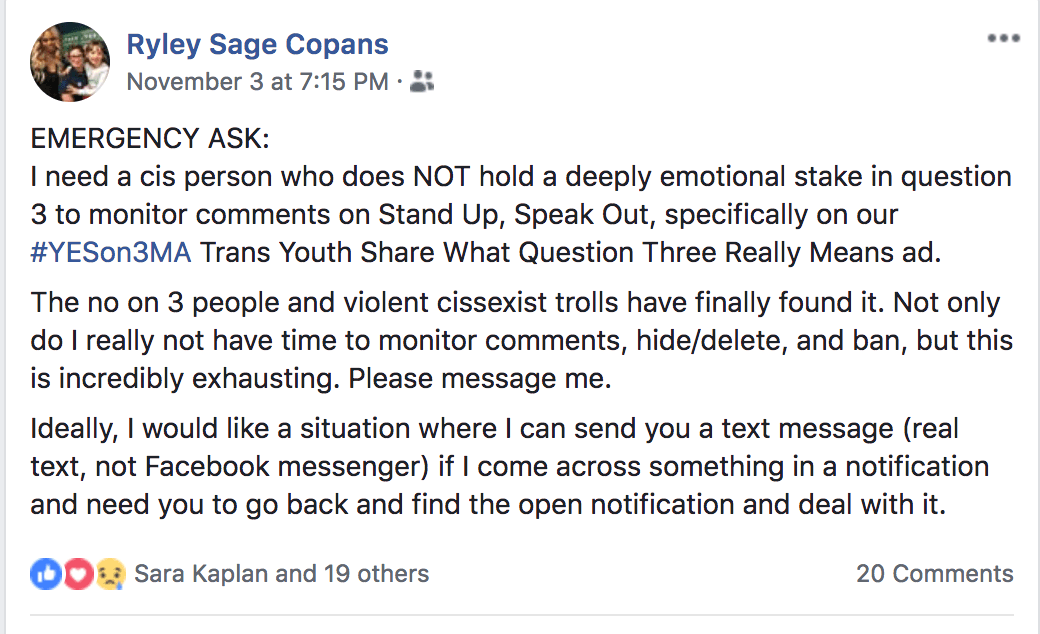 The comments directed at Olivia were so extreme that Copans had to go through four months of posts and untag her parents for fear they would be targeted in person. Other trans youth featured throughout the project have also been hit with harassing language and threats, which have since been removed.

Over the weekend, Copans wrote the parents with resources on protecting themselves online and offers to remove their social media handles from the project.

“I am not expecting this to get dangerous but I need you to be aware that these are things that we’re seeing,” Copans told them.

The threats in Massachusetts have not been limited to social media platforms.

Mateo Cox, a 23-year-old disabled transgender immigrant, said a driver tried to crash into him on I-93 near Quincy after seeing his bumper stickers for trans rights, LGBTQ pride and Paraguay. The driver flashed a white supremacy sign at Cox, he said.

Cox says there has been a difference in transphobic behavior since Question 3 hit the ballot.

“I would hear transphobic comments online, but not on such a consistent basis,” said Cox. “When you reduce transgender people to a dinnertime conversation, it erases our humanity.”

A Trump supporter screamed transphobic slurs at Cox after he protested an address by Attorney General Jeff Sessions last month, he said.

“I’m disabled and in a wheelchair,” said Cox. “I have less ability to defend myself so that makes me a lot more vulnerable. It’s also important to acknowledge the intersectionality that I have of being Jewish, of being a Latino immigrant from Paraguay. In a lot of ways, I am a poster-child for what the alt-right despises.”

High school senior Kai Livingstone said the uptick in hate speech has driven them away from a lot of comment sections online.

“The transphobia wasn’t quite as obvious before this question got on the ballot or at least I didn’t notice it as much,” said 17-year-old Livingstone. “It hurts because until your very identity is on a ballot, you can’t understand how that feels, how that affects people.” 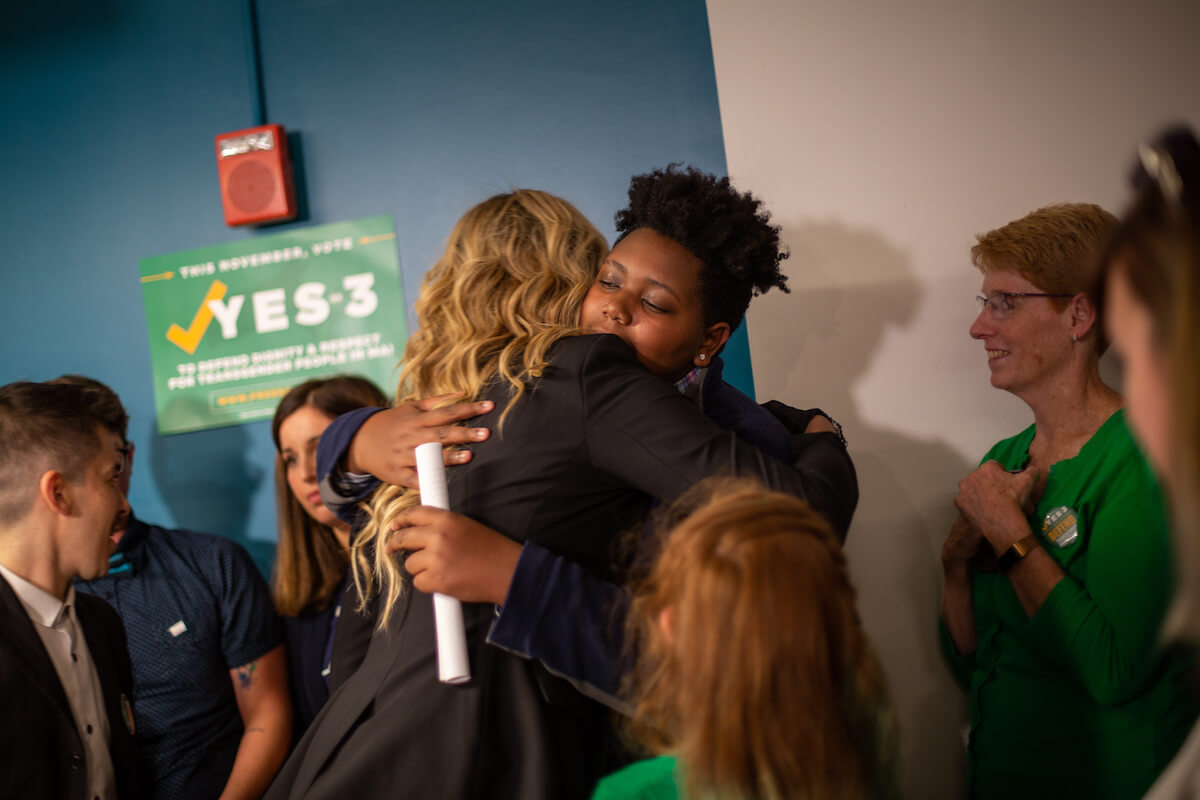 Livingstone’s own family and friends have been supportive, they said. But seeing anti-trans comments on the Freedom for All Massachusetts Facebook page, the campaign in support of keeping trans rights in Mass., has taken a toll.

For Cox, he has had to go back on anti-anxiety medication, and he is weighing returning to therapy.

Parents of trans kids also worry about the lasting implications of such a vote, even if the results are favorable.

Carmen Paulino says her transgender 14-year-old, Ashton Mota, has been surrounded by supportive peers and positive adults at school. But she says despite her pleas, the school hasn’t made space to process the fallout from Question 3 and its impact on Ashton and other students.

“To us, this is tragic, and could be very tragic after tomorrow,” said Paulino.“I don’t know how to feel that this our reality on a daily basis.”

Mota, who is Black and Latinx, has risen as a national voice on transgender rights with the upcoming vote. He is featured in a Human Rights Campaign video urging people to vote Yes on 3, and he gave the opening remarks for GLSEN’s fall conference.

Paulino says that visibility has been therapeutic for Mota and has empowered his advocacy in new ways.

“It’s not just about him, it’s all the other children and families,” she said.

Transgender adults in the state have noted that in some ways, the measure has been an opportunity for allies to step forward.

Miles Ott, a transgender man living in Northampton, says he has been more intentional about being out as trans, and his co-workers have supported him across the board.

“It has been heartening to see all the Yes on 3 signs in my neighbors’ lawns,” said Ott. “Every time I see a sign I’m reminded that there is a great deal of support for trans rights. At the same time, I’m reminded of how my basic rights are being voted on.”

Alexia Nuñez, a transgender woman, put a “Yes on 3” banner around her Facebook profile photo and received no negative responses. Her community has been mostly supportive, she said. Part of that, she thinks, is that she has passing privilege, and people often don’t read her as transgender.

“Most of the people I’ve spoken to have been overwhelmingly Yes on 3,” she said. “I’ve also had people tell me that they’re a little embarrassed that it made it onto the ballot.”