When Mr. Cosme bought himself a suitcase, his sister looked at him and said he was acting weird, like he was trying to say goodbye or something. She asked if he was going away. Mr. Cosme tried to brush it off and said something about everyone needing a good suitcase, but his sister kept pushing. He realized he had to tell her he was transgender and identified as a man; that he was not the sister she thought she had.

“I don’t feel good, I don’t like it when you call me by my name,” Mr. Cosme said in Spanish. “It makes me angry, that’s why I’m going to change it.”

He explained that he bought the suitcase because he was going to Mexico City to do the paperwork to change his legal name and gender on his birth certificate. Mr. Cosme lives in Oaxaca City with his mother, sister, and girlfriend, about a seven-hour bus trip south of Mexico City, in a state that denies transgender people’s rights. In Mexico, many transgender people must find a way to get to the city in order to change their documents and birth certificate to reflect their gender identity.

“And she asked ‘What do you want me to call you then?’ Mr. Cosme said. “And I realized, shoot! I’m going to do this legal process and I don’t know what I’m going to call myself! What should I call myself?!” 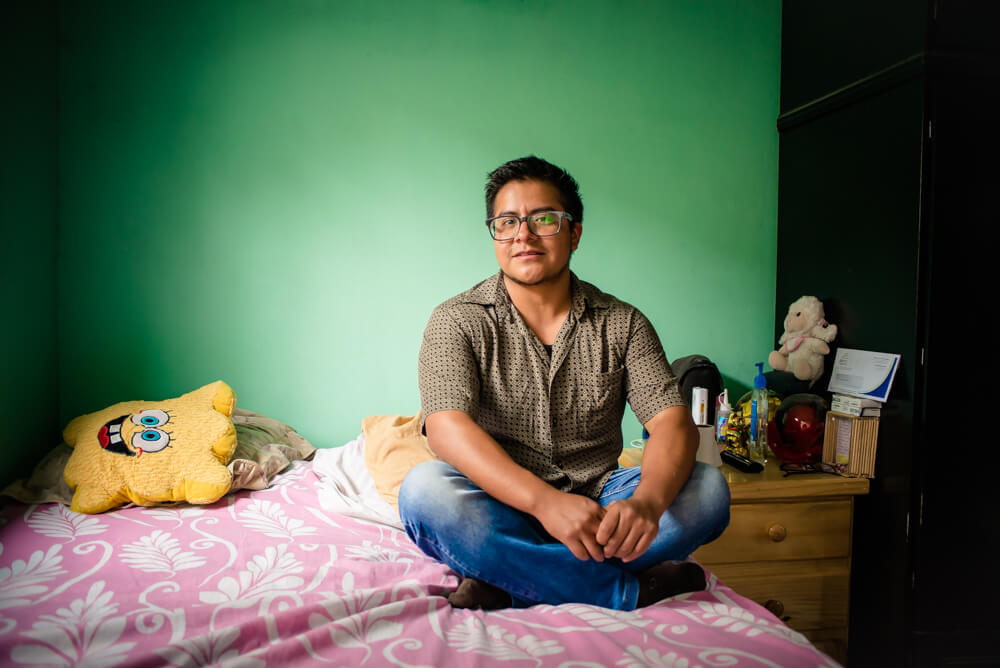 Buying a suitcase and a bus ticket in order to access basic human rights shouldn’t be necessary. But when Mexico City amended its civil code in 2014, it became cheap, accessible, and relatively easy for transgender people to change their gender and name on their birth certificates in the federal district. Several other states have followed suit, but the overwhelming majority of Mexico’s 31 states do not allow transgender people to change their gender on official documents, which has made this internal migration a feature of transgender life.

Without an ID that recognizes one’s name and gender identity, Errandonea says transgender people are much more vulnerable to discrimination. It is harder to get a job, housing, healthcare, and education. Mexico is a member of the Inter-American Court of Human Rights, it was created by the Organization of American States in 1979 and is charged with protecting human rights in the western hemisphere. Almost all Latin American countries and some Caribbean nations ratified the American Convention and are members of the court – but there are no enforcement measures or punishments for states that do not follow the court’s opinions.

The Inter-American Court went further, writing that the right to one’s gender identity should not just be guaranteed, but it should also be free and easily accessible. Why should transgender people be punished and forced to go through legal hoops, hire lawyers, and defend their integrity in front of a judge, the court asked. Mexico City simplified the process, but transgender people all over the country still have to find a way to get there.

Ismael Alejandro, a transgender man from Jalisco, made the trip in 2018. He said he went without his family’s knowledge, telling them it was a work trip.

“When I left my house to go to the airport I was really nervous,” Ismael Alejandro said in Spanish. “But when I was on my flight back from DF [Mexico City] I thought to myself ‘You did it!’ Ever since I started this process six and a half years ago, when I cut my hair for the first time, I’m so much more confident now. I even value myself more as a human being.”

Older transgender people in Mexico had to find workarounds in order to get identification that reflects who they are. Ferran, who asked us to withhold his last name for safety reasons, is 40 years old and lives in Quintana Roo, another state that denies the right to gender identity. His father has always been supportive, and Ferran says it was his dad who helped him get the right ID.

“It wasn’t possible to change one’s gender at the time,” Ferran said in Spanish. “My dad knew someone at the Registro Civil and he spoke to him and told him, ‘Listen, my son is going through this and I want to know how I can go about changing it.’ And the man told my dad that it wasn’t possible.”

In the end, the civil servant decided to help Ferran by creating a new identity for him.

“I have a double identity now,” Ferran said.

The process isn’t over when one returns from the trip to Mexico City. They have to start the process of getting their identity changed on school certificates and degrees, bank accounts, property deeds (which requires a lawyer). If they have kids, they have to go in front of a judge and get their name changed on their child’s birth certificate to avoid any future issues with inheritance. At the state level, there is little precedent and no agreement on how to deal with these issues, and many people are left pleading in front of judges who, at best, aren’t equipped to deal with these issues, and at worst are outright transphobic.

The constitution of Mexico guarantees a person’s right to human dignity and condemns any action that infringes on people’s rights and freedoms, including gender. However the National Council for Human Rights published a report in July 2018 outlining how the rights of transgender people are routinely denied.

Errandonea, the lawyer at the Inter-American Court of Human Rights, says the court’s opinion is the most advanced in the world but he thinks it could be pushed even further.

“The Court hasn’t released itself from the gender binary, it still uses the logic of man or woman,” Errandonea said. “For example, it could be advanced by recognizing a third gender.”

The Court could go even further by doing away with the gender binary all together. It could follow Costa Rica’s lead by eliminating the box denoting female or male on official identification. Instead of categorizing people in a gender box, Errandonea says, governments could guarantee the right to gender identity by recognizing people as people.

After Mr. Cosme came out to his sister he tried on different names but they didn’t feel right. Then, one night as he was falling asleep, he remembered when he was young one of his uncles recognized his gender dysphoria.

“He said to me, ‘You’re different,’” Mr. Cosme said. “He always told me, ‘Come with me, help me work, help me plant seeds.’ He pulled me out of the circle of women and helped me avoid the girl’s roles. He was a lifesaver for me.”

Mr. Cosme decided to honor his now deceased uncle and put his name on the new birth certificate: Xavier.

“I had my name, my dates to go to Mexico, my ticket, and my bag packed.” Mr. Cosme said.

The only thing left was to tell his mom. 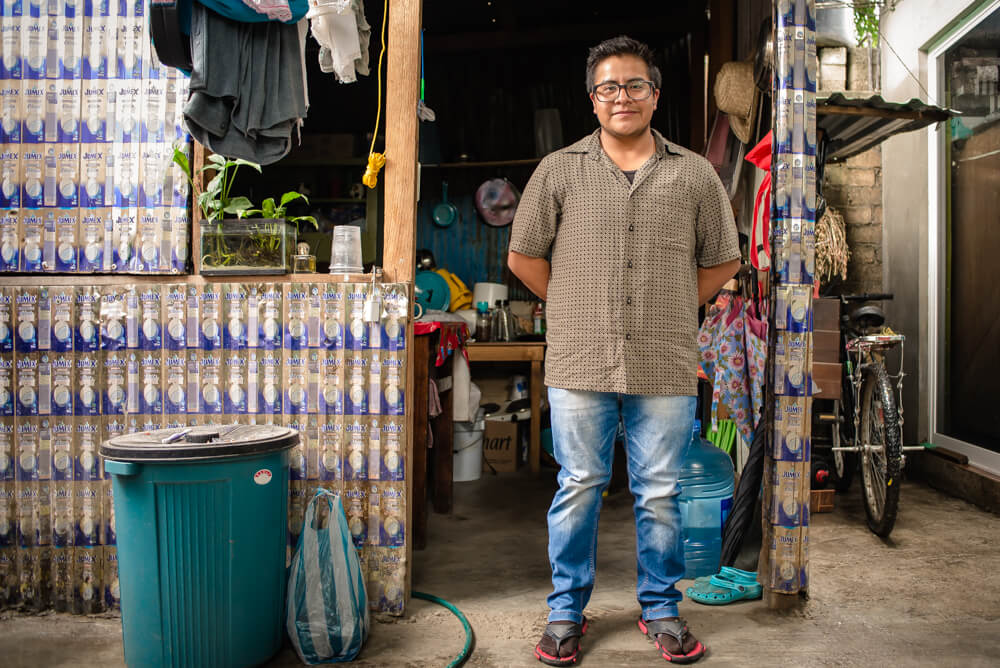 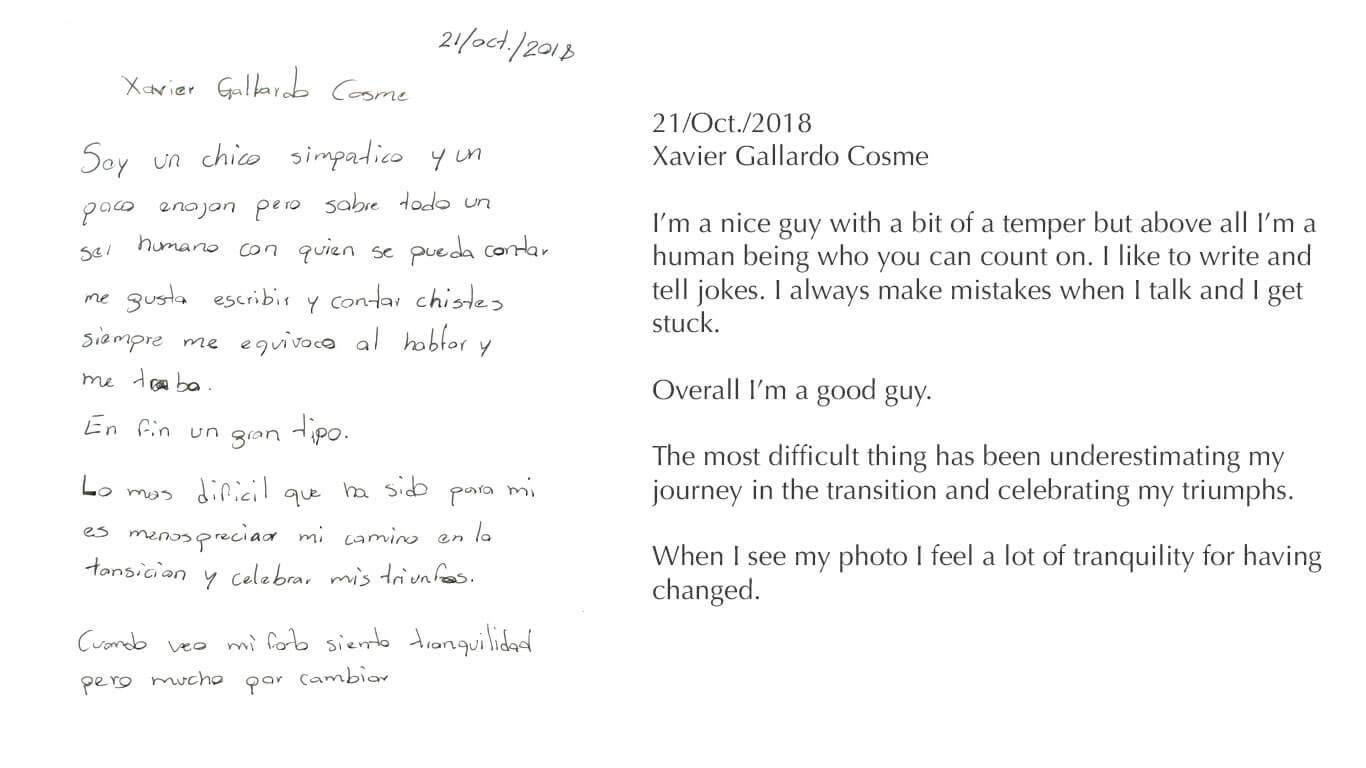 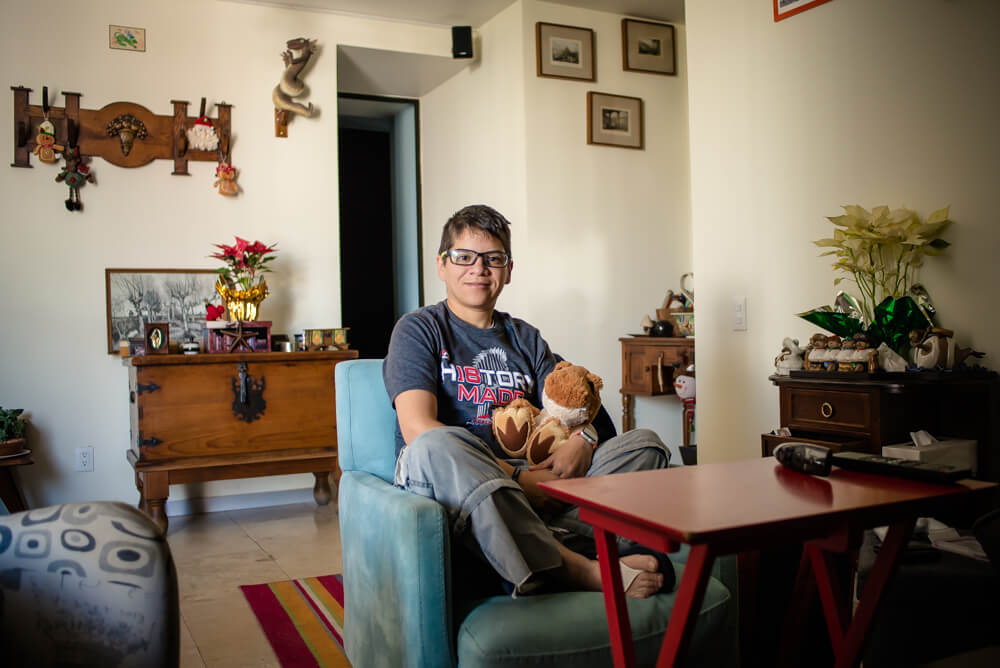 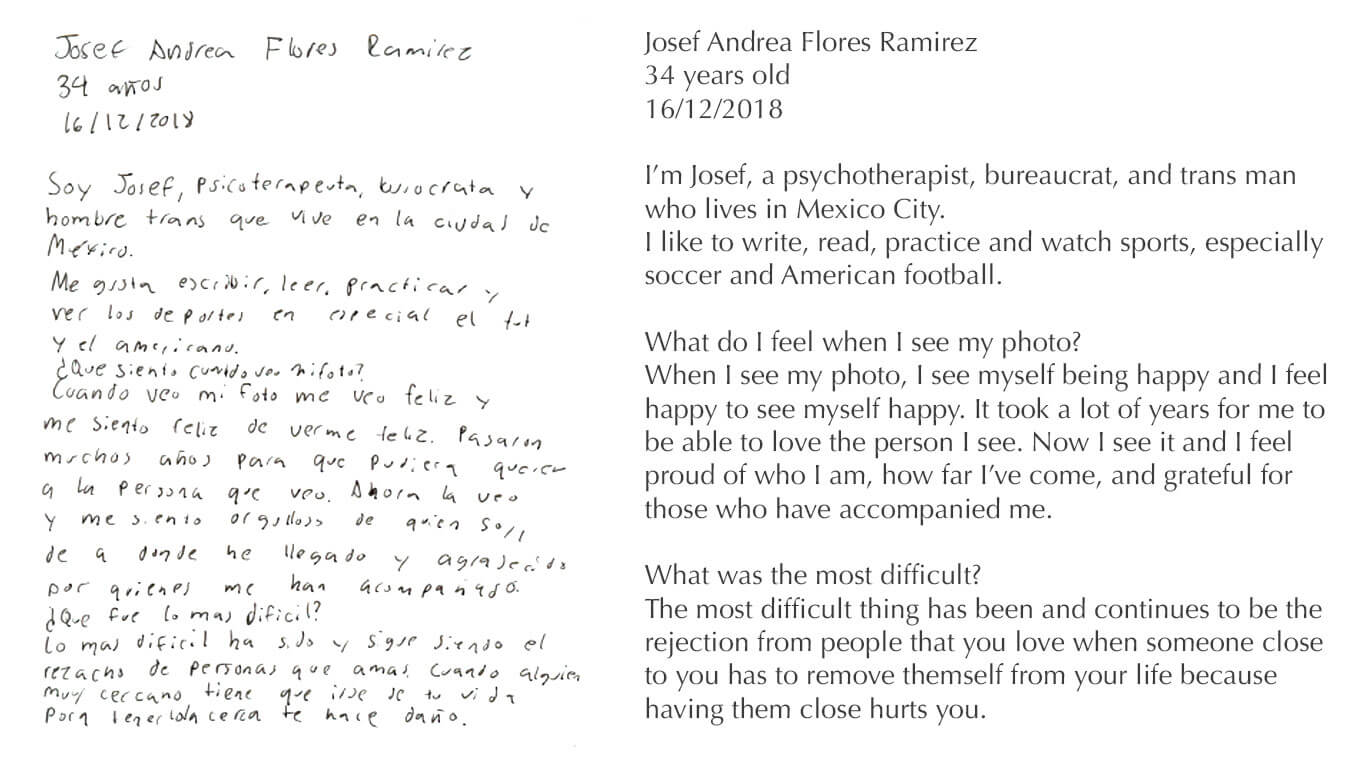 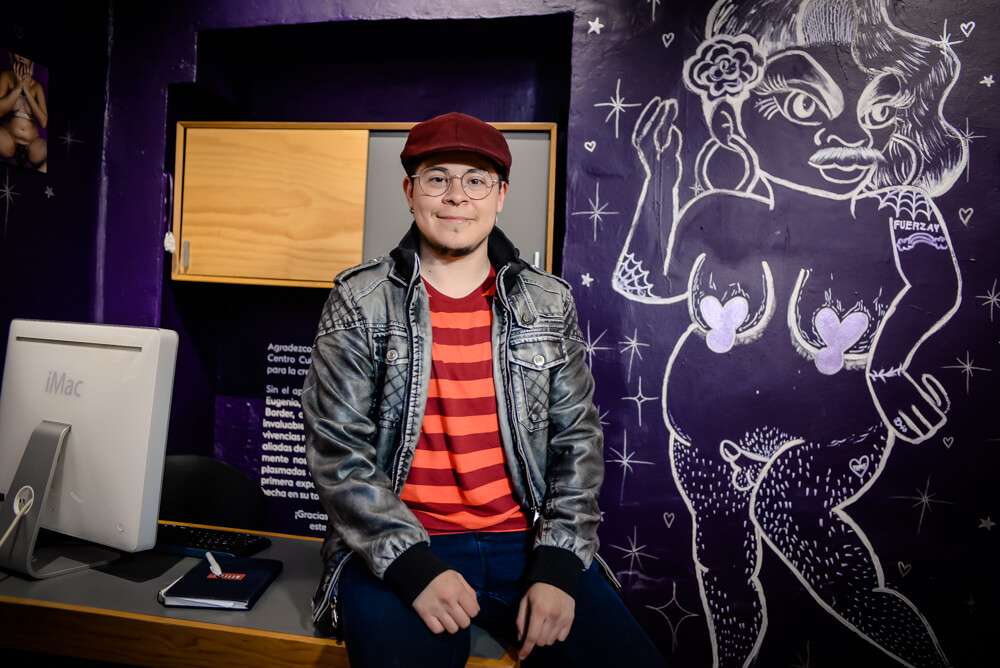 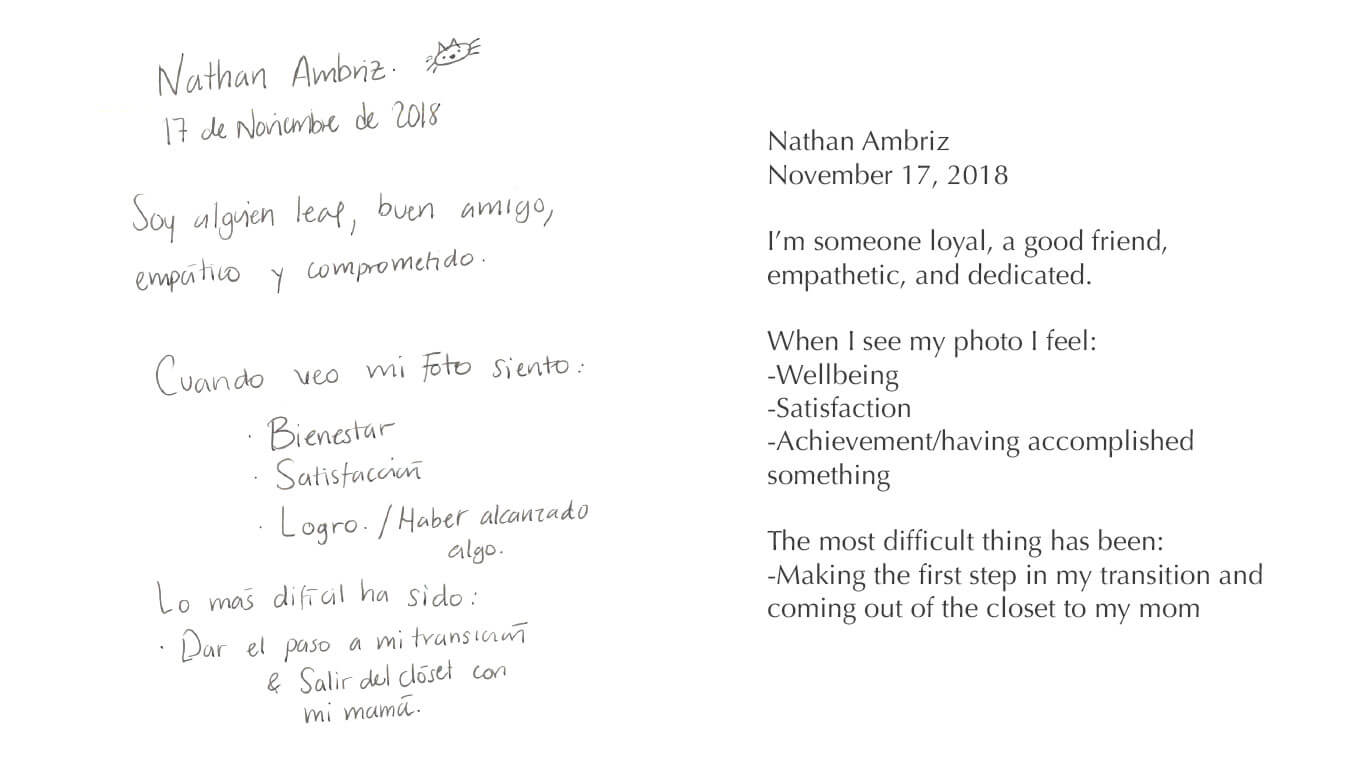 This is the sixth and final installment from our project Transmasculinidad for INTO. Go to www.transmasculinidad.com for the full gallery and updates from the more than sixty transgender and non-binary masculine-identifying people in the six Latin American countries we visited. You can also find us on Instagram or on Facebook.