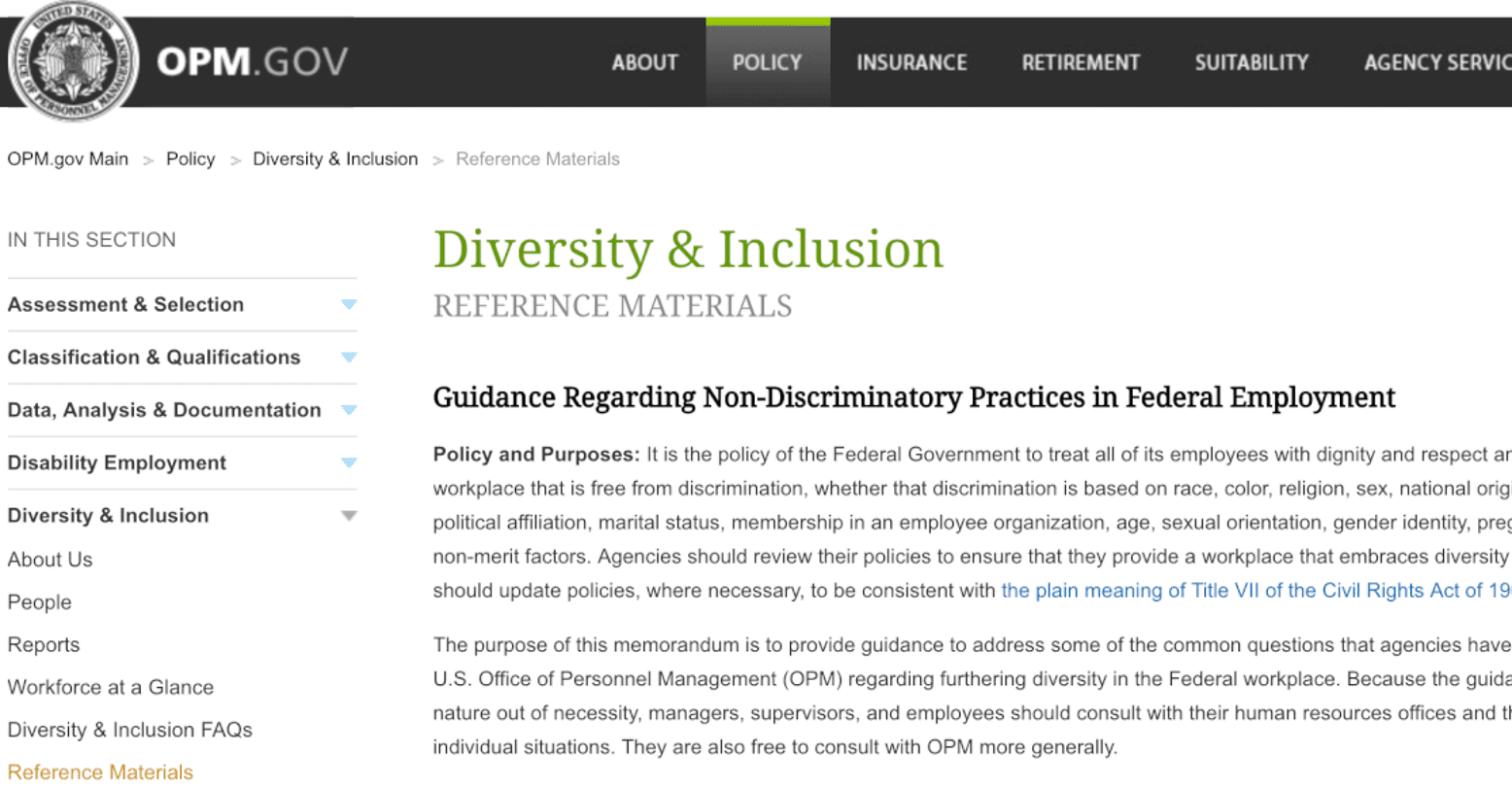 Trans people have been erased from yet another government website, as the Trump administration seeks to roll back the federal definition of gender.

As of Friday, guidelines regarding transgender employees were removed from the Office of Personnel Management (OPM), a department which manages the federal government workforce. Implemented under the Obama administration, those policies included referring to trans individuals by their correct name and pronouns and allowing them to use restrooms consistent with their gender identity.

The guidance further claimed that surgery was not required in order for transgender workers to access facilities appropriate for them.

“Under no circumstances may an agency require an employee to use facilities that are unsanitary, potentially unsafe for the employee, located at an unreasonable distance from the employee’s work station [sic], or that are inconsistent with the employee’s gender identity,” it claimed.

The guidance claimed that refusing to follow these policies is “contrary to the goal of treating all employees with dignity and respect” and suggested it could lead to disciplinary action: “[I]n some circumstances, such intentional conduct could be viewed as creating an unwelcoming work environment.”

All of that inclusive, affirming language is now gone.

But the most compelling change made to the Obama-era guidance regards gender differentiation in the workplace. For work assignments that are “appropriately differentiated by gender,” the prior policy claimed that “should treat the employee as [their stated] gender for purposes of all job assignments and duties” after they have begun the process of transitioning in the workplace.

“Transitioning employees should not be required to have undergone or to provide proof of any particular medical procedure (including proof of surgery) in order to be eligible for gender-specific assignments or duties,” it stated.

However, those provisions have been rolled back in accordance with the federal government’s determination that gender is limited to “biological sex.”

“In some workplaces, specific assignments or duties are appropriately differentiated by sex,” the OPM website now states. “In those instances for which sex is a bona fide occupation qualification, individuals should be hired for, and stationed for assignments and duties, in accordance with the individual’s biological sex, consistent with the plain meaning of Title VII of the Civil Rights Act of 1964 as articulated by the Attorney General memo of October 4, 2017.”

These directives concur with an October report from the New York Times that the Department of Health and Human Services (HHS) is currently drafting a memo that limits the government’s definition of sex to an individual’s gender as assigned at birth.

But Mara Keisling, executive director for the National Center for Trans Equality, claimed the updates to the OPM website don’t change the executive order signed by Obama in 2014 protecting LGBTQ workers in federal hiring. Keisling called the move a “cowardly attempt to spread chaos and confusion throughout the federal government.”

“All transgender workers should know this does not legalize discrimination and nobody can just fire them because of who they are,” she claimed in a statement.

“The Trump administration is resorting to misinformation and distortion in an attempt to harm countless employees of the federal government, the nation’s largest employer,” Keisling continued. “This administration is clearly doing everything in its power to undermine federal law and spread lies about the rights of transgender people.”

As advocates suggest, there remain exactly two references to gender identity being a protected class in the updated webpage regarding OPM policy.

One of those references instructs government agencies to treat “employees with dignity and respect and… provide a workplace that is free from discrimination” and the other advises hiring managers to “conduct themselves in a professional manner” while interviewing applicants for federal positions.

Both of those examples also include language forbidding discrimination on the basis of sexual orientation, which was likewise spelled out by the previous administration.

Although LGBTQ advocacy groups worried that Trump would repeal the Obama order on nondiscrimination in government agencies, that directive has remained intact. In a statement issued in January 2017, the White House said the president “continues to be respectful and supportive of LGBTQ rights, just as he was throughout the election.”

“The president is proud to have been the first ever GOP nominee to mention the LGBTQ community in his nomination acceptance speech, pledging then to protect the community from violence and oppression,” a spokesperson claimed in a statement.

Since that pledge, the Trump administration has scrubbed references to LGBTQ people from half a dozen federal websites. These include online resources for the Department of Health and Human Services (HHS), Office of Civil Rights (OCR), Office of Management and Budget (OMB), the State Department, and WomensHealth.gov.