(St. Petersburg, Russia) There were no provocative costumes, no pink feathers, no people jumping half-naked on floats through the main streets of St Petersburg this past weekend. It is still too early for that for a city where Pride is new.

Instead, over a hundred people joined the 8th annual Pride Parade in a “free-speech zone”, an area where citizens can freely gather after having informed city authorities, with signs and chanting at the Field of Mars, a park located just outside the city center, making this year’s throwing the most attended since its inception seven years ago.

And as the number of attendees rises each year, the amount of anti-LGBTQ protesters slowly declines hinting a what some are hoping to be changing times for the better in notoriously anti-LGBTQ Russia. 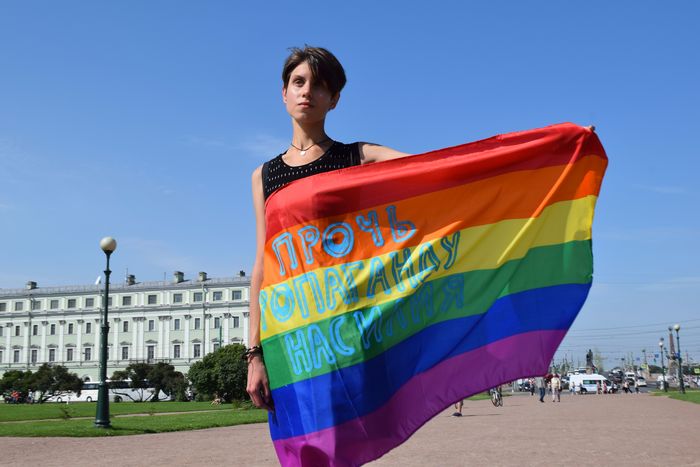 The counter event on the day of the pride parade consisted of only five people who waved the orange and black flag of St George, a widely recognized military symbol strongly associated with support to the Kremlin. The participants, all of them well past their middle age, yelled slogans in support of Putin and inveighed against the LGBTQ community from behind the human barrier created by riot police.

However, while the anti-LGBTQ protestors were low this year compared to previous Pride events, fear of retaliation on many levels continues to suppress the numbers of attendees in a city where there are certainly more than 100 LGBTQ folks living there.

“Many people are afraid to lose their job or get expelled from the university,” explains Sveta, one of the participants in the day. Or maybe worse: violence.

In the recent past, there have been frequent attacks on LGBTQ people during these events. In 2013, the pride parade was outnumbered by an organized group of religious fanatics and nationalists who violently attacked the participants throwing stones and bottles filled with urine.

“Few groups of nationalists were cooperating with each other, but they were supported by the police because not one of them was arrested, no one was even fined,” says LGBTQ activist Yury Gavrikov, organizer of this year’s parade.

Similarly this year, nine young men attempted to disrupt the event but were initially blocked by riot police. Kept at a distance, the men lingered around the park until the event was over, but once the crowd of activists dispersed they attacked them with pepper spray.

Hate crimes against LGBTQ Russians on the rise

Such episodes of violence have become common in the aftermath of LGBT events and perpetrators frequently manage to get away without consequences.

“The number of hate crimes against LGBTQ-people rose dramatically after the [gay-propaganda] law had been adopted,” says Tatiana Glushkova, a lawyer at the human rights organization Memorial, referring to a federal law originally meant to protect children from exposure to “non traditional family values”.

Yury Gavrikov has been a victim of these attacks multiple times, not only during public events, but also in his private life. 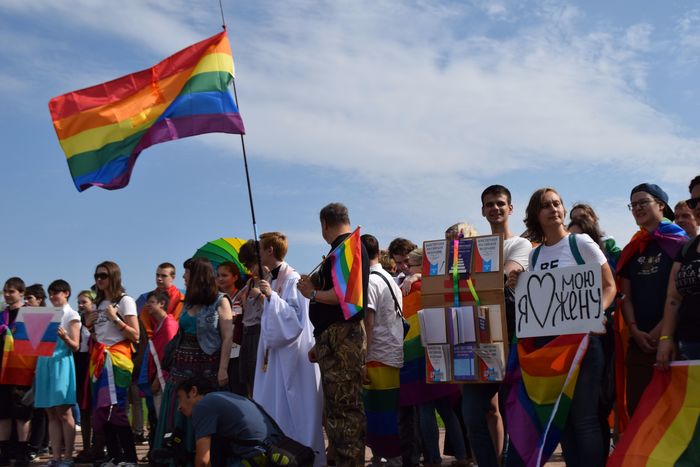 In 2010, just after the first gay pride parade in St Petersburg, Gavrikov woke up to find his pictures spread all over the walls of the multi-storey building where he lives, together with a sign warning for a “gay pride parade organizer and pedophile” living in the building.

“I think I collected about 20 or 25 of these papers glued on the walls and some more from people’s mailboxes and I went to the police with them,” says Gavrikov.

After two or three months of investigations Gavrikov was told by the police that “based on scientific research by an American scientist, 96% of gays are pedophiles, it is a just opinion based on a scientific research and they have the right to spread it.”

Hurdles that faced this year’s Pride

While this year’s Pride was a success due to the ban surprisingly not being used to cancel the festivities, officials warned organizers that it could be implemented in other ways.

“They didn’t ban this event on the basis of the gay propaganda law, but they just warned us that with [our] goals we [might] violate this law.” Gavrikov told INTO after the parade had ended. “Laws here are open for different interpretations.”

At the rally that was the focal point, topics discussed during the parade this year were equal marriage, rights of LGBTQ disabled people, discrimination in the workplace, hate crime against the LGBTQ people and those who are HIV+. 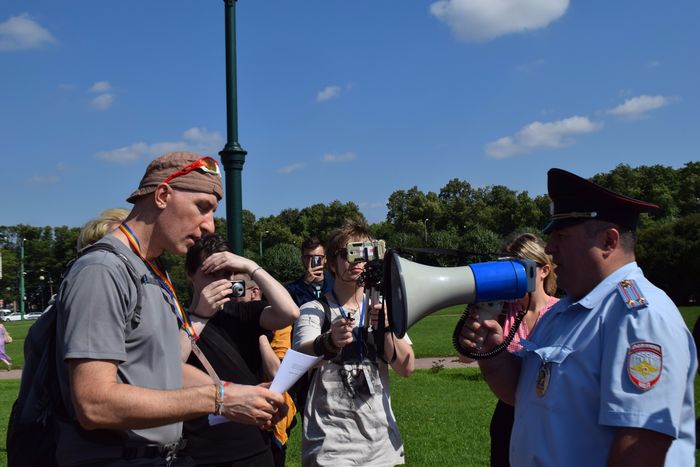 The event lasted a total of three and a half hours, the period of time that was already established by Gavrikov’s request to the city authorities. Once the fixed time was over, activists were ordered by the police to vacate the area.

Refusing to comply with the command, one of the participants, Anna Grabetskaya, was subsequently arrested. According to the Public Observation Commission of St Petersburg who checked on the woman’s conditions on the day of her release, on August 13th, for the two days of her detention the woman was not offered food nor water and was not provided with neither soap or toilet paper.

Moreover, Grabetskaya was fined for a sum of 10,500 rubles (approximately $175USD) for disobeying the authorities and violating the conditions established for the event.

In spite of the limited attendance, the persisting violence and opposition, this year’s gay pride parade marked a victory for the LGBT community. As the crowd of activists leave the park with a renewed excitement, photos of rainbow flags start appearing on Russian social media, a sign that the LGBT community still exists and is as vibrant as ever.