On Nov. 6, Massachusetts votes on Question 3, a measure that would retain civil rights protections for transgender citizens. While recent polls show support at an encouraging 73 percent, the ballot measure has provoked months of anxiety and concern for the parents of trans children.

For Vanessa Ford, that’s meant months of uneasy decisions about how to explain the vote to her seven-and-a-half year old daughter, Ellie.

Ellie told her parents she was a girl on the day of her fourth birthday. Obsessed with princesses, she confidently informed her mother, “I’m a girl in my heart and my brain.”

Vanessa told INTO she was worried at first that Ellie might change her mind. But that changed when she described her child’s behavior to a transgender friend, who responded: “It sounds like she’s insistent, consistent, and persistent. Those three things together often mean you have a transgender child.”

In the three years since Ellie came out, Vanessa and her husband, J.R., have done everything they can to learn about parenting a person that they only recently learned was their daughter. But nothing could have prepared them for having their child’s right to exist in public put to a popular vote.

Massachusetts has always enjoyed some of the broadest LGBTQ protections in the country. In 2004, it was the first state to grant the freedom to marry, and in 2016, Republican Gov. Charlie Baker signed a bill that added gender identity to the list of characteristics protected from discrimination in public accommodations.

Anti-equality groups immediately mobilized to force a referendum on the new law, placing it on the ballot as Question 3. Civil rights advocates fear that if voters rescind protections in Massachusetts, similar techniques will be used to undermine LGBTQ protections in other states.

Knowing that the outcome of the vote will dramatically affect Ellie’s quality of life as she moves through the Massachusetts school system, Vanessa and J.R. felt a particular urgency to contribute to the Yes on 3 campaign however they could. But they were careful not to dive headlong into advocacy without first considering the impact on their daughter.

“We needed to make sure Ellie was safe and grounded and had community support,” Vanessa said.

That meant giving her the space to make friends, meet kids her age, and indulge in pastimes familiar to the parents of many other seven-year-olds: trading Pokemon, inventing puns, and being a picky eater. Though the family often has NPR playing at their house, Vanessa would call out to Alexa to change the channel whenever news about Question 3 came on.

Meanwhile, without even trying, the family found themselves doing the work of making the personal political. When Ellie and a classmate wanted to have a sleepover, the classmate’s mother expressed a vague concern that being trans would negatively impact their friendship. Vanessa offered the parent some reading material about trans children. The other mom not only came around to allow the sleepovers but began speaking at public events in favor of Question 3.

At that point, Vanessa said, they felt comfortable explaining to Ellie that there was a vote coming up about transgender people and that the family could choose take an active role in the campaign.

“It’s been the first time we’ve gone to her and said, ‘Ellie, this is happening, would you like to be part of it?’” Vanessa said.

Ellie, whose attention is generally focused on sculpting clay figures and playing outside, began to dip her toe into activism. She declined to be photographed by the local newspaper but was excited to see her name in a Boston Globe story alongside other trans kids. She attended a City Council meeting about Question 3 and danced when she saw news cameras pointed at her. 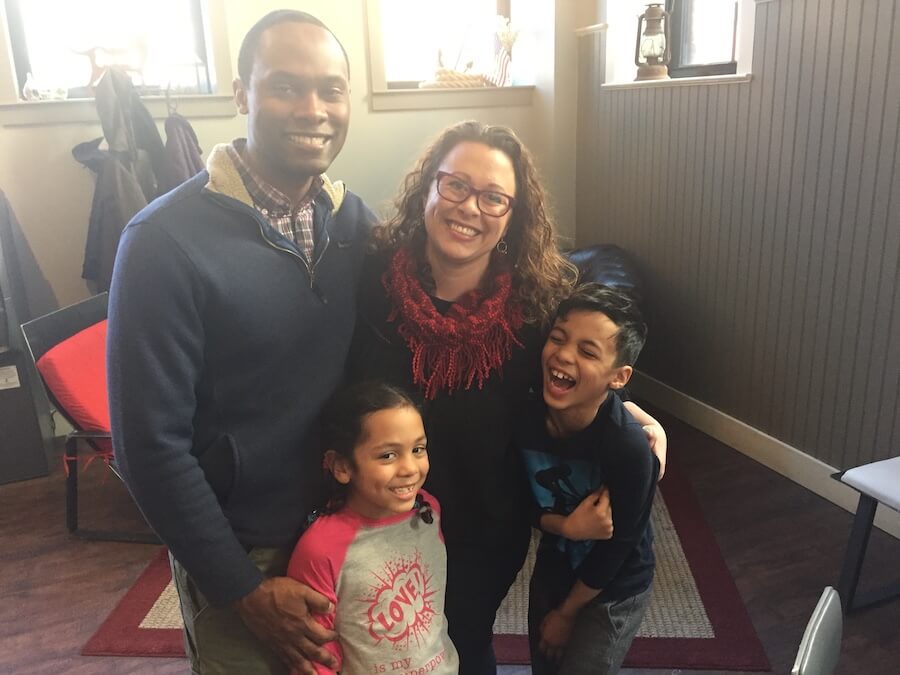 The family distributed yard signs together. She came out to her classmates. Her peers were universally accepting, particularly after the class read the book I Am Jazz, based on the childhood of trans activist Jazz Jennings.

“She’s toggling between a space of being introverted and shy, but also being fiercely proud of who she is,” Vanessa said. “Our next step as parents is not pushing her to do too much.”

They’ve also grappled with questions about how much to tell Ellie about the vote. “We haven’t told her there are people pushing ‘no,’ but she’s picked up on it,” Vanessa said. “Last week she asked me, ‘Mom, why do some people not like transgender people?’ And it took me aback, because we’d tried to fill her with positive messages … but she called our bluff.”

Ellie has expressed worry about the campaign and about anti-LGBTQ animus in general. Last year, the family was part of a delegation that met with Education Secretary Betsy DeVos about the Trump administration’s failure to protect trans youth. While DeVos was pleasant at the meeting, Ellie was taken aback afterwards when she saw a photo of the secretary standing alongside Trump.

“How do I know if people don’t like transgender people?” she asked.

According to Vanessa, her daughter wondered how someone who appeared so nice could also be so mean.

“I had to assure her that most people who are nice to you are going to continue to be nice to you, like your class and your friends,” Vanessa reflected. “But to be completely honest, as a parent it goes back to: ‘Did we do the right thing if that experience made her question who would support her?’”

Ellie turns eight in March, which means she’ll have spent close to half of her life expressing her true self. Vanessa is keeping a watchful eye on the impact that the measure might have on her daughter’s development.

“I don’t know—and we may not know—if there are any pieces of this stuck in her brain that she’s struggling with,” she said.

Vanessa added that she’s particularly concerned about what Ellie will absorb as her reading proficiency increases, and she spends more time online. Vanessa also isn’t sure what she’ll tell her daughter if voters reject Question Three.

“I don’t know if she understands that there’s an actual vote for it,” she explained. If we win, that’s easy. “But if not, I think I…”

Her voice trailed off and she took a long pause. It was the first time she was silent in an hour-long conversation.

“I don’t know—I’m not speechless often,” Vanessa said. “Ultimately, we need to let her know she’s safe, she’s loved, that we are not going to allow her to be discriminated against. But I’m not sure how you tell that to a child.”