Model, DJ, activist and all-around wonder woman Munroe Bergdorf has heard her name on the lips and fingertips of numerous people in the last week and a half. The UK-based beauty made history earlier last week when she became the first out transgender woman to be featured in a campaign with L’Oréal UK.

The makeup giant promptly dropped her after learning of social media comments she made in response to the events of Charlottesville last month. Bergdorf posted on Facebook how white people from “micro-aggressions to terrorism” must be held accountable for benefitting from systemic white supremacy and white privilege. The comments have since been deleted after being reported.

Rightly so, numerous people took to the Internet to show their support for her candid discussion of white supremacy. Bergdorf didn’t mince words or coddle her audience around the issues at hand. She also wasn’t alone in her assessment, but clearly L’Oréal disagrees. 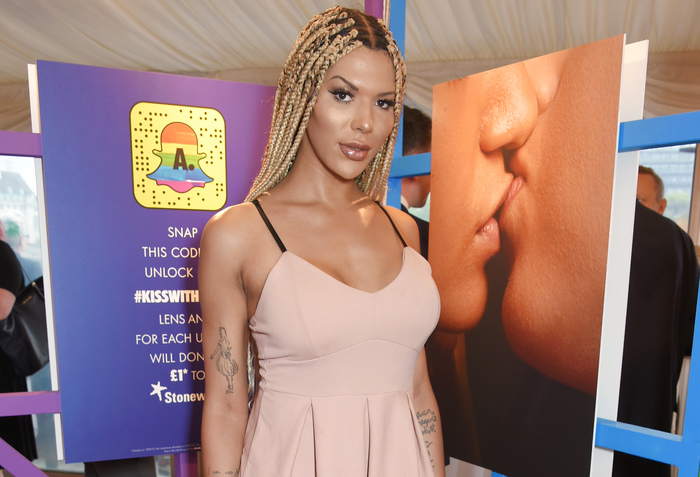 The company’s response to Bergdorf’s very raw feelings on the tragedy perfectly elucidates how white supremacy comes in many forms to attack people of color who dare speak out against it. Beyond L’Oréal’s disgusting misstep in penalizing Bergdorf for speaking the truth, there’s actually more to the story.

Her firing was in part due to a white queer man named Adam Pennington spinning a story about her comments into a massive media firestorm in order to “bring her down a massive peg.” Twitter userOtamerereported that Pennington also bragged about getting the story to the Daily Mail on his Facebook page.

This headline is part of a long media tradition of painting anti-racism activists, and particularly women as irrational anti-white furies pic.twitter.com/K5i6R9CMkQ

Bergdorf later corroborated the story on Twitter saying, “This is what REALLY went down… Sending love to everyone who can see through all of this. I won’t let this beat me.”

This is what REALLY went down… Sending love to everyone who can see through all of this. I won’t let this beat me. https://t.co/svDHsWZPKY

After being exposed in a similar way to how he exposed Bergdorf, he has deleted his social media accounts. Unfortunately, Google has left artifacts because the Internet never forgets. (By the way, he probably should take his Plenty of Fish account down too. Or at least use a wack username or pseudonym like everyone else.)

Pennington’s crusade against a transgender woman of color who dares to boldly speak her truth is just one instance of the larger, more insidious systematic white supremacy that Bergdorf has been mentioning. In fact, she stands in the footsteps of Marsha P. Johnson and Sylvia Rivera, who both sparked the onset of the LGBTQ Rights Movement and worked tirelessly for decades to elevate the most marginalized queer and trans folks. It was mostly white, capitalist cisgender men who sold out and continue to sell out the original radically inclusive mission that Johnson, Rivera and other early LGBTQ activists put forth.

It’s oversimplified to diminish Munroe’s firing from a major beauty campaign, but what has happened to her mirrors a larger awakening in the general public. People of color, especially Black folks, are growing weary of having to silence what they experience, even if it means foregoing a check. DJ Clara Amfo, another Black model on the L’Oréal campaign, bowed out due to Bergdorf’s mistreatment. Just like them, we can no longer allow companies and organizations to profit off of us without listening to us.

We shouldn’t be too surprised that L’Oréal would so quickly abandon a person of color. Just look at its history. The company’s founder, Eugène Schueller, was very pro-Nazi and his nationalist views are well-documented. That is, L’Oréal has a deep history of turning its back on marginalized groups for profit. If your company is known to have been bolstered by one of the greatest instances of genocide in human history, adding token representatives to your roster, then silencing them, definitely doesn’t atone for your connection to bigotry.

If white and cisgender people want to espouse beliefs in equality and diversity, they must respectfully engage with the existence of transgender women of color. That means valuing us beyond what we can provide in labor, aesthetics and fulfilling quotas. That means listening and elevating our voices and experiences especially when they criticize the privileges that simultaneously benefit them and oppress us.

In the aftermath of all that has happened to Bergdorf, it is L’Oréal that comes out worse off. The company has reaffirmed its true values by aligning itself with white supremacy and that it’s understanding of diversity and inclusion truly is only skin deep. It hired Bergdorf to give the illusion that the company is invested in diversity, but it’s clear elevating the narratives of people of color isn’t on their agenda.

Bergdorf has made an even larger splash in the beauty and fashion world beyond the campaign by sticking to her beliefs. Whether Rihanna’s new beauty company, Fenty Beauty, brings her on board for its campaign (like I hope), her authentic voice will inevitably carry her even further.