Donald Trump doesn’t condone the virulently homophobic views of a man he endorsed, according to the White House.

Press Secretary Sarah Huckabee Sanders told reporters in a Thursday press briefing that there’s no “parallel” between Trump and Roy Moore, who won a runoff election in Alabama this week to fill Jeff Sessions’ vacated Senate seat. When questioned about Moore’s notoriously anti-LGBTQ background, Sanders claimed she and the president “don’t agree.”

“I have not taken a deep dive on every comment that the senatoror the Senate nomineehas made,” Sanders continued, “but I certainly know where the president stands on those issues and wouldn’t see any parallel between the two of them on that front.” 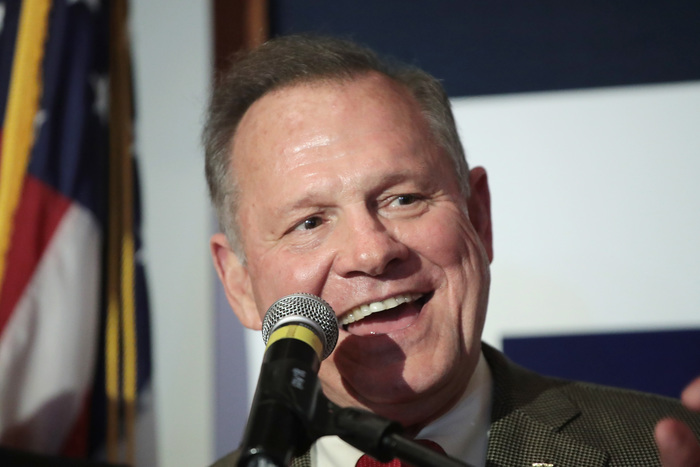 Moore, who thinks that Sandy Hook was punishment for a society that “forgot the law of God,” is one of the country’s most extremist bigots. Among his many outlandish beliefs, the GOP Senate nominee has claimed that the LGBTQ community caused the September 11 attacks and compared same-sex marriage to the Holocaust.

As a judge, Moore argued that an abusive father was better suited to be a parent than a lesbian mother, calling homosexuality “abhorrent, immoral, [and] detestable.” The former Alabama Supreme Court justice was removed from his position last year after attempting to block judges in his state from issuing same-sex marriage licenses. He was subsequently found guilty of multiple ethics violations.

But his views should be offensive to every community. Moore has claimed that Muslims shouldn’t be allowed to serve in Congress, calling a “false religion.” He once referred to Native Americans and Asians as “red and yellows.”

Although Trump supported Moore’s opponent, Luther Strange, in the Alabama runoff, the president was quick to flash the fundamentalist Christian a big thumbs up following his decisive win. “Congratulations to Roy Moore on his Republican Primary win in Alabama,” Trump wrote on Twitter. “Luther Strange started way back & ran a good race. Roy, WIN in Dec!”

The reason that Trump didn’t support Moore earlier wasn’t because of a divergence on LGBTQ rights, which he claimed to fight for as president. It’s because his advisors urged him to back Strange, an establishment candidate who had the endorsement of Mike Pence and Senate Majority Leader Mitch McConnell.

After Strange’s loss, CNN reports that Trump lambasted his aides for telling him to back a “loser.” Anonymous sources told the news station that the president went to bed Tuesday night “embarrassed and pissed.”

Moore has another theory about why Trump didn’t throw his presidential weight behind him in the election: They had never met in real life. The Alabama Republican told Fox and Friends after his victory that “when he gets to know me… he’ll understand that I do support a very conservative agenda for this country.”

Trump’s record certainly suggests that he wouldn’t have a problem supporting someone with Moore’s beliefs. A majority of his appointments to the White House have a strong record of opposing LGBTQ rights.

Since becoming president in January, LGBTQ advocates say Trump has consistently rolled back equality for queer and trans people.