The Christmas Day discovery of a quadruple homicide that happened to a couple and two young children in Troy, N.Y. were widely publicized over the last week, as were the subsequent arrests of the two alleged murderers. Justin C. Mann, 24, and James W. White, 38, were caught on a security camera entering and exiting the home of 36-year-old Shanta Myers, her 22-year-old fiancee Brandi Mells, and two of Myers’ three children, five-year-old Shanise and 11-year-old Jeremiah. But later that week, another murder of a lesbian and her daughter happened in West Palm Beach, Fla. received much less attention, despite the victim’s surviving partner speaking out against the supposed killer: her son.

Robin Denson says her 26-year-old son, Marlin Lance Joseph, shot and killed her partner, 36-year-old Kaladaa Crowell and her daughter 11-year-old Kyra Inglett. At a press briefing held in front of the West Palm Beach Police Department yesterday, Denson spoke to her son through the media.

“Kaladaa was the sweetest person,” she said of Crowell. “She’d give the shirt off her back to help anybody–she was my girlfriend and that was our home.”

Law enforcement located and arrested Joseph today, after he fled in his mother’s girlfriend’s 2012 gray Toyota Camry, which bears a Florida Bethune-Cookman University tag and license plate number BAOMJ. He was last seen at an ATM early Friday morning, around the same time Inglett was declared dead at St. Mary’s Medical Center.

Denson was outside of the house when her son, who lived with them, allegedly shot and murdered Crowell and Inglett. Denson has previously served time for battery on a child after being accused of lewd behavior with a 13-year-old girl when he was 22.

“I love my son, but I loved Kyra and Kaladaa, too,” Denson said at the press conference. “I know the family wants justice. I want justice, too.”

Police advised Denson not to give too many details about what happened on Thursday, and there have been no possible motives revealed for either case of tragic, deadly violence, including any possibility of a hate crime. Still, the fact that three lesbians have now been killed in a week’s time seems to beg the question why they are being targeted.

“There are indications at the crime scene that this was not a random act,” says John Tedesco, the Police Chief of Troy, New York, regarding the case of Myers, Mells, and their two children. “We are certainly appealing to people in the community that would have any knowledge as to what may have transpired there to contact us as soon as possible.”

Mann and White, both charged with first-degree murder and second-degree murder have entered not guilty pleas. Tedesco reported that one of the men knew the victims, but did not give any further details. Shanta Myers’ nephew Khalif Coleman told The Daily Beast that Mann had been a friend of Mells.

“I never seen him before a day in my life, neither of them,” Coleman said. “But some of my family members recognize him as Brandi’s friend. He supposedly always hung out with her.” 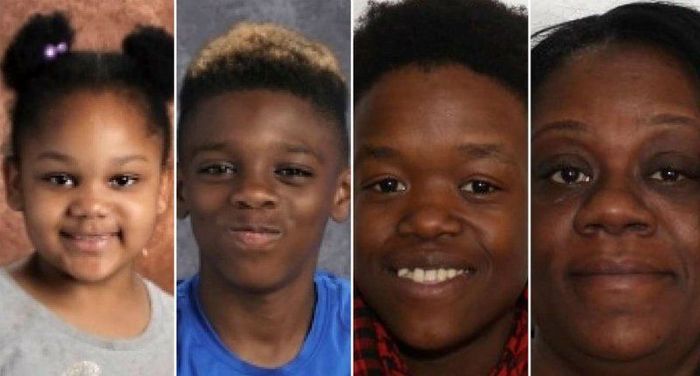 White has previously served time for manslaughter in New York prisons from 2001 to 2010. Mann also has a criminal record and had been on parole after a robbery conviction. The two were arrested at Mann’s home in Schenectady last Friday night, a week after they bound the victims’ hands and ankles and slit their throats. Two bloody knives were found at the scene.

The similarities in these two cases are too hard to ignore–black lesbians and their children killed by men who knew them and their families. In 2014, James Larry Cosby was convicted of murdering his daughter, Britney Cosby, and her girlfriend, Crystal Jackson, in Houston. During his trial, friends and family testified that Cosby was vocal about his problem with their relationship and his daughter’s homosexuality, though he never went on record to state his motive.

“These are the things we know. He had resentment. They had a better life. They were being treated differently at [Jackson’s family’s] house,” Capt. Barry Cook, an investigator with the Galveston County Sheriff’s Office said. “He didn’t agree with their lifestyle, but neither did the Jacksons. Were they killed for being gay? Who knows? He’s the only one who knows and he’s not talking.”

While certainly not explicitly specific to black families, familial homophobia is often ignored when it comes to law enforcement declaring something a hate crime. It seems, for some reason, that an anti-lesbian motive isn’t one worth bringing up by anyone other than the prosecution or people that knew the victims well, at least in Cosby’s case. But with what seems like a tragic trend of black lesbians and their children being murdered in their own homes, it’s past time to acknowledge that their being targeted was very specific.

But if Mann, White, and Joseph (should he be apprehended) don’t discuss why they committed their alleged respective murders, then will law enforcement decide to ignore that the victims’ sexual identities? Will they decide their personal relationships had nothing to do with why they the killers were motivated to kill them, when it seems all too obvious that they may have somehow been some sick inspiration for men they knew to end their lives?

In 2014, a study found that a majority of LGBTQ hate crimes are perpetrated against Blacks or African-Americans, with 1,621 of 2,568 incidents affecting Black LGBTQs that year. In 2017, more LGBTQ people were killed in hate-violence-related homicides than previous years, and that was without including those who died at the Pulse shooting in Orlando. Of the total number of LGBTQ homicides in 2017, 75% of the victims were people of color; 20 (56%) of the victims were Black. Transgender women of color face the highest murders rates, and their gender identities are often identified as part of the motive, with some perpetrators even claiming trans panic.

Researchers posited that Trump’s election and anti-LGBTQ rhetoric coming from his administration, as well as other far-right conservatives in states like North Carolina and Texas, had made it somehow more acceptable for some to act on their hatred or dislike for lesbians, gay men, bisexuals, trans men or women, and other members of the queer community.

But should those who are motivated by hate crimes are not charged for them, and if the identities and relationships of the victims are ignored as they can often be not just by law enforcement but by the press as well, it will be harder for the community to qualify an epidemic that could threaten to keep growing during a time of civil unrest inspired by those currently in power.

Sadly, Denson told the press that she didn’t have a relationship with her late partner’s family.

But Denson, Myers, Mells, and Crowell are deserving of respect as well.

Contribute to the GoFundMe set up to support the Myers Family. Donations will used to help Myers’ surviving son, 16-year-old Isaiah, survive, as well as providing mental health services for kids, families, and the community. A Celebration of Life is being held for Kaladaa Crowell and Kyra Inglett will be held on Wednesday, January 3, 2018 at 11am at Christ Fellowship – South campus in Palm Beach Gardens, Fl.