Last Tuesday’s midterm election was a watershed moment for many LGBTQ+ people running for office. The winners from the so-called Rainbow Wave include Jared Polis of Colorado, the first gay man elected governor; Sharice Davids, Kansas’ first Native American and gay congressperson; and Gerri Cannon and Lisa Bunker, two trans women elected to New Hampshire’s House of Representatives. The midterm election was also favorable to bisexuals such as Katie Hill of California, Gov. Kate Brown of Oregon, and Harrie Farrow, who was elected Justice of the Peace for Carroll County, AR. And Kyrsten Sinema just eked out a win for Arizona’s open Senate seat.

But will these successes increase bisexual visibility? Even in 2018, bisexual invisibility remains a huge problem among the LGBTQ population, despite bi+ people making up the majority of LGBTQ people. The results of bi invisibility are literally deadly; countless studies show that bi+ people have worse mental health than lesbians and gay men, and are at a high risk of suicide. Will the Rainbow Wave help, even if it’s just a little bit?

Farrow hopes so. “We need more out people to save the bi community from our health and mental health disparities,” she says. “But ironically, the best ways to get more out people is to have more out people. There has to be a sense that when you come out, you won’t be on your own being battered around by a lonely wind totally vulnerable to hate and discrimination; there has to be community and role models to embrace you when biphobes abandon and bully….Just as out and proud gay people shattered stereotypes, the same is desperately needed for bisexuals.”

“These trailblazers took the risk of being out as bi on the campaign trail,” says 33-year-old Hillary, who is a member of a Facebook group for bi+ individuals. “In Katie Hill’s case, [she was] subjected to very ignorant lines of questioning and attacks since she’s married to a man. The more we raise them up and keep mentioning the B — not just LGBT — the more we force the conversation on what it means, who we are, and how many we are.”

Indeed it is not just a lack of visibility and mental health access that plague the bi+ community, but also other forms of intersecting oppressions. Crystal Marie Fleming explains how racism and biphobia intersect for bi+ black people in a 2015 HuffPost article.

Not only do black bisexuals have to face both racism and biphobia, Fleming says, but also sexism, transphobia, and fact that most LGBTQ spaces center around white cis gay people.

“We are routinely given the ‘side eye’ from multiple communities,” she writes, “misunderstood, implicitly or explicitly excluded or reduced to exotic sexual objects. We also experience poorer physical and mental health relative to other sexual minorities. It’s a lot to deal with.”

“One of the main issues on the platform I ran on was bringing the Latino community into local politics, decision making, and leadership of our county,” Farrow says. She says she has plans to meet with “a local Latino leader in the state” to have further discussions.

“[I’m] inviting him to talk to the Quorum Court, [which is the] county governing body that I’ll be serving on,” she says. “Another issue on my platform was making sure our county government is welcoming to all peoples in the community. Just being someone on the Quorum Court assuring that anyone that comes to a meeting will be welcomed and respected can make a huge difference. Likewise, being a voice for LGBTQ people, and those — like the Latino community — not represented there at all, will be impactful.”

Hopefully as Justice of the Peace, Farrow can promote equity and social justice for everyone in her community. Like so many progressives, her campaign was largely a reaction to the Trump presidency.

“Seeing how much trouble our country is in made me want to act on as many fronts as I could to affect change,” she says. “That ranges from getting arrested protesting in D.C. at the Kavanaugh hearing to running for local office.”

Progressive Democrats in Farrow’s area asked her to run for office and, despite living in a conservative county, her predecessor was a gay man, so her biphobia wasn’t a huge obstacle.

“Though my county and state are right-wing oriented,” she explains, “my town [Eureka Springs] is not.” 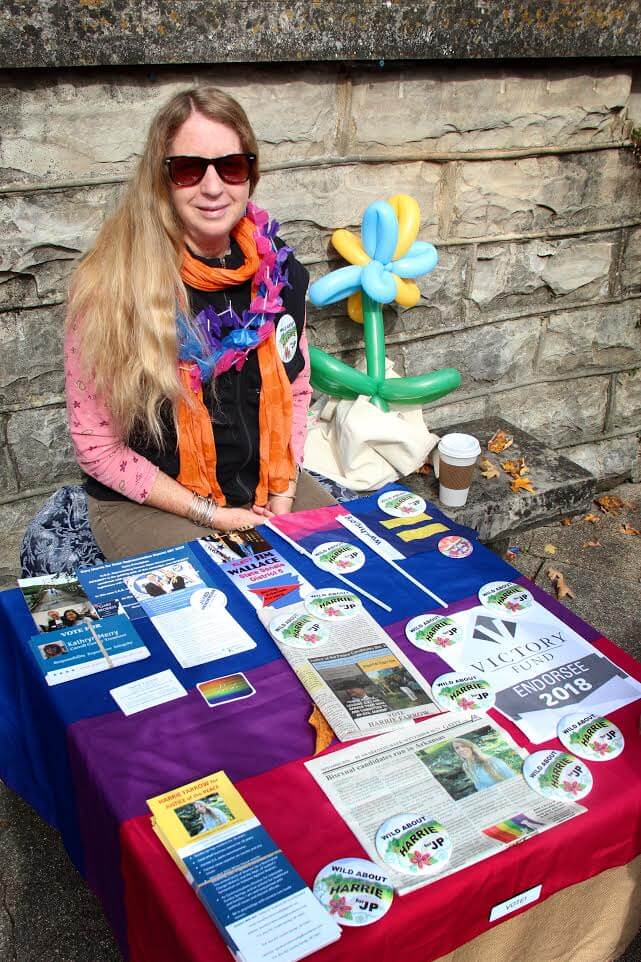 And because Eureka Springs is progressive and LGBTQ-friendly, Farrow had a huge community supporting her, which helped her defeat her anti-LGBTQ opponent, Ferguson Stewart. By being true to herself, she says, “I believe made it difficult for anyone who tried to throw stones.”

While the elections of Farrow and Hill and the re-election of Brown will help increase bi+ visibility, liberation for all bi+ people is a continual process. As BiNet USA president Lynnette McFadzen tells INTO, the Rainbow Wave “is creating an atmosphere of bravery for those who were in the closet before,” and that includes bi+ people.

However, there is still plenty of work left to be done when it comes to dismantling not only biphobia, but also racism, sexism, transphobia, ableism, and other intersecting forms of oppression many bi+ people face. Hopefully everyone who’s part of the Rainbow Wave will do their part to promote equity and social justice for all.