Retired lawyer Teresa Shook is often referred to as the founder of the Women’s March, having created a Facebook event calling for a “Million Women March” shortly after the election of President Trump. But after controversy over the naming of the event — which seemed to gloss over the Black-led Million Woman March that took place in Philadelphia in 1997 — a coalition of mostly women of color was appointed to lead what has since become a massive worldwide movement.

Last Monday, Shook called on the current leadership of the Women’s March to step down. In a Facebook post, Shook, who has never served as part of the Women’s March board or staff in any official capacity, said that co-chairs Bob Bland, Carmen Perez-Jordan, Linda Sarsour, and Tamika Mallory “have steered the Movement away from its true course” by allowing “anti-Semitism, anti-LBGTQIA sentiment and hateful, racist rhetoric to become a part of the platform by their refusal to separate themselves from groups that espouse these racist, hateful beliefs.”

Shook is not alone in her quest. A petition on Change.org that calls for the co-chairs to step down has been signed over 6,000 times. And in an October interview with The Advocate, actress and prominent activist Alyssa Milano announced that she was disavowing the Women’s March leaders as well, saying she would not speak at a Women’s March event until the organization condemned Nation of Islam leader Louis Farrakhan and calling it “Unfortunate that none of them have come forward against him at this point.”

All four Women’s March co-chairs have been under fire this year for allegedly refusing to distance themselves from the rhetoric of Farrakhan, the leader of Nation of Islam — a Black nationalist group that is designated an extremist hate group by the Southern Poverty Law Center. The criticism stems from Mallory’s attendance at the Nation of Islam’s annual Savior’s Day event, at which Farrakhan made extremist anti-Semitic statements.

Ironically, Farrakhan was the lead organizer of the 1995 Million Man March that inspired the Million Woman March two years later — the root of controversy over Shook’s original call for a “Million Women March.” But his pattern of making extreme anti-Semitic and sometimes homophobic statements — saying things like “It’s the wicked Jews, the false Jews that are promoting Lesbianism, homosexuality” in a 2006 Savior’s Day speech — does not look as if it’s going to change.

In a March op-ed for Newsone addressing the criticism, Mallory explained that she’s attended the event since she was a child, and that while she disagreed with Farrakhan’s views, she also found it baffling that critics insisted that she personally take responsibility for his statements.

“As I do not wish to be held responsible for the words of others when my own history shows that I stand in opposition to them,” said Mallory in the op-ed, “I also do not think it is fair to question anyone who works with me, who supports my work and who is a member of this movement because of the ways that I may have fallen short here or in any other instance.”

Mallory said that she found it most important to “work across ideological lines” and “go into difficult spaces” rather than simply denounce a Black-led Muslim movement that she essentially grew up in.

“I was raised in activism and believe that as historically oppressed people, Blacks, Jews, Muslims and all people must stand together to fight racism, anti-Semitism and Islamophobia,” said Mallory in the op-ed. “I believe that LGBTQAI people are not an abomination or a creation of man, but simply people, and that religion is not to be used as a tool to abuse, divide, harm, bully or intimidate.”

Also in March, Women’s March released a long statement that said, in part, “We will not tolerate anti-Semitism, racism, misogyny, homophobia, and transphobia and we condemn these expressions of hatred in all forms.” The statement clearly referred to the controversy over Mallory’s attendance at a Farrakhan speech: “Minister Farrakhan’s statements about Jewish, queer, and trans people are not aligned with the Women’s March Unity Principles.”

But the criticism against Mallory for her link to Nation of Islam has only increased in fervor in the past couple of months, reaching a peak after the deadly October 27 mass shooting at Pittsburgh’s Tree of Life synagogue that opened up a newfound awareness of increasing anti-Semitism in far-right America.

Amid increasing pressure over the past few weeks, Women’s March posted a November 8th statement on Facebook that both emphatically rejected Farrakhan’s rhetoric and reiterated support for Mallory and Sarsour.

“We recognize the danger of hate rhetoric by public figures. We want to say emphatically that we do not support or endorse statements made by Minister Louis Farrakhan about women, Jewish and LGBTQ communities,” said the November 8th statement on the Women’s March Facebook page.

But despite the leadership’s repeated efforts to explain their stance and affirm support for LGBTQ and Jewish communities, the criticism has not slowed down.

“Mallory’s support of Farrakhan and Sarsour’s promotion of Sharia law in the U.S. are reason enough to at least question why these two women were put in positions of leadership over [Women’s March], in the first place,” Shook told INTO in an email.

To be clear: Sarsour does not support Sharia law. But the idea that she does, based on her Muslim faith and Palestinian-American heritage, is a popular right-wing conspiracy theory that has repeatedly resulted in threats against her life.

The latest alt-right campaign against Sarsour is based on false claims that she stole money raised for the victims of a Pittsburgh synagogue shooting. A Wednesday headline in the conservative Washington Examiner blared “Linda Sarsour Uses The Blood Of Murdered Jews To Line Her Pockets,” and a Townhall story claimed the money raised “went to an Islamic center with terror ties.” But the story, like so many that circulate about Sarsour, is utterly fake.

In a statement on Wednesday, the national organization Bend The Arc: Jewish Action denounced the “disgusting attacks” against Sarsour, saying “These baseless smears not only seek to vilify Linda, they also serve to erase the incredible outpouring of love and solidarity from the American Muslim community in the wake of the largest anti-Semitic massacre in our country’s history.” 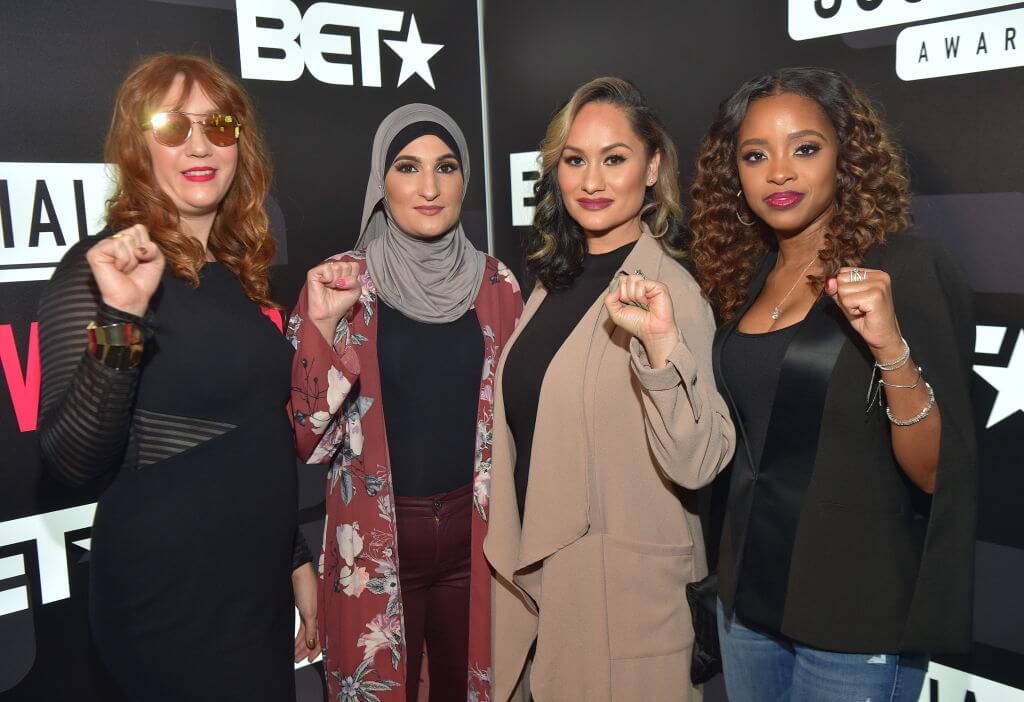 Baseless anti-Semitism claims against Sarsour are so dogged, there is now a group called Jews For Linda devoted to counteracting them. And in a May 2017 letter amid a different flurry of false conspiracy theories targeting Sarsour, dozens of Jewish leaders from religious and community groups signed onto a letter of support, saying, “We will not stand by as Sarsour is falsely maligned, harassed and smeared.”

While Sarsour’s Palestinian roots and Mallory’s Nation of Islam links have led to accusations against both of anti-Semitism, rarely have either been accused of being anti-LGBTQ. When asked specifically about the basis for the “anti-LBGTQIA sentiment” accusation, Shook responded with a hypothetical comparison.

“Would you support someone who applauds a Neo-Nazi or homophobic evangelical on their social media sites? No. You would condemn it immediately as hate speech,” Shook told INTO. “But, just because the hate speech comes from women of color who cry ‘racism’ at every legitimate critique, do we allow such behavior to exist in our leadership? Again, no. This is abusive and silencing. And, we will not be silenced by the same tactics with which racism and sexism has silenced us.”

According to a Women’s March staffer who spoke on background, about 50 percent of the organization’s staff identifies as LGBTQ. The staffer told INTO that queer members of the organization were perplexed by Shook’s accusations, and that Shook had not reached out directly to the leadership team before publicly denouncing them in the Facebook post.

In a statement emailed to INTO, Women’s March co-chair Linda Sarsour affirmed the group’s commitment to LGBTQ equality.

“The Women’s March exists to fight bigotry and discrimination in all their forms — including homophobia, transphobia, and anti-semitism — and to lift up the voices of people who are too often left out,” said Sarsour. “We believe in a world where women and Queer people from all backgrounds are equally represented in government, media, politics, and everywhere and invite everyone who shares these values to join us.”

Shook’s post not only called for the leaders to step down, but also asserted her sense of ownership over the movement writ large, saying she is “stepping up to bring focus back to the Unity Principles on which our movement began.” Speaking on background, a Women’s March staffer said Shook had not been involved in the drafting of the movement’s Unity Principles.

In her email to INTO, Sarsour said that building an intersectional movement can be “hard” and “messy” work.

“Every member of our movement matters to us — including our incredible Jewish and LGBTQ members,” said Sarsour. “Trying to dismantle oppression, while working within systems of oppression, is hard. We are committed to creating a movement where all are welcome.” 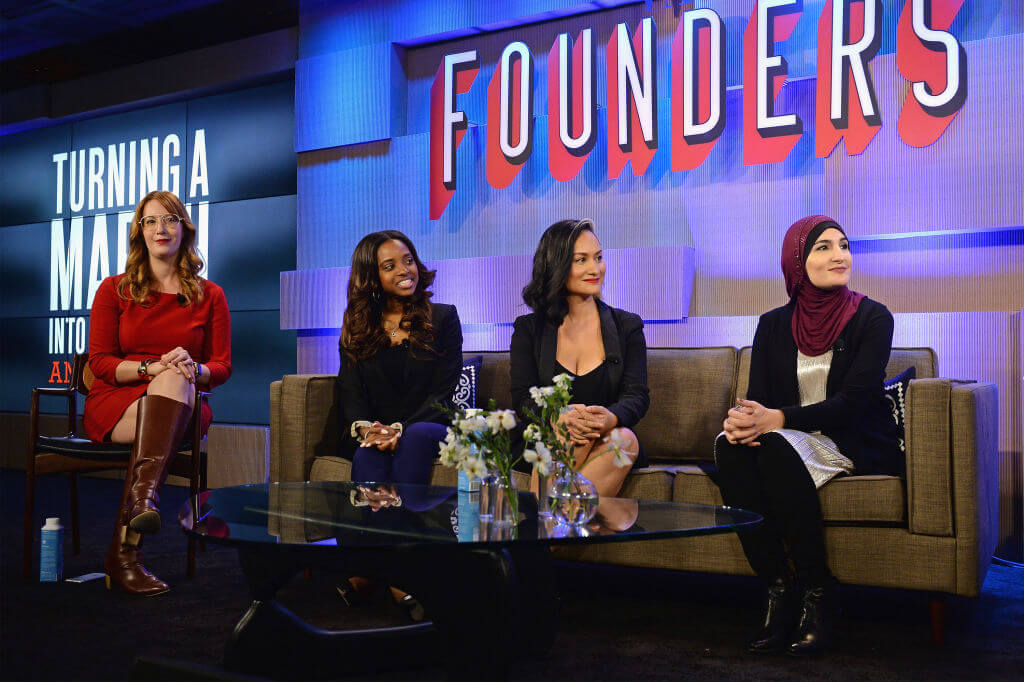 “We are building an intersectional women’s movement,” Sarsour added. “That is a monumental task that is hard, it is messy. We are here for every hard conversation, we are thankful for the folks who have reached out to us directly and who have spoken up more broadly, and we extend an invitation to everyone who has not yet reached out to do so.”

Full disclosure: The reporter of this story was a communications director for the New York City chapter of the 2017 Women’s March on Washington.