If the Supreme Court rules in favor of a baker looking to reject same-sex wedding cake commissions, it will spell disaster for anti-discrimination protections. But that’s a far-fetched scenario, according to LGBTQ advocatesat least in full.

“I can imagine a worst case scenario coming out of the court that says speech issues trump public accommodation interests, but I can’t imagine that coming out of this court,” Robert Tuttle, Professor of law and religion at George Washington University, tells INTO.

Tuttle is among several church-state scholars to sign an amicus brief supporting Charlie Craig and David Mullins in their case against Masterpiece Cakeshop after owner Jack Phillips refused to bake them a wedding cake in 2012. The couple won their case before the Colorado Civil Rights Commission, and the case now faces the test of the U.S. Supreme Court, where the outcome could reshape anti-discrimination law.

Justice Anthony Kennedy, expected to cast the deciding vote, appears undecided. He ruled in favor of marriage equality in 2015, but expressed concerns that Colorado had not shown enough tolerance for Phillips’ faith.

Phillips has argued that his Christian faith prevents him from making the couple a cake and that forcing him to do so would violate his right to free speech. LGBTQ advocates point out that a ruling for Phillips would allow businesses to use religion to discriminate.

“The breadth of the rights they seek is really quite extraordinary,” says Ria Tabacco Mar, Staff Attorney for the American Civil Liberties Union. “The court has never before recognized a constitutional right to discriminate.”

According to Mar, that kind of ruling for Phillips would be so dramatic, it’s hard to imagine. But experts agree, it could obliterate protections not just for LGBTQ people, but for people of color, people with disabilities, women and other vulnerable groups.

“At stake is the basic principle that everyone should be able to be served at a restaurant regardless of who they are,” says Janson Wu, executive director of GLBTQ Legal Advocates & Defenders in Massachusetts. 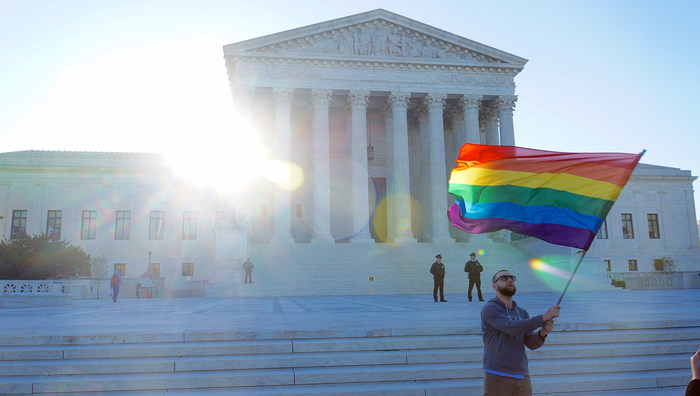 Massachusetts, long hailed as a beacon of LGBTQ rights and the first state to win marriage equality in 2014, is facing its own battle. Voters will decide next year if they want to repeal transgender protections, which took effect last year.

Wu is not counting on the state’s progressive reputation to defeat the repeal effort.

“I think people maybe have the false confidence that Massachusetts will easily vote this down,” Wu says. “People are hell bent on making an example of Massachusetts.”

A loss in Massachusetts, he says, would embolden anti-gay activists from coast to coast in states where LGBTQ anti-discrimination protections are still sorely needed, especially as the Supreme Court weighs cases like Phillips’.

But Tuttle says, don’t expect a sweeping defeat in the Masterpiece Cakeshop Case.

“It just hard for me to believe that Justice Kennedy would accept a complete exemption from anti-discrimination norms,” he says.

If anything, he says, the court would carve out a narrow win for Phillips, very specific to him in attempt to prevent the catastrophic undoing of protections that advocates fear.
Mar also remains cautiously optimistic.

“It’s important to remember that the court could write its opinion in a lot of different ways,” she says.