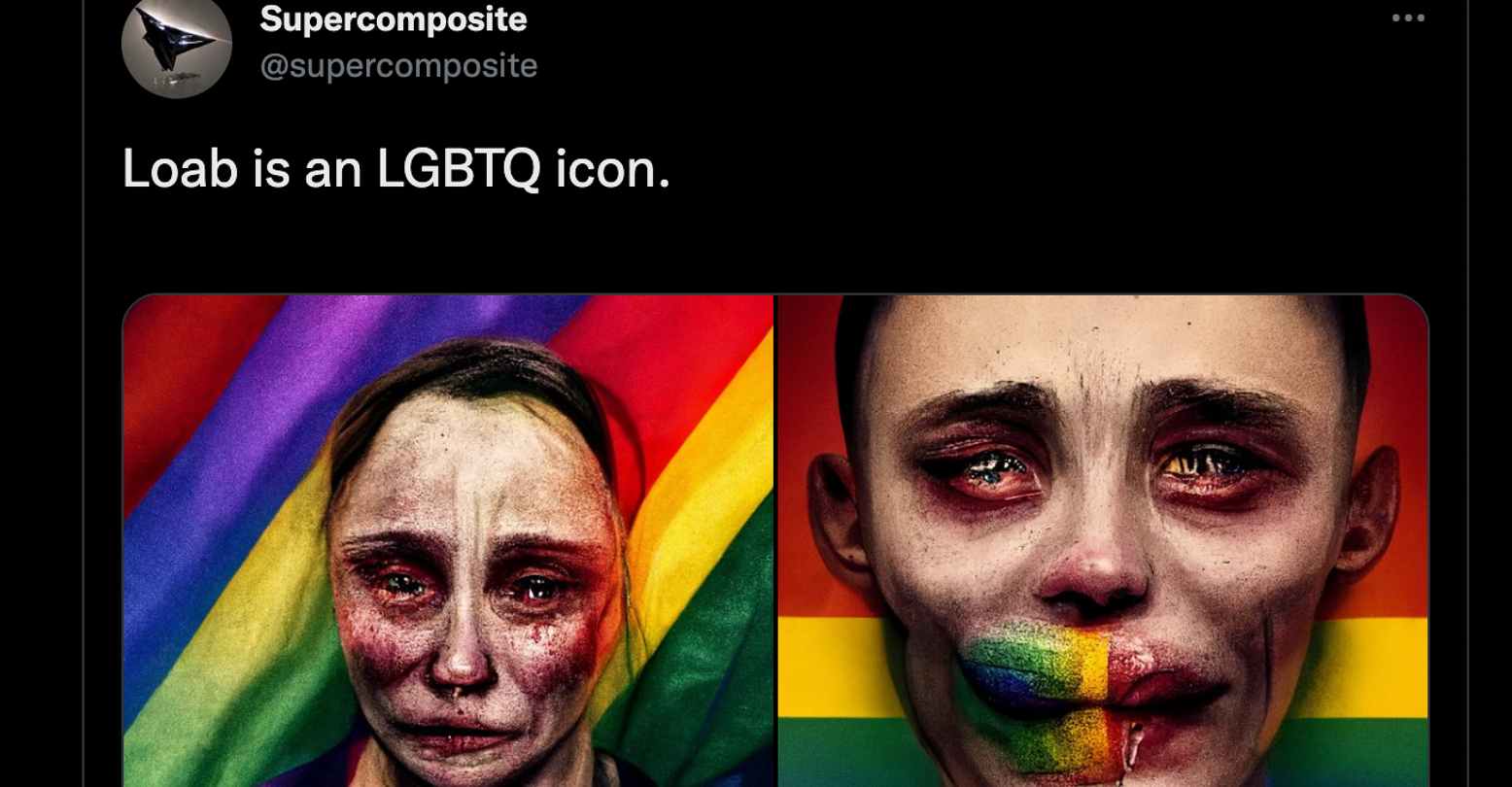 Although spooky season is still weeks away, the rapid advance of technology waits for no one—ready or not, an AI art generator is already giving us nightmares. Haunted images are nothing new to AI artwork (made by software that prompts users to type in keywords for image concepts). But the latest is a recurring face so specific and so creepy, it might just have a life of its own.

It all began when Swedish synth musician Supercomposite decided to mess around with an AI software she has chosen not to disclose. Within a number of her image results lurked the gaunt face of a woman with deep rosacea patches under her eyes. Supercomposite shared her experience in a Twitter thread that has become the stuff of creepypasta greatness.

“I discovered this woman, who I call Loab, in April,” wrote Supercomposite.  “The AI reproduced her more easily than most celebrities. Her presence is persistent, and she haunts every image she touches.”

🧵: I discovered this woman, who I call Loab, in April. The AI reproduced her more easily than most celebrities. Her presence is persistent, and she haunts every image she touches. CW: Take a seat. This is a true horror story, and veers sharply macabre. pic.twitter.com/gmUlf6mZtk

Supercomposite was experimenting with “negative weight” search terms. Essentially, this commands the AI to generate an image at the extreme, conceptual opposite of whatever search term is used. Supercomposite tried “Marlon Brando,” and this gave her a strange logo showing a city skyline. She tried another negative weight based on this logo, wondering if it would lead back to Marlon Brando. Instead, it created “Loab.”

At first, the initial images of Loab were strange but only a little off-putting—an older woman staring forlornly out from the center of the image. When pictured far away, Loab’s face became distorted and skull-like, yet still somehow recognizable.

I wondered: is the opposite of that logo, in turn, going to be a picture of Marlon Brando? I typed “DIGITA PNTICS skyline logo::-1” as a prompt. I received these off-putting images, all of the same devastated-looking older woman with defined triangles of rosacea(?) on her cheeks. pic.twitter.com/tnhBzWPHYf

Like a character in a horror film investigating a strange noise, Supercomposite chose to explore the AI further. She wanted to see what would happen if she combined one of the more plain photos of Loab with a more wholesome AI image a friend of hers had made, an angelic scene inspired by Wes Anderson. The result was pure horror: blood, gore, dismemberment, ghastly children, mutating faces, all overseen by Loab.

Here is Loab as a bee, and Loab celebrating Pride month. Loab can be recognizably transposed into many genres and contexts. pic.twitter.com/lSV1zYi9Xd

She ventured further, “crossbreeding” these results with even more images. Loab was always there. “The AI can latch onto the idea of Loab so well that she can persist through generations of this type of crossbreeding, without using the original image,” Supercomposite said. “Even when her red cheeks or other important features disappear, the ‘Loabness’ of the images she has a hand in making is undeniable. She haunts the images, persists through generations, and overpowers other bits of the prompt because the AI so easily optimizes toward her face.

Like most horror entities (see the Babadook, Pennywise, and Chucky), Loab quickly became a queer icon. In between the scenes of nightmare and terror, Supercomposite naturally wondered what Loab might look like celebrating Pride.

This was followed by more evidence that Loab, who is definitely an AI-spawned demon, is also an LGBTQ+ ally.

But what, at the end of the day, is Loab? Clearly, she is the result of a computer algorithm, but as anyone who has spent time online knows, that makes her no less a mystery. Supercomposite has her own theory: “She is an emergent island in the latent space that we don’t know how to locate with text queries. But for the AI, Loab was an equally strong point of convergence as a verbal concept.”