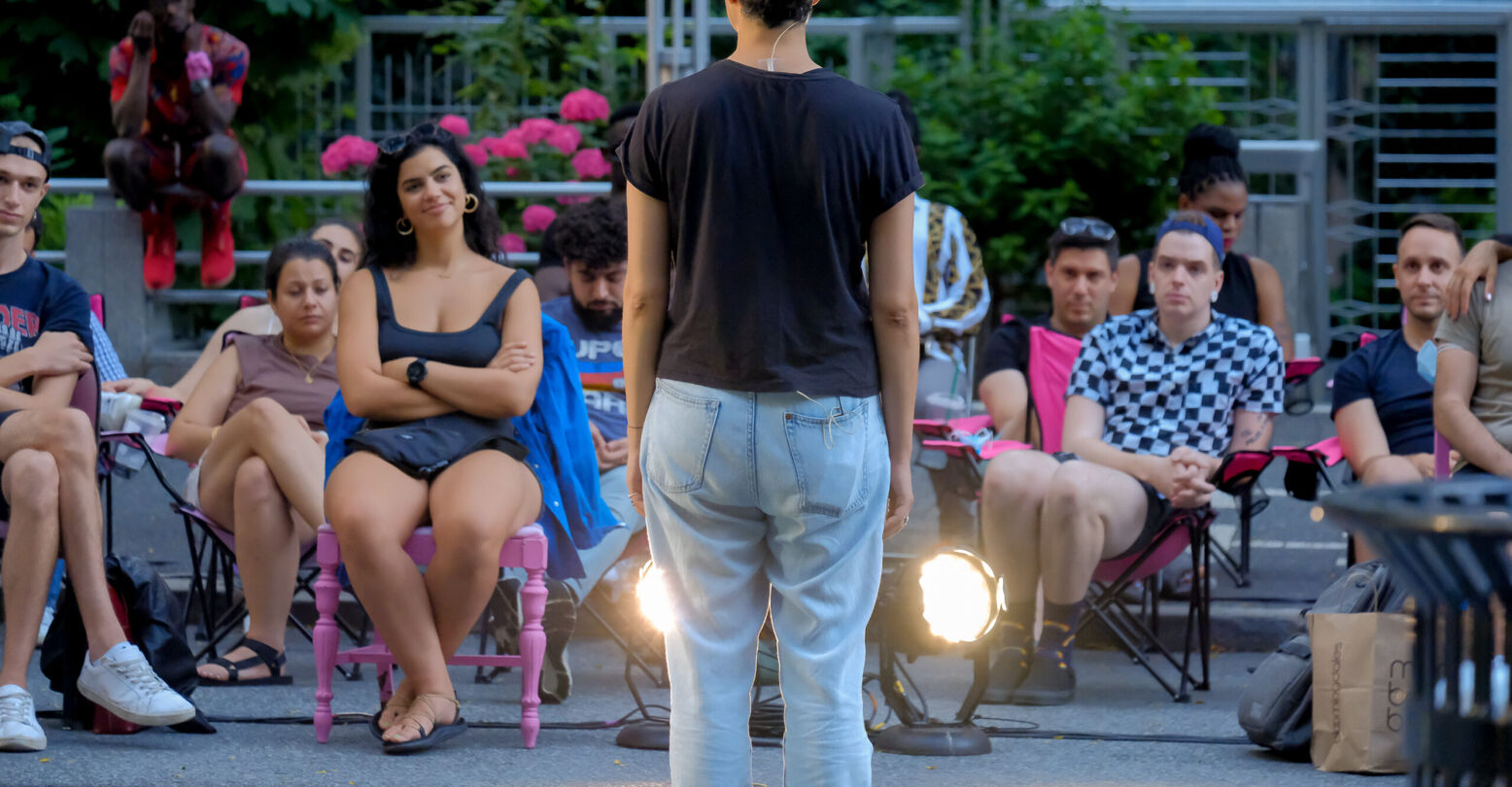 In 2016, Ugandan writer Achiro P. Olwoch started developing a new play: “The Survival.” It tells the story of a woman who has sex with a gay man, becoming pregnant out of wedlock. But under Uganda’s anti-LGBTQ+ laws, the play’s themes of queerness and premarital sex meant that not only could it not be produced, but even writing it put Olwoch in serious danger.

“My desire was definitely to have it performed in Uganda, but nobody would take it on,” says Olwoch. “It’s censored. This play would never have seen the light of day back home.”

This June, however, the play will get a full production at Lincoln Center in New York City as part of the Criminal Queerness Festival, an annual series of original plays by writers from countries where being LGBTQ+ is criminalized.

“We are a community organization, a theatre company really built to uplift queer stories and queer artists,” says Adam Odsess-Rubin, the founding artistic director of NQT. “In addition to staging new plays and working with queer artists, it’s really about uplifting the whole community and using theater as a tool for queer liberation.”

That includes running a plethora of free education programs: Write It Out!, a 10-week workshop for playwrights living with HIV; the New Visions Fellowship, a yearlong residency for Black trans and gender-nonconforming playwrights; DREAMing Out Loud, a workshop program for undocumented LGBTQ+ teens; and, among others, the Criminal Queerness Festival itself, which Odsess-Rubin co-founded in 2019.

Odsess-Rubin first conceived the festival after a play from Egypt landed in his inbox in 2018. It was “​​Drowning in Cairo” by Adam Elsayigh, which centered on the 2001 raid of the Queen Boat, a gay nightclub docked on the Nile River. Odsess-Rubin and Elsayigh met over Skype to discuss the play in more detail.

“I asked Adam if he had done the play in Egypt, and he kind of laughed at me and was like, ‘Of course not. We’d all be arrested.’ And that really hit me,” Odsess-Rubin says. “I, in my American naivete, really didn’t realize the stakes that international artists from countries where homosexuality was illegal, or that censored queer art — I didn’t realize the level of censorship that was happening for queer artists.”

First, Odsess-Rubin offered to produce Elsayigh’s play. Then, the two started thinking about how many other marginalized queer playwrights were in the same boat, unable to see their work on stage because of censorship. Thus, the Criminal Queerness Festival was born, with the first festival taking place as part of WorldPride in 2019.

“Since then, we’ve worked with playwrights from over 10 countries, from the tiniest little black box to Lincoln Center, really with a mission to showcase international LGBT plays that might not otherwise be able to be staged in their home countries and do it in an affirming uplifting space that is free from censorship,” Odsess-Rubin says.

Odsess-Rubin says the festival is more than just a run-of-the-mill theater experience. By focusing on amplifying censored queer artists from around the world, the Criminal Queerness Festival is also a powerful educational tool for Americans.

“When Americans, and specifically queer New Yorkers, understand what’s happening for LGBT people around the world, it actually changes the Gay Agenda,” he says. “The festival is not only producing plays, but it’s a protest. It’s a piece of artistic activism to drive American political interests towards international issues, making sure that we’re putting pressure on countries that criminalize LGBT people, whether it’s through their sanctions, whether it’s through diplomacy, and educating Americans about the realities of LGBT life.”

This year’s festival features plays by Muleme Steven, also from Uganda, Jonathan Opinya Wamukota of Kenya, and, at long last, Olwoch’s “The Survival.”

Technically, this isn’t the first time “The Survival” has had an audience. Back in Uganda, Olwoch did produce a reading of a previous version of the play, titled “The Surrogate,” but the process was fraught with resistance and threats of violence.

The show did go on, but the threats against Olwoch continued, even leading to an assault.

“I got warnings about it after I’d done the reading. I got bitten on my back in the middle of the street soon after that,” she says. I was handicapped for a while — actually, a whole year. I had sciatica: I couldn’t move, couldn’t stand, couldn’t sit. I kind of had a bullseye on me concerning the kind of work that I do.”

Eventually, Olwoch had no choice but to flee to the United States.

“I came in the dead of the night with just a rucksack. Because days prior to that, I’d gotten text threats, and also I started to see the van that goes around picking up people and abducting them around my neighborhood,” she says. “It’s only after I arrived in the U.S. that I started to breathe.”

Olwoch is currently seeking asylum, but it’s an extremely unpredictable process, and she doesn’t know when she’ll get a decision from the U.S. government. In the meantime, Olwoch says she feels like she’s “in exile.”

“Asylum means at least for the next five years, I cannot return to my country,” she says. “What hurts me is the fact that I’m neither Ugandan nor American. No side can claim me, or I can’t claim to be either side. I’m literally just there.”

Sharing stories like Olwoch’s is the point of the Criminal Queerness Festival: to diversify the perspectives we see on major stages, even within representations of queerness.

“When we look at the history of LGBT people in theater, we think about “Angels in America,” “Rent,” “The Boys In The Band,” “The Normal Heart,” even “Fun Home.” They’re all written by cisgender white people,” Odsess-Rubin says. “And it’s not an accident, because LGBT people of color and trans people have been systemically excluded from opportunities in the theater, in media. Their voices have been silenced.”

This year’s Criminal Queerness Festival takes place June 21–24 at Lincoln Center in New York City. Olwoch’s play specifically is on Friday, June 24 at 7:30. Seats at the festival are free and given out on a first-come, first-served basis, keeping the festival accessible to all people regardless of financial status and making its revolutionary representations as wide-reaching as possible.

“Positive representation on stage and on film leads directly to safety and empowerment and recognition for marginalized queer communities in real life, at the ballot box, in society,” Odsess-Rubin says. “Because if people don’t know queer people of color and trans people, they’re less likely to accept them. And one way that we get to know people is through fiction, is through theater, is through film. So by staging these stories, we get to know each other a bit better, we have more empathy, and that leads to a more equitable society at large.”