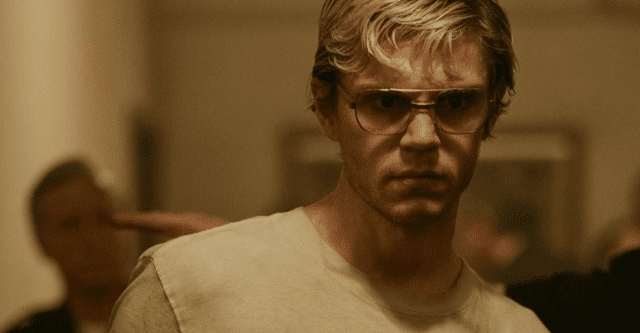 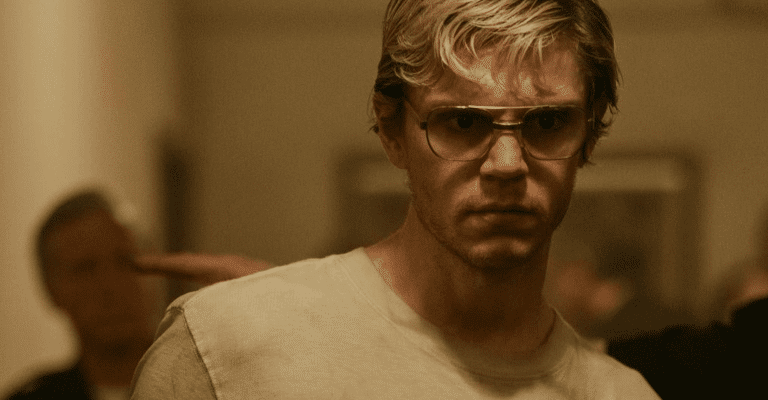 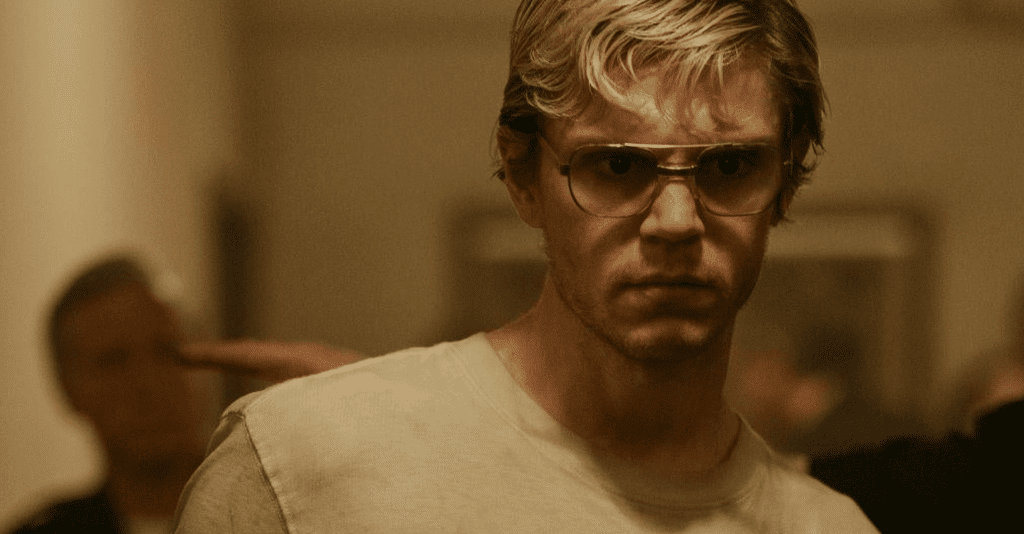 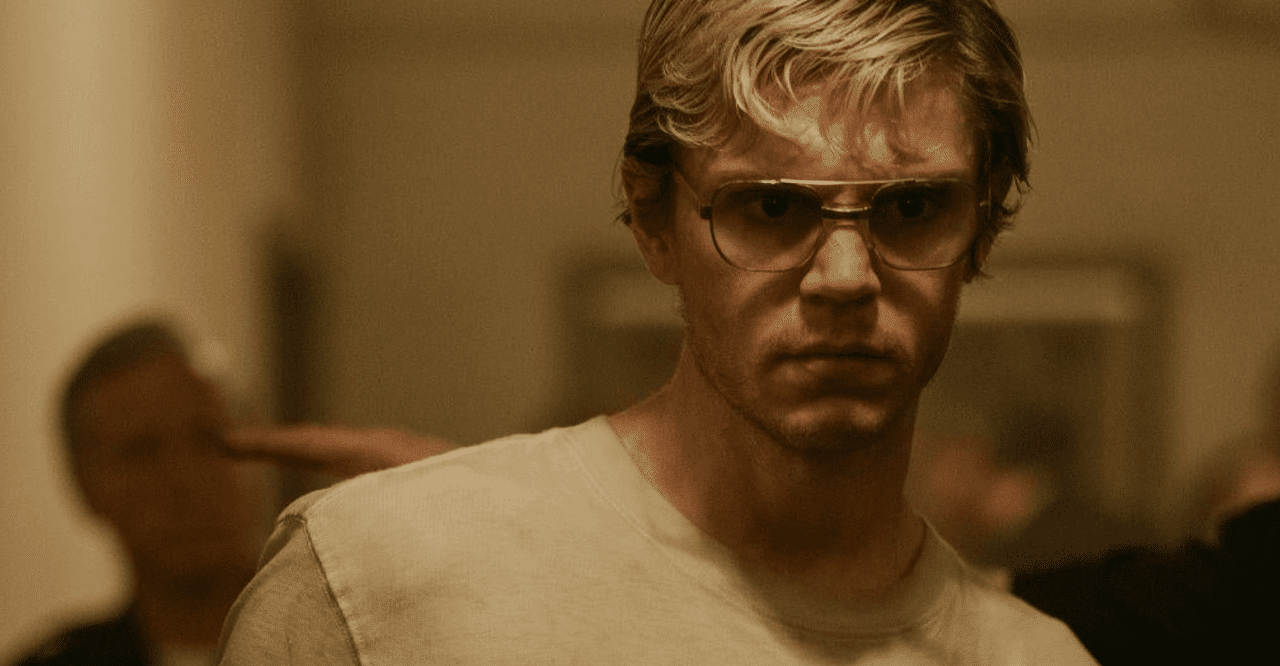 Three episodes into Ryan Murphy’s “Dahmer”, I’m watching Evan Peters as the titular serial killer lovingly caress a silver mannequin he’s brought home with him. In a few scenes, I’ll watch Dahmer struggle to masturbate to images of naked women after being told by his grandmother that being gay is, essentially, a crime against God. A few episodes later, the focus will be on Dahmer after he invites a dancing twink to his apartment and wakes up to find that twink dead, his chest caved in by a blunt instrument we can’t see. We can’t see it, because we’re watching the show from an entrenched, specific point of view: that of Dahmer himself.

For those who by some stroke of magic don’t know the Dahmer story, it goes like this. Jeffrey Dahmer was a prolific Milwaukee serial killer who preyed on young queer victims from marginalized communities, finding young Black, brown, and Asian men to take home before drugging them, dismembering them, or, in some cases, giving them icepick lobotomies. It’s a gruesome story that our culture remains obsessed with, and there are scores of podcasts, documentaries, movies, and shows about the Dahmer story.

So why did Ryan Murphy decide that he needed the world to see his own take on it? According to Murphy himself, it was in order to give Dahmer’s victims—primarily young queer men of color—a voice.

But that’s not what shows up on screen. Not even slightly. Instead, what we get is a Jeffrey Dahmer origin story, one that seeks to explore the “why” of Dahmer’s actions by letting us see his childhood, his interactions with his family and society at large, and his early attempts at suppressing his queer sexuality.

If you’ve seen any Ryan Murphy property in the past 106 years, this will all feel extremely familiar to you. Because that’s what Ryan Murphy does: he tries to exonerate serial killers—real or imagined—by implying that homophobia made them this way.

I’m sure I don’t need to tell you how irresponsible that is. For a show that claims to be on a mission to honor the stories of Dahmer’s victims, it’s also telling that the families of those victims were not consulted ahead of production. If you’ve glanced at Twitter this week, you already know this.

I’m not telling anyone what to watch, I know true crime media is huge rn, but if you’re actually curious about the victims, my family (the Isbell’s) are pissed about this show. It’s retraumatizing over and over again, and for what? How many movies/shows/documentaries do we need? https://t.co/CRQjXWAvjx

Viewers are finding it even more insulting that Ryan Murphy thought he was the one to tell a story about anti-Black police violence while romanticizing a prolific killer of Black and brown men.

Jeffrey Dahmer did NOT need another platform to be humanized for entertainment; this series is simply an another explain of how the POLICE has failed us, in my opinion! The fetishes & jokes are sick & traumatizing to the victims families & friends. @netflix you failed us‼️

Even worse is the thirst effect: because the killer is given a sympathetic backstory and played by Evan Peters, some viewers are mistaking what should be a chilling indictment of white privilege for a story about a misunderstood softboi.

hundreds of people are saying that they feel sorry for jeffrey dahmer, that they would write letters to him if he was alive and that he didn’t hurt his victims “that much” pic.twitter.com/i8swXX4lVn

Can we talk about how y’all hate seeing gay men loving each other on TV (e.g. How to Get Away With Murder and P-Valley), but y’all are totally fine with Dahmer, a show about the murders and disgusting sexual violations of gay men of color by a notorious white male serial killer?

Which is exactly what happens when you try to build narrative context around something that can’t be explained away.

To be absolutely clear, this isn’t just Ryan Murphy’s problem, though he’s a top offender in this department. When you try to tell a story about someone who committed unspeakable acts of violence, especially against marginalized communities, you are by definition glorifying them. It may not be in the intention, but the effect is the same. To tell a story about Jeffrey Dahmer, Murphy had to create a narrative around him, starting from childhood. He had to turn the killer into someone audiences could identify with. Because otherwise, who would watch the show that’s now responsible for creating Netflix’s biggest opening week streaming numbers of all time?

To create a real story about Dahmer–one that didn’t rely on viewer empathy–Murphy would have had to make something much, much less narratively-satisfying, less bingeable, than the product he ended up creating. There’s a reason why it’s nearly impossible to get through the film Henry: Portrait of a Serial Killer, much less watch it for a second time. It’s because it’s brutally, disgustingly honest about the act of killing, and the nature of psychopathy.

Murphy is a maker of horror, but not the kind of horror that forces you to look away. His approach to blood and guts has always been a rubbernecking one: he wants us to look, and look again, and to keep looking. He wants to create a theatricality and camp value out of horrible acts. He wants evil, in other words, to be a little bit sexy. And in the case of “Dahmer,” that’s an insult to the families who still have to deal with the painful, traumatic reality of what happened to their loved ones years ago.

Please seek help if you’re thirsting for Jeff Dahmer, the man killed, dismembered and cannibalized 17 boys and men. He would’ve probably carried on had he not been caught. There are families still living with the pain of never seeing their loved ones ever again. https://t.co/0wzQrinT3t

Let’s remember, too, that Dahmer’s story, while shocking, is far from an isolated case of targeted violence against queer men of color. As Jasmyne Cannick has pointed out, there are still predators like this who walk among us. Ed Buck, a serial predator and killer of Black men, almost walked free earlier this year. Why? Because the system is still broken, and it’s still failing queer men of color daily.

I finished Dahmer on @netflix and I gotta say the parallels to #EdBuck were not missed on me.

“Dahmer” isn’t the radical retelling it thinks it is. It’s treading old, dangerous ground, and it’s hurting people in the process.

#DahmerNetflix is out, let’s not romanticize Jeffrey Dahmer just because he is played by Evan Peters.
Remember the victims.
A tread about each victim and who they were. pic.twitter.com/3NAZpG40Dq