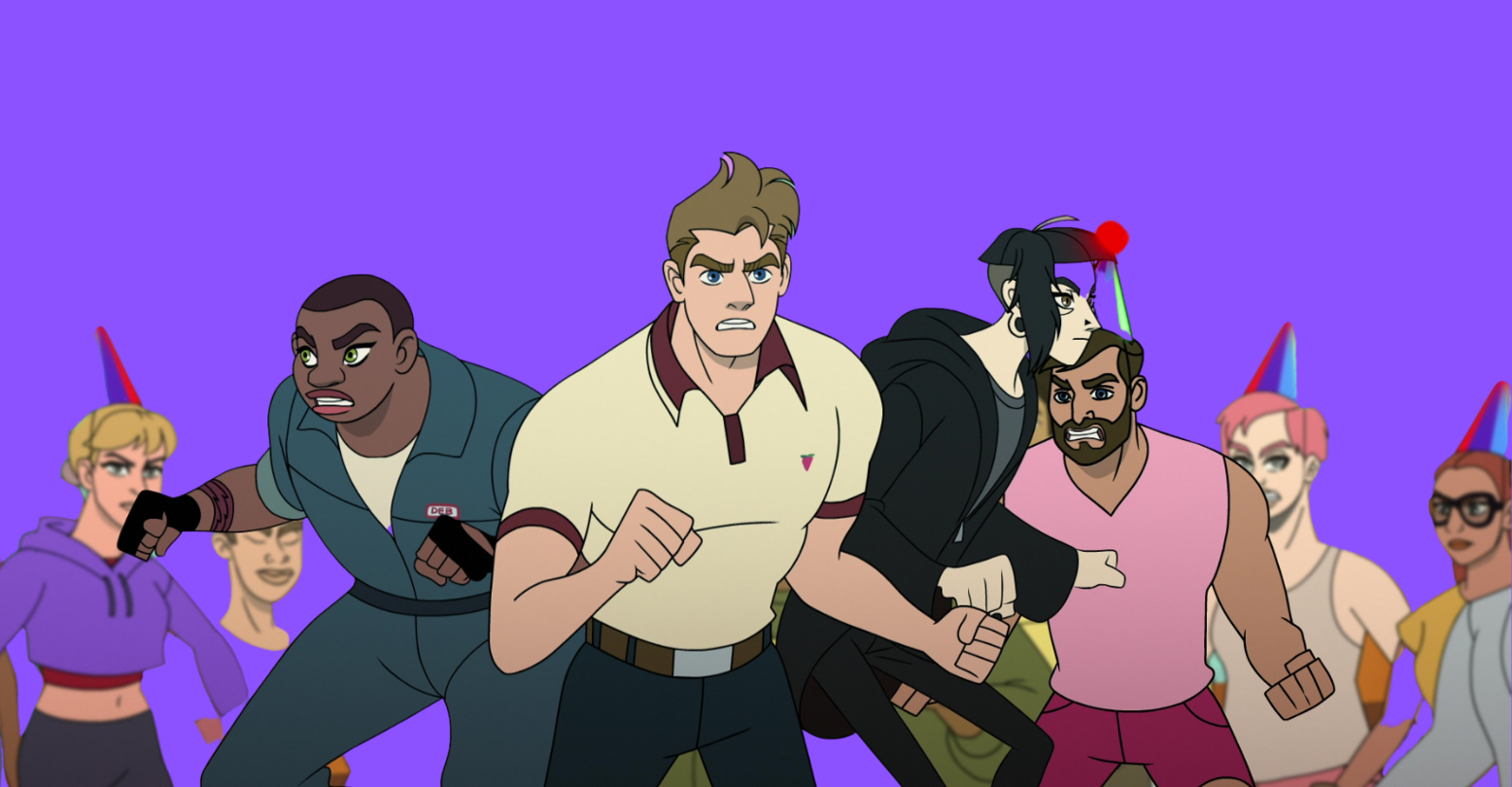 Like most people, my first encounter with Q-Force was THAT trailer.  On August 12, a perfectly average Thursday, Netflix released the reveal trailer for its new animated gay espionage series, and the reaction was swift and merciless. There was little to indicate that the show was anything but an excuse to traffic in outdated and overly broad stereotypes about the queer community, but my own sense of morbid curiosity (and a TikTok feed filled with praise) convinced me to reconsider.

I binged the show in a brisk two sittings and shrugged. The show isn’t necessarily bad in a traditional sense, but it definitely isn’t good either. Shows like this are usually consumed, digested quickly, and discarded; only revisited on listicles about “10 Queer Shows You Probably Forgot About.” Yet for me, Q-Force was more like that one Tequila shot that sends you to the curb and has you asking yourself why you even took it. The show gave me a nasty hangover, and I needed to figure out why. Only through weeks of processing did I find my answer.

Q-Force is a show desperately running from its very interesting and obvious premise in the name of appeasing a very select audience, and for that, it suffers. From trans people circumventing big pharma to get hormones to the long-documented practice of undercover cops “playing gay” to entrap men for sex acts, espionage and living as a queer person have more than a significant overlap. Something as simple as ‘gay spies’ provides the opportunity to explore this very real and very interesting parallel via thematic coding. The show doesn’t really have a clear thesis, but the closest thing it gets to is an exploration of passing. After all, espionage and passing are similar concepts: Both rely on outward appearance masking internal desire and “hiding one’s true intentions.”

Q-Force was more like that one Tequila shot that sends you to the curb and has you asking yourself why you even took it.

One of the main criticisms leveled at the show was its overreliance on archetypes based around the sexualities of its leads, and how they line up with a traditional squad setup. Twink is an effete gay drag queen and acrobat. Deb is a strong lesbian mechanic. Stat is a transfemme (allegedly) hacker. There isn’t necessarily a problem with this type of storytelling, but only when time is devoted to actually providing characterization beyond first appearances. Q-Force does not do this. Instead, what little characterization the show provides is given to Mary, the cis gay ‘leader’ of the team. Mary gets to be a fully-fledged character with guilt and doubt and internal strife. In fact, the main conflict of the show rests on Mary trying to gain acceptance from the heterosexual higher-ups in the Intelligence Agency.

The show prioritizes the experiences of cis gay men over that of queer communities where issues like passing carry far more weight and potential harm.

The show prioritizes the experiences of cis gay men over that of queer communities where issues like passing carry far more weight and potential harm. Take the B-plot for episode 7, where Twink, increasingly frustrated at his mistreatment by token toxic straight Buck, decides to play a prank by dressing up as his girlfriend and going on a date. A plot like this carries an immense amount of potential socio-political commentary about homophobia, transphobia, straight male ego, and how being stealth may not protect you from violence. But instead of speaking to any of these issues, the episode instead finds humor in how straight men are immature and ends with Buck reluctantly accepting an apology from Twink. Not merely do they prioritize the cis gay experience, the writers seem scared to even acknowledge that other queer people exist.

Take, for example, the character of Stat. She is a goth anarchist hacker who loves energy drinks, is voiced by Patti Harrison, and looks almost exactly like one of my exes. By all measures, Stat is meant to be read as transfemme, but yet the term ‘trans’ is not uttered a single time in the show’s brisk runtime. The audience only knows that she’s trans because she exists as a very particular archetype of trans femininity. In fact, Stat is the only transgender person (if she’s even trans at all) who appears in Q-Force at all. There are no other transfemme people, no named transmasc or non-binary characters, and a grand total of 4 (potentially 5) named lesbian characters. Visibly queer characters like Twink, Deb, and Stat only exist as supporting characters in a story about gay male anxiety about passing in a neoliberal society.

In the end, Q-Force’s writing is stunted because it mistakes the gay male struggle with the queer one. After all, how can a show call itself ‘queer’ when its model of queerness is a 32-year-old cis gay downing his third mimosa and telling me to ‘vote blue no matter who’ at a drag brunch off of La Cienega? Queerness is far broader and requires imagination to see beyond simple identity politics. It’s a shame Q-Force lacks that vision.♦