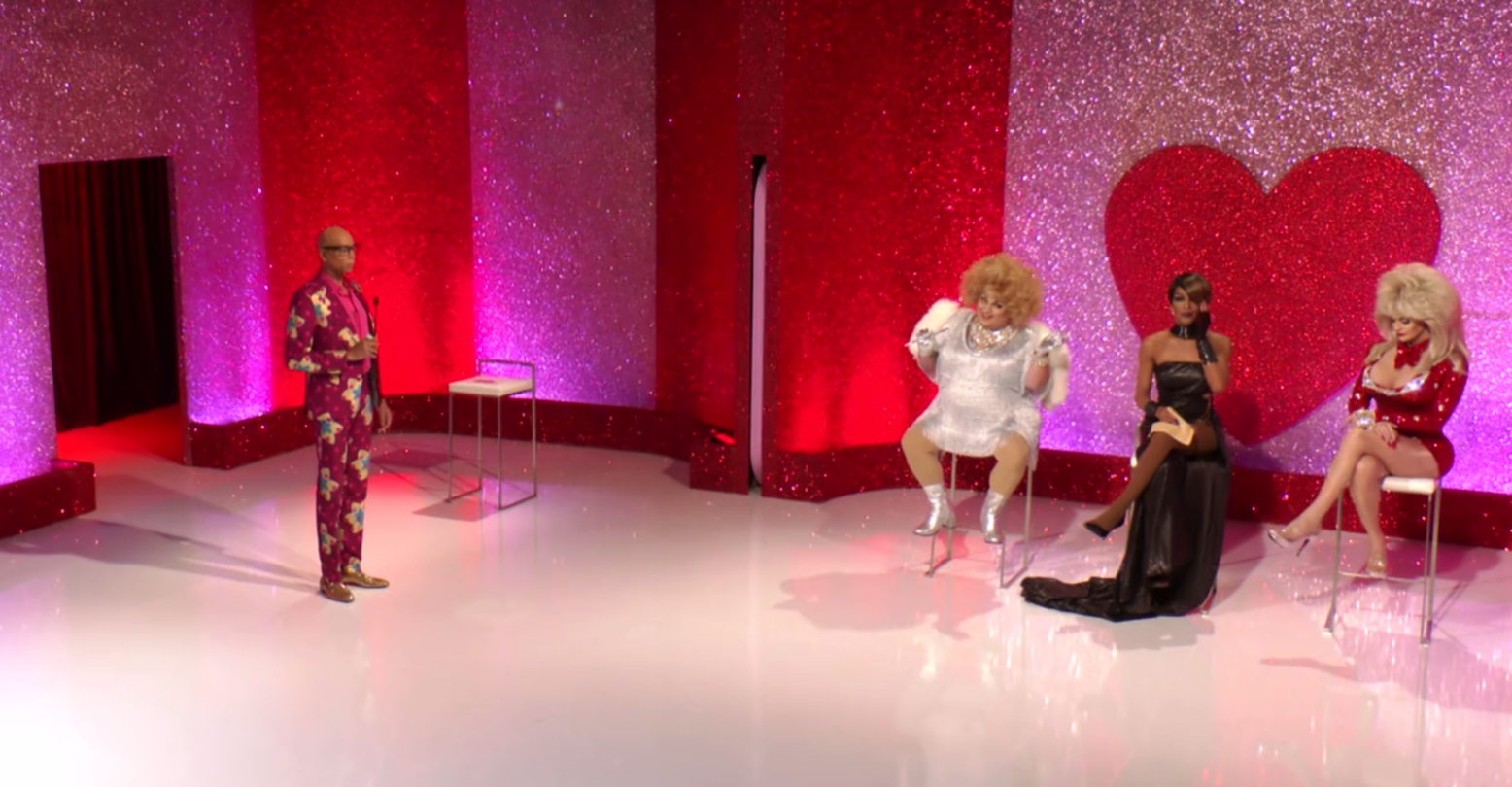 Welcome back to the INTO RuView, where we recap “RuPaul’s Drag Race” week by week. The eighth episode of All Stars 6, “Snatch Game of Love,” saw the queens competing in the show’s most famous challenge — well, the bootleg All Stars version of it. Still fun!

The girls get back to the werkroom after Jan’s twist-filled elimination. Ra’Jah praises Trinity’s performance in the challenge: “You did what needed to be done … except for put a bobby pin in.”

Indeed, Trinity’s wig loss was tragic last episode, and it means she’s now lost more lip syncs than she’s won across both of her seasons. I don’t care, she’s still an assassin in my heart.

They reflect on the vote, the closest in All Stars history. Pandora narrowly escaped elimination, thanks to Trinity, who warns her that she better be “louder than Eureka from here on out.” Pandora then thanks her in a slightly louder than normal voice. Gonna have to try harder than that, babe.

Eureka and Ginger reveal that they voted for Pandora. Ginger gives her entire explanation in the third person (“I’ve been friends with Pandora a lot longer than I’ve even known Jan…”), despite Pandora literally being one couch away. Even when the conversation is literally about her, Pandora unfortunately remains in the background.

The next day, the queens find Jan’s mirror message, which is overflowing with positivity in true Jan fashion. I’ve gotta give her credit — she was true to her brand all the way to the end, no matter how little it was working for her.

Ru comes in to announce the main challenge: at long last, we’re playing the Snatch Game! Of Love. And he announces one of the most exciting guest judges in the show’s history: Tina Knowles-Lawson. Trinity is understandably gagged out of her mind. “That’s like meeting God,” she says, “and Beyoncé’s Jesus!” She’s not wrong.

Now, this is a fascinating group of queens to play Snatch Game with. Everybody’s got something to prove:

The moral of the story: I can’t wait to see how this turns out.

The queens competed in two groups of three. First, Ginger as Phyllis Diller, Trinity as Whitney Houston and Kylie as Dolly Parton. Can I just say, Ginger and Kylie had one of the best back-and-forths in Snatch Game history?? What a redemption for Kylie, and a return to form for Ginger! They were undoubtedly the top two of the week, other group included.

I did feel bad for Trinity — with Kylie and Ginger killing it so hard, her performance looked even weaker. Ginger had more Whitney jokes than she did. At least she looked incredible.

The second group consisted of Eureka as Divine, Pandora as Kim Cattrall and Ra’Jah as La Toya Jackson. Both Eureka and Ra’Jah killed it in the makeup department, but for me, Ra’Jah was the clear standout of the group.

Ra’Jah was super smart; in the earlier walkthrough, Ru had mentioned a story about La Toya saying sushi was her favorite food, despite not liking fish or rice. Ra’Jah took that anecdote and ran with it, adapting it to jokes about exercise and cats. Now that’s a killer snatch. Just another moment for this insane makeup illusion:

It’s worth mentioning that Eureka was fully giving Divine, meaning much of what she said was uncomfortable and disrupted the flow of the game. A good impression for sure, but not a winning performance by any means. Meanwhile, Pandora was truly disappearing in the middle.

There was also a challenge subplot with returning guests Cheyenne Jackson and Fortune Feimster, but, uh, I didn’t really care about it. Next!

This challenge had clear tops and bottoms, and the girls know it. “I already knew in the back of my head this was going to be my toughest challenge,” says Trinity the next day in the werkroom. Good on her for owning it, but also, that’s not much of an excuse. You knew it was going to be hard, so you’re okay with failing? Huh.

Once again, Trinity is absolutely serving on the runway. Beyond the beautifully incorporated political message, the garment and hair are stunning, and the whole ensemble looks like it stepped straight out of a Lichtenstein. Trinity was also the only girl to paint her face like pop art, which makes the look all the better.

Cleavage in the front and the back? Yes please. On a runway oversaturated with mod silhouettes, this gown is a stunning change of pace, and Kylie, as always, is showing off her best assets while still being high fashion.

Of all the Warhol-esque “my own face over and over” looks on the runway, Pandora’s was the weakest. This just has no real creativity to it — it seems she just googled “pop art” and said, “Great, put it on a dress.”

I normally live for Ra’Jah’s looks (especially because she makes them all herself), but this was a rough spot. The boots are fierce, but they’re reused from her entrance look. Statement pieces like that should only be used once on “Drag Race.” The jacket is lovely too! The bodysuit really drags it down — the writing looks like an afterthought.

Can we discuss how much of a letdown this runway was?? A theme like pop art has a world of possibilities, but the girls only seemed to dip their toes into the movement. To see some truly fierce queer interpretations of pop art, I recommend Season 2, Episode 5 of Legendary on HBO Max, “Pop Tart.” They got the same theme and ate. it. up.

The judging this week is pretty self-explanatory. Trinity, despite having the best look, lands in the bottom with Pandora for her disappointing Snatch Game. Ginger snags the win, which I guess now makes her the frontrunner. I personally would’ve thrown this win to Kylie, both for her runway and her massive improvement, but I’m not mad at it.

Ginger finds herself in an interesting position here: get rid of Pandora, the weaker competitor, or Trinity, the biggest threat? This season has yet to have a true upset elimination like that, and it’s bound to happen at some point.

The girls vote, pretty uneventfully, except that Kylie, ONCE AGAIN, looks back at her stunning reflection before leaving the voting booth. Icon. We’ll need a compilation by the end of the season.

This week’s lip sync assassin is … Heidi N. Closet! A queen we’re sure to see competing on a future All Stars season. The lip sync is to Sheena Easton’s “Sugar Walls.” Can’t say I’ve heard this song before, can’t say I’ll ever listen to it again. But it’s an okay lip sync. Heidi’s planned wig reveal happens accidentally — a shame, because it could’ve been fierce.

Instead, Ginger wins, making her total cash earnings from lip syncs this season $50,000. Jesus. That’s half the prize pot for winning! She could go home happy at this point.

She reveals her choice: Pandora. Yeah, sorry, but the Boxx that rocks was not rocking this season. Pandora is, of course, promised a chance at the “game within a game,” IF IT’S EVER GOING TO ACTUALLY HAPPEN. Damn. Maybe the eliminated queens are just off playing checkers somewhere, and they decided it wasn’t worth airing.

Next week is a character design challenge! Ra’Jah won the season’s first design challenge, so can she pull out another victory? Or maybe Eureka will finally come through? Will we get a legendary sewing challenge look? I’m on pins and needles.