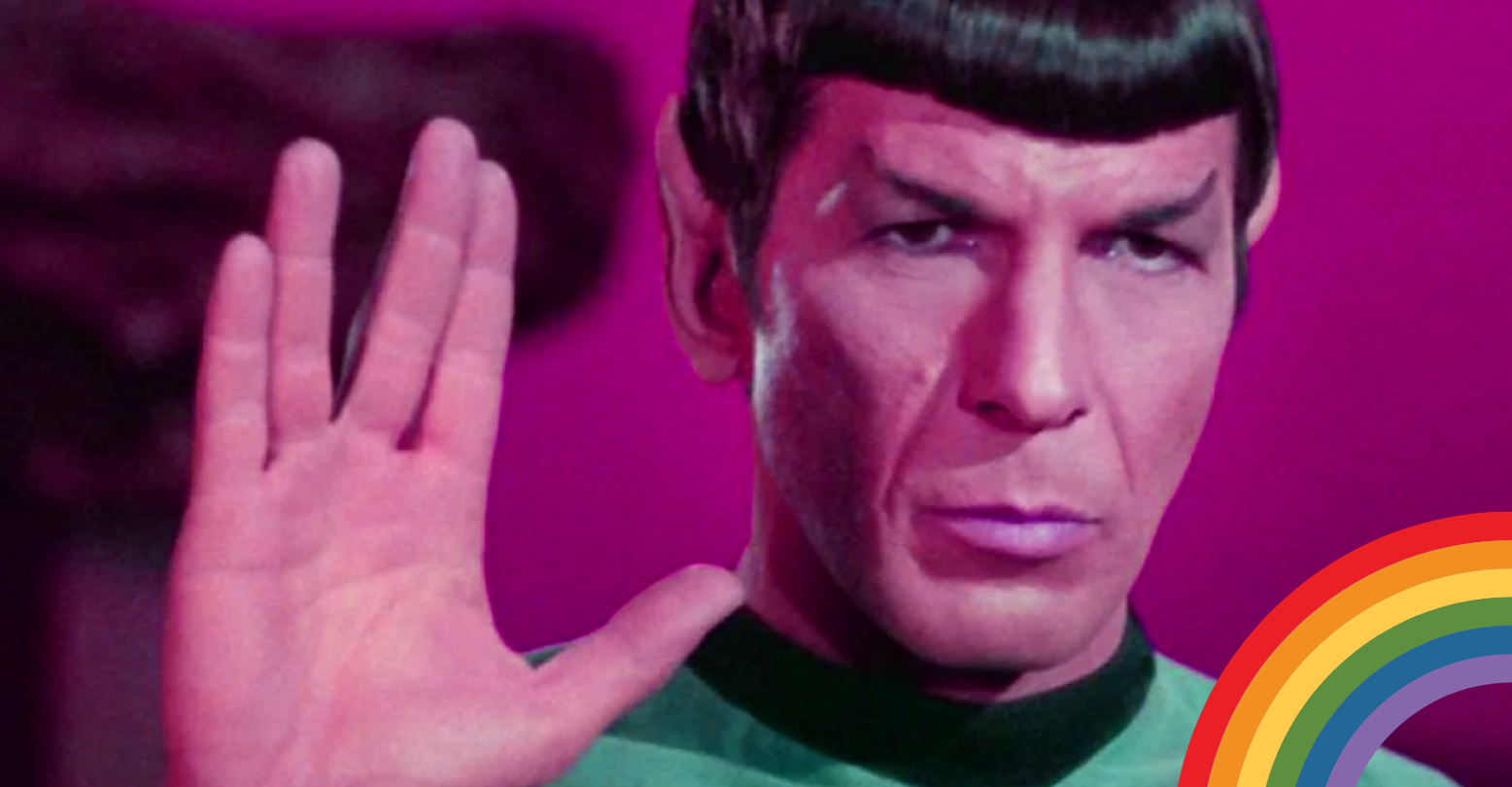 Star Trek: The Original Series turns fifty-five years old this week, celebrating more than half a century of revolutionary storytelling, representation, and impact on the media landscape. When Star Trek premiered in 1966, it had such little critical acclaim and creator-audience distance that fans of the show could literally call the studio to ask Gene Roddenbury questions about episode details or alien cultures. One lifetime fan, called “Dee” in a posthumous 2018 tribute, recalled that “when she lived in Los Angeles in the ’70s, [she could] just call up Jimmy Doohan, the actor who played Engineer Montgomery Scott, and invite him over for lasagna.” Compare that to today’s Star Trek production value and culture, where fans can pay hundreds or even thousands of dollars to interact with the cast and crew, or hang out on Twitter hoping for engagement from the official account.

The shift in cultural perception of Star Trek from a niche show that was nearly canceled in its second season to a franchise with more than $2 billion in box office revenue makes for an impressive legacy. But for queer fans—not just of Star Trek, but of, at this point, just about anything you can think of—Star Trek has made an even greater splash on the landscape of fan culture. In fact, from shipping terminology to the building blocks of transformative fandom, the Star Trek fandom is one of the most significant origin points of queer fandom as we know it today.

While the digital fan spaces of today would have been a distant dream to Star Trek fans in the sixties and seventies, today’s fandom owes its roots to the (mostly-female) Star Trek fans who saw the potential in the show from day one

If you ask ten different fans how they define and interact with fandom, you might get twenty different answers. But there are some commonalities across fandom types and structures: fandom is about finding commonality and meaning through a shared point of reference. There is actually a somewhat “official” definition: Fanlore, the meta-depository of all things fan-related, defines it as “a community of fans, participating in [fan activity] and interacting in some way, whether through discussions or creative works.” Broad and useful!

While the digital fan spaces of today would have been a distant dream to Star Trek fans in the sixties and seventies, today’s fandom owes its roots to the (mostly-female) Star Trek fans who saw the potential in the show—and in its characters and relationships—from day one. “The modern understanding of queerness and fandom, in all its myriad forms and complexities, owes the lion’s share of thanks to James T. Kirk and Spock,” Vrai Kaiser wrote for The Mary Sue in 2015. “They were the genesis of the phrase ‘slash fiction’ [,] were featured in zines that formed the basis of modern communal fanfiction and fanart sharing, and were some of the only intimately close male characters not to get paired off with paper-thin female love interests out of panic.”

The “zines” Kaiser references were lovingly mimeographed by fans and then sent through the mail. While many of them explored slash pairings, including Kirk/Spock, and even included explicit slash, these were mostly done through underground networks until the 1976 publication of Analog: The Epilog to Orion, a fifty-page Kirk/Spock-specific zine that included twelve pages of fanfiction, twenty-one pages of poetry, and multiple line drawings. The price was $5, including postage. Gerry Downes, a well-known fan and the author of the work, described it as “a celebration.”

“[Captain Kirk and Spock] were some of the only intimately close male characters not to get paired off with paper-thin female love interests out of panic.”

Fandom has never existed in a vacuum, and for the rapidly-popularizing Star Trek fandom in the seventies, this was no exception. The Save Our Children movement, a reactionary response to the Stonewall Riots in 1969, gained considerable political clout in the late seventies, claiming that queer people—particularly gay men—were out to “recruit children” (the catchphrase that spawned about a billion tongue-in-cheek “gay agenda” products for queers with an ironic sense of humor). Fearing the legitimate social consequences of association with creating and distributing (sometimes explicit) queer content, many slash writers left fandom altogether, or became increasingly anonymous.

But others—like Dee, introduced above—took the opposite approach: they “joined the counter-movement, advocating for gay rights as they continued to pursue their fanworks. Many of these people—mostly women—knew and believed that gay relationships were valid. After all, they’d been writing about one for years.”

Star Trek hit the big screen in 1979 with the (oft-maligned) Star Trek: The Motion Picture. The film is credited, in some ways, with the first major split in the fandom, between the “shippers” and the “purists.” Anyone who’s spent time in any fandom is familiar with this kind of schism, but unlike the digital fandom space we live in today, fandom in the eighties relied on networking and person-to-person connections. In the eighties, slash fans were discouraged from participating in conventions, and even non-explicit slash zines were banned from dealer rooms and quite literally sold under the table–a departure from the conventions like SeKWester*Con in 1977, which hosted fan panels on “Porno and Sex in Star Trek Fiction.”

But this split between the “shippers” and the “purists” is a significant one, because it laid the groundwork for the heart and soul of queer fandom: the origins of transformative, as opposed to curative, fandom. Coined by Reddit user LordByronic, the terms curative fandom and transformative fandom refer to two diverging ways of engaging with content as a fan. Curative fandom is “centered around collecting and organizing” as a fandom activity, whether that’s collecting merchandise (limited-edition Burger King glasses, anyone?) or knowledge (if you’ve ever had your “nerd cred” tested by a white guy at GameStop, congrats, you’ve experienced curative fandom!). Transformative fandom, in contrast, “involves a deep interaction with the source material [to transform it] into something else.” Creativity is at the heart of transformative fandom: it’s where you’ll find fanfiction and fanart, headcanons, and analytic manifestos. Transformative fandom is the origin point of the aptly-named Organization for Transformative Works, a nonprofit established “by fans to serve the interests of fans by providing access to and preserving the history of fanworks and fan culture in its myriad forms.”

In the eighties, slash fans were discouraged from participating in conventions, and even non-explicit slash zines were banned from dealer rooms and quite literally sold under the table at conventions.

One of the major projects of the OTW is Archive of Our Own (AO3), described by the OTW as “a noncommercial and nonprofit central hosting place for fanworks using open-source archiving software.” While controversy around AO3’s hosting policies and safety (or lack thereof) for marginalized fans come up every few months or so—some even getting mainstream coverage!—its sheer existence as an archive not subject to stakeholders or the cease-and-desist letters that once plagued smaller sites with no protection for individual creators.

All of that work, from the volunteer tag-wranglers who keep the archive’s organizational system functioning to the creators who earned the AO3 a Hugo Award in the category of “Best Related Work,” wouldn’t have been possible without the fans who started it all, sharing photocopied Kirk/Spock zines through the mail.

And it’s because of those fans that fandom, for all the in-fighting and power dynamics and problematic behaviors that plague any online or offline spaces, is still a haven not just for queer fans searching for representation and a creative outlet, but for fans who are still figuring out who they are and how they identify to explore and learn. A 2018 study in the Journal of LGBTQ Youth found that queer youth and young adults aged 14-29 hit “established identity milestones” (such as self-identifying as part of the queer community or coming out to friends or family members) younger than their non-fandom peers, and also “identified with more complexity, using a variety of more non-traditional sexual identity and gender-identity labels.” Fandom provides access not just to information and conversation often lacking in mainstream education, but also to other fans across the generational spectrum. Fandom elders offer not just a source of fan history and continuity, but connections to intergenerational conversations about queer media and media analysis. Even outside of online spaces, fandom and fandom elders can be a safe space: Alissa Smith, who wrote the tribute to Dee in 2018, recalled that she “she took the time to speak to young queer kids who have been rejected by their families (proud to be their honorary “Fandom Grandma”), and offered a listening ear to folks who were simply lonely.” For queer fans with few or no safe adults to come out to in their “real” lives, the presence of a “fandom family” can be a life-saving gift.

Fandom is constantly evolving. From the early days of mail-shared zines to long-lost communities on LiveJournal to the emerging fan spaces on TikTok and Instagram, queer fan culture is dynamic, migrating, and always in flux. Always seeking–if you’ll forgive the cliche–to boldly go in new directions, to find new ways of connecting and creating and transforming, looking for the opportunities for new stories, and for new ways for queer fans to see themselves in the old ones. For fifty-five years, Star Trek fans like Dee have made that possible. And with new Star Trek content continuing to provide fans with new characters and representation and adventures, that’s likely to continue for years to come.

“You are the ones shaping the traditions of fandom,” Dee wrote in an open letter on her Tumblr in 2017, shortly before her death early the following year. “You have inherited the kingdom. Bless you for keeping it vibrant, growing, alive. In fifty years, you will be the ones who are remembered for molding it and handing it down to the future. It probably doesn’t feel like it now, but you are making history.”♦