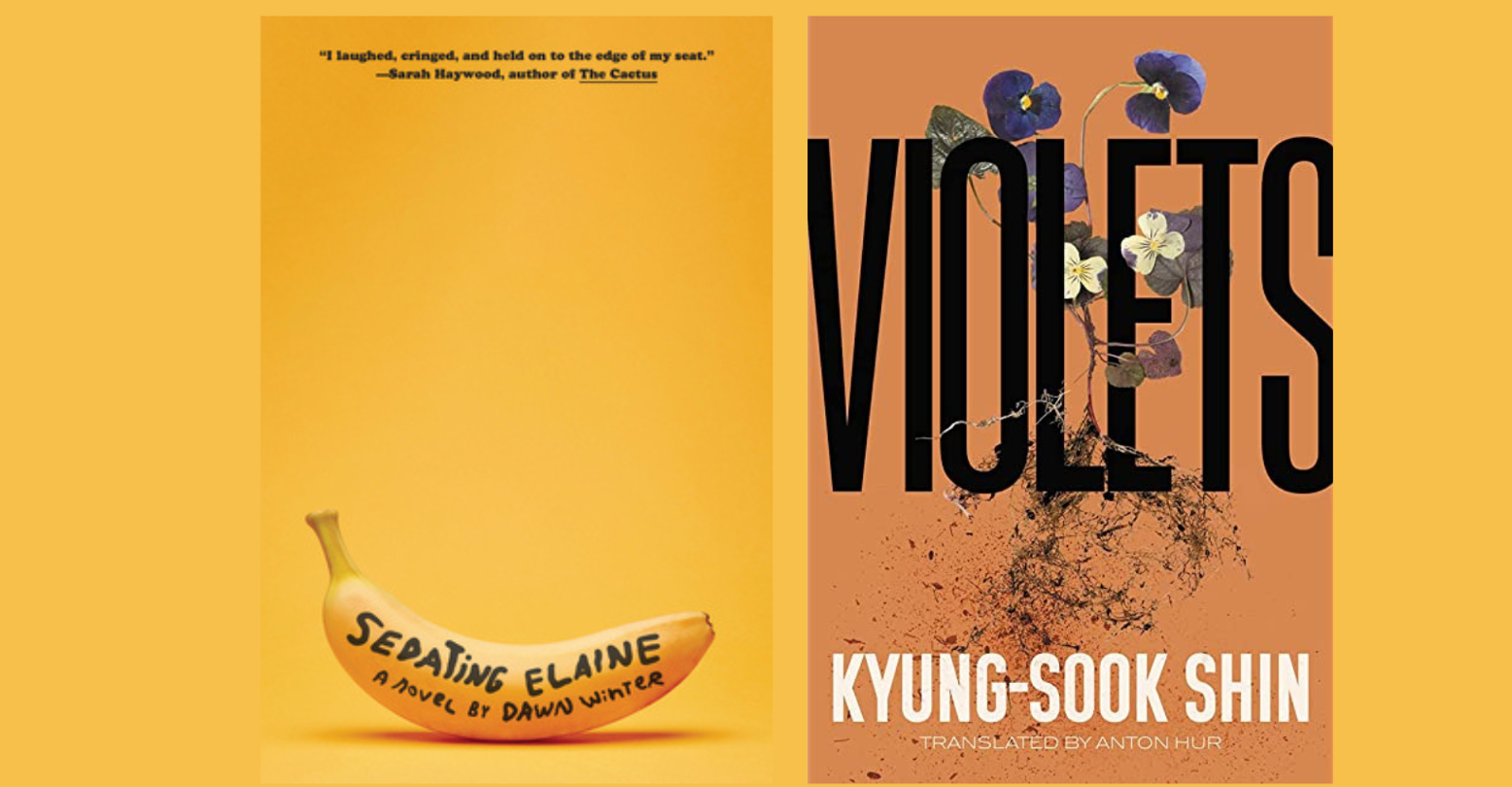 When motherless girls grow up to be lesbians…

That’s not a spoiler alert, just the most reductive link between Kyung-sook Shin’s Violets (translated by Anton Hur) and Dawn Winter’s Sedating Elaine. When #bennyboosbookclub selections appear on my desk, or in my earbuds, I don’t seek out trends. I just notice them. In these two books, once the protagonists become adults, they yearn. A lot. It’s all very gay. Eventually, they both fall apart. But is there a pipeline between the missing and the mess?

Of the four books I read for this column, Violets is the least didactic. But #bennyboosbookclub is not a place where we pit books against each other. Nor is it a celebration of all the narrative representation happening or not yet happening. Rather, this month’s selections are a calibration of dials—from didactic to evasive, from academic to poetic, from dumpster fire to disaster.

Originally published in 2001, Violets introduces its protagonist San as a child being rejected by her best friend Namae. They’re kids. The narrative skips ahead to San as a young woman newly arrived to a big city and wanting work. The loss of both her mother and childhood friend reveals its after aftershocks to the readers with gentle inevitability. The world around her glimmers in an eerily violent way: “Where has this sunlight been hiding? A shard of it falls across her scratched skin and quivers there in pieces.” San seems to stumble passively into a job flower shop and then into sharing her apartment with her new coworker Su-ae, whose vitality and influence reveal further echoes of Namae.

In these two books, once the protagonists become adults, they yearn. A lot. It’s all very gay.

Can one ever run away from such grief? San’s interiority reads as blank—perhaps depressed— and her outward presence distracted. Shin writes: “An endless space appears before her, like she’s slipping into an abyss.” In some respects, San is a prototypical woman protagonist of Jess Bergman’s denuded realism—one of my favorite premises, honestly.

Though I’m being glib, there’s nothing funny about being a woman unraveling. I can’t say the story is a pleasure to read but rather, a gut-shifting catharsis, a harkening back to the times I’ve fallen apart in my early- to mid-twenties. Shin attends to every sensation, every image with excruciating tenderness and renders it cinematic. Violets doesn’t aestheticize the trajectory for voyeuristic amusement but for me at least, it provides an invitation to appreciate my own fragility. Not in the millennial snowflake sense: rather my awareness that, even as I trudge along, putting a front of impermeability to plod through my little work tasks and to-do’s, I am and must remain a person. I am as pliant as I must be strong—especially when patriarchal capitalism would much rather I be merely object.

One could read Violets through lenses of trauma theory or psychoanalysis. But that would be such boring, low-hanging fruit. There’s plenty of dissociation, triggers and flashbacks, and attachment issues though thankfully, none of these episodes are ascribed as such. It’s just happening. See instead Stephanie Foo’s What My Bones Know, a memoir recounting with comforting linearity the non-linearity of Foo’s reckoning with C-PTSD and her subsequent unravelings.

Bones is most riveting when Foo recounts how she moved through cycles of calm understanding and complete upheaval. It’s exhausting work to mine the gradations and organize them into a chronology, but so validating to read. It’s harder still to cull a neat thesis from this work: Foo’s attempt employs a rather liberal use of “we” when gesturing at a pan-Southeast-ish Asian diasporic migrant/refugee trauma narrative. Plus,her gender essentialist comparison of how (cis-)men and (cis-)women process trauma differently were disappointing lapses in an otherwise richly sensitive account.

One could read Violets through lenses of trauma theory or psychoanalysis. But that would be such boring, low-hanging fruit.

Violets takes a different approach to reaching beyond the particularities of San’s story. As the narrative progresses, the authorial distance gradually widens, not towards a bland universalism but an ever-oblique portrait of San. The disorientating proximity and remove make the messiness of her unraveling transition between sharp and blurry soft at unexpected junctures. I regret that I predicted the climactic ending pretty early on, but the trope is delivered with conviction.

Like in Violets, the protagonist of Sedating Elaine owes someone more money than she has. Still heartbroken over an abrupt rejection by her most recent girlfriend Adrienne, Frances decides to invite her new overly-eager rebound girlfriend and first-time lesbian Elaine to move in and use the deposit to pay off her debt. No sedatives are required for the sweetly naïve Elaine to leap into Frances’ reluctant arms: it’s Frances who can’t bear the intimacy of sharing an apartment with Elaine. It’s not just Elaine’s overbearing energy, but the way her enthusiasm echoes her own mother’s overbearing love. Frances doesn’t recognize her discomfort as such, but the narrative makes her fears easy enough to identify. Frances does recognize all of Elaine’s things as material evidence of her class privilege. It’s distressing. And without a psychoanalytic framework of her own, Frances’ only option is to sedate her girlfriend for a few days so she can collect her deposit, dump Elaine upon revival, and finally have some peace.

Many a U-haul stereotype is available here, and yet, few are called out as such.

Winter presents a romp-y premise as the vehicle through which a lesbian must confront her abandonment issues and stop being a mess. I only felt slightly told on. Frances’ and Elaine’s backstories unfold as neat lesbian origin stories, though, for better or worse, not much is fuss is made over them being women-loving women. Many a U-haul stereotype is available here, and yet, few are called out as such. The fact of Frances being Elaine’s first relationship with a woman is glossed over pretty quickly, while a number of pages are given to one of their traumatic childhood memories. I imagine this backstory’s allotment was meant to serve some function in plot and/or character development. I just had trouble locating either.

I resist having to explain marginalized experiences to people in life and in writing. But psychoanalytic connections made too neat can be just as stifling and unsatisfying. The contrast between Frances’ and Elaine’s mommy issues are almost caricaturishly neat. The doctor-cum-therapist’s advice could be dismissed as rather trite, even if I didn’t mind reading some of his words of wisdom, you know, to pass on to a friend. But of course, being in such desperate need of a mommy and money is stressful, mentally.

I recently listened to Zaina Arafat’s You Exist Too Much, whose protagonist is perpetually contending with the weight of her identities—Palestinian, bisexual, love addict, etc.—as she unravels again and again. Yes, one such moment is prompted by being dumped by a fed-up girlfriend. Oops! But unlike Sedating Elaine’s Frances, a conventionally attractive white woman, Arafat’s main character can’t just be. She has culture to attend to.

Whiteness makes room for much erasure. By refusing to give much significance to how queerness complicates Frances’ and Elaine’s mommy issues, by refusing to re-other its characters, Sedating Elaine skips an occasion to affirm, if not justify, how the queerness of the mommy issues and class tensions may not be relatable to most people. And that’s okay; as with its also-unnamed whiteness, its representation of queerness is particular. That Joycean logic of the particular being universal falls apart a bit in this month’s #bennyboosbookclub: If What My Bones Know tries too hard to connect the two scales, Sedating Elaine siloes them and the slippages are a bit alienating.

Frances entering into a relationship with Elaine at all can be understood as an unraveling, and a queer one, if also a white one, but she didn’t have to sedate her. One can yearn a great deal without coming undone. But Francs was already unraveling and made choices that kept her on the pipeline. And yet, while her behavior is inexcusable, the British matter-of-factness of Sedating Elaine as a story pulls it off as just a story, a fable.

To draw another trendline, this month’s #bennyboosbookclub selections all center women trying to reorient themselves to violence. As books, they interrogate the usefulness of everyone’s different coping mechanisms. And even though there’s no fixed pipeline, no affective determinism, they’re all books beholden to their endings, which are often somewhat neat, even when also ambiguous.

Wouldn’t it be nice if my next undoing had no stakes and was resolved in five pages?♦