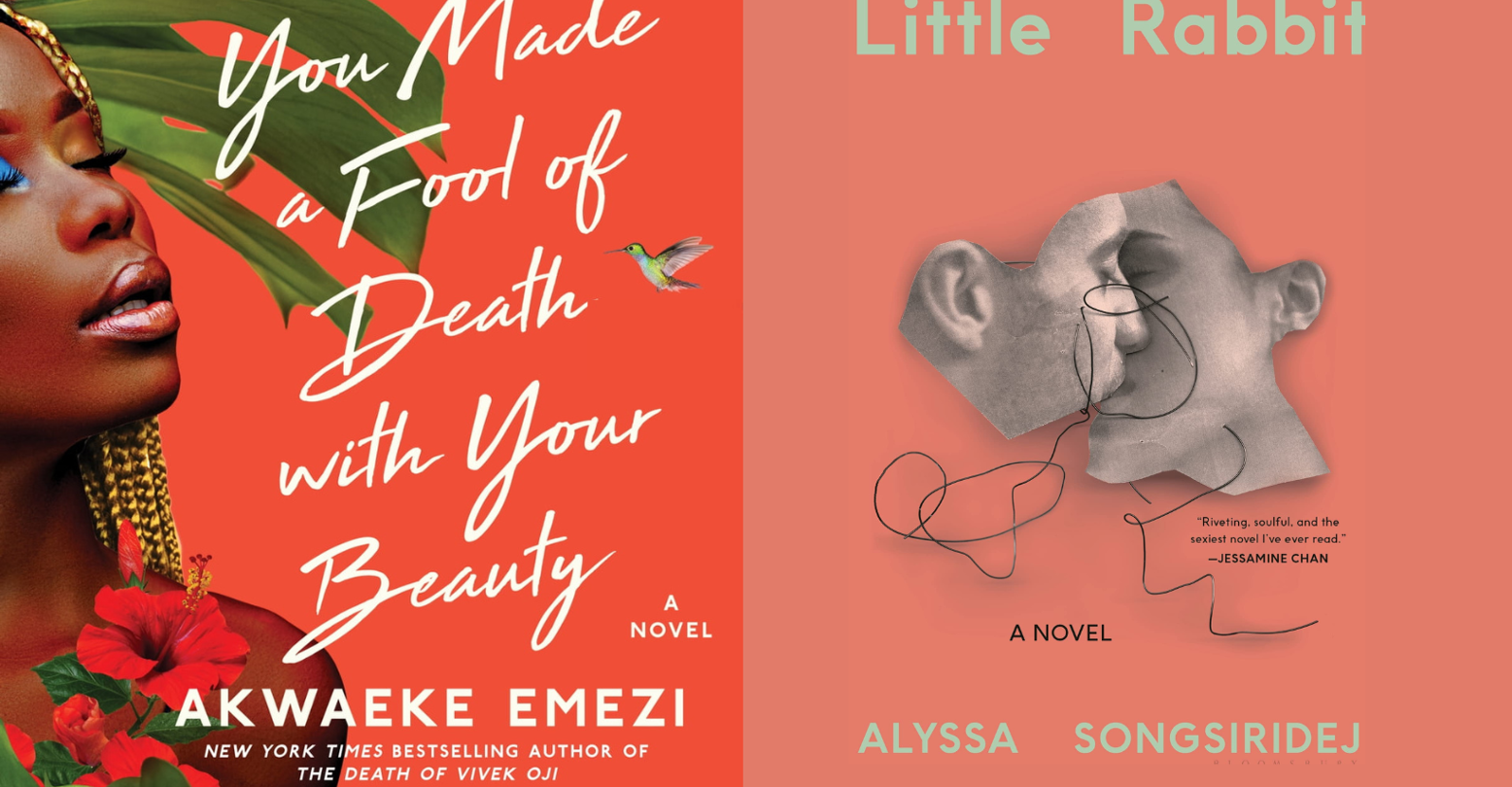 When I read the first paragraph of Alyssa Songsiridej’s Little Rabbit, my jaw dropped. It was the first of many times this book would stun me. While dmittedly, some of the surprises were esoteric—my interest in how the book addresses dance was deeply particular to time swirling on stage—much of the propulsion in this month’s #bennyboosbookclub selections derive from the awe of how people can get it together and evolve.

Little Rabbit is the eponymous pet name of protagonist C. She’s a fiction writer (I know, but it works, I promise) and after meeting a standoffish choreographer (also unnamed) at a residency, sees one of his works when his company is on tour in her local Boston. They get drinks after and, inevitably, begin an affair.

I know: a cis woman. With a cis man. That’s not gay! But wait. The lady is bi! Her roommate, Annie? Gay! What’s worse is that Annie’s also a writer. I know. Yes, there’s weird career competitiveness swirled with platonic gay girlfriend tension. It’s a squirmy delight. Also, the reader eventually learns that C is Asian.

In all three books, being adjacent to art brings people closer to themselves.

In the vein of the tender coming-of-age story Bitter in the Mouth by Monique Truong or the post-collegiate My Education by Susan Choi, the mid-stage-ish race reveal is neither cheap plot device nor overwrought identity soap box. This craft choice instead asks a reader questions about their projected assumptions—but honestly, given the author’s identity and C’s autofictional trait of being a writer, I was already there anyway. Instead, the negative capability of C and the choreographer’s names and identities feel mostly about personhood in the abstract. By emphasizing power dynamics via career status (C is emerging; the unnamed choreographer is established), Little Rabbit de-emphasizes more familiar parameters. Even in the growing tensions between C and Annie, the latter’s radical queer posturing but gold star lesbian logics are gestured at but never named. Instead, what emerges is an attention to the body, never universal but not neatly settled in any one box, either. The at times curt dialogue between characters belies a lot of tension and undergirds how desire, resentment, and shame are always coursing in Little Rabbit’s domestic comforts.

It’s when C watches the choreographer’s dancers in rehearsal and on stage that all this affect finally gets some relief. As a dancer who loves dance representation in mainstream media, I re-read every scene where my beloved art form appeared. This is camp? This is camp! As a rapturous C narrates: “Everyone seems blessed with ethereal beauty. […] I stood in wonder, an outsider briefly allowed into the realm of more beguiling spirits.” This could and should be cheesy romanticism, but Songsiridej somehow sustains the poetic tension of this multi-textured unknown that dance evokes. The balance between vaporous possibility and fleshy sensation drives C’s development as a person and artist. Does C navigate the progression of her career andher relationships with the choreographer and Annie with wilful purpose? And/or is she seduced by the power and mystery of art? Either way, truly incredible.

You Made a Fool of Death with Your Beauty (YMAFODWYB) is Akwaeke Emezi’s first romance novel,. Within the conventions of the genre, Emezi’s stylistic signatures read clearer. As with their previous works, they offer a poetic attention to the physical sensation of feeling moving through bodies. A mid-kiss murmur is described: “The word trailed like smoke from his tongue, losing itself in her mouth.” Thematically, characters work through self-doubt after loss (as with Freshwater) and the shame of forbidden love (as in The Death of Vivek Oji). Even with new premises, new characters, new genres, it’s a pleasure reading a writer who grapples with recurring questions with such bold curiosity.

Still mourning the death of her husband, the novel begins with Feyi contemplating dating again. Like C, while Feyi is a young woman and an artist (visual (grapples with her newfound attraction for an older man. But it’s not really about the man; it’s her self-narrative that’s undergoing revision and evolution. “She wanted to be someone she could recognize,” Emezi writes as Feyi celebrates a party thrown in her honor. As with Little Rabbit, her roommate Joy is a queer woman but unlike C’s Annie, Joy fully supports Feyi’s choices. And again like C, Feyi’s artmaking becomes a site where these tensions are abstracted, or given meaning more expansive than their source material.

Feyi’s artmaking becomes a site where these tensions are abstracted, or given meaning more expansive than their source material.

Also as with C, the economics and social politics around distributing Feyi’s art are a source of contention, subjects Emezi explores in their epistolary memoir Dear Senthuran. I won’t reveal any twists in YMAFODWYB, but the misogyny and ageism of onlookers provide unsurprising constraints to Feyi’s entanglements of love and work. She knows what she’s making, but who would still buy if they knew of her unfolding romance? Can she access new patrons to secure her future without losing that self she can recognize?

The protagonist of Sarah Thankam Mathews’ All This Could Be Different (ATCBD) doesn’t have any artistic practice to speak of. She does not have the time. Sneha is a new college grad in the mid-2010s and an immigrant in the United States. She relocates to Milwaukee to become… a consultant. Sigh. Same bestie, same. Or, as Mathews’ characters frequently address each other, same, “my good dude.”

Sneha contends with material precarity not faced by C or Feyi. It’s hard to fight back against late pay and an abusive landlord when her access to statehood is provisional. Harder still is it to work through her trust issues as she begins dating women she meets online. Nevertheless, she… JK!

What’s compelling about reading these books together is not ranking oppression because ma’am, it’s 2022. Besides grappling with grief of her own (Mathews’ unfolding of Sneha’s trauma plots reads so smooth!), she’s also holding space for the crises of new and old friends. From a friend who’s struggling to set boundaries to an almost-lover turned they/them-bestie who dreams of a communal home, the Pink House, ATCBD meanders across an ensemble cast.

Even as I have somehow found luck in continuing my own career as a dancer, a pandemic-battered economy has made it hard to remember what it is that I’ve been doing for so much of my adult life.

In that way, ATCBD is like a diasporic Victorian millennial novel where young adults’ personal development and navigating the post-2008 financial collapse are obviously inextricable. For a novel so expansive so scope, ATCBD may not take up the pages needed to fully tend to all its secondary characters and rich themes. Maybe the relative sparseness could be read another away. The denotative text of Sneha’s text message exchanges and late-night drive conversations does convey deep care. And yet, as she’s offering the best advice she can, Sneha tries to manage her own impending ruin privately as her invoices go unpaid. Unsurprisingly, this secrecy is unsustainable on multiple levels.

Like C, Sneha finds inspiration in a lover who’s a dancer and choreographer. Reading these spectators’ accounts of what dance is and could be was so affirming. Even as I have somehow found luck in continuing my own career as a dancer, a pandemic-battered economy has made it hard to remember what it is that I’ve been doing for so much of my adult life.

One could fault both Little Rabbit and ATCBD for imbuing dance with a rareified mysticism that feels counter to all the very human constraints of making dance in 21st century United States. But both Songsiridej and Mathews evoke a reverence for the material precarity of a dancer’s work that isn’t mutually exclusive from their awe for dance’s otherworldly powers. Even Feyi’s story, the most lavishly fantastical of the three, shows the power of happenstance in seeing art that unsettles. In all three books, being adjacent to art brings people closer to themselves.

C, Feyi, and Sneha all contend with how intimacy—platonic and romantic—shapes them as individuals and artists. While they have to get by in the market economy to have the resources to feel ease and peace, the heart of these protagonists’ “happily ever after” isn’t material wealth. These are three bildungsromans (and also, two künstlerromans) concerned centrally with how someone becomes a self, a subject whole and content with how they are in the world. Reading these three pre-/non-pandemic novels amidst this summer of BA. 5 and monkeypox and loss of abortion rights and anti-trans laws and recession and global heatwaves and everything else assaulting us right now?