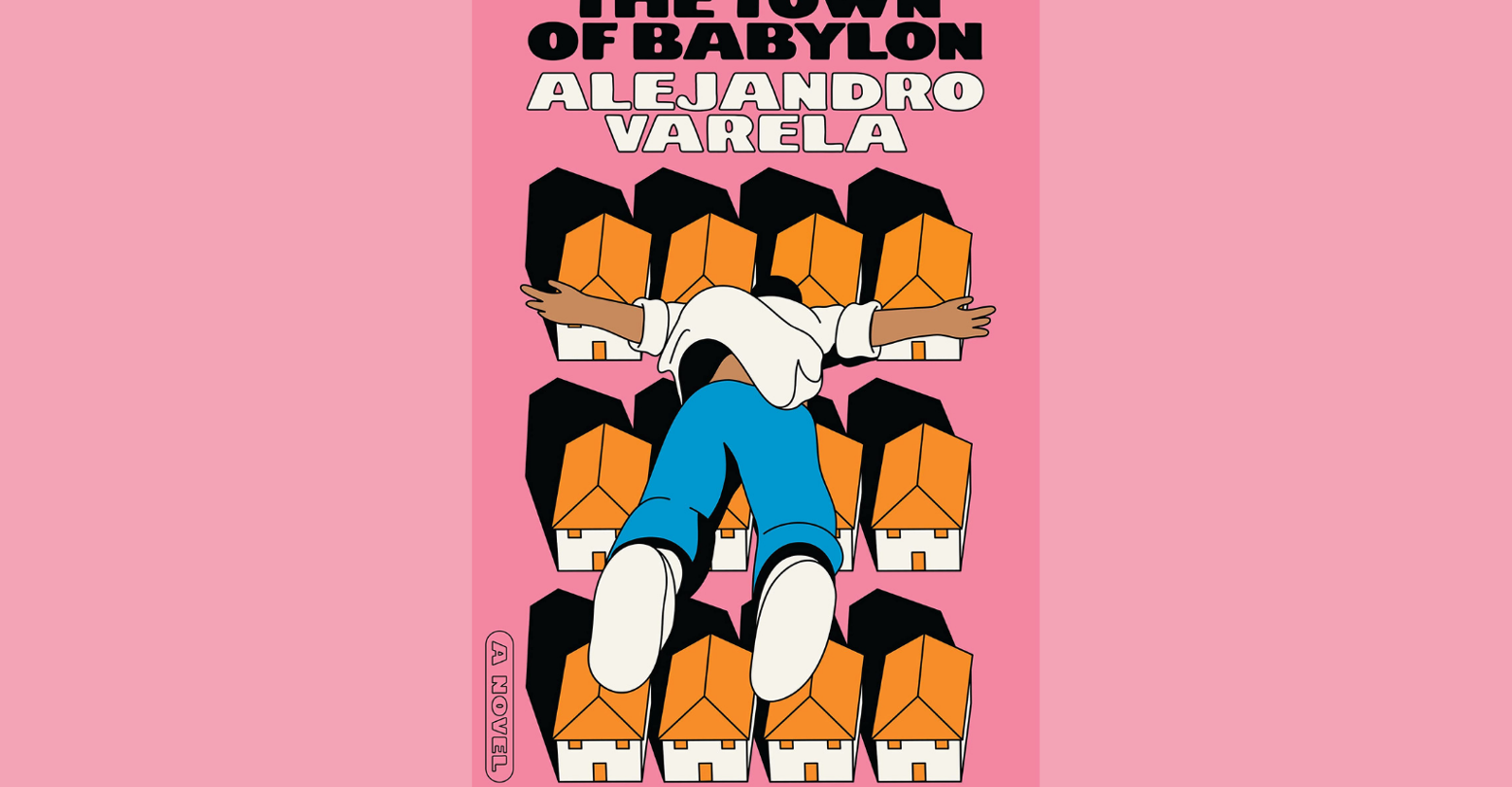 On the opening page of Alejandro Varela’s debut novel The Town of Babylon, the protagonist Andrés identifies the moment his intuition told him to turn the other way, to resist the temptation toward mess. Of course, he ignores his own judgment and goes anyway. Intrigued, I turn the page.

Andrés tells the reader of his aspirations to not be “defensively prejudiced—certainly not haughty” and yet it’s his judginess that sustains much of the book’s early momentum. He’s back in town to help take care of his ailing father: the messy event he’s tempted into attending is a 20th high school reunion. There he searches for his first love Jeremy and old best friend Simone and asks after an old bully.

The novel spans a week of hospital visits with his father and old friend as well as run-ins with his classmates on errands he insists on running on foot. Varela alternates Andrés’ first-person narration with third-person flashbacks of how the previous generation came to live in this unnamed (save for the title—though look out for the land acknowledgement) East coast suburb. From his parents’ arrival to the U.S. (his mother is from El Salvador, his father from Colombia) to Simone’s parents finding a home where they can finally stretch out, Andrés’ close ones seem to have found the town reluctantly. They’re settling here, in several senses of the word and, like me, Andrés is aware of many the meanings of many words.

When he arrives at the reunion hosted in what sounds like the most suburban of Italian restaurant ballrooms, I see—through him—all the ways his old classmates have aged but stayed the same or, more often than not, regressed. I read as he goes against his own self-narrative by disdaining many of the people he makes small talk with. I read as he hides the disdain with apparent effortlessness.

As Andrés judges his classmates, I found myself judging him, and counting the ways I felt myself not only more emotionally intelligent but more radical than him.

Andrés is not like his classmates: He’s left town, found economic mobility as a public health professor, and is now married. The last part’s only noteworthy because he’s gay. As I mentioned in my essay on Anthony Veasna So’s Afterparties, the conflation of his class mobility with his queer actualization is a fraught one, and Andrés is the kind of character who reflects on that fraughtness. Neurotically—and unsurprisingly—he redirects his disdain onto this dissonance. Is Andrés a role model in self-criticism?

In the meantime, what a discomforting delight it is to take in judgments of his classmate’s bodies and politics. Through his gaze, I eye the young bartender with a glimmer of wistful horniness. Through his mind, I calculate the long-term risks and liabilities of dietary, alcohol, and drug consumption. To Andrés, the most vital signifier of an old classmate’s politics is which presidential candidate they voted for in 2016.

I found myself wishing Andrés would go deeper and further than electoral politics. As Andrés judges his classmates, I found myself judging him, and counting the ways I felt myself not only more emotionally intelligent but more radical than him. Embarrassing. Then I remembered my own suburban adolescence. The classmates I haven’t seen in over a decade would probably require a similarly reductive framework to re-meet: pro- or anti-Trump?

While understanding the distinction when he privately corrects a classmate’s grammar (“I consider asking if she means alumnus”), I’m also wondering, “Yes, but why?” Andrés’ interiority unfolds as if he knows he’s preaching to the choir, which could make his verbal communication seem passive-aggressive. But us queer folks have earned the right to judgethe sad lives of straight people, haven’t we? As a so-called cultural critic, I could professionally roll my eyes at Andrés’ recounting of dehumanizing statistics that give evidence as to capitalism’s evils. I could deride many of his erudite pretensions as pointless to his situation. Aren’t the two genders queer utopia and queer negativity? Isn’t snark a crucial strain of queer humor? Yes, but why? To what end?

Taken together, Babylon’s distinct and intertwining narrative voices justify the rich and pointed cultural critique of the American suburb that could otherwise be merely didactic.

As I read on, Andrés deftly illustrates that full circle pipeline between lefty populist values and right-wing pro-fascism. He doesn’t condescend as to “empathize” with anyone. But when the story switches to Babylon’s third-person narrator, the reader is presented with almost sociological case studies of how everyone got to where they are. Yet, this authorial voice manages to bridge the at-times clinical distance Andrés uses as a defense mechanism and offers instead a warmer emotional register.

And even here, these seemingly deliberate, pat tracings of intergenerational lineage don’t serve to pass judgment or provoke empathy. (If my anti-empathy stance makes me sound cold, just know that I’m  a Pisces recovering from pushover tendencies!) Rather, there’s a fatalistic quality in which these small decisions (grossly constrained by racial capitalism as they are) devolve into family-altering cruxes. These backstories read like evocative portraits of Lauren Berlant’s theory of slow death. One such chapter is titled “Late-Stage Capitalism.” But it’s the impassivity of hindsight with which Varela writes these smaller stories that make them so effective. His precise pacing of those pivotal moments make for storytelling both riveting and poignant.

Taken together, Babylon’s distinct and intertwining narrative voices justify the rich and pointed cultural critique of the American suburb that could otherwise be merely didactic. On an errand to pick up bagels, Andrés muses: “As far as I can tell, the suburbs are where people go to preserve their ignorance, in service of a delusion they’ve mistaken for a dream.” And as the book’ excoriations unfurl, Andrés interrogates their very futility.

When reuniting with his high school best friend Simone, a Black woman, or reflecting on meeting his Afro-Latinx husband’s family, Andrés depicts that embarrassingly self-flagellating self-consciousness that many of us who occupy neither a white nor Black racial position carry. He’s neurotically anxious about correcting Simone for a crass joke and contemplates the racial dynamics of doing so from every angle he can fathom. He acknowledges his own condescension in withholding his forthrightness.

Elsewhere, when he does speak, Varela makes visible even in Andrés’ small comments why Simone might reasonably withhold trust from him. But we’re reading his perspective—is that just his fear  that she’s withdrawing from him, or is she actually passing wordless judgment? His education and conditioned self-awareness can read like an excuse or an annoying performance. It’s an endless spiral that’s not unfamiliar and often discomforting. It’s almost as if knowing about microaggressions and racial bias isn’t enough!

What eases these newly-resurfaced tensions and awkward exchanges is not Andrés’ knowledge of art or history. Rather, it’s his commitment to his own thought process. It’s never referred to as a superiority complex, because perhaps it’s all Andrés has left. He’s tired. Once he leaves the high school reunion, his predominant tone is not snobbery but weariness. But seeing Andrés sort through his life’s messes—some of his own choosing‚ and find patience and acceptance was what made reading The Town of Babylon so relentlessly compelling. Sorry Lee Edelman, but sometimes adult queer culture is also embarrassing childishness. I too would like to grow up someday!♦