The conceit for Paul Oremland’s documentary 100 Men seems simple and provocative. The Kiwi filmmaker set out to run down the most memorable sexual encounters he’d experienced over his life. From furtive and illicit teenage run-ins in New Zealand to bathhouse meetups in London and everything in between. Rounding them down to one hundred may have been a challenge“the full list, I’m afraid, has a few more than a hundred men,” he told INTObut not quite as daunting as tracking some of them down to collectively help flesh out Oremland’s sexual history into an even more ambitious account of queer history travelogue.

Originally, the Like It Is director didn’t envision making this latest project so autobiographical. In fact, he first began doing several of the interviews that ended up in 100 Men as research for other documentaries he hoped to make. But once the New Zealand Film Commission heard of his still-taking-shape project, they suggested he put himself at the center of it all.

“It was the only way it was really going to work,” he shared. “I realized that just a list, it would’ve just become repetitive if it had been just literally a countdown. I realized the Film Commission was right and I had to own this, fess up, and just try and make more of the narrative of it. It was quite hard. It became more personal, but it was the only way it was going to work.” 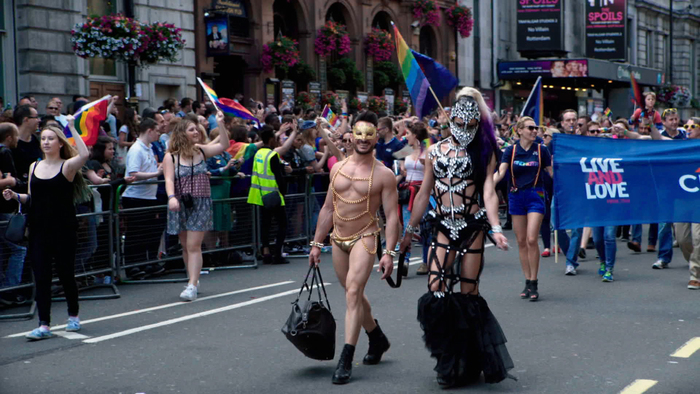 That support pushed Oremland to structure what had until then merely been an ever-growing list of his past sexual exploits into a larger narrative. What emerged was a probing examination of queer intimacy through the latter half of the twentieth and the early twenty-first century. Winnowing, not to mention, remembering 100 experiences ended up becoming a kind of personal archeological endeavor. Oremland, as he shows in the film, went through old journals, diary entries, and even phone records to track down people he hadn’t seen in decades, some of whom he’d only met briefly but who’d left a lasting impression on him. Everyone from the Cornish fisherman he met via a phone line to the opera singer whose lithe body he could still remember decades later; from the married man with whom he had a bisexual threesome to the longtime partner with whom he’s built a life.

Intercutting interviews with many of these men with scenes from his own past films and programs, 100 Men tells a rather personal story that cannot help but echo the way attitudes about gay sex have shifted over the past few decades. Oremland was aware that such a venture risks shedding light on an aspect of the gay male community that can, in certain quarters, still elicit not just mere eye rolls but outright disapproval. “I wanted to do something that celebrated,” this kind of free-wheeling sexual freedom, “rather than constantly be judgmental of it.”

But as he found out while showing the film at Outfest in Los Angeles earlier this year, there are those who, even in 2017, bristle at such an open embrace of this brand of sex positivity. Or, in blunter terms, promiscuity. At a reception following the film’s screening, Oremland witnessed a heated debate about the film’s sexual politics between, surprisingly, a group of younger and older gays. Where the older group of gay men seemed to warm up to the kind of history Oremland weaves in his filmwith escapades in dark rooms, in cruising parks, and within the S scenethe younger men tut-tutted what they saw as an irresponsible and outdated vision of gay male life.

“Oh, that was the old days,” Oremland remembers one young gay man saying, “That’s how you had to live back then, but now that we’re accepted, we can be normal.” That word alone sent those around him reeling.

“In a way, he had this romantic ideal that he could now get married and live happily ever after. It’s quite interesting how that attitude seems to be more about the pressure on young people nowadays to conform, maybe even more perhaps than when I was growing up, in a strange sort of way.”

Those generational differences are amply explored in 100 Men. In the film, a young man scoffs at the thought of living in a gay ghetto like the Castro, which has long been a safe haven for young men like Oremland was when he visited San Francisco after growing up in parochial New Zealand, while another almost wistfully talks about wanting to find a boyfriend. The move towards this vision of conformity, which in itself points to the progress certain gay men around the world have fought for, is tempered by the world-weary wisdom proffered by older men in the film. In showing us well-adjusted gay men in their later years (most of whom were surprised by how well they were doing, Oremland admitted), 100 Men forces audiences to reckon with what younger generations can learn from those who have quite literally seen their queer lives bloom with possibilities. 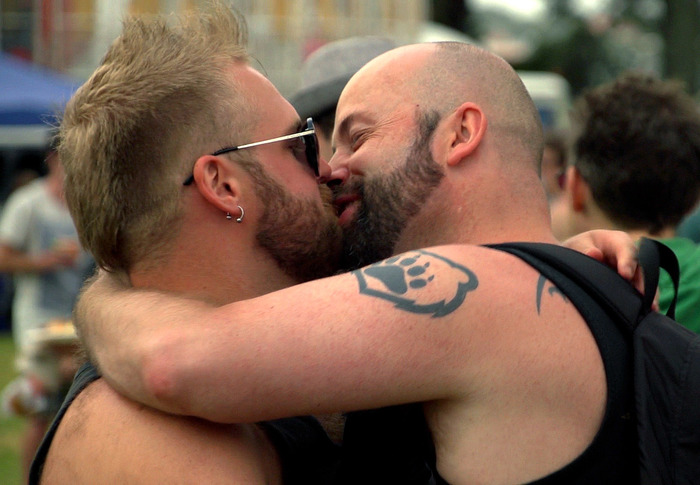 And while promiscuity may be the underlying conceit of the film (to many, 100 men is perhaps too high a number for anyone to boast about), it also speaks to issues of companionship and intimacy that push beyond the limited ideas of coupledom that society at large still celebrates.

“The vast bulk of gay men that I know are in long-term, loving, good relationships. But they are not monogamous. I’m not saying that you can’t have monogamous relationships. It’s certainly not the experience of most of the gay men that I know. It’s important to state this because a lot of young people are going to be sadly disappointed. And in some ways, I understand.

My first boyfriendI thought we were going to live happily ever after in this wonderful, blissful, monogamous relationship. That was a million years ago and I still have that ideal, because that’s what I inherited from my mom and dad.”

Queered ideas of what a couple can look like remain, alas, steeped in judgment. Oremland shared that there had been several men he’d contacted for the doc who refrained from participating. One, in particular, cited his job as an excuse. He’s now a headmaster. And while he’s openly gay, he couldn’t fathom going on camera to talk about past sexual experiences or even discuss his open relationship with his husband. “Look, I wouldn’t want for my work colleagues to know about that,” he told Oremland. Such concern with respectability remains one of the many battles still being waged by gay men around the world.

The closet as we know it may slowly become a relic of the past, but there are new closets the community is still bringing down. And sex, as Oremland’s film and its reaction remind us, is at the very edge of that.