This year, the patriarchy swung about like an untethered wrecking ball, knocking women down with reckless abandon. Amidst this godless free-for-all where men were emboldened to do whatever they wanted, women were left to rise from our own ashes.

The backlash against this unrelenting misogyny was conspicuous, especially in film and television. In 2017, we saw a major increase in female-led content.

While I’m grateful to see stories about powerful women finally being toldand rewarded with massive ticket salesit was discouraging to see that many of this year’s biggest narratives were told by men. Visually, women were at the forefront, but behind the scenes, big jobs like writer, creator, executive producer, and director were still primarily given to menand the irony is gut-wrenching.

Of course, women had some major wins this year. At the 2017 Primetime Emmy awards, Reed Morano won Outstanding Directing for a Drama Series for her work on The Handmaid’s Tale and Lena Waithe made history as the first black woman (and, subsequently, black lesbian) to take home the award for Outstanding Writing for a Comedy Series on Master of None. Reese Witherspoon’sBig Little Lies won Outstanding Limited Series, and the Julia Louis-Dreyfuss-led Veep won in the comedy category.

But when you hold a magnifying glass to this year’s hits, it reveals something rather disturbing; we are being sold feminist stories that benefit the careers of powerful men rather than elevate the marginalized voices depicted on screen. 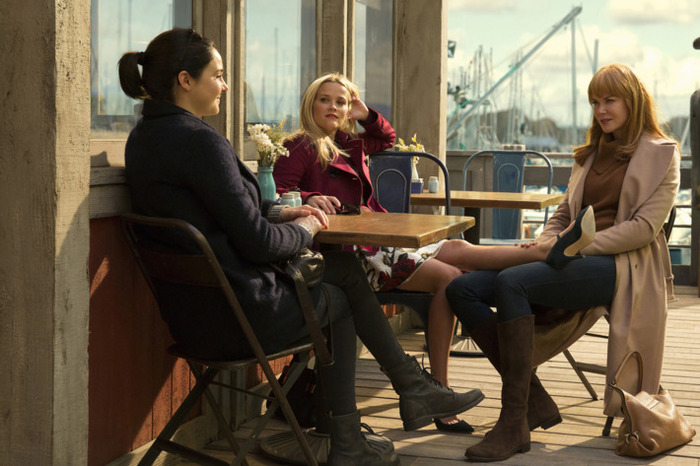 Big Little Lies starred Witherspoon and a slew of other powerful voices like Nicole Kidman, Zoë Kravitz, and Laura Dern, but the show was adapted and created by David E. Kelley. Similarly, The Handmaid’s Tale was adapted and created by Bruce Miller. I’ll always encourage men to help get female-led content made, and men like Bruce Miller and David E. Kelley aren’t stealing the spotlight from the women they collaborated with. But unfortunately, Miller and Kelley fit snugly in a pattern with other male creatorsmost of whom haven’t been as altruistic.

Aaron Sorkin, known for his fast-paced, male-fronted dramas, has been praised for his latest film, Molly’s Game, which tells the story of a nationally ranked skier turned racketeer. The famed screenwriter wrote and directed the film (his directorial debut), and it’s the first time he’s ever written a story led by a female protagonist. The timing is pretty convenient, and Sorkin is a drop in the bucket of male filmmakers reaping the benefits of writing and directing female-forward stories. Positioning themselves as feminist storytellers has been beneficial to their careers, both financially and cosmetically.

Some filmmakers have already generated a significant amount of awards season buzz for such stories. I, Tonya stars Margot Robbie as the nominal Tonya Harding, but was written by Steven Rogers and directed by Craig Gillespie. Three Billboards Outside Ebbing Missouri, starring Frances McDormand as the brutal Mildred Hayes, was written and directed by Martin McDonagh.

Female-led films aren’t just sweeping awards season this yearthey’re also the biggest box office hits. The highest grossing film of the year was Beauty and the Beast starring Emma Watson, and was directed by Bill Condon and written by Stephen Chbosky and Evan Spiliotopoulos. (It’s worth noting, however, both the original tale and the 1991 animated film were written by women.) Following close behind was The Last Jedi starring Daisy Ridley, written and directed by Rian Johnson, which could eclipse Beauty by year’s end.

The Patty Jenkins directed-Wonder Woman took third place and was groundbreaking for many reasons. Most notably, it was the highest grossing live-action female-directed film everbut even Wonder Woman was written by a team of four men and zero women.

Many times, women were included in the writing and directing process, but were paired with or supplemented by men. The Shape of WaterandThe Postwere directed by men.Battle of the Sexeswas written by a man, but directed by a male/female duo but written by a male/female duo. Battle of the Sexes stung a little bit deeper because of its botched and hollow male-written lesbian storyline. Male creators were at the forefront of queer female narratives this year, which was even more disappointing. The Girlfriend Experience on Starz featured a lesbian storyline that was written and directed by a man, as did The Handmaid’s Tale, despite the original pilot having been written by The L Word creator Ilene Chaiken. (She has since distanced herself from the project.)

All of this is not to say men can’t write feminist stories, but in a time when women are fighting tooth and nail to break that glass ceiling, the fact that we’re not being trusted to tell our own stories (or men’s stories) is gutting. To add insult to injury, these powerful men are benefiting greatly from aligning themselves with this now-popular brand of feminism.

In the most harrowing case of the year, Scott Frank’s seven-part Netflix series Godless was promoted as a feminist western, set in a women-only town, and even brandished the slogan “No Man’s Land” on its promotional materials. But when the show aired, fans quickly realized the show wasn’t even about women, nor did it star women, but rather was fronted by male protagonists. But the list of male-created female narratives on television drags on: Feud was created by Ryan Murphy, Jaffe Cohen, and Michael Zam. The Crown was created by Peter Morgan. 13 Reasons Why was adapted and created by Brian Yorkey.

There definitely were exceptions, but they were few and far between. Lady Bird, Professor Marston and the Wonder Women, GLOW, SMILF, Queen Sugar, Alias Grace, and The Marvelous Mrs. Maisel were all written, directed, and created by women, and all drew praise from critics for their nuanced storytelling. I don’t necessarily subscribe to the notion of “stay in your lane” part of me believes anyone can write anything about anyonebut the issue of authenticity remains. 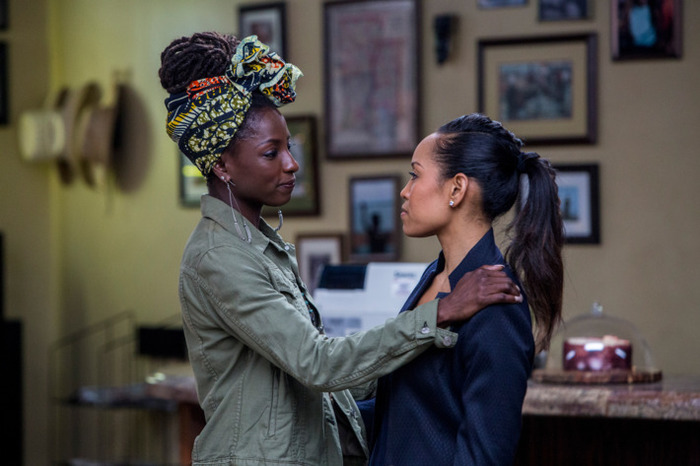 Above all, women should be given more opportunities to be at the top in film and TV. According to Variety, women are still lagging behind in Hollywood leadership roles, especially in film, corporate, and streaming. And while men undoubtedly can and should continue to write female-fronted stories, it’s imperative that they elevate and listen to women in order to gain perspective on the voices they channel.

My hope for 2018 is that, when necessary, men will learn to take the backseat, stop reaping the benefits of feminist narratives, and trust women to tell their own stories.

Images via Hulu, HBO, and OWN