Tension has been bubbling between Cardi B and Nicki Minaj over the last month, ever since TMZ reported that the “Money” rapper threw a shoe at Minaj during the Harper’s Bazaar party. On Monday, the beef between the female MCs hit a boiling point when Minaj alleged that her friend Rah Ali “really, really beat Cardi’s ass bad” during the now-infamous fashion week party in September.

Soon after, Cardi responded with an 11-post Instagram rant, in which she lobbed multiple accusations at Minaj, including that she was offered the Little Mix song, “Woman Like Me,” before Minaj was (Minaj is currently featured on the single). Little Mix then slammed Cardi’s allegation, and by the end of Monday night, Nicki took to Twitter to call a truce between her and the “Bodak Yellow” rapper, which Cardi agreed to accept. However, if I know queer women, and I surely do, then I know that a long-simmering tension between Cardi, a queer female rapper, and her seeming arch nemesis (who isn’t queer, but is probably down), won’t die this easily. So, based on my own experiences with riled queer women, here’s a few ways I see this playing out. 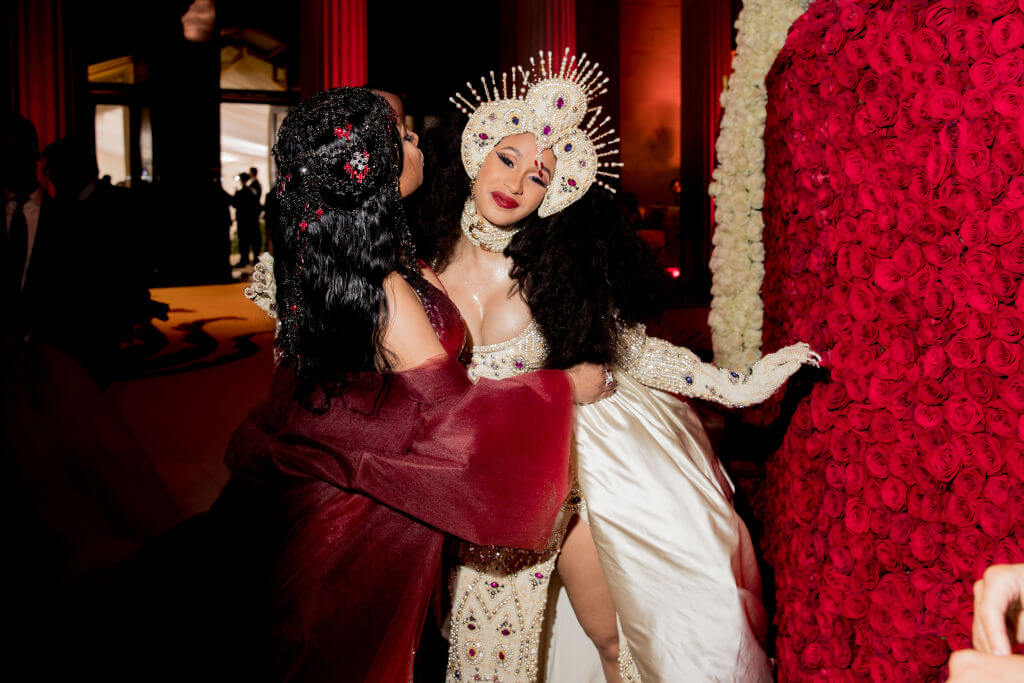 Why dance around it? There are so many ways to settle beefs: in person, in the media, on Twitter dot com, but all of those are dated beef-settling spaces. The most modern and nuanced way to settle a feud is by getting naked. Queer women have a breadth of emotions more complex and expansive than any other faction of the human race. And because our community is significantly smaller than the heterosexual dating landscape, it’s easy for us to meet another queer lady, have an emotional reaction to them—whether it be romantic and tingly or violent disgust—and have sex with them right away, just cause. So, while emotions are running extraordinarily high for Cardi and Nicki, it’s not unreasonable to think that they might get together to fuck it out.

They Fuck and Continue to Feud 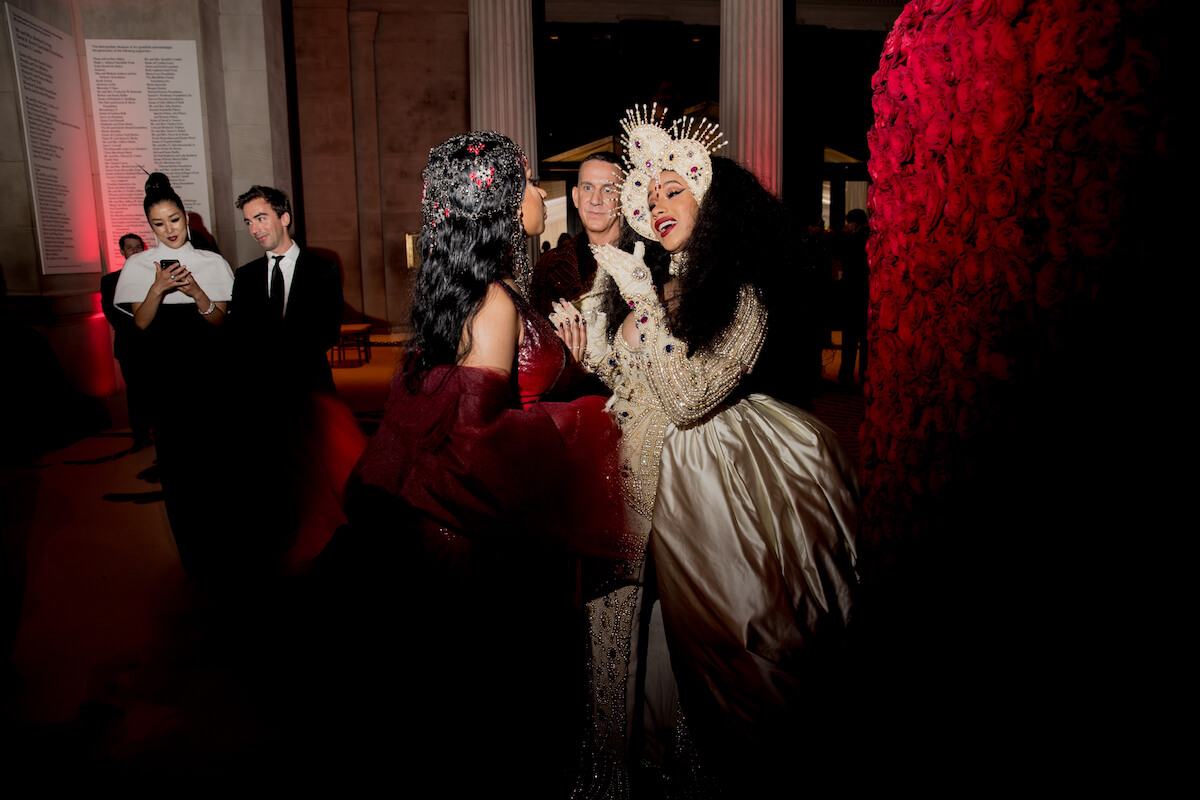 I know fucking often isn’t the answer to our problems. In fact, it often complicates things further. I’m just saying fucking happens. Maybe they jam out with their clams out, realize they have nothing to say to each other during an awkward pillow talk, agree that they actually truly dislike each other as people, and decide to continue being each other’s mortal enemies. After all, this has all been very entertaining. They’re really giving the people what they want, like making girl groups publicly pick a side, and creating the long-prophesied Great American Pop Star Divide.

They Fuck and Fall in Love 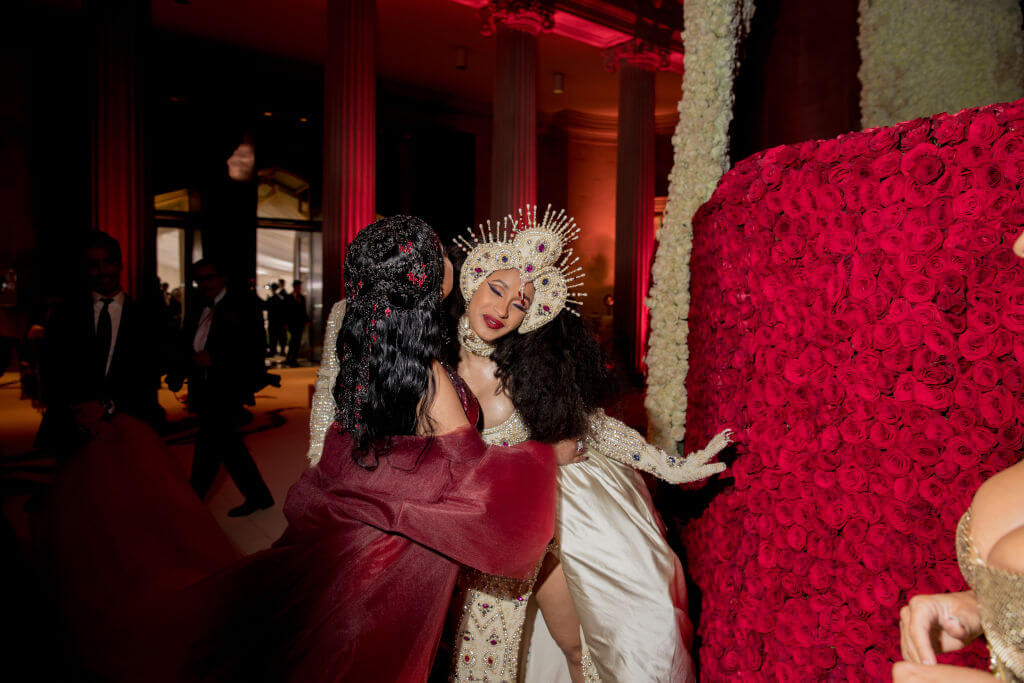 This has happened to me more than once—not fucking and falling in love, but rather, being wholeheartedly disgusted by a person, fucking them in a burst of passion, and then falling head over heels like a bumbling moron for a person I have nothing in common with. Internalized homophobia is a bitch: Right after I came out, or while I was coming to terms with my queerness, I would often self-correct when I found a woman attractive by (metaphorically) giving myself a slap on the wrist. It’s terrible and heartbreaking, but I literally trained myself to find women disgusting, even when I subconsciously enjoyed their company.

This one’s a long shot — and I know Nicki doesn’t identify as queer — but I’m just saying: Maybe the source of all Nicki and Cardi’s tension isn’t album sales or competition or the ways in which the media has historically and unfairly pitted women against each other, especially female rappers. Maybe it’s that, deep down, they’re in love. Duh. I’ve been on lesbian Tumblr, I know how this shit works.

They Have Coffee and Settle This Like Two Emotionally Mature, Level-Headed Contemporaries 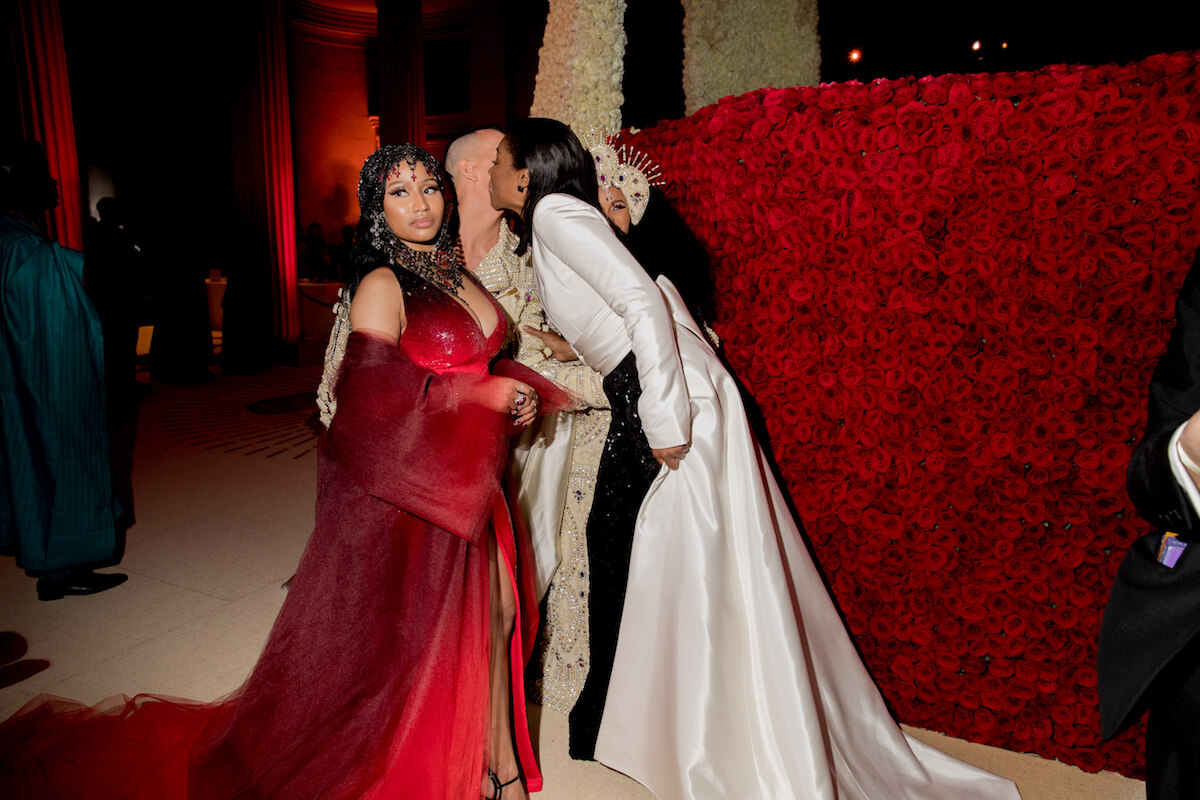 LOL just kidding, can you imagine? Queer women are smart, but level-headed we are not.

This Just Goes Away 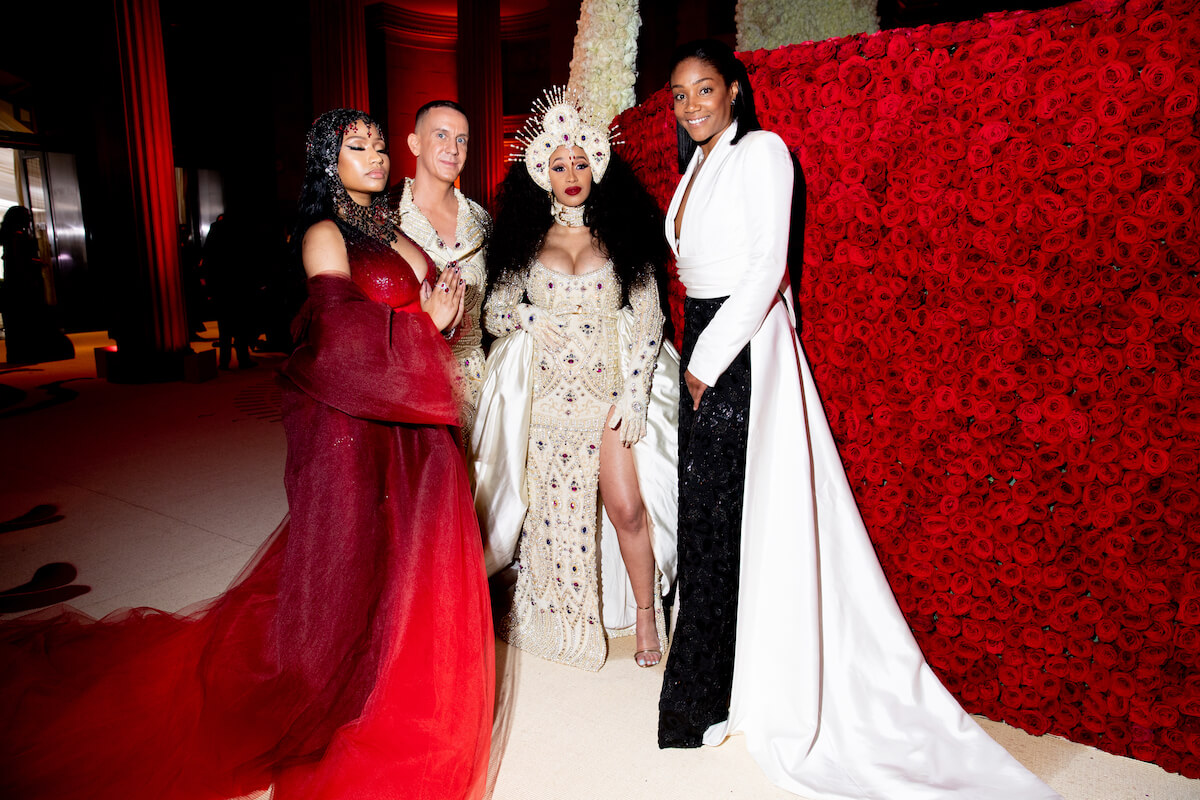 In theory, this could happen — Nicki and Cardi could really call a truce and agree that this is drama they just don’t need in their lives. I’ve done this in breaking up with a girl who was not my girlfriend — because apparently, when you’re gay, you can get dumped without even having a girlfriend. Sometimes, things don’t align as easily as two people may have hoped for, and the platitude “life happens” suddenly makes sense. Unfortunately, many relationships fall apart because the timing isn’t right, or there are unpredictable circumstances that complicate the good stuff — acts of God, if you will. So, maybe it wasn’t in the stars for Nicki and Cardi at this moment in time. It doesn’t mean that, in the future, they can’t mend their relationship and build something cool and new and fun again.

Sadly, this is probably the most unrealistic result of the current feud, because even if the two women agree to disagree, the media will never—like never ever ever—let this go. Like, I’m talking a dystopian E! News broadcast from 2049 where they introduce Cardi B as “the female rapper who once beefed with Nicki Minaj.” Actually, “Nicki Minaj: 2049” sounds much more compelling than that Blade Runner trash. 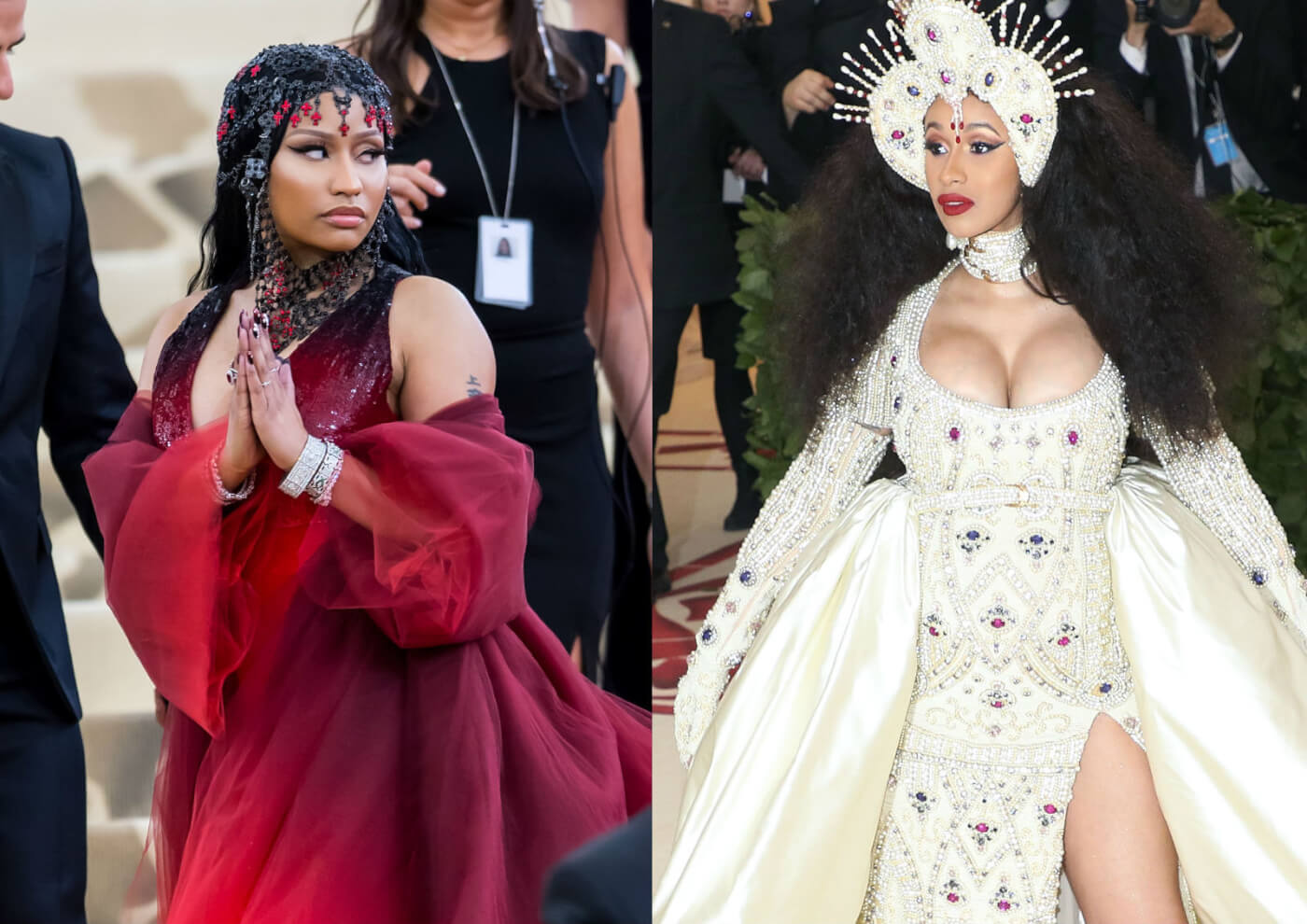 Queer women are many things — intelligent, progressive, unique, beautiful — but we are mostly just petty as fuck. Often times, when a lesbian couple breaks up, it splits a friend group in two, even if it doesn’t happen right away. Sometimes the bitterness of the break up creeps up on those not involved in insidious ways, and months, even years later, you find yourself resenting one of the women involved because of the poison the other has been spilling in your ear since the breakup.

Little Mix already picked a side, and Ariana Grande, a long-time collaborator of Minaj, “liked” Little Mix’s pro-Nicki post on Instagram. By this time next year, who knows what kind of bipartisan popstar hellscape we’ll be living in? Will “Taki Taki” collaborator Selena Gomez go Team Cardi? Will queer R&B singer and public Cardi stan Kehlani swing Cardi? Will SZA be caught in the middle? Will “Swish, Swish” singer Katy Perry lobby for Nicki visibility? Will male rappers somehow escape being accused of siding with either woman because men in the music industry aren’t ever held accountable for their actions, nor are they targeted by the media as subjects of a sexist “claws out” blood feud?

Well, I don’t want to be around to find out. I’m going with “They fuck.”