I spend a lot of my time tweeting out-of-context thoughts I have on The L Word. Although the show ended in 2009, in my lesbian brain it’s kind of perpetually on a loop and so naturally I am constantly coming up with hot takes in my day to day life, while I am buying groceries or in between running into every bad Tinder date I’ve been on at my local farmer’s market. It eventually dawned on me that there’s nothing lesbians love more than astrology and nothing we hate to love more than The L Word. Synthesizing the two feels like the best worst thing to do for our community, so I’m sorry and you’re welcome. I have consulted with several highbrow astrology dykes who chose to remain anonymous as to avoid backlash but I stand by this. I tried my best to impartially drag everyone equally.

Bettes are caretakers. They’re extremely family oriented which is why they do things like kidnap their kid from their ex. They also have idealized versions of everyone around them and when things stray from that conception or they’re not getting the attention they think they deserve, they lash out. When a Bette gets emotional, it’s hard to tell if they’re sincere about their mistakes or if they’re just willing to do anything for attention. This is unclear both to the people in their life and to themselves.

Tinas love authenticity. They’re obsessed with being extremely intimate with people in their lives but that also means that they get bored easily. They fall deep at the start and then move on to the next and they will try to victimize themselves to feel better about leaving people out to dry. All that matters to a Tina is their personal success and fulfillment. That leads to the kind of emotional messiness that makes you become the mistress of your ex that you broke up with because they cheated on you.

Shanes are extremely confident. However, that’s a mask for the insecurities that lead them to ruin all the relationships they’re in. Learning from their mistakes is not something that ever occurs to them. They are well-meaning and a good friend but consistently tactless. This could manifest itself in doing things like dating your best friend because she’s sad and then cheating on her with her ex.

Jennys are very passionate about their work. The only thing they love more is attention. Their fake humility is extremely transparent and pales in comparison to the extensive effort they put into being perceived as confident, a side effect of their innate narcissism. Try to curtail a Jenny’s spotlight and they might essentially murder a dog in order to try and sleep with your perfect veterinarian girlfriend. Hell hath no fury like a Jenny denied the praise and attention they’ve convinced themselves they deserve merely for existing.

Alices are known for their wit and intellect. They’re also known for sacrificing common courtesy and sensitivity for the sake of a joke. Their sanity is constantly hanging by a thread because they take everything so personally. The slightest miscommunication or heartbreak could launch them into an insane tirade that includes a cardboard cutout of their ex and as well as a dedicated shrine. Alices have a non-existent filter when it comes to other people’s feelings but insist everyone tread lightly around theirs.

Everyone loves Danas. This might be because they are pleasers that refuse to be outright and authentic but actively go to extreme lengths to keep the peace. Their reluctance to be real with people about how they feel often puts them in uncomfortable situations like staying with a fiancee who is bent on throwing the first ever corporate sponsored lesbian wedding.

Carmens make friends better than most people. They also change their mind more than anyone else. Although they come off as relaxed and easygoing, most of the time they are balls of uncertainty. This makes them extremely unpredictable and sometimes impulsive. Watch out for the Carmen in your life trying to get your attention by sleeping with your roommate — she might be in love with you.

Helenas are strong and confident. When things are going well this manifests itself in them being controlling of every person in their life. Helenas don’t really care about the people they’re in relationships with that deeply, they care about looking human in the face of criticism that they’re cold calculated robots that seem to constantly forget they have kids.

Papis are loyal friends. Besides that, all they do is use sex as a buffer against being real with people. Everything about Papis is a performance, including that supposed irresistible charm. They love being loved and will really lean into whatever it is they think makes them special and make that their entire personality. They do nonsensical things like fall in love with Kit for some reason.

Tashas love simplicity. That means removing any nuance from every conversation you have with them is the only way they won’t get frustrated. They are almost impossible to persuade. Even when they’re wrong they will not budge which is why even as a black lesbian they refused to hear anyone’s criticism of Bush and his war in Iraq which never really made sense to me, but whatever.

Marinas are fascinating. They’re always on the move because sitting down with their thoughts is way too daunting for them. When it comes to dealing with the consequences of their actions, like say ruining a seemingly innocent straight girl’s life, they tend to just disappear and return at their convenience. For Marinas, the fact that they don’t ever acknowledge how they messed up means they never have to apologize.

Laras wants to fix people. Dating your dead ex-girlfriend’s ex-girlfriend is their version of being helpful and that helpfulness can come off as overbearing and annoying because well, it sometimes is. There’s a level of agreeable that comes off as boring and Laras for sure reach it. Laras are loyal so you can rest assured knowing they’ll always be there to annoy you just a little bit.

As an Alice sun, Lara moon, and Jenny rising, I fully acknowledge that I’m a mess. Share yours on social media #lwordastrology. 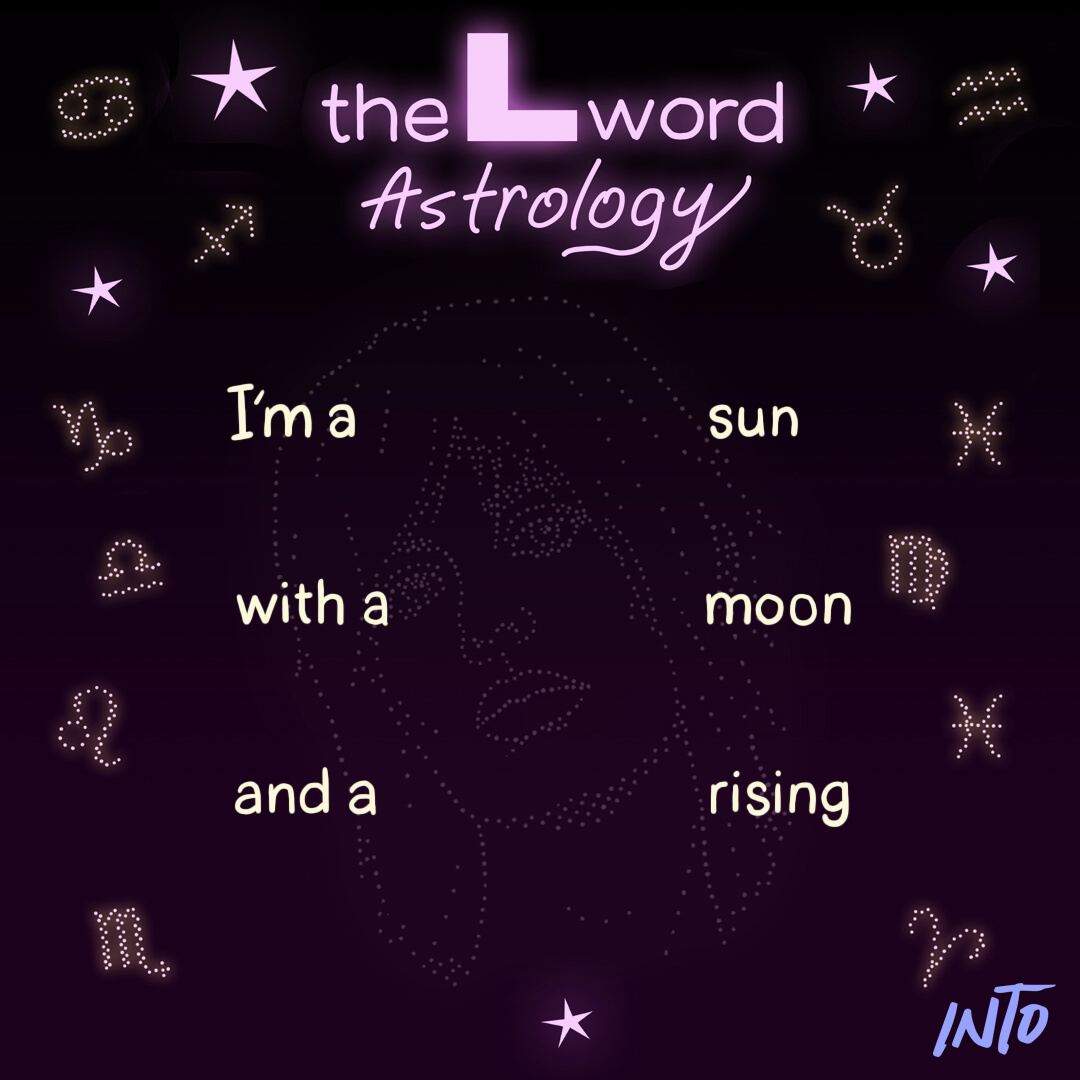