While drag has been mainstreamed over the last decade, there’s another cabaret art form that has strong roots in the queer community, but does not get talked about nearly as much: burlesque.

Besides Dita von Teese and the 2010 Cher and Christina Aguilera film, we don’t hear a lot about burlesque in popular culture, but that doesn’t mean the scene isn’t there. In fact, there is an international burlesque scene with events around the world, with the new annual International Burlesque Faire starting in Philadelphia this year.

Also similar to drag, we rarely hear about performers that have ethnic backgrounds from the Middle East or South Asia. Enter Bollywood Ken, King of Bollywood Burlesque.

Ken is a native New Yorker, born and raised in Jackson Heights, Queens, an area sometimes referred to as “Little India” because of its large South Asian population. As Ken described to me, he is one of the few South Asians in burlesque — one of only a handful in the international scene. 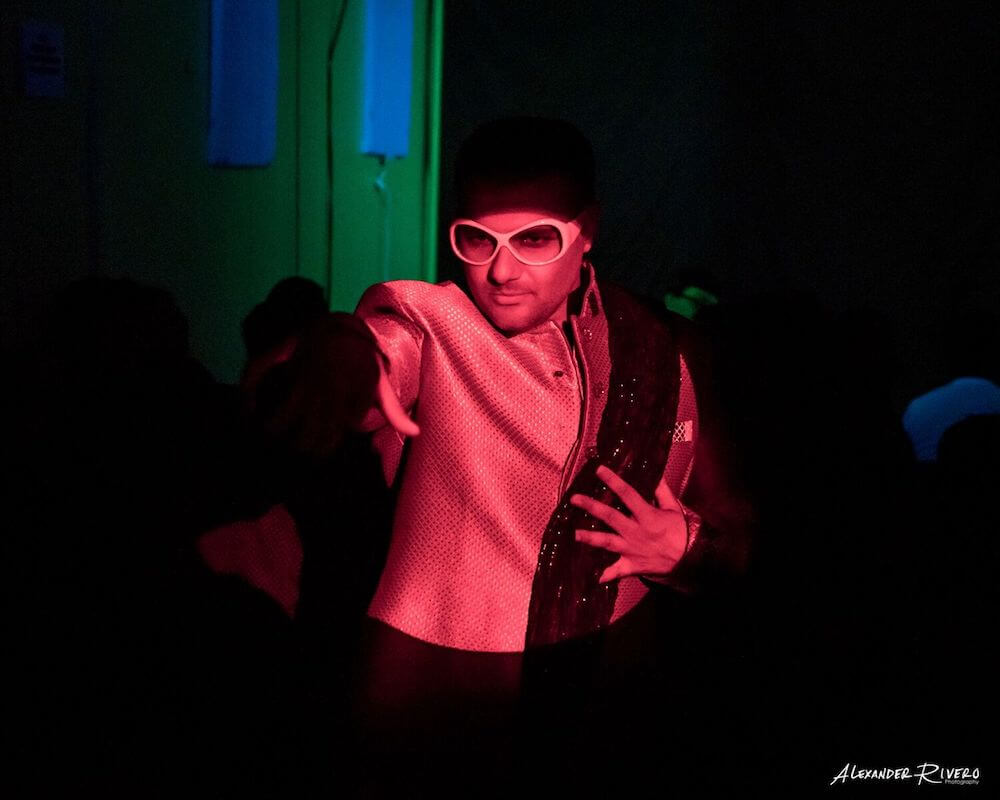 I was lucky enough to talk to Ken about his experience in the scene and his unique culturally-infused performances.

Can you tell me a little bit about how you started doing burlesque?

I’ve been working in nightlife my entire adult life as a musician and DJ. My band Naked Highway has produced many remixes over the years, most recently for Fischerspooner, Peppermint, and Adam Joseph. But my nightlife journey began as a go-go boy, which I did partially to make extra money while I was in college, but mainly to get paid to party haha.

Thanks to the magic of photo tagging on Facebook, my burlesque friends learned of my go-go past and encouraged me to give it a try. I’ve done audio production and editing work for loads of drag queens and burlesque performers so some of my friends are quite prominent in the scene — and that was my ticket in!

You mention having an ethnic-based act. Was it always that way or did Bollywood Ken come later?

Well, the way I arrived at the character of Bollywood Ken was a bit of a journey. Originally I had intended my burlesque identity to be a Tom of Finland leather daddy type of character — Lord knows I have all the necessary gear! But when I started to formulate the act, I realized such a character would’ve been pretty one-dimensional and let’s face it: it’s been done a million times.  I had to do a bit of soul searching to create a persona that was authentic to me.

A fellow South Asian friend suggested I do something based on our culture. One day I was trying on traditional Desi outfits in Jackson Heights and when I came out of the dressing room, a woman shrieked “Oh my god you look like a Bollywood Ken doll,” and Bollywood Ken was born.

And what does that entail in your performance? Do you perform to Bollywood music?

The premise of my act is that I come out dressed primarily in traditional Indian and/or South Asian garments, which includes kurtas, turbans and a variety of scarves — many of which are hand-me-downs from family members!

And then I strip to Bollywood and/or Bhangra music. For my most recent performance, I danced to a Punjabi heavy metal song! Yes, there is a heavy metal scene in India! In the future, I will also perform to my own Bollywood remixes of western pop songs. 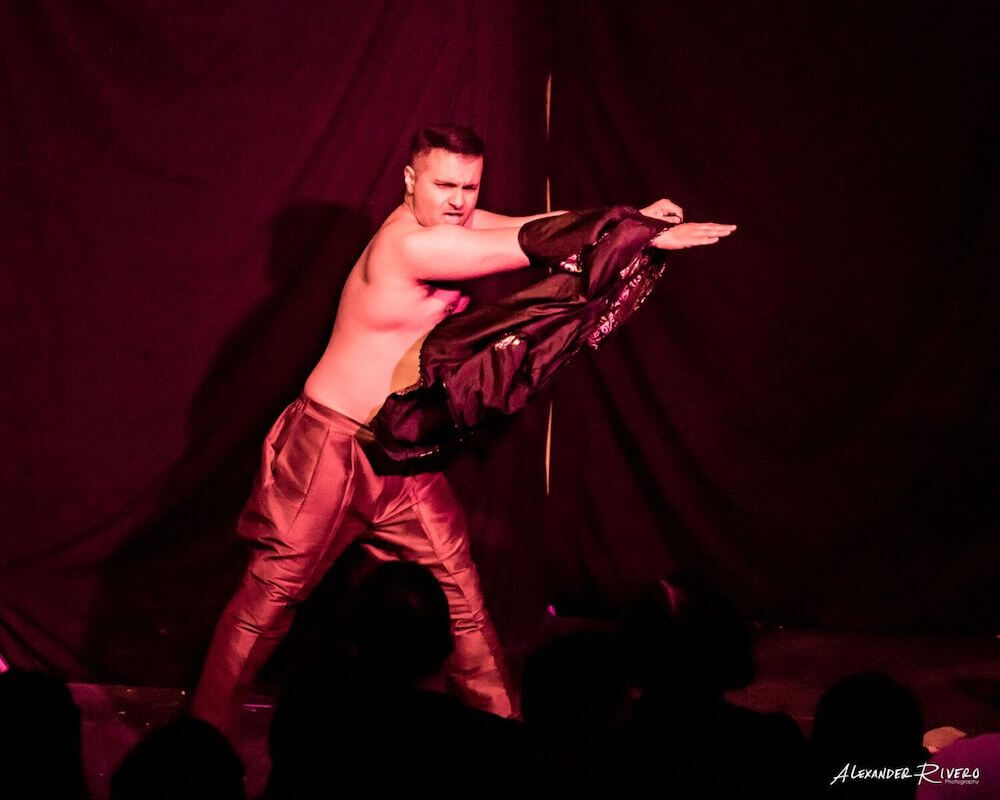 What has been the reaction from your performances?

The reaction has been overwhelmingly positive across the board. For a western audience, not only do they get to see a hot guy take off his clothes, they get the added benefit of a cultural exchange — they hear music they normally wouldn’t be exposed to. Hopefully, they get to see South Asian men in a different light. One of my signature moves that I do is the “turban reveal,” where I very slowly and sensually remove my turban. I don’t do it every time but when I do it’s a definite showstopper.

Even though South Asians have had increased exposure in western media in recent years, Asians in general still face a lot of sexual prejudice within the LGBTQ community disguised as “preference” — I want to destroy these long-held misconceptions. Asian men are sexy. Period.

I’ve had several audience members tell me that they never considered a turban or kurta to be sexy until they saw one of my shows.

Has it been different between white people and people of color?

For people of color, especially South Asians, it’s a chance for them to feel represented. Recently I performed at Folsom Street East, and after my act, I spoke to several LGBTQ South Asians who were in the audience. They all talked about how South Asians are almost never represented at any major LGBTQ events, and for someone like me to perform at such a festival meant a lot to them — it really touched my heart in a big way.

Burlesque for me was always just a means to tap into another part of my creativity, but I’ve quickly come to realize that me doing what I’m doing is very important for a lot of people.

On a related note, have you faced any discrimination in the LGBTQ burlesque scene?

Luckily I haven’t. The burlesque scene tends to lean left and the producers I’ve worked with have made cultural diversity a selling point for their shows, so I’m a dream come true for them.  What I do isn’t traditional burlesque and I understand that. Also, I’m a male performer in a predominantly female-focused art form, so I understand that, too.

I’m not everyone’s cup of tea and that’s okay! But because my act is unique, I draw many people who normally wouldn’t attend a burlesque show. And ticket sales are more important than someone’s personal prejudices so I have that working in my favor.

I usually show up to gigs in full makeup and costume just because I like getting dressed at home, so I do hear the occasional racist comment on the street, however. 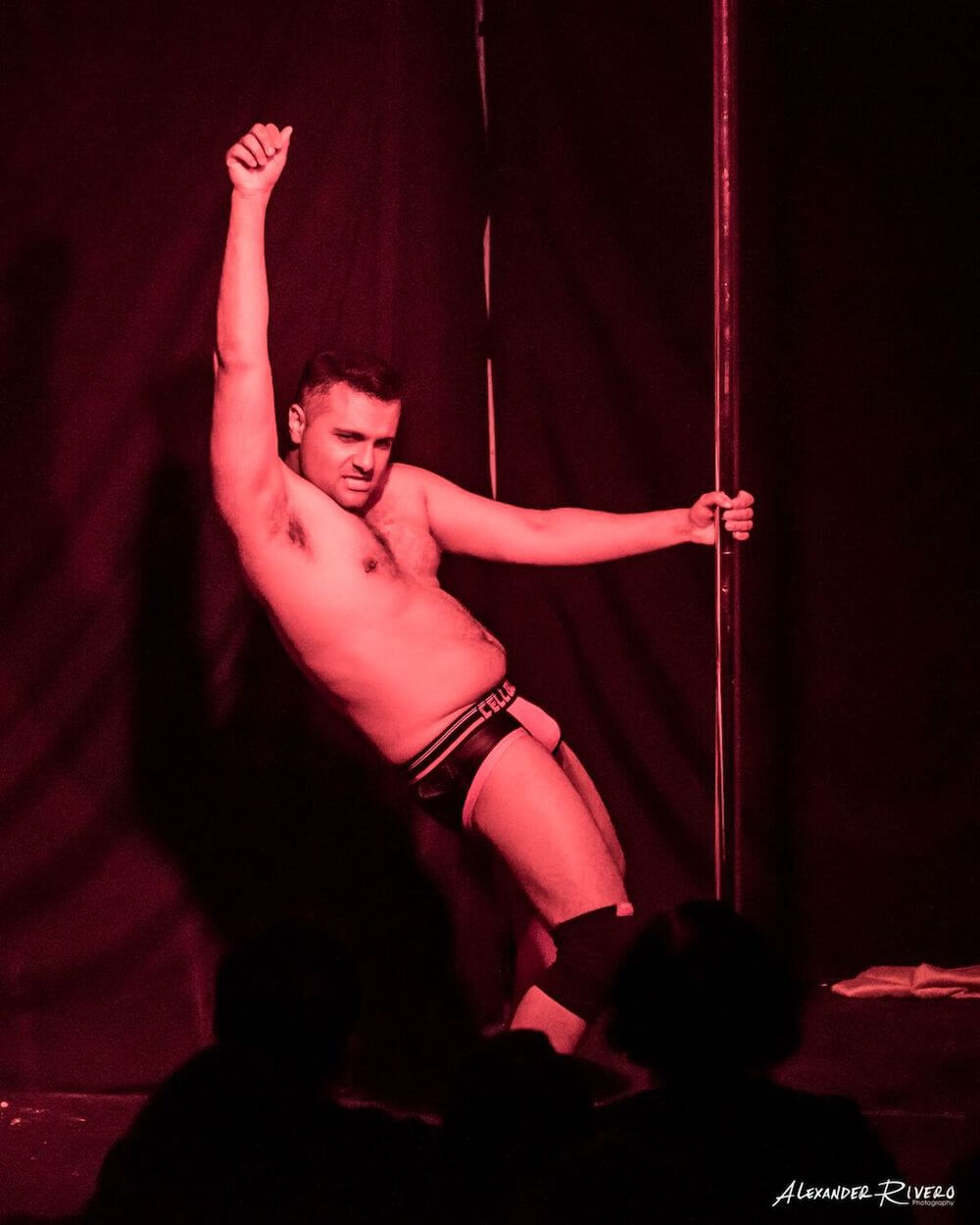 I’m Middle Eastern and I’ve noticed that there is a distinct lack of representation of LGBTQ Middle Eastern/South Asian people in the queer performance community — burlesque, drag, etc. Do you think that indicates something about the cultural differences of the region?

Family life and parental acceptance [are] very important in Asian cultures, so to be disowned or disapproved of by one’s family for being LGBTQ is devastating. To then come to, and in many cases, escape to a city like New York only to find that you’re not represented, and even discriminated against from within the LGBTQ community is a further crushing blow. So as a performer, if I can provide some sort of feeling of relief, acceptance, validation or representation I’m glad to do it.

Also in Bollywood specifically, there is the sort of “keep everything behind closed doors” attitude towards sexuality. Sex or love in many Bollywood movies is sometimes only represented by the songs.  It’s kind of crazy that the culture that gave us the Kama Sutra also has an issue with sexual repression — I think this sexual repression prevents many from the community from pursuing drag or burlesque.

It’s unfortunate because there are way hotter guys that are better dancers than me who could be and should be doing Bollywood Burlesque, but are not.  I’ve even choreographed a couple of duet/group numbers but cannot find anyone to do them with me!

What does it mean to you to be one of the only South Asians in this scene?

Whenever you’re one of the few, or the only person from a certain ethnic/social group in a particular scene, you inadvertently become the representative for the entire culture — which is a very tough position to be in, but I’m owning it — that’s why I’m the King of Bollywood Burlesque!

My hope is that I won’t always be one of the very few South Asian performers in the burlesque community or in the drag community etc…that more people of color will be inspired to perform.  If anything this whole experience has opened my eyes. Growing up, the only representation I had in popular culture of myself were Apu from The Simpsons and Tony Kanal from No Doubt.

I just sort of accepted that that’s the way things were, but now I realize that this lack of representation probably caused a lot of my own insecurities and feeling of worthlessness as a kid. I want more South Asian people to get involved in nightlife/entertainment/etc so that the next generation doesn’t have to deal with those same sort of insecurities. And besides, you know we like to make things spicy!

You mentioned discovering a new appreciation for your own culture by doing Bollywood burlesque. Can you expand on that thought?

A lot of second generation or third generation Asian kids in this country are caught in the struggle of trying to prove their “American-ness” to their peers while trying to stay true to their family’s culture. Even growing up in a diverse place like New York City, I faced a lot of racism and discrimination from my peers – which is why my nose isn’t exactly straight because I used to get into tons of fights haha!

It’s a devastating position for a child or teenager to be in — to be born and raised in the United States and not be considered “American” because you’re not white — and also not being Asian enough because you were born in the USA — you’re kind of stuck in a sort of limbo, which can be very lonely.  Therefore, I always viewed Bollywood as something that was like “Oh, that’s my parents’ music” — I would shun Bollywood movies and music because I felt that liking them would make me seem less American.

After my burlesque debut was such a success, I had to do more research to perfect my act.  So I started taking Bhangra and Bollywood dance classes and getting more involved in the South Asian community in New York. I’ve made so many new friends and have finally realized how lucky I am to be a part of it.   It’s always amazing to learn about and discover a new culture and even more rewarding when that culture is your own. Doing so has even allowed me to become ever so slightly closer to my family, because now I can talk to my parents about Bollywood & Bhangra music. Of course, they’re not happy about me being a burlesque dancer but that’s another issue. 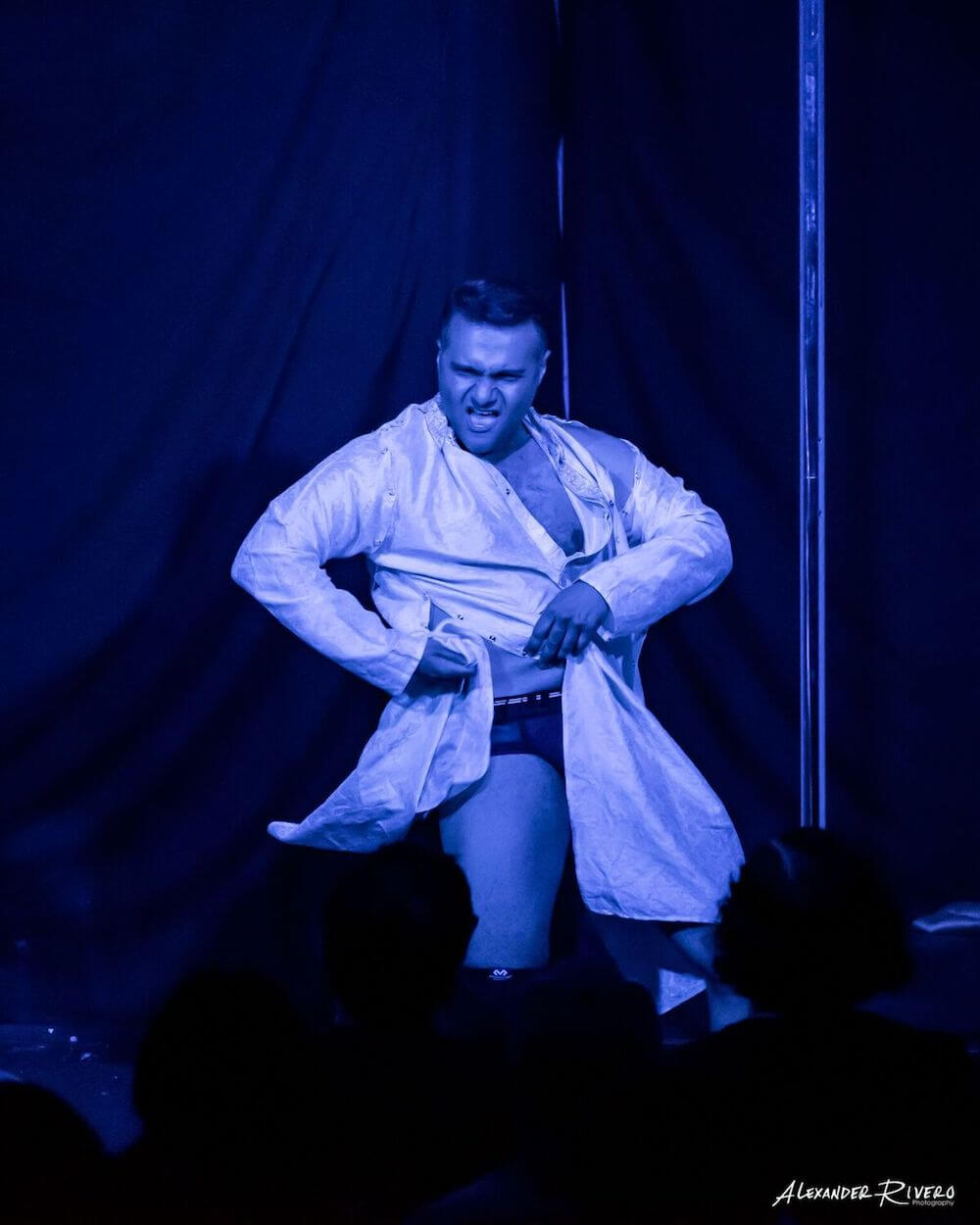 What are your career and personal goals as a burlesque dancer? What do you see in your future?

My getting into burlesque was a complete accident; it was essentially done on a dare. Therefore, my success has been a big surprise so I’m taking it day by day.

The week after my Folsom Street performance I received 1100+ friend requests on Facebook and all sorts of national bookings opportunities via email and other social media platforms. I’ve added pole dancing to my repertoire so I’m peppering my act with some of that.

Since I am a musician by trade, I’d like to eventually record a couple of Hindi or Punjabi tracks as Bollywood Ken and put out at least a single. I’ve recorded some demos but people have told me that my accent is too American sounding. Oh, the irony!

This interview has been edited for clarity and brevity.