What is Wonderstruck?
Gay auteur director Todd Haynes the visionary behind movies like Far From Heaven and Carol is back with a story about communication. Well, two stories, actually. Wonderstruck weaves two separate storylines together, one that follows a deaf girl named Rose (Millicent Simmonds) in the 1920s, and another that follows a hearing boy named Ben (Oakes Fegley) in the 1970s. Both are curators of culture in their own way, with Ben collecting everything he can find and Rose taking in movies, especially those starring silent film star Lillian Mayhew (Julianne Moore).

The film, based on Brian Selznick’s book of the same name, takes a turn when an accident takes Ben’s hearing, too. The two stories find the characters exploring New York in their individual times Rose seeking connection with her mother, and Ben trying to find the father his recently deceased mother would never tell him about. It all comes to a head when the stories intersect, in a sequence so moving, it’s worth the price of admission for it alone.

Who’s in it?
Moore, Haynes’ Far From Heaven star, plays both Lillian and the elder version of Rose. She’s the big draw, although Michelle Williams does appear in a couple of scenes as Ben’s mom, Elaine. (Honestly, between this and Manchester by the Sea, we’re worried about this Williams screentime shortage in Amazon Studios movies.) 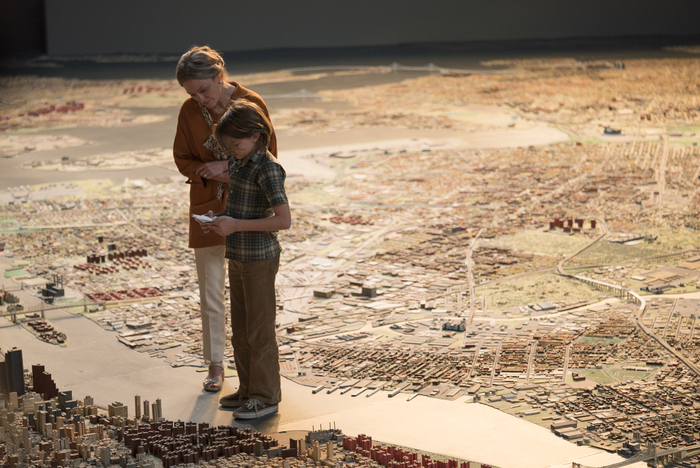 Why should I see it?
That scene I mentioned earlier, where the stories intersect? That is the reason to see Wonderstruck. Unfortunately, despite some truly beautiful music and shots, this is a bit of a step down for Haynes post-Carol. Asking a director to follow a masterpiece with another masterpiece is a hell of a demand, but it’s hard not to feel disappointed. Still, it’s not bad by any measure just a little shallow, as the ‘20s story ultimately leads nowhere and the ‘70s story drags its feet until getting good.

But how gay is it?
Haynes in the director’s chair is basically where this movie’s gayness begins and ends. Though Ben does develop a cute friendship with another boy, Jamie (Jaden Michael), it’s pretty simple, and definitely secondary to the overarching story. The mere presence of living legend Julianne Moore can’t even gay up the place; she gets a couple of nice moments, but it’s hardly a showcase deserving of her talent.

Does Rooney Mara show up as an older version of Therese from Carol, revealed to be in a relationship with the elder Rose, thus putting this movie firmly in the Carolverse?
That’s a very specific question. But no. She does not.

Does Carol herself show up, in a Cate Blanchett cameo?
You know Todd Haynes made other movies before Carol, right? Anyway, no she doesn’t.

Isn’t Cory Michael Smith, the cute guy from Gotham, in this? That’s pretty gay, right? Indeed, Edward Nygma himself is in this film, but gets relatively little to do as Rose’s brother Walter. Tom Noonan plays the elder version of his character, and gets the bulk of Walter’s story (slim already).

Wonderstruck is in theaters now.