Cameron Esposito is the kind of stand-up comic who isn’t just looking for laughs. Instead, she’s hoping to engage and challenge her audience.

And she’s not just speaking to an echo chamber, either. Too many times, comics who come from marginalized communities (Esposito is both a woman and a queer person), are assumed to be preaching to a limited choir, as if the rest of the world couldn’t possibly get her jokes.

So when she titled her latest special Rape Jokes, she was hoping for as many different types of reactions and questions a broad audience could have. An hour-long set dedicated to sexual assault, Esposito’s Rape Jokes is a sendup of both comedy and sexual assault, and the flippant way society at large has treated conversations about sexual assault. Having seen her peers use rape as a punchline far too often,  Esposito is already uniquely qualified to speak on such a stage. But in Rape Jokes she also reveals she, too, is a survivor, and how that, sadly, isn’t quite a distinctive position.

“What I saw was an opportunity,” Esposito tells INTO, “where nothing has ever been called Rape Jokes. I was like ‘If I just titled it that’–which by the way I was super nervous about because it’s an inflammatory title–then maybe that will be like the number one result if you googled ‘rape joke.’ That would mean the number one result would be a well-structured, personal set from somebody who’s trying to invite you into their experience, and even if you know it’s just one small thing that you can do, you’re just trying to get in the way any way you can.” 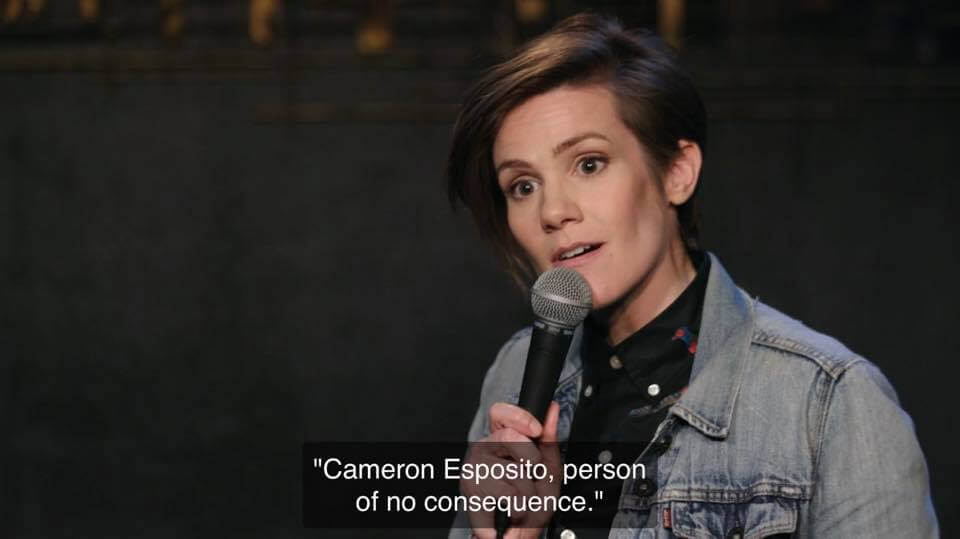 “Getting in the way” of harassers and assaulters is part of Esposito’s messaging in her at times hilarious, other times quite harrowing set about her own assault. The set also contains well-crafted (and expertly delivered) points on modern rape culture and patriarchal power dynamics. And she doesn’t just want women to get in the way–she’s calling on the men in her audience to do the same.

“I think we talk about sexual assault like men feel one way about it and women feel one way about it,” she says. “If you are an alien and you landed on this planet and you read our newspapers, it would almost seem like [men] don’t give a shit about this. I will say you know, in my life and the people I know, comics that are my friends and the men that are my friends, that’s not true. They aren’t just like dudes running around being like ‘I don’t give a shit about this.’ That’s not true.”

Still, opening up your own trauma on stage can be difficult in front of any audience, even if it’s in the name of activism or educational comedy, or both. For that reason, Esposito has released Rape Jokes for free on her website for a limited time, accompanied by a request for donations to the sexual abuse and assault non-profit RAINN. So far, they’ve received more than $30,000 from those who have watched and enjoyed Rape Jokes.

“I mean, it sucked to talk about it,” Esposito says of her assault. “It did. 100 percent. It sucked. It sucked to not get laughs for a couple minutes because I don’t think it’s funny. It shouldn’t get laughs but…as a comic, you’re so used to getting laughs. I wasn’t comfortable with that.”

Outside of a few live dates this summer, Esposito doesn’t plan to tour with the material from Rape Jokes. Instead, it’s a singular project that she hopes made a mark in a way that she needn’t return to, save for perhaps a few jokes that might continue to resonate without her having to go into her personal history with assault.

“I went out to lunch with a good friend who saw it in LA, and she was like ‘It’s incredible, it’s amazing.’  And then she was like ‘Please stop doing this. Please don’t do this forever. Please put a time limit on this because I just think this seems too much for anybody to be doing as their main artistic outlet,'” Esposito says. “And I agree. I think that’s right on the money. So I did it for six months, you know. And I did it really hard. I probably did the set 50 times or something like that and then now it’s out there and that’s good. I’m happy to be doing press. I’m happy to be talking to you. And then I’m going to be happy not to be doing that and to be going back into what is my daily life.”

Which isn’t to say Esposito is backing away from difficult or trying topics. She’s often talking about her identity as a queer person, which is another reason Rape Jokes is so important in the cultural conversation around sexual assault and harassment. Too often, LGBTQ people are left out of these discussions, as if they are heterosexual-specific. Esposito’s story will resonate with many others in the community, as has her continued willingness to own her lesbianism even when others try to use it to discredit her. She’s already dealt with that in her life–she grew up in the Catholic church.

“I really think that the queerness is so baked into my story, and I mean it’s set up that way on purpose,” she says. “That’s really what I believe. My growing up in a state that didn’t allow me at all to connect with myself absolutely created the conditions for my assault to happen. “

So part of what she’s hoping to do now, as an established voice in both comedy and the LGBTQ community, is to help empower those who might be in similar situations to the isolating ones she herself grew up in.

“I’m kind of at a place in my life where I feel almost parental in our community,” she says. “I’m not like old enough to even feel parental to folks I feel parental toward, but because we are a family that goes generationally. What I’d hope is that is a young queer person would see this special. We haven’t been able to be out, queer, and speak to our own communities; or be out, queer, and speak to straight people and be like ‘We have a lot of knowledge on equity in relationships. Would you like to know something about that?'”

The shared experience of queer people, of women, and of an American society now finally having a conversation about sexual assault and harassment and coercion is something Esposito finds especially relevant to speak about on the public platform she’s created.

“I really think especially queer folks that are cultured female in our youth, this is something that we should start talking about because this experience of being available to not just a [man] but to society; we were taught that and shamed when you weren’t available,” she says. “That’s a huge part of our identity. I don’t really know what to do with all that pain. I don’t know what we’re going to do with all that, but it is a communal experience and something that a lot of us share. I know that this is something that we’ve  been told to keep quiet about. We ’re cultured to be available to men and then realized that we didn’t want to be available. That’s a huge thing that we can’t even acknowledge without being angry lesbians. I guess I’m just here to say like you’re not a weirdo, little gay kid. You’re not a weirdo, queer adult.”

As for those who aren’t queer kids or adults, she hopes that Rape Jokes reaches them, too.

“I also hope that young men would see this special because I think that there are so many young men right now that I see being like, ‘Well, I don’t know what to do,'” Esposito says. “And I would love to speak with that guy. Because I have information.”